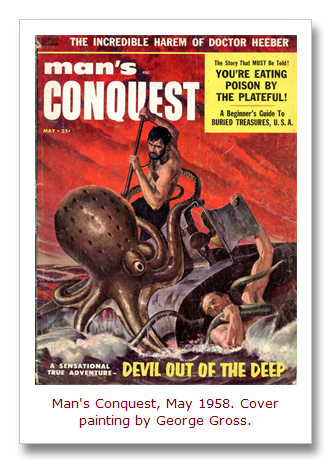 I know that an octopus is a generally shy creature that is very unlikely to attack a human.

But when I was a kid in the 1950s, some of my favorite vintage movies and TV show episodes had scenes with an attack by a large or even monstrous octopus.

In most of them, the octopus was laughably fake and cheesy. But the idea of giant killer octopus was kind of cool and creepy.

You can (and should) read more about each of them on the terrific website “Field Guide to Wild American PULP ARTISTS,” created by artist David Saunders, son of artist Norman Saunders.

My personal favorite giant octopus attack cover painting is the one done by George Gross for the May 1958 issue of Man’s Conquest magazine.

It’s as rip-snortingly cool as the killer crocodile cover painting he did for the January 1958 issue of Man’s Conquest, which I featured in a previous post.

As a scuba diver, I also love the divers vs. octopus scene that artist Clarence Doore created for the February 1858 issue of Real Men magazine, shown below.

And, of course, any fan of men’s adventure magazines can appreciate the classic combination of the heroic manly man and a scantily-clad babe being attacked by a dangerous creature on the cover of the October 1956 issue of Men’s Pictorial. That one was painted by the great Walter Popp. 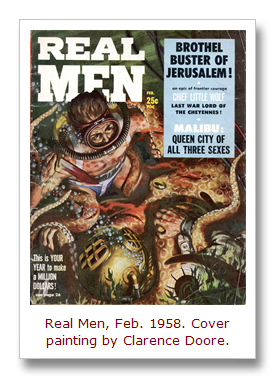 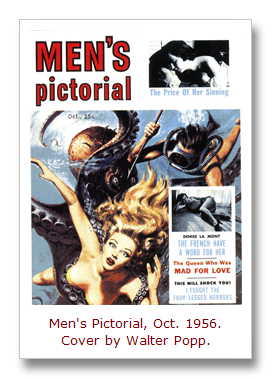