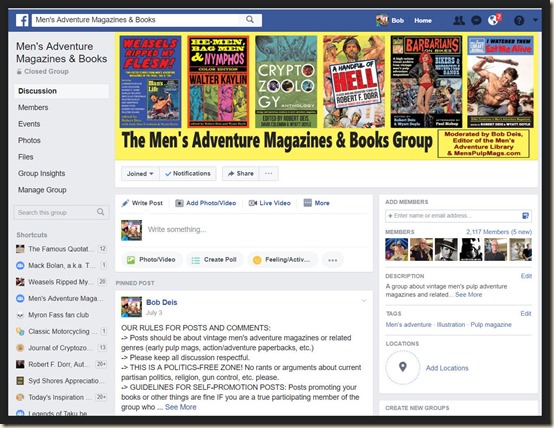 Back in 2010, I created a Facebook group as a spinoff of this blog. It’s called the Men’s Adventure Magazines & Books Group.

Given the sometimes politically incorrect content in the men’s adventure realm, I made it a “closed group” that requires members to ask to join, as opposed to a public group that allows anyone to see the posts.

Year by year, the group has grown steadily.

It now has more than 2,100 members from all over the world, including fans of men’s adventure mags, early pulp mags, vintage illustration art, action/adventure novels and related genres.

In recent years, such Facebook groups have tended to become more popular and more widely viewed than serial blogs like MensPulpMags.com, and I’ve found myself following that trend.

My posts here have become less frequent. I generally use the blog for in-depth posts.

Each day, there are also posts by other members of the group, a diverse bunch that includes casual fans, hard core collectors, and an amazing number of talented artists, writers and indie publishers.

In case you’re not a member of the group yet, I invite you to join us.

Wayne Keil, owner of Hooked on Books, an Illinois bookstore that also offers thousands of used and collectible books on Amazon, recently posted a photo of a cool original painting by Mort Kunstler.

Wayne had noticed that the painting had just been listed for sale by Taraba Illustration Art, one of the best sources for original 20th Century illustration art.

The Taraba folks knew the Kunstler painting had been used in an issue of STAG for a story titled “MY LIFE WITH NEW GUINEA’S AMAZON WOMEN,” but didn’t know which issue it appeared in.

Because I have an extensive digitized database of men’s adventure magazine contents pages, I was able to ID the issue as STAG, September 1957.

Then I posted a scan of the two-page spread from that issue. 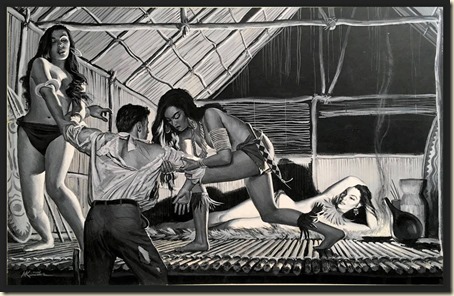 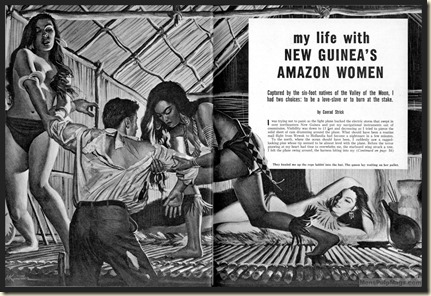 A couple of other cool Mort Kunstler paintings were recently posted in the group by my buddy Craig Clements. Craig is a major collector of original men’s adventure magazine artwork, especially work by Kunstler and Earl Norem.

Every once in a while, Craig sells off some of the MAM paintings he owns on eBay so he can free up space or raise cash to buy new ones. He is currently selling two Kunstler paintings I particularly love.

One is a totally gonzo classic showing a waterborne gang of hellraisers racing along in motorboats. It was used on the cover of MALE, August 1968 and goes with the story inside titled “I RIDE WITH THE OUTBOARD RAVAGERS.” 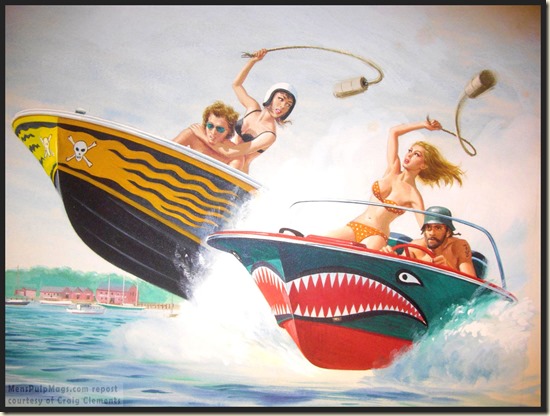 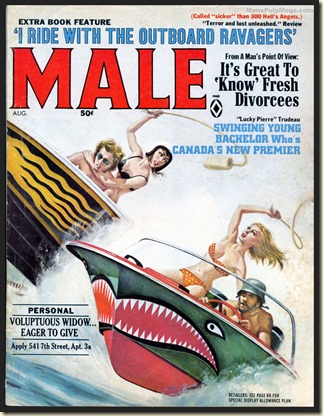 It’s a bank robbing bikers gang scene originally used on the cover of FOR MEN ONLY, February 1966.

As Craig noted in his post, it happens to be one of the covers featured in our book BARBARIANS ON BIKES, a visual archive of men’s adventure mag covers and interior illustrations featuring bikers and motorcycle gangs. 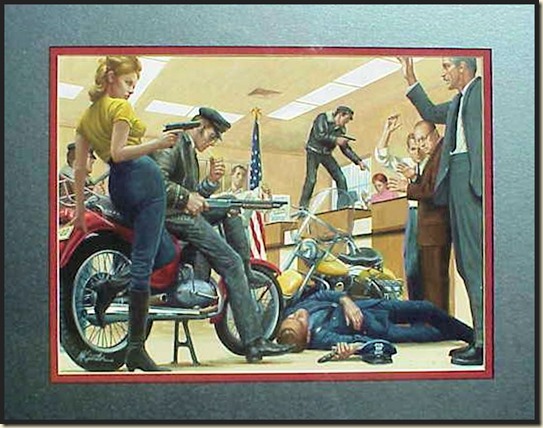 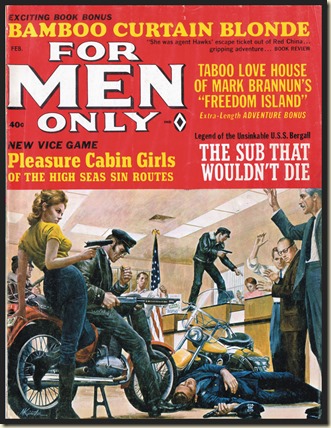 Our group member who goes by the nickname Johnny Begood and is an expert on vintage “Good Girl Art” from men’s magazines, recently posted a shot of a gorgeous painting by artist Victor Olson that’s up for sale on eBay.

It was used in ADVENTURES FOR MEN, June 1959 for the story “THE STRANGE MATING OF TERENCE O’LEARY.” 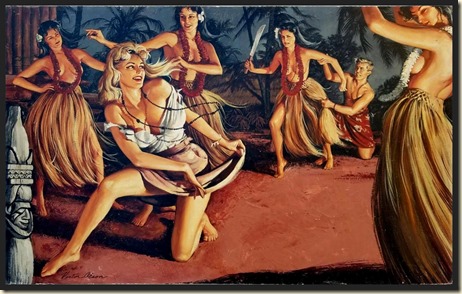 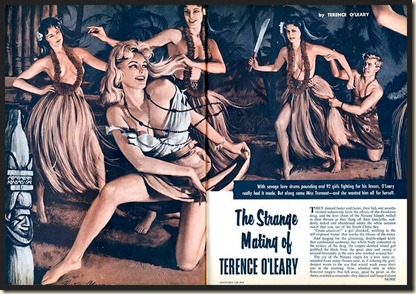 Speaking of strange mating, another recent post that gave us a chuckle was made by group member Kevin Delaney, an actor and voice talent pro for movies, TV shows and video games who has worked on many cool projects. (See his page on the Internet Movie Database here.)

Kevin posted a scan of an ad for “Life Size Go-Go Girls” from the September 1971 issue of MAN’S ACTION. For a mere $3, one of those lovely love dolls could have been yours!

That ad elicited a string of quips and comments, including one by Patrick Ford, a comics art expert who runs an interesting group about Marvel Comics called THE MARVEL METHOD.

Patrick posted a link to a UK Daily Mail article about a Japanese businessman who claims “he has finally found happiness by having an intimate relationship with his love doll Saori.” Yep, that’s the guy taking his, er, girlfriend shopping in a women’s clothing store in the photo below. 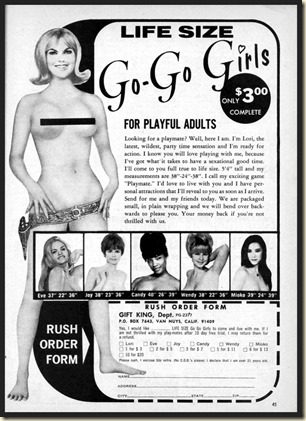 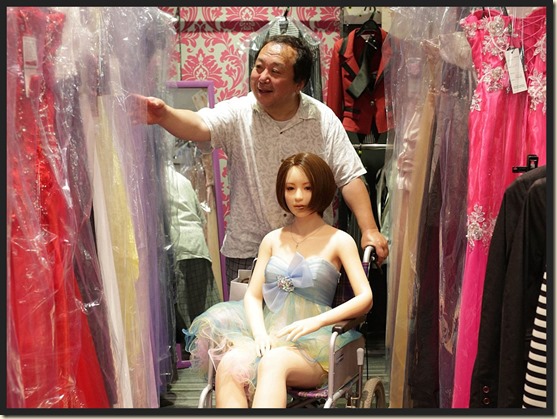 In another recent post in our FB group, member Chuck Sycamore, a vintage pulp mag and illustration art maven in Chicago, posted photos of something neither he nor I had ever seen.

It’s a subscription flyer for TRUE magazine from around 1952 or 1953 that has a cool Tom Lovell illustration on one side and a pitch to potential subscribers on the other.

Lovell’s painting, which was used for a story in the July 1952 issue of TRUE, shows a group of nude women being attacked by a huge tiger. 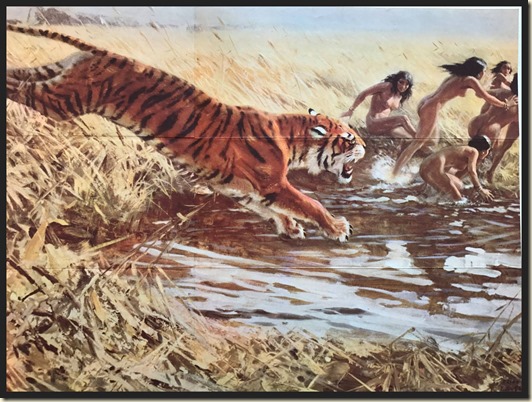 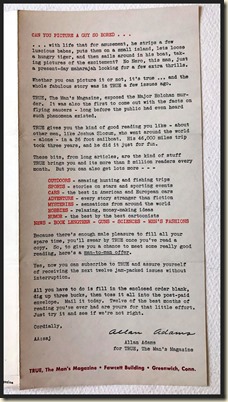 The tiger artwork is uncredited and unsigned, but looks like it was done by Charles Fracé, who started out as a magazine illustrator and ended up as a wildlife artist.

It was used for the story “THE DEADLY CARGO OF THE BRAZEN HUSSY.” That one is not included in our new book of “killer creature” stories and artwork I WATCHED THEM EAT ME ALIVE, but it would fit right in. 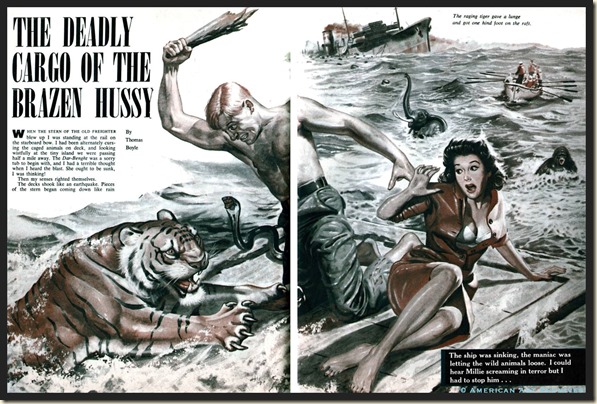 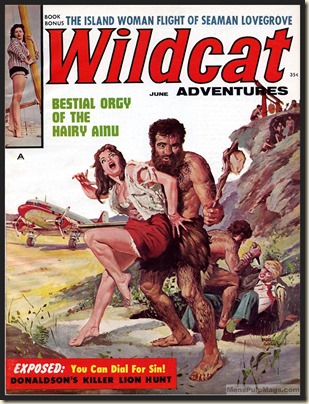 As a side note, my publishing partner Wyatt Doyle and have been pleased by the reviews that book has been getting from people we highly respect.

One recent review was posted by Ron Fortier on his Pulp Fiction Reviews blog. Ron is a legendary comics and “New Pulp” writer, editor and publisher, so we were quite proud to read his positive review. If you don’t know Ron’s work, check out the website of his Airship 27 publishing company. One of the latest Airship 27 offerings, titled TALES FROM THE HANGING MONKEY (Vol. Two), is clearly an homage to classic adventure pulp and a TV show you may recognize.

We also got a nice review from John Navroth, Editor of the great MONSTER WORLD MAGAZINE blog. And, we got a 5-star Amazon review from Dan Leo, author of the mind-blowing serial novel RAILROAD TRAIN TO HEAVEN.

We’re big fans of Ron, John and Dan, so it’s a pleasure and honor to get positive reviews from them. 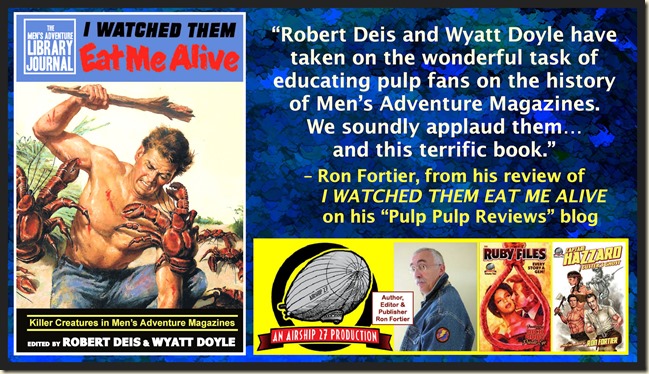 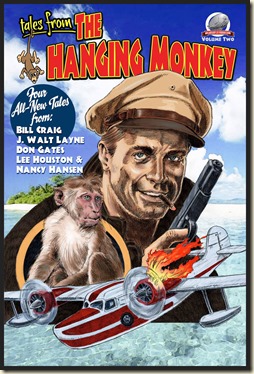 One of my own recent posts in the Men’s Adventure Magazines & Books Facebook Group was a scan of a story in ARGOSY, December 1963.

The story is about Captain Paul Boynton, a real life adventurer who (among other things) invented a floating rubber suit that was like a cross between a modern diving drysuit and a kayak. He used it to paddle across the English Channel and down various rives in America and Europe in the 1870s and 1880s.

I love ARGOSY’s full-color interior illustration by George Gross showing Boynton and his suit. For an in-depth account of Boynton’s adventures, get the book, ROUGHING IT IN RUBBER. It has nothing to do with love dolls. 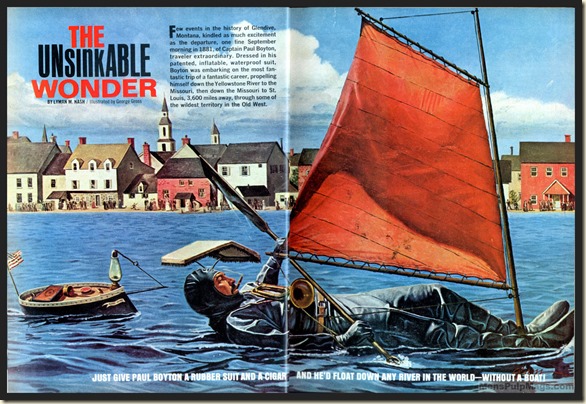 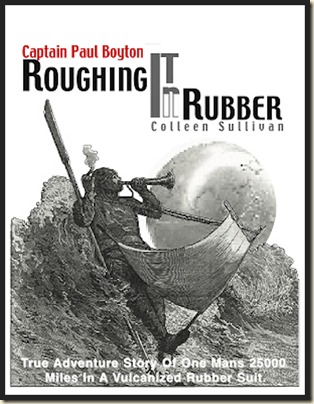 If the posts above look like things you’d enjoy, but you’re not yet a member of the Men’s Adventure Magazines & Books Facebook Group, click this link to group’s main page, then click the “Join Group” button.  We usually respond to requests the same day.

Fair warning: we screen out people who appear to be fake Facebook entities or whose timeline posts peg them as likely trolls or jerks. And, sorry kids, the group is limited to adults.

What I’ve been reading in the Western, pulp and action/adventure genres — and beyond…