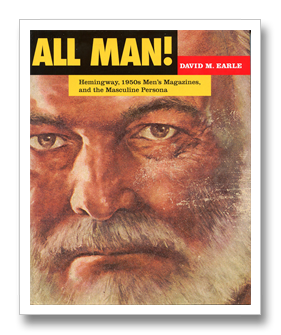 All Man!, by Dr. David M. Earle, is a fascinating new book that provides a unique perspective on men’s adventure magazines.

It traces the evolution of Ernest Hemingway’s giant-size public persona as reflected in vintage magazines, especially the men’s adventure and bachelor mags of the 1950s.

In doing this, Earle also provides fresh insights about the roles that men’s adventure and bachelor magazines played in the lives of World War II veterans and other men, especially in the Fifties.

In addition, it reprints several hard-to-find articles about Hemingway, taken from men’s adventure magazines like Bluebook, True and Climax.

I really enjoyed and learned a lot from reading All Man! And, I highly recommended it to anyone interested in men’s magazines, other vintage magazines, Hemingway or 20th Century American cultural history in general. 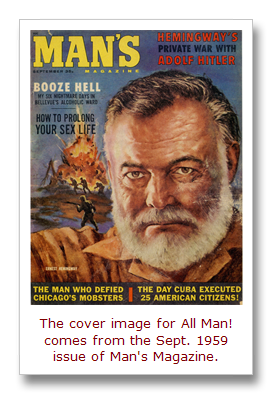 Author David Earle is an Assistant Professor in the Department of English and Foreign Languages at University of West Florida in Pensacola. He teaches courses in literature there and has created a growing website with his students that discusses pulps, men’s adventure and bachelor magazines.

Recently, I had the opportunity to talk with Earle and ask him some questions about All Man!

Here’s the first part of that interview…

How did you get interested in doing a book about Ernest Hemingway?

EARLE: I was born in Sun Valley, Idaho, near Ketchum, where Hemingway had one of his homes and eventually committed suicide. My mom was a nurse and my dad was a doctor. Actually, my mom was Hemingway’s nurse before he was taken to the Mayo Clinic in his final months and my dad was Mary Hemingway’s doctor. So my parents told me stories about Hemingway as frail, failing, quiet, and polite man. Very much different from the image that was presented, by himself and others, in the popular press, and especially different from the hyper-masculine role model found in the men’s magazines. So that was the initial inspiration for All Man! — my interest in the  conflict between the public and private Hemingway, between a romantic myth and reality.

As your book discusses, a lot of the Hemingway myth was reflected in the men’s magazines.

EARLE: Yes. And, Hemingway’s public image itself parallels the conflict between the romantic myth of the 1950s as “the Golden Years” and reality of those years. The men’s magazines of the era offer an excellent window into exploring this conflict, both of the culture and of the man. 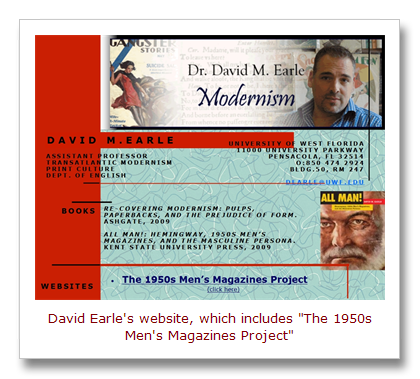 So, that’s how you started studying men’s adventure magazines?

EARLE: I had actually done research on prewar pulp magazines and vintage men’s magazines for my previous book Re-Covering Modernism, which was more of an academic work. After that, I wanted to write a book for a wider audience that explored postwar men’s magazines. And All Man! was the fun and logical result. I initially started collecting men’s bachelor magazines, since they often published highbrow modernist authors, like Hemingway, William Faulkner and James Joyce, and I teach courses about modernist literature. But, as I collected, I came across more and more well known authors, particularly Hemingway, in the men’s adventure magazines. Indeed, there were so many examples by and about Hemingway that I saw there must have been something deeper going on in the culture and with Hemingway as a figure of masculinity.

What’s one of the most interesting things you learned about men’s adventure magazines in writing All Man!?

EARLE:  The most concentrated exploration of men’s adventure magazines that I make in the book, and which I find pretty enthralling and novel still, is how they offered veterans of World War II a means to deal with and categorize both their wartime experience and the difficulties of returning to United States. They returned to a society that was, for a large part, unaware of exactly how horrible their experiences had been. The bloody realities of the war had generally been censored by the government and avoided by the press.

So, the men’s adventure magazines helped veterans deal with their wartime experiences? 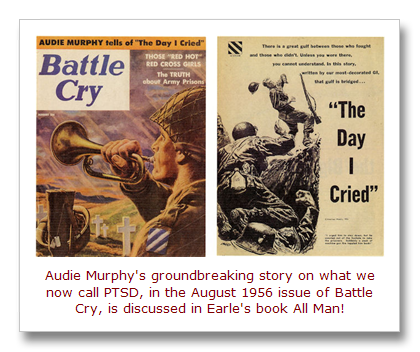 EARLE:  Yes. The end of the war was obviously a happy time, but also a very traumatic time: a difficult shift to a postwar economy, pressures of suburbanization, the simple difficulties of readjusting, and even the difficulty of expressing, to your family and yourself, the experience of war. Men’s adventure magazines like Battle Cry featured stories by and about vets, soldiering, battle. They offered columns for reuniting with former war buddies. They returned men to the camaraderie of soldiering, but in a safe place. The stories about war provided a text and narrative for vets to identify with. This is one of the important parts of healing for PTSD [post traumatic stress disorder], hence why “rap sessions” were implemented for vets returning from the Vietnam War. Audie Murphy, the World War II hero who became a famous actor, wrote an amazing story about this for Battle Cry in 1956 that was instrumental in breaking the previous taboo about discussing war-related mental problems. [Note: See more about this topic in the previous post, “Men’s adventure magazines and PTSD”.]

What about some of the other extreme aspects of men’s adventure magazines, like the “Weasels Ripped My Flesh” stories and Nazi bondage and torture covers? 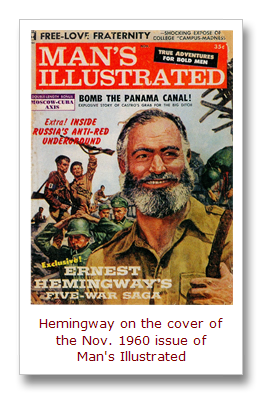 EARLE:  All of the men’s adventure mags featured stories about men facing extreme situations. In addition to battle stories, there were other themes of men in extreme situations – men vs. animals, Nazis, nature, etc. Some of those may now appear ridiculous, but at the same time such fantastic situations make traumatic reality codifiable. One can deal with the tensions of the real world in a safe fantasy world of fiction. In the 1890s, adventure romances by authors such as H. Rider Haggard, Bram Stoker, and A. Conan Doyle, were incredibly popular because they allowed readers to deal with the tensions created by urbanization, industrialization, scientific advances, and globalization. Something similar was going on in America in the 1950s and this is one reason why men’s adventure magazines were so popular.

All Man! is one of three major books published in recent years that deal with men’s adventure magazines, the other two being It’s a Man’s World

and Men’s Adventure Magazines, which features the Rich Oberg collection Why do think there’s a growing interest in the postwar men’s adventure magazines?

EARLE:  I think that probably the easiest explanation is because of the Internet. Anyone who has collected pulps, whether prewar or postwar, for any period of time has witnessed a huge explosion in the popularity of these magazines because of eBay. Suddenly people know they can get these cool things which before where scattered in the hands of a much more limited number of collectors. Of course, the more academic answer is that we are a more visual culture, and the extremity of the covers offer a kitschiness that contrasts with our modern sensibilities. But for whatever reason, I am honored to be grouped with the other two excellent books you mentioned.

Thank you, Dr. Earle. We look forward to hearing more from you about vintage men’s magazines and hope that readers of this blog will help encourage your efforts by buying All Man!