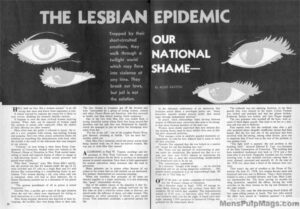 I’ll start this third post in my series about the depiction of lesbians in vintage men’s adventure magazines with a startling revelation from a story in the December 1964 issue of MAN’S EPIC, an issue that features a great WWII damsels-in-distress painting by Bruce Minney on its cover.

(Here are links to the first post and the second post from the series, in case you missed them.)

That story, titled “THE LESBIAN EPIDEMIC, OUR NATIONAL SHAME,” explains that when male prison guards beat women prisoners “this sort of thing…contributes to a common anti-male feeling held by lesbians.”

OK. That’s not really a startling revelation. But I did have a revelation while reading this old MAN’S EPIC exposé. 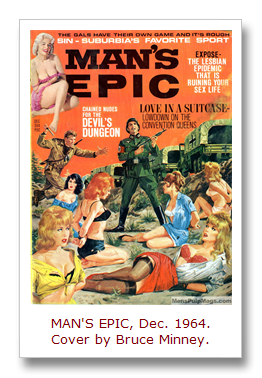 Most men’s pulp mag stories about lesbians have sensationalized titles, headlines and subheads and are illustrated with titillating photos or artwork.

But underneath the usual pulp-sleaze hype, some stories about lesbians in prison made serious points regarding the need for prison reform and almost seem ahead of their time. At least, on that front.

For example, “THE LESBIAN EPIDEMIC” story ends by noting that the United States was spending billions to keep both male and female inmates in shamefully-operated prisons and concludes: “Reform would be infinitely cheaper.”

In its view of homosexuality, however, the story is a reflection of its time.

The author, Aldo Saxon (probably a pseudonym), describes lesbianism as a depraved mental disease that should — and could — be cured.

…prisons are breeding grounds for the practice of depravity and the recruitment of young innocents to the “queer world.” We must be willing to recognize lesbianism as an illness and treat its sufferers accordingly. Certainly, additional psychiatric help is indicated. 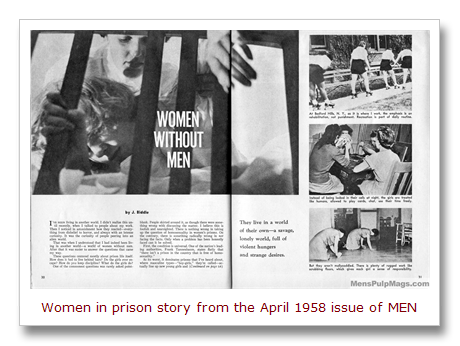 An earlier story from the April 1958 issue of MEN magazine, “WOMEN WITHOUT MEN,” is similarly progressive on the need for prison reform. (BTW, the cover of that issue features a nice WWII action painting by the great Mort Kunstler.)

The story in MEN is a first hand account written by a woman who worked as a matron (i.e., a guard) at the New Jersey State Prison for Women — a facility popularly called the Clinton Farms Reformatory for Women back when the belief that prisons could “reform” inmates was more prevalent than the idea that prisons themselves needed reforming to achieve that goal.

There’s an intense photo of a young girl behind bars on the first page of the story that reminds me of the poster for Linda Blair’s notorious girls’ reform school movie BORN INNOCENT (1974).

There’s also a scary-sounding subhead on the second page that blares: “They live in a world of their own—a savage, lonely world, full of violent hungers and strange desires.”

Ironically, the other photos and the story itself make Clinton Farms seem pretty mild compared to the harsh images popularized by mid-20th Century women in prison films. 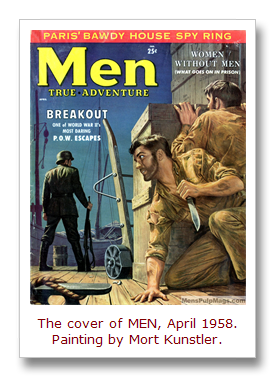 The article’s discussion of lesbianism is straightforward and amazingly unsensationalized. The author, credited as “J. Biddle,” tells us:

At its worst, it dominates prisons that I’ve heard about, where masculine types—“boy-girls,” they’re called—actually line up new young girls and choose the ones they will “marry.” At its best, no such overt acts occur but the presence of homosexuality is sensed nevertheless, a dark underground stream that cannot be dammed…
Only a few of the girls are lesbians when they arrive. Many are completely ignorant of it. Others are determined to resist it.
Yet unavoidable pressures force them toward it. A new arrival is lost and miserable in unfamiliar surroundings. For a girl, even more than for a boy, the natural thing is to find a friend among the inmates who will help her learn the ropes.

There’s nothing like BORN INNOCENT’s infamous rape with a broomstick handle in “WOMEN WITHOUT MEN.” There are no lurid tales of guards abusing the inmates.

And, you can’t help but notice that some of the photos seem out-of-sync with a story that’s supposed to be about “violent hungers and strange desires.”

A third photo shows two women scrubbing floors. According to the caption, that pic proves the inmates at Clinton “aren’t mollycoddled.” The caption also helpfully explains that scrubbing floors “gives each girl a sense of responsibility.”

Not surprisingly, the women in prison stories published in men’s pulp magazines during the 1970s tend to be a bit more extreme than “WOMEN WITHOUT MEN.”

In the ‘70s, such stories were often like the “caged women” sexploitation movies of that era. 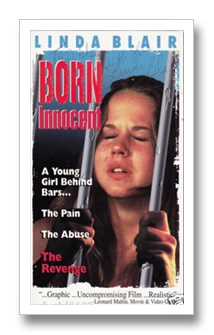 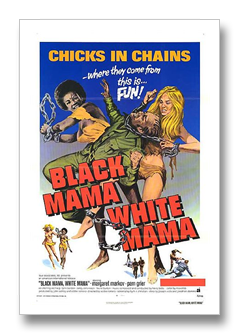 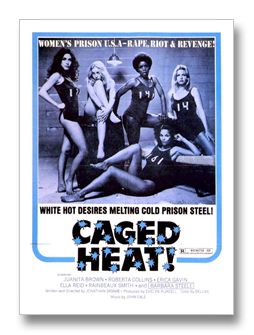 Some have the tongue-in-cheek flair of “chicks in chains” cult films like the early Jonathan Demme classics BLACK MAMA, WHITE MAMA (1973) and CAGED HEAT (1974).

A good example is the story “SEX WAS THE ONLY THING I LEARNED IN PRISON” in the April 1971 issue of MAN’S WORLD. 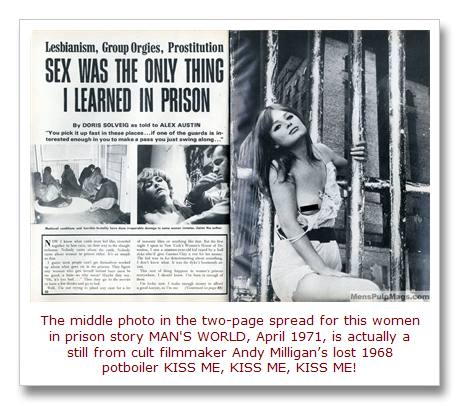 It’s a sensationalistic “as told to” yarn written by Alex Austin.

Austin was a versatile author who wrote hundreds of stories for men’s adventure magazines in the 1950s, 1960s and 1970s.

He also wrote several novels and edited some interesting story anthologies for Lion Library, the paperback sub of one of the biggest publishers of men’s adventure magazines, Magazine Management. (You can read more about Austin’s work in this previous MensPulpMags.com post.)

The MAN’S WORLD story was (supposedly) told to Austin by a hard-bitten, world-weary prostitute who spent time in several women’s prisons.

The opening paragraphs are eloquently gritty:

Now I know what cattle must feel like, crowded together in box cars, on their way to the slaughterhouse. Nobody cares about the cattle. Nobody cares about women in prison either. It’s as simple as that. I guess most people can’t get themselves worked up about what goes on in the prisons. They figure any woman who gets herself behind bars must be no good, a bum—so why sweat! Maybe they say, “Oh, it’s too bad …” Then they go to the movies or have a few drinks and go to bed.
Well, I’m not trying to plead any case for a lot of innocent lilies or anything like that. But the first night I spent in New York’s Women’s House of Detention, I saw a nineteen-year-old kid raped by a bull dyke who’d give Cassius Clay a run for his money. The kid was in for demonstrating about something. I don’t know what. It was the dyke’s fourteenth arrest.
This sort of thing happens in women’s prisons everywhere. I should know. I’ve been in enough of them.

Grim stuff. However, like CAGED HEAT, this story has an air of sly, pulpy humor. 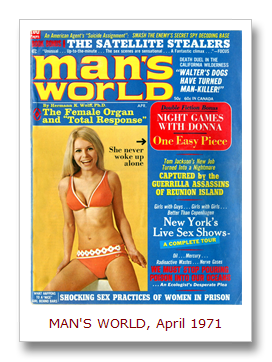 I’m not sure if the full-page photo of the scantily-clad young lady with the prison bars is part of the intentional humor. It may be unintentional. Either way, it’s pretty funny.

She looks more like a Victoria’s Secret model than a prison inmate. And, her image is obviously superimposed over the shot of the prison bars, in a pre-Photoshop paste-up job that makes the bars look out of scale.

I wonder if the poor, unfortunate lass had to scrub the floors like the inmates at the Clinton Farms Reformatory for Women. And, did she have to wear that revealing torn slip as she scrubbed away?

Hmmm. I can see it in my mind’s eye. It’s definitely the kind of horrifying image that would spur prison reform. Yessiree!

My co-editor on the WEASELS RIPPED MY FLESH! and HE-MEN, BAG MEN AND NYMPHOS story anthologies, Wyatt Doyle, noticed another funny thing about this story that reflects his vast knowledge of obscure movies.

Coming up: a look a story that really might have horrified men who read men’s adventure magazines — “THE SHOCKING SCANDAL OF SUBURBIA’S LESBIAN WIVES,” from the December 1973 issue of MAN’S STORY.

For the complete experience, you can click this link or the link below to download and read that entire issue.

[And here are links to Part 1, Part 2 and Part 4 of this series about “Lesbians in Men’s Adventure Magazines”]