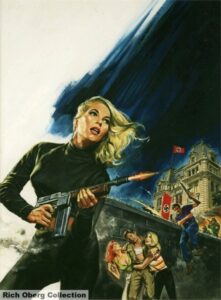 AN EXCITING UPDATE ABOUT EVA LYND: I originally uploaded this post in 2012. At the time, I noted that I wasn’t sure if Eva Lynd was still alive. A few days ago, I was thrilled to receive an email from Eva, letting me know she was alive and well and living in Hollywood. She graciously gave me corrections to a couple of errors in my original post, plus some photos and anecdotes that will appear here in the future. Thank you, Eva!!! It’s a great pleasure and honor to have made contact with you.

In my previous post about Eva Lynd I noted that, while Eva was best known as actress and glamour photography model in the 1950s and 1960s, she also has a notable place in the history of men’s adventure magazines published during those decades.

Eva was a favorite model of Norm Eastman, the illustration artist whose wild bondage and torture cover paintings for the so-called “sweat magazine” subgenre are among the most famous (and infamous) examples of men’s adventure pulp art.

In some Eastman cover scenes, Eva was the model for a fierce, gun-toting babe who’s fighting against the Nazis or some other bad guys.

The original Eastman painting used for one of my favorite tough chick covers featuring Eva Lynd is shown at the top of this post. 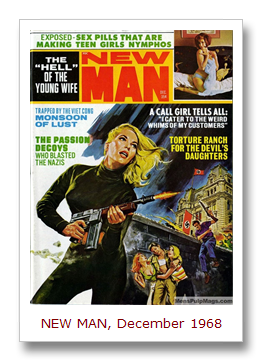 It was used for the December 1968 issue of NEW MAN magazine and now resides in the enviable collection of my friend and collaborator Rich Oberg.

Of course, in most of the Eastman cover paintings Eva “appeared” in, she was a scantily-clad damsel in distress being tormented or tortured by sadistic Nazis, Japs, Communists or other fiends.

In her “DID” roles, poor Eva’s character was whipped, crucified, burned, frozen, drowned, branded, strangled, stretched on the rack, and subjected to various other astoundingly imaginative forms of torture — all brainstormed by Eastman and B. R. “Bud” Ampolsk, one of the owners of the Reese and EmTee publishing companies.

Ampolsk’s partner was Maurice Rosenfield (spelled Rosenfeld in some sources). Given the many Nazi bondage and torture covers featured on their magazines, it may seem ironic that Ampolsk and Rosenfield were two nice Jewish guys from New York.

But apparently it didn’t seem ironic to Bud and Maury. And, despite the criticisms sweat magazines often get (especially those with Nazi covers), the fact is that the Nazis and other torturers are always portrayed as evil bastards — not someone most male readers would identify with or emulate.

Meanwhile, one of the best-selling books among women readers right now is FIFTY SHADES OF GREY by E.L. James, an S&M “romance” novel. 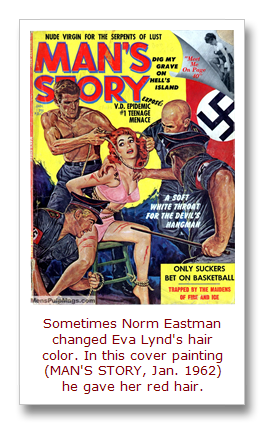 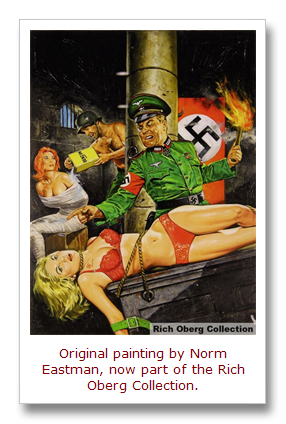 “Ampolsk was a very relaxed guy. Rosenfeld was also a nice guy. They gave me the feeling that you weren’t really doing these dirty little books. Ampolsk and I would meet over the covers and talk about what we were going to do. Over time, I made a whole list of torture methods. Starting with fire, water, stretching, ice, and electricity, we’d go through the list and come up with something that we hadn’t done before. Ampolsk once told me in all seriousness that we had never done anything that the Nazis hadn’t actually done.”

Alas, no magazines of any kind that I know of listed the names of the models used for cover paintings or interior illustrations. (Many men’s pulp mags didn’t even list credits for the artists.)

So, although Eva Lynd appeared in Eastman paintings used on and in scores of men’s pulp magazines, that part of her career remained obscure until it was noted in Rich Oberg’s book. 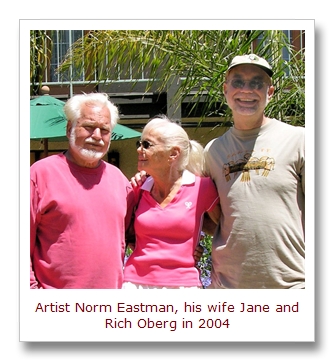 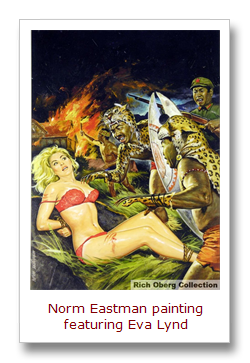 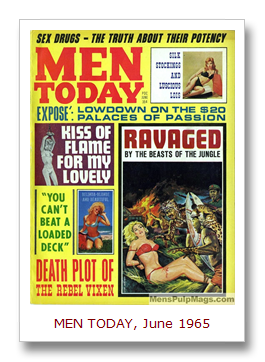 Rich visited Norm in 2004, a few years before the artist’s death. During those visits and subsequent conversations Norm told Rich the names of the models he used for various covers when he could remember them. Thus, in some cases, Rich knows Eva was a model on a particular cover because Norm IDed her himself.

In some cases, Rich and I have both made educated guesses about covers that feature Eva based on the known IDs and on photos and videos of her. 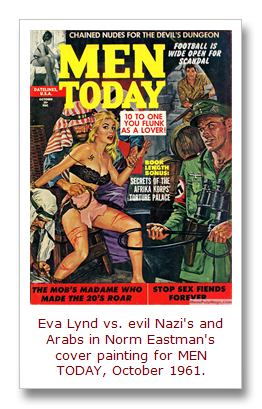 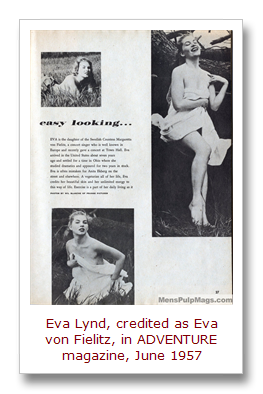 Eva started out almost simultaneously as an actress and a glamour photography model around 1957. Eva Lynd was her professional name. But throughout her acting and photo modeling career she was also sometimes credited under her birth name, Eva von Fielitz (sometimes misspelled as Eva von Feilitz). 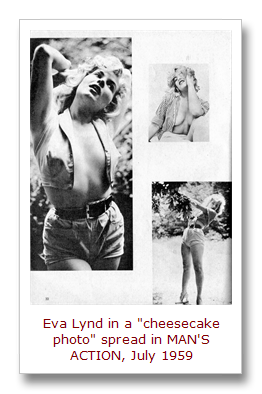 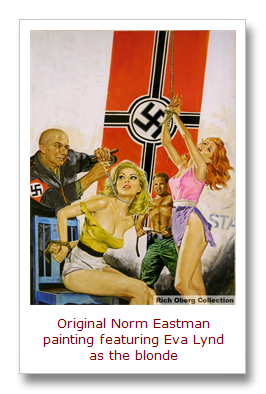 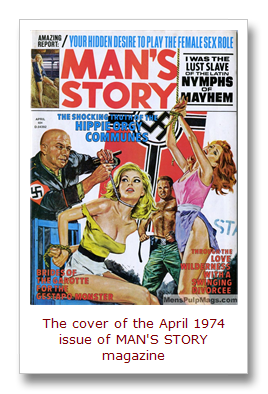 A photo spread featuring Eva in the June 1957 issue of ADVENTURE magazine (with photos taken by the pioneering African-American photographer Wil Blanche) offered this brief bio:

“EVA is the daughter of the Swedish Countess Margaretta von Fielitz, a concert singer who is well known in Europe and recently gave a concert at Town Hall. Eva arrived in the United States about seven years ago and settled for a time in Ohio where she studied dramatics and appeared for two years in stock. Eva is often mistaken for Anita Ekberg on the street and elsewhere. A vegetarian all of her life, Eva credits her beautiful skin and her unlimited energy to this way of life. Exercise is a part of her daily living as is with most Swedish people. Eva has appeared on TV and at present is trying for a part in a Broadway show. While waiting for her big chance she does much modeling. Her ambition is to go to Hollywood, but she feels that, while waiting, her best bet is New York TV.”

During those years, she was a regular on two groundbreaking variety shows that mixed comedy sketches, music, and interviews: THE STEVE ALLEN SHOW and THE GARRY MOORE SHOW. She also appeared in episodes of THE THIN MAN, PETER GUNN and PRODUCERS’ SHOWCASE. Later, in the 1970s, she showed up in episodes of HOGAN’S HEROES and CAGNEY & LACEY.

One of Eva’s most widely-seen appearances on television was in the famous Brylcreem “Girl in the Tube” commercial. 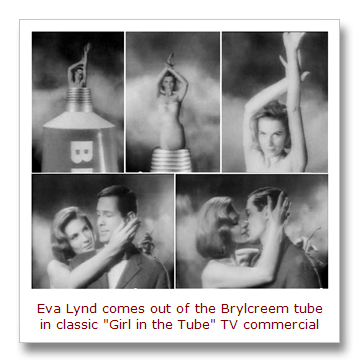 She’s the gorgeous gal who emerges from the tube, then appears behind the lucky guy who uses some Brylcreem and gives him a big, appreciative kiss.

This classic ad was originally created around 1966 then re-edited in 1986 with a new version of Brylcreem inserted at the end.

In the gonzo movie THE HYPNOTIC EYE (1960), she assists the mysterious hypnotist played by Jacques Bergerac during the famed levitation scene.

She later appeared in another campy flick, the 1970 spy caper THAT LADY FROM PEKING (a.k.a THAT GIRL FROM PEKING), which also featured Carl Betz, Bobby Rydell, Nancy Kwan and Sid Melton.

In that now extremely hard-to-find film, she was credited as Eva von Feilitz.

Of course, most men in the 1950s and 1960s were probably more aware of Eva’s work as a glamour photography model.

She appeared on the covers and inside spreads of many men’s magazines of the era, including both the “girlie mags” that were precursors to or competitors of PLAYBOY and men’s adventure magazines, which frequently included “cheesecake” photos of both professional pinup models like Eva and wannabe amateurs.

Coming up in future posts: more about the great Eva Lynd…

In the CafePress store: T-shirts, posters and other cool stuff  featuring EVA LYND… 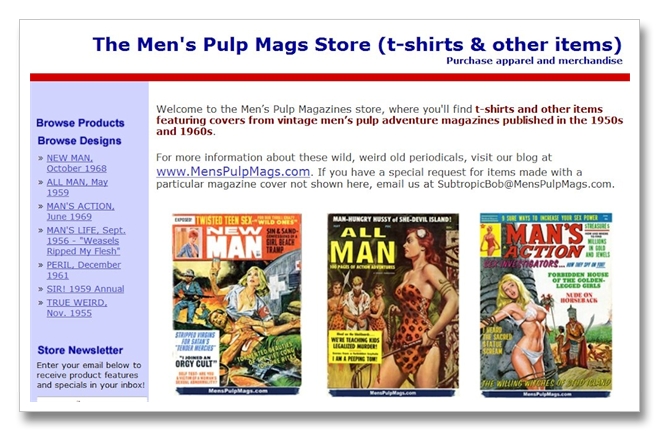