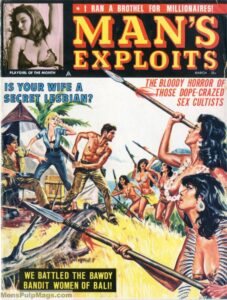 Previous posts in my series about lesbians in men’s adventure magazines noted that, early in their careers, some writers who later became well-known novelists penned purportedly true, but essentially made up “sexology” and sexposé books and stories under pseudonyms. (In case you missed those posts, here are links to Part 1, Part 2, and Part 3.)

For example, the best-selling crime and mystery novelist Lawrence Block once wrote highly believable articles and books about sex-related topics, including lesbians, under the name Dr. Benjamin Morse. The great science fiction and fantasy writer Robert Silverberg did the same using the pseudonym L.T. Woodward, M.D.

Recently, I ran across another interesting example of a pseudonymous sexposé about lesbians in the March 1964 issue of MAN’S EXPLOITS magazine. (That complete issue is now available as download in PDF format in the MensPulpMags.com Payloadz store).

It’s a story that undoubtedly horrified male readers of the magazine, titled “IS YOUR WIFE A SECRET LESBIAN?”

In this case, the writer behind the story’s pen name did not go on to wider, lasting fame. But back in the day he was a prolific contributor to men’s adventure magazines.

He also wrote many pulp sexology books published in the ‘60s and ‘70s. 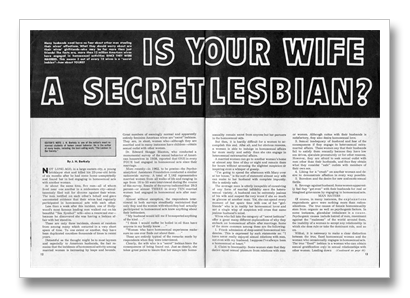 The Editor’s Note on the first page of  “IS YOUR WIFE A SECRET LESBIAN?” says the author — credited as J.H. Berkely — was “one of the nation’s most renowned students of human sexual behavior….author of many books, including the best-selling work, ‘The Lesbian In Our Society.’”

If you go Googling for the book THE LESBIAN IN OUR SOCIETY by J.H. Berkely, you won’t find it.

However, you will find a real book by that title first published in 1962, two years before the MAN’S EXPLOITS story was published.

That book is credited to W.D. Sprague, Ph.D.

Sprague is also credited as the author of such classics as SEXUAL BEHAVIOR OF AMERICAN NURSES (1963), PATTERNS OF ADULTERY: A MARRIAGE COUNSELLOR’S CASEBOOK (1964), SEX AND THE SECRETARY (1964), SEXUAL BEHAVIOR OF THE AMERICAN HOUSEWIFE (1965), SEXUAL REBELLION IN THE SIXTIES (1968), SEX CHEATS: A PHYSICIAN’S CASEBOOK OF PSYCHOSEXUAL ABERRATION AMONG THE MARRIED (1969) and THE SENSUOUS HOOKER (1972). 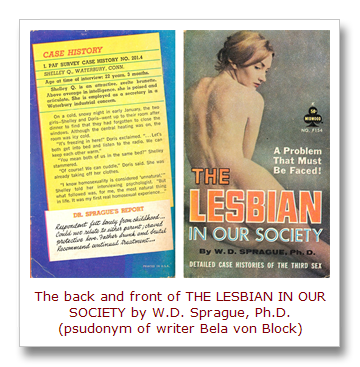 Amazingly, only a few sources (such as Phil Stephensen-Payne’s indispensable site about vintage magazines, Galactic Central) note that W.D. Sprague is a pseudonym for the Bela W. von Block.

I don’t know why the editors of MAN’S EXPLOITS used J.H. Berkely for this story instead of W.D. Sprague or von Block’s own name. (He wrote hundreds of men’s adventure mag stories under variations of his own name.)

Maybe it was to avoid some copyright issue — or to avoid payment.

But the story is clearly drawn from the book THE LESBIAN IN OUR SOCIETY by, ahem, W.D. Sprague, Ph.D.

The book and story both feature case studies supposedly provided by the “Psychoanalytical Assistance Foundation,” or PAF, for short.

If you Google the name of that organization you will eventually figure out that it only seems to appears in books and articles written by W.D. Sprague — and, in one instance, by J.H. Berkely. (In some cases, von Block called it “The Psychoanalytic Assistance Foundation.”)

The PAF case studies read like a cross between a real scientific document in the style of Alfred Kinsey and a sleaze paperback novel.

For example, here are some excerpts from one cited in the MAN’S EXPLOITS story:

PAF Case History No. 101.8
Name: June L.
Place of residence: Louisville, Ky.
Age: 32 years, 6 months.
(Mrs.) June L. is married to Ronald L., 45, a building contractor. They have been married 12 years, have two children.
June L. is a lovely—but rather tense—woman with delicate features and large hazel eyes. Her figure is very feminine, with full, firm breasts and well-rounded hips…
After they had been married eight years, Ronald bought a new house. When they moved into it, June was delighted to find that the next-door neighbors were friendly and pleasant. She especially liked Marcia O., but also became quite friendly with her husband, Hugh.
June often visited with Marcia in the mornings and afternoons while both their husbands were away at work and June’s children were at school.
One night, June and Ronald had a particularly angry argument. The next morning, June went to Marcia’s house and unburdened herself, telling the other woman the whole story of her marriage.
“I know, dear,” Marcia murmured. “I’ve known it all along.”
“You’ve know what all along?” June asked in surprise.
“This!” Marcia said hoarsely, and she put her arms around June and kissed her passionately on the lips…
To her amazement, June found she was sexually aroused by Marcia’s touch and kiss. She opened her mouth and allowed Marcia’s tongue to probe hungrily between her lips. June responded to the other woman’s kisses and caresses as she had never responded to her husband’s love-making…
The two women have been having a secret homosexual relationship ever since. Their husbands know nothing of this. Both women submit to their respective husbands “when necessary.”
“Thank God, it isn’t often!” June exclaims gratefully.

For most of the men who read of men’s pulp adventure magazines in the 1960s, about the only thing that could be more maddening and ego-shredding than the thought of your wife having an affair with another man was the thought that she could be having a lesbian affair.

Was there reason for the manly readers of MAN’S EXPLOITS to worry about their own wives? Yes, indeed! — according to the article by Berkely/Sprague/von Block.

Why, just that year (it claims) an in-depth study by the authoritative (albeit apparently mythical) Psychoanalytical Assistance Foundation “indicated that 29.3 percent—or almost THREE in every TEN married women had engaged in homosexual acts after marriage.”

As far as “stopping” wives from “turning lez” is concerned, there is much that husbands can do, at least in a goodly portion of instances. First of all a husband should treat his wife with affection and consideration. Then, he should read a reliable sex-manual or consult his physician, a psychologist or a marriage counselor to insure that he knows and is able to employ proper sex techniques so that his wife achieves orgasm and is satisfied emotionally as well as physically by sexual intercourse with him. Also, he should see to it that she is not bored by her existence. If he detects signs of boredom or restlessness, he should seek the causes and fake whatever remedial measures are within his power.
A husband who does these things goes a long way toward insuring that his wife will not wander, that she will not be unfaithful to him, heterosexually or homosexually. 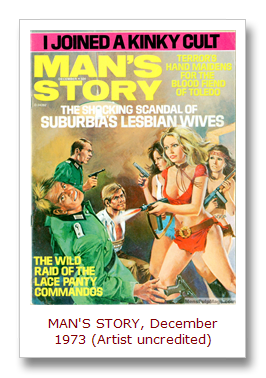 Over the years, men’s adventure magazines published a number of other helpful articles for readers who wanted more information about lesbian wives.

Another interesting one from a cultural history perspective is in the December 1973 issue of MAN’S STORY. (Available as a download by clicking this link.)

And, yes, it actually links the spread of middle class, suburban neighborhoods in America to lesbianism.

It also stokes the fear most men had about the burgeoning women’s liberation movement.

In fact, this sexposé paints a true nightmare scenario for the poor schmuck who worked hard at some factory, store or office so he could afford to buy his family a nice home in the suburbs, especially if he harbored any concerns about how women’s lib affected his manliness, his wife and his marriage.

The author, Frank Gorman (who I could find nothing about), lays out his case in the first few paragraphs…

The sexual revolution in this country has spawned a dark urge as old as Sappho, who wrote poems to her female love partners on the isle of Lesbos about 600 B.C., and as new as this morning’s headlines.
The dark urge is lesbianism.
Its growth in the past fifteen years has been phenomenal, or is it a coincidence that those same fifteen years have seen the mass migration to suburbia. There is a definite link between the two.
Today; with a lesbian population in the U.S. of about five million (that’s a conservative estimate) there’s reason to believe that with the influence of women’s lib more and more suburban wives are turning to invert relationships. 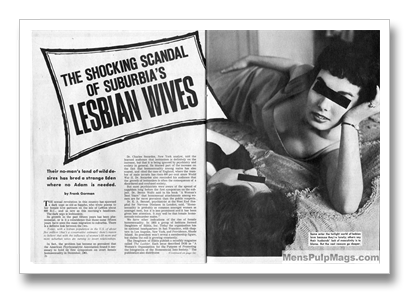 According to studies and experts cited in this story “lesbianism is often the consequence of a disordered and confused society.”

And, if you thought suburban life was a good thing, and that a man would be rewarded for working late to pay the bills for that dream house with the white picket fence, fuggedabowdit!

…the so-called rigors of suburban living have paved the way to what might be termed a mass inversion. Boredom is one of the prime factors. Denied contact with her husband for periods up to 15 and 16 hours a day, and unable to violate the double standard existing today, the suburban wife may well find herself indulging in a homosexual relationship if only to offset her loneliness.

That’s right buddy, you just can’t win — UNLESS your woman heeds the words of Dr. Bernard A. Bauer, a real life gynecologist from Vienna who wrote some papers in the late 1920s that apparently provided the perfect guidance for women of the 1970s.

As quoted in the story “THE SHOCKING SCANDAL OF SUBURBIA’S LESBIAN WIVES,” Herr Doktor said:

“Freedom for women means freedom to love. But we cannot go against nature. Woman is intended for reproduction; she has been appointed to take an active part in the reproduction of the race by pregnancy and child-birth. And while these laws of Nature remain every attempt at emancipation is futile.”

There ya go! Problem solved. Oh…wait…