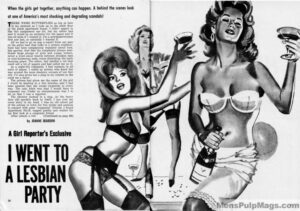 My previous post here explored some historically interesting stories about lesbians published in the 1950s, such as “The Sin You Don’t Dare Talk About” from the August 1957 issue of ADVENTURE magazine.

Three are included in the forthcoming anthology WEASELS RIPPED MY FLESH, a collection of classic stories from men’s pulp mags that I put together with Wyatt Doyle.

One of the stories Wyatt and I picked for the WEASELS anthology is “I Went to a Lesbian Party,” originally published in the May 1964 issue of ALL MAN. 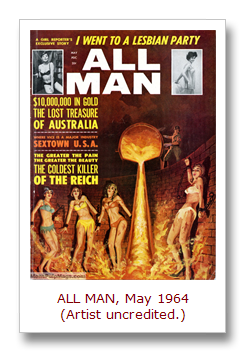 During the course of the story, Joanne attends a lesbian soirée and (gasp) finds herself unexpectedly attracted to one of the winsome partygoers.

Another wild yarn in the WEASELS anthology is “I Was a Lesbian for the FBI.”

That gonzo masterpiece comes from the April 1962 of TARGET magazine.

The story title is a play on “I Was a Communist for the FBI,” the name of a popular book and McCarthy-era movie that has become a cult classic.

In the case of the TARGET story, the undercover operative infiltrates a criminal ring rather than a Communist cell. And, the “lesbian” is a man dressed in drag.

Of course, he’s really the kind of manly man who can make a poor, misguided lesbo want to convert. (Fulfilling one of the favorite fantasies of the manly men who read men’s pulp adventure magazines.) 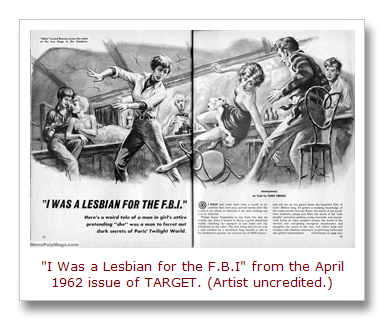 The third story about lesbians Wyatt and I picked for WEASELS RIPPED MY FLESH is “She Doesn’t Want You.”

In the 1950s and 1960s, Block honed his skills and helped pay his bills by selling spicy stories to several men’s pulp mags under the pen name Sheldon Lord.

“She Doesn’t Want You” is an early “Sheldon Lord” story from the June 1958 issue of REAL MEN magazine. 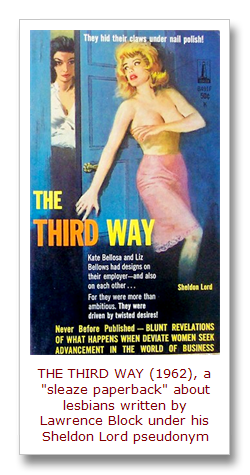 In Block’s recent autobiographical book AFTERTHOUGHTS (which I highly recommend), he recalled the origin of his Sheldon Lord pen name.

“I’d first used the name when I had two stories slated for the same issue of one of the digest-sized detective story magazines. The editor wanted to use a pen name on one of the stories, and I came up with Sheldon Lord…
I’d known a girl at Antioch College named Marcia Lord, and I really liked her last name. And I liked the name Sheldon, too, though I can’t offhand think of anyone who bore it. Sheldon Lord. I used it on that second short story, and I used it on a batch of articles I wrote for a couple of male adventure magazines. (I mean, would you want your own name on “Reinhard Heydrich, Blond Beast of the SS”? Well, neither would I.)”

(NOTE TO SELF: Find Lawrence Block’s pseudonymous story “Reinhard Heydrich, Blond Beast of the SS” and ask him if we can reprint it in Volume II of WEASELS RIPPED MY FLESH. It sounds like a classic.)

In “She Doesn’t Want You,” Block explains to the apparently clueless readers of REAL MEN that many prostitutes are probably faking the apparent pleasure they show when serving their male customers.

“Surprised?” he writes. “You shouldn’t be. If you’ve read your Kinsey, you’d know that an amazingly high percentage of this country’s prostitutes are lesbians. They get their wages from men — and their love from each other.” 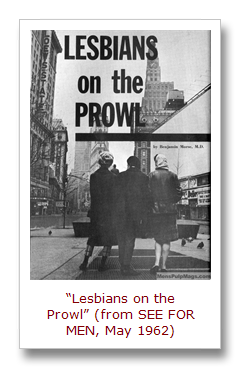 To add a greater air of credibility to some of the sex-related stories and paperbacks he wrote in his younger days, Block adopted a phony medical moniker — Benjamin Morse, M.D. (sometimes given as “Dr. Benjamin Morse”).

That’s the pen name used for the story “Lesbians on the Prowl,” published in the May 1962 issue of SEE FOR MEN (which has a great cover painting by artist George Gross).

The story is actually adapted from Block’s Kinseyesque sexology paperback THE LESBIAN, a “study of female homosexuality” published in 1962 by Monarch Books.

Although Block is not a doctor, his works as Dr. Morse do sound quite authoritative. And, like the writings of many real medical experts and non-experts in the mid-20th century, “Lesbians on the Prowl” reflects the common beliefs and prejudices of the era regarding lesbians. 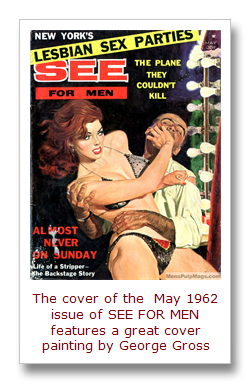 In a tone that ranges from somewhat scholarly to breathlessly pulpy, it explains why some girls turn to the “abnormal” practice of homosexuality, saying:

…a great variety of factors will lead girls into the twilight world of lesbianism. Psychologically, a perversion of the Oedipus complex in which the mother receives the sexual admiration normally directed toward the father is a most common and most nearly universal cause. But other factors are also likely to come into play.
A hatred for the entire male sex, deriving perhaps from a rape or a similar traumatic experience, will frequently crystallize into homosexuality. Tomboy behavior in adolescence, especially when encouraged by parents who “wanted a boy anyway,” will oftentimes have similar results…
Girls who attend private boarding schools where they remain exclusively in the company of other girls are most prone to develop into lesbians, since the essentially artificial environment of such an institution fosters homosexuality, the only outlet available. In several exclusive New England finishing schools, for example, there is a lesbian underground sorority which embraces from a quarter to a third of the student body. Promising younger girls are elaborately seduced by older girls and are initiated into the practice. One of these sororities has been in existence without interruption for the better part of a century. 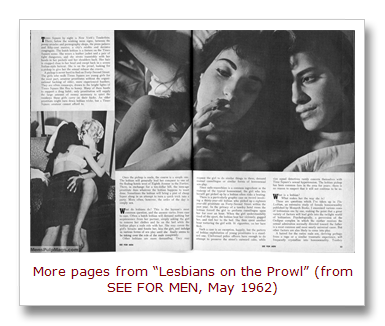 One of the things many red-blooded, “normal” American men wondered in the 1960s was “How many of them there homo lesbos dykes are out there anyway?”

“Dr. Morse” provides an answer, based on his own, er, experience:

According to Kinsey’s statistics, perhaps forty per cent of the women in the country have homosexual contacts at one time or another in the course of their lives. But one swallow doesn’t make a summer, and one night in bed with another girl does not assign a girl forever into the homosexual camp. On the basis of my own experience, I would tend to believe that fifteen to twenty per cent of the women in this country are practicing lesbians, but such a figure is open to argument. One cannot conduct a census.

Presumably, the assumption that one could “not conduct a census” was based on the not unreasonable belief that few men or women at the time would openly admit to being gay, given the social prejudice that existed. 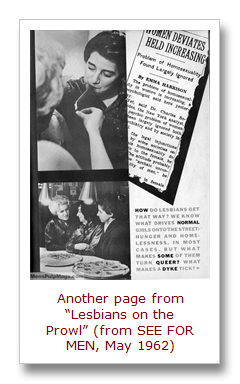 Like many gay sexposé articles in men’s adventure magazines, “Lesbians on the Prowl” claims the incidence of homosexuality is growing.

However, unlike most, it does not lay the blame on the erosion of traditional values and the growth of liberal, commie-pinko hedonism.

Instead, it puts forth a theory that would shock members of some conservative anti-gay groups.

…both lesbianism and male homosexuality are growing, particularly in large metropolitan areas. Authorities have theorized that the growth of homosexuality and the concomitant growth of right-wing politics are linked, both of them an expression in a sense of cultural sado-masochism. Be that as it may, it is certainly true that homosexuality is more often found in ultraconservative and fascist movements. Ernst Roehm’s brownshirt followers in Nazi Germany are an obvious case in point.

Perhaps the ultimate tribute to Block’s writing skills (and chutzpah) is that Dr. Morse was actually cited as a real expert by other writers. 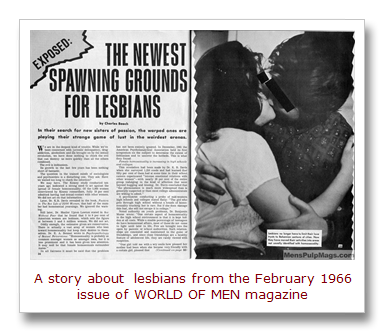 For example, in the story “Exposed: The Newest Spawning Grounds for Lesbians,” published in the February 1966 issue of WORLD OF MEN, author Charles Beach wrote:

A psychiatrist conducting a probe of mid-western high schools and colleges stated flatly: “The girl who gets through high school without a breath of homosexuality touching her is rare. But if she does manage this feat, she will not escape it in college.”
Noted authority on youth problems, Dr. Benjamin Morse wrote: “One certain aspect of homosexuality in the high school environment is that it is kept hidden at all costs. While a sizable percentage of teenagers do have homosexual affairs, most of these do not come to light until later in life. Few are brought into the open by parents or school authorities. Such relationships are concealed and maintained in the guise of friendships, and since close friendships are a healthy feature of adolescent life, they are rarely viewed with suspicion.”

Coming up in the next post, stories focusing on a favorite male fantasy topic involving lesbians: women in prison.

In the meantime, you can read another Sixties sexposé about lesbians by clicking this link to download a PDF copy of the December 1964 issue of MAN’S EPIC magazine.

It features the shocking story of “The Lesbian Epidemic — Our National Shame” along with many other over-the-top articles and pulp fiction yarns, including: “The Wild Escape of the Hungarian Harlots,” “Chained Nudes for the Devil’s Dungeon,” “The Rebel Nymphos Who Sank a Yankee Flotilla,” “Sin: Suburbia’s Favorite Sport” and “Love in a Suitcase Confessions of a Convention Queen.”

It also has a great cover by Bruce Minney and cool interior illustrations by John Duillo and Norm Eastman.

[Here are links to Part 1, Part 3 and Part 4 in this series about “Lesbians in Men’s Adventure Magazines]