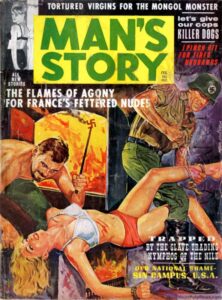 One of the most common words I see associated with men’s pulp adventure magazines published in the 1950s and 1960s is lurid.

The stories and artwork featured by magazines in this genre were generally more “shocking” and “sensationalistic” and “explicit” than what appeared in most mainstream media during the ‘50s and ‘60s.

But that was then.

When it comes to crimes, sex, violence and language, the typical content of even those magazines on the sleaziest end of the men’s adventure mag spectrum — the subgenre called “sweat magazines” — is considerably milder than that of many of today’s mainstream publications, TV shows and movies, let alone what’s on the Internet. 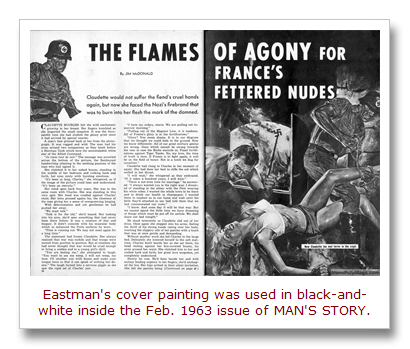 In fact, when read from today’s perspective (or at least from mine), many vintage sweat mags seem more campy and humorous than “lurid.”

MAN’S STORY was one of the longest-lasting sweat mags published by the Reese Publishing Company, Inc. It ran from February 1960 to December 1975.

It’s one of those politically-incorrect periodicals that regularly featured Nazi bondage and torture cover paintings, and the February 1963 showcases a great example by the grandmaster of Nazi B&T artwork, Norm Eastman.

In this Eastman cover, an iconic scantily-clad blonde is being tied up with rope on top of a flaming brazier by a Nazi soldier.

Meanwhile, another evil Nazi prepares to brand the poor girl with a red-hot branding iron shaped like a swastika.

The model for the blonde was probably either Eva Lynd or Shere Hite, two of Eastman’s favorite female models. 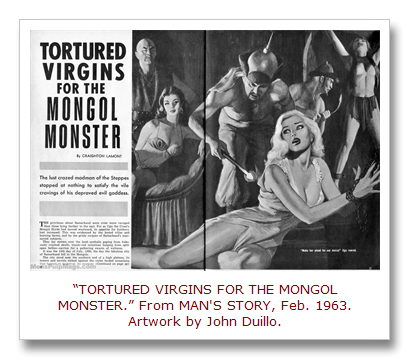 I lean toward thinking it’s Eva, though when I asked her about it in a recent email exchange we had, she said she wasn’t sure.

The Nazi wearing the helmet is based on the favorite male model of Eastman and many other illustration artists of the era: Steve Holland, the most famous male model in the realm of mid-20th Century pulp magazines and paperbacks.

Eastman probably used himself as the model for the bare-chested fiend with the branding iron.

This grand guignol style illustration goes with the story “THE FLAMES OF AGONY FOR FRANCE’S FETTERED NUDES.”

It’s also possible that “Jim McDonald” was a pseudonymous “house name” used for such stories penned by various pulp writers who were stringers for Reese and EmTee.

The “FETTERED NUDES” yarn is one of several in the February 1963 issue of MAN’S STORY that involves bondage and torture. In two, the victims are female. In another, the torturee is male. 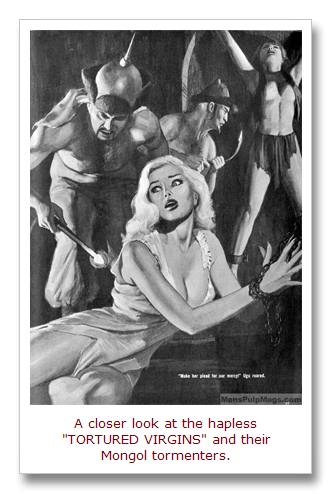 The other tale with female victims is titled “TORTURED VIRGINS FOR THE MONGOL MONSTER.” The text is credited to Craighton Lamont, another Reese regular (or an amazingly appropriate-sounding house name).

The artwork is uncredited, but looks like it may have been done by John Duillo, an artist who did many interior and cover paintings for men’s adventure magazines.

The sex-related passages in the “MONGOL MONSTER” story and others in this issue, and in similar men’s sweat mags of the early 1960s, are not what would now be called “explicit.”

They’re somewhat like sex-related scenes in mainstream movies from the same era. Suggestive, but not really explicit either in what they describe or in the choice of anatomical language.

For example, when the lead distressed damsel in “FETTERED NUDES” gets groped by leering Nazis, the text says:

“She felt their torturing hands probing the soft intimacies of her body. She willed herself to think of Charles.”

Descriptions of violence and torture in sweat mag stories go a bit further. They’re on the level of what began to be shown in horror movies in the 1960s.

The campiest B&T yarn in this issue is “TRAPPED BY THE SLAVE TRADING NYMPHOS OF THE NILE,” a faux true story that uses the old “as told to” gimmick to suggest that it’s non-fiction.

In this gonzo masterpiece (which features an initial two-page illustration that my friend, pulp art maven Rich Oberg, told me may also be by John Duillo), a manly American oil company employee gets captured by a mysterious group of women in Egypt.

During the course of the story he is staked-out, whipped with a riding crop, tormented with knives, ravished multiple times by said mysterious ladies and then put on a slave block to be sold.

It’s one of the those so-bad-it’s-good men’s pulp yarns that I may have to include in a future volume in the WEASELS RIPPED MY FLESH! anthology series.

And, if I ever do a volume that features sexy Civil War stories, I’ll have to include another story from this issue: “THE LAST RIDE OF THE REBEL JOY GIRL CAVALRY.” 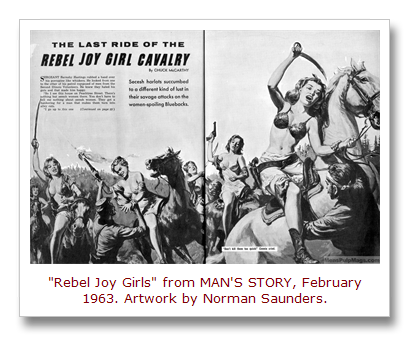 That story is credited to Chuck McCarthy, yet another Reese regular (or house name).

Unfortunately, as usual in the Reese magazines, the artwork is uncredited. But Thomas Clement, another illustration art maven I know and creator of the great American Art Archives site, has IDed it as a Norman Saunders illustration.

It’s quite an illo and quite a story. Yessiree! Brave, barely-clothed Rebel babes on horseback, taking on Union troops — and winning. (“Don’t kill them too quick!” says their leader Connie, in the caption.)

In my next post: more cool, crazy and campy stuff from the February 1963 issue of MAN’S STORY, including some of the culturally-interesting and kooky ads from the back pages, like this one for the “DESTINY LEAGUE,” a precursor of today’s online dating services.

In the meantime, if you want to read the whole issue yourself, click this link or the image below to download a high-resolution PDF copy of the entire issue in the MensPulpMags.com virtual newsstand.