My previous post here featured stories from the February 1963 issue of MAN’S STORY that were illustrated by three of the great pulp illustration artists who worked for men’s pulp adventure magazines in the 1950s and 1960s: Norm Eastman, John Duillo and Norman Saunders.

Today, such painted illustrations are probably the best-known and most popular elements of vintage men’s pulp mags.

In those periodicals, artwork was typically used for covers, interior illustrations for fiction yarns, and for the faux or heavily-fictionalized “true stories” that are another hallmark of the genre. 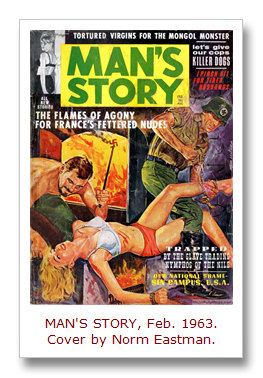 The editors generally used photographs, rather than artwork, for serious articles or personal reminiscences about 20th Century wars and battles, for hunting, fishing and travel stories, and for news-like articles such as exposés, true crime stories, Kinsey-style “sexology” reports, celebrity profiles, current event-related pieces, and advice or how-to pieces.

The February 1963 issue of MAN’S STORY includes some classic examples of the types of stories illustrated with photos.

My favorite is a sexposé (the shorthand term for a sex-related exposé) titled “OUR NATIONAL SHAME — SIN CAMPUS, U.S.A.”

As Stephen Colbert recently pointed out in a hilarious segment on THE COLBERT REPORT, the media has been “exposing” the sex lives of college students for many decades — and claiming, at any given point in time, that they’re wilder than ever before.

Colbert was riffing on an article published in the July 12, 2013 edition of the NEW YORK TIMES — “SEX ON CAMPUS: SHE CAN PLAY THAT GAME, TOO.”

He explained in his deadpan way that the NYT story contained the “breaking news” that women in college “enjoy the sex!”

“The girl who receives her degree with her virginity intact is becoming a rarity.”

Of course, in my opinion, no genre has done sexposés or Kinsey-style sexology stories quite as entertainingly as men’s pulp magazines.

One of the funniest parts of the “SIN CAMPUS” piece is its straight-faced explanation and defense of college panty raids.

The article portrays panty raids as a harmless, symbolic substitute for actual sex that should be tolerated rather than punished or discouraged, explaining…

“…the actual penetration into the girls’ dormitory has all the sex overtones of rape, but, legally and at worst, it’s only trespass. The bearing away of the delicate silken garment which once caressed the loins of the innocent co-ed is the hunter’s trophy. Actually, its very fragility and sensuality makes it a symbol of the maidenhead. Therefore, the virile attacker has taken the maidenhead…simply by carrying away a pair of panties!

Do the girls object? They hang their panties temptingly out of the window at the first rumor that a panty raid is to take place-offering the virginity! Of course the colleges object to this kind of activity on the part of their students. They have no choice but to condemn riot. However, many an educator breathes a secret sigh of relief that so much sex-generated steam has been let off with so little real harm.”

There are two other classic sex-related stories in the February 1963 issue of MAN’S STORY that are typical of men’s adventure magazines.

One is the confession-style male gigolo shocker “I PINCH HIT FOR TIRED HUSBANDS.” The other is a pseudo-scientific sexology advice piece about how men can improve their performance, titled “ARE YOU A LOVE WEAKLING?”

The latter is credited to Gabriel Morrell, M.D., which I suspect is a pseudonym for some professional writer who made ends meet by cranking out pulpy sexology stories, like writers Lawrence Block and Robert Silverberg once did back in the day. (To see examples of theirs, check out my previous posts “Lesbians in Men’s Adventure Magazines”  and “Lesbians on the Prowl.”)

One of the best stories in this issue is about the legendary fighting musicians who held the line against a German attack during a pivotal World War II battle near Salerno, Italy in September 1943.

I don’t know if Ex-T/5 Lake was a real person or if the story is a fictionalized account by Brand. But the battle at the hill dubbed “Piccolo Peak” was definitely real.

The hill got its nickname when US Fifth Army Commander Lt. Gen Mark Clark ordered the regimental band to help defend an American position there that was on the verge of being overrun by Germans. 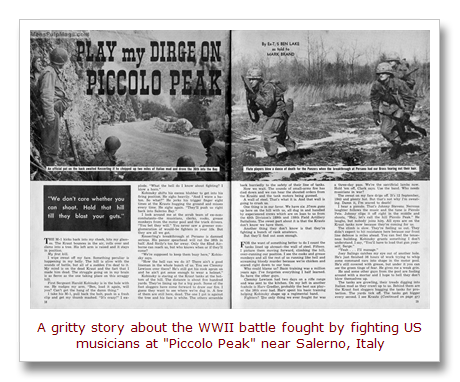 The grunt’s-eye account of that battle in MAN’S STORY is well-written and graphic. At one point, it’s literally gut-wrenching:

“I pump lead into two more Krauts as they try to overrun us. But I’m not quick enough to get a third who sinks his bayonet into Kobinsky’s chest. I swing my rifle around and jab it into the Kraut’s groin. He screams, yanking his own blade out of Kobinsky to finish me. He has the bloody thing raised over my head. I can’t get my weapon out of his groin. In desperation I pull the trigger. The force of the charge sends him rolling down the hill, his entrails spilling out of his pants like a slimy worm. . . .”

Like most men’s adventure magazines published from the early ‘50s to the mid ‘60s, this issue of MAN’S WORLD includes several “cheesecake” photo spreads (a.k.a. glamour or pinup photos). Such photos featured models who were scantily-clad, but generally eschewed blatant nudity.

The most notable model in the February 1963 issue of MAN’S STORY is Swedish blonde Annette Dahl. Dahl was a minor celebrity in Europe who sang in jazz bands and starred in the 1970 Belgian film L’ÎLE AUX COQUELICOTS (THE ISLAND OF POPPIES) with the popular singer-songwriter Salvatore Adamo.

No trace of the other two models, Dina Frank and Barbara Taut, showed up in the Google searches I did, even though Dina is said to have been a “busy actress” in the text used for her photo spread. 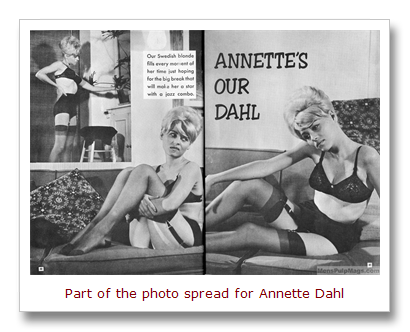 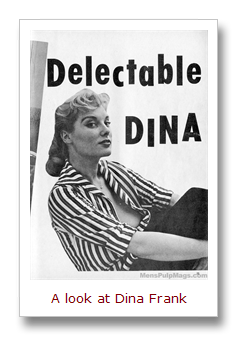 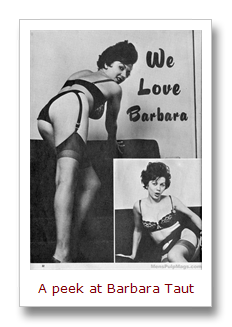 The ads in this issue of MAN’S STORY are the usual assortment found in low budget men’s pulp adventure magazines: “self-improvement” ads for correspondence school courses, baldness cures, trusses, body building training, and so forth; ads for sexy books and sex manuals, nude photos, stag films and lingerie; ads for the latest gadgets; and, ads for cheap real estate in fast-growing states like Florida and Nevada.

My favorites in the February 1963 issue of MAN’S STORY are ads for: 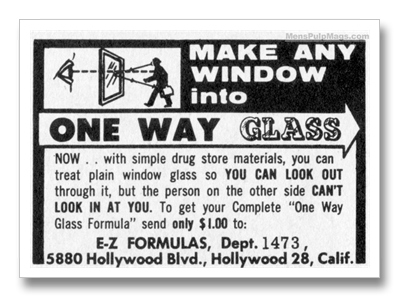 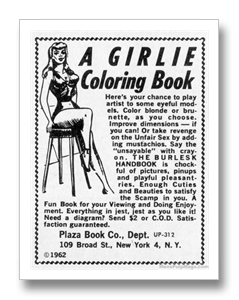 Along with the gonzo stories mentioned in my previous post (like “TRAPPED BY THE SLAVE TRADING NYMPHOS OF THE NILE” and “THE LAST RIDE OF THE REBEL JOY GIRL CAVALRY”), the stories and ads shown in this post make the February 1963 issue of MAN’S STORY one of my personal faves.

If you’d like to read it for yourself, click this link to the MensPulpMags.com virtual newsstand or the image below to download a high resolution PDF copy of the entire issue.

Coming up in the next post…Well, I don’t know yet. But I do know it will include more cool pulp art, stories and retro pop culture artifacts like those featured in this post and in the WEASELS RIPPED MY FLESH! anthology.

Robert F. Dorr talks about his classic war and adventure stories in A HANDFUL OF HELL – PART 1…