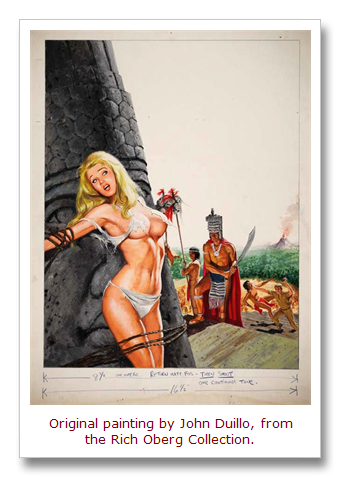 In a recent conversation with men’s adventure art collector Rich Oberg, we discussed the fact that most of the vintage “sweat magazine” cover paintings in his collection have rarely been seen. (We apply the term “sweat magazines” to the outré subgenre of men’s adventure magazines that regularly featured bondage and torture cover art and stories, though some people use it more generally to refer to all men’s adventure periodicals.)

After our conversation, Rich sent me photos of some of the original B&T sweat mag cover paintings he owns, so we could do a series of posts on this blog. 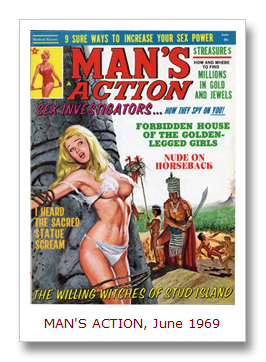 Our first post in the series featured covers by Mel Crair.

During the final decades of his life, he was widely known and highly respected for his historical artwork, particularly his Civil War art and his Western paintings and etchings.

Indeed, for some time, Duillo was President of The Society of American Historical Artists. His history-themed paintings and prints are still popular and sold in fine art galleries and online.

But, like many working artists, Duillo spent much of his career doing more commercial illustration art, especially book and magazine covers.

According to the bio about him on the RoGallery site, Duillo’s cover paintings appeared on an estimated 500 paperback books.

Quite a few of those were Westerns, including some by top Western authors like Zane Grey, Max Brand and Louis L’Amour. Duillo also painted covers for many pulpy mystery, detective and “sleaze” paperbacks, as well as science fiction and fantasy covers. If you’re a Conan the Barbarian buff, you probably recognize some of the covers he did for the classic Conan series published by Lancer Books, which also featured covers by fan-favorites Frank Frazetta and Boris Vellejo. 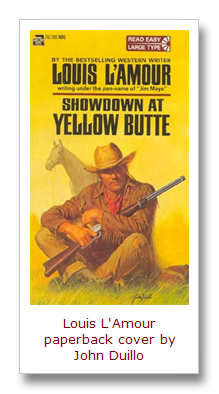 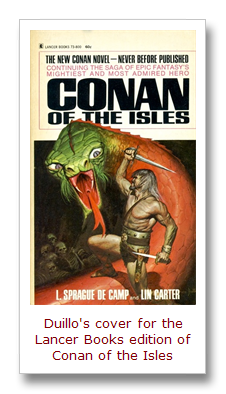 John’s wife Elaine Duillo is also a talented and prolific artist whose paintings appear on hundreds of book covers.

She’s best known for her Gothic and romance paperback covers — and for being the first artist to feature the male model Fabio in her cover paintings. 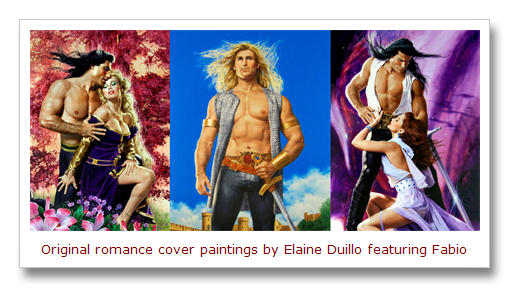 She was also one of the few women artists who provided artwork to men’s adventure magazines.

That’s due in part to the fact that John and Elaine were both represented during part of their careers by the artist and artist’s agent Ed Balcourt. Balcourt is a legendary figure in the world of illustration art who represented many men’s pulp mag and paperback artists. (There’s a great article about him by writer and pulp art maven Gary Lovisi in Issue Number Thirty-Two of Illustration magazine.)

Some of John and Elaine Duillo’s paperback covers are pretty wild. But none are quite as over-the-top as the bondage and torture cover paintings John did for men’s sweat magazines in the 1960s and early 1970s.

The John Duillo painting at the top of this post is a great example of an exotic adventure B&T sweat cover. In it, blood-crazed natives are the ones doing the binding and torturing of a beautiful, busty babe, rather than evil Nazis.

That eye-pooping painting was used on the cover of the June 1969 issue of Man’s Action.

It goes with the gonzo adventure yarn inside “I HEARD THE SACRED STATUE SCREAM.”

Duillo’s painting for the cover of the December 12, 1962 issue of Men Today — portraying a scene from the story “A CRYPT OF AGONY FOR THE SCREAMING BEAUTIES OF BELGIUM” — is in the more common Nazi bondage and torture category. 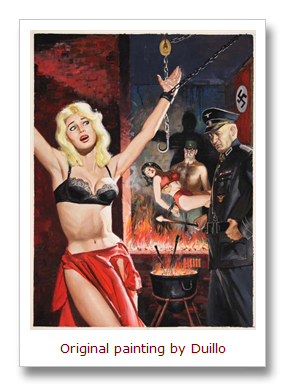 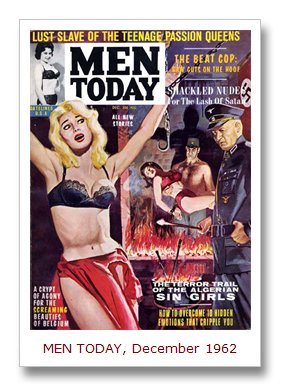 The Duillo painting featured on the October 1964 issue of Men Today gives us a look at the horrible fate facing “THE SILK PANTIES PLATOON WHO BROKE CASTRO’S BLOCKADE.” One of the unfortunate (and, as usual, scantily-clad) damsels in that one is being garroted by a Fidel Castro lookalike. Another is being dunked head-first by a different Castro clone, using a demonically-creative water torture device.

Stories and cover paintings that featured evil Cuban Commies were fairly common in men’s adventure magazines in the 1960s. In case you missed the series of three posts I did about other great examples, here are links to Part I, Part II and Part III. 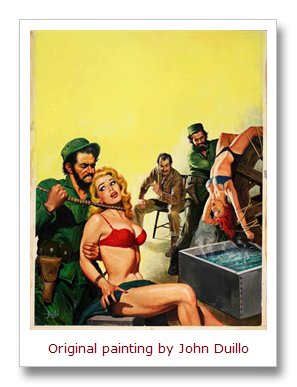 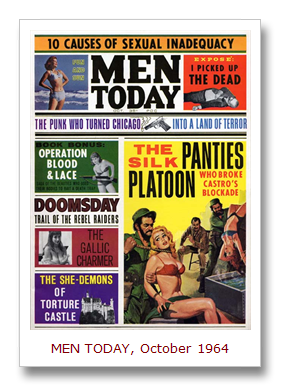 The hapless (and, of course, gorgeous and well-endowed) nurses shown in the painting Duillo created for the cover of the April 1968 issue of Man’s Book are “STRIPPED VIRGINS FOR THE TORCH OF TORMENT.” That’s a “torchure” apparently devised by evil Japs. 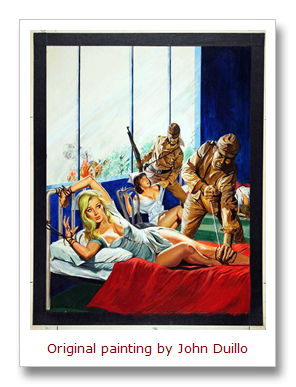 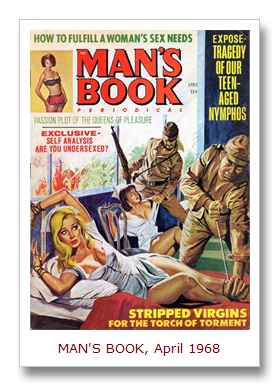 Thanks again to Rich Oberg for allowing me to post another set of rarely seen original men’s adventure art from his collection. In the next post, I’ll show you some more of Rich’s pulp treasures.