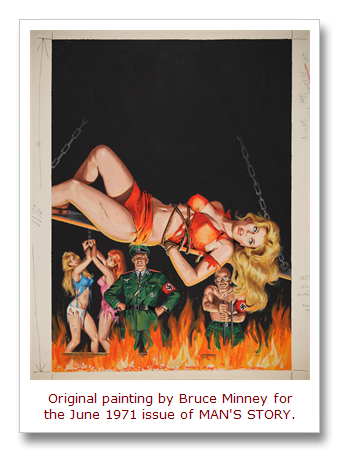 Today’s post is the third in a series showing original men’s “sweat magazine” cover paintings from the Rich Oberg Collection (courtesy of Rich).

The first post in the series featured cover art by Mel Crair. The second focused on covers by John Duillo. Crair and Duillo both did hundreds of cover paintings and interior illustrations for men’s adventure magazines from the late 1950s to the mid-1970s.

The initial version of the post I did about Duillo included the painting shown at left. It’s an unsigned painting, but Rich and I both thought was by Duillo.

After I put up the post, I got an email from a reader of this blog named James, who has an incredible eye and in-depth knowledge about men’s adventure artists.

“I’d like to thank you for posting those John Duillo covers from the Oberg archives,” James said, “but the cover of Man’s Story, June 1971, was definitely painted by Bruce Minney. He used a much harder brush-stroke than Duillo did (although nowhere near as hard as Norm Eastman). Another clue is the typical ‘Minney gap’ between the bottom of the nose and the top of the lip on the model’s face.”

I sent the note from James to Rich Oberg. 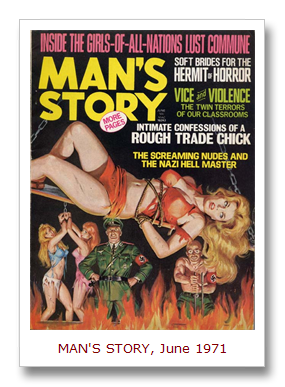 Rich double-checked the provenance of the painting with the dealer he bought it from, then told me: “James is right. It’s a Minney. Great call! Give that man a cigar! This doesn’t happen very often and I love it. Minney covers are even harder to come by than Duillos, though neither are abundant.”

So, today’s post starts with the correctly-credited original painting that artist Bruce Minney created for the June 1971 issue of Man’s Story, one of the classic men’s sweat magazines. (Some people call all men’s adventure magazines “sweat magazines,” but Rich Oberg and I apply that term only to the lurid subgenre that regularly featured covers combining “Good Girl Art” with over-the-top bondage-and-torture scenes.)

The June 1971 Minney cover went with the tastefully-titled story inside, “THE SCREAMING NUDES AND THE NAZI HELL MASTER.”

As noted in a brief bio on the AskArt site, Minney was born in 1928 and lived in New York City. He did hundreds of covers and interior illos for men’s adventure magazines, as well as many paperback covers. He also worked as storyboard artist for NBC.

Below is another Bruce Minney Nazi B&T painting from the Oberg Collection.

It was used on the cover of the March 1970 issue of Men Today. 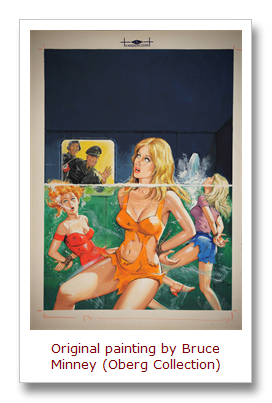 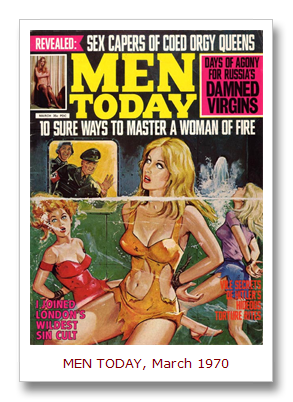 Next up are examples of sweat mag paintings by some other highly talented and prolific illustration artists.

The one below, by Walter Popp, features the return of the sexy Screaming Nudes. This time, they’re on the cover of the September 1972 issue of Men Today and starring in the story inside, “SCREAMING NUDES FOR HITLER’S MINISTRY OF TERROR.”

As noted in the page about Walter Popp on the American Art Archives site (one of my favorites), Popp started out doing artwork for comics in the 1940s. In the 1950s, 1960s and 1970s, he created cover paintings and illustrations for the last of the all-fiction pulps, men’s adventure magazines, detective and mystery mags, mainstream periodicals and paperbacks. 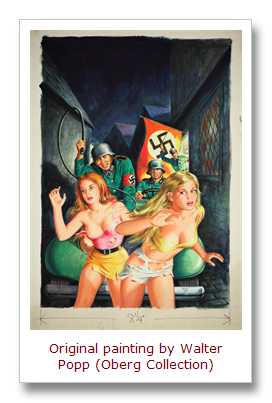 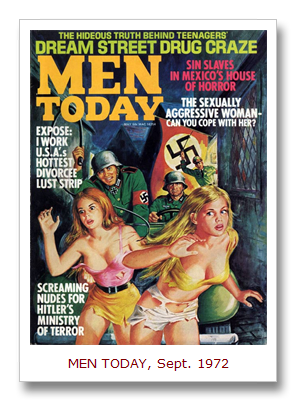 Next, here are some wild originals from the Oberg Collection by Vic Prezio, another artist who created superb illustration art for many genres, from comics and men’s adventure magazines to paperbacks and classic monster magazines, like Creepy and Eerie.

The first one shows a damsel in distress falling headlong toward certain death after being pushed out of a plane by a Nazi bastard. 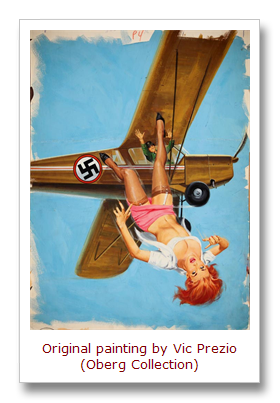 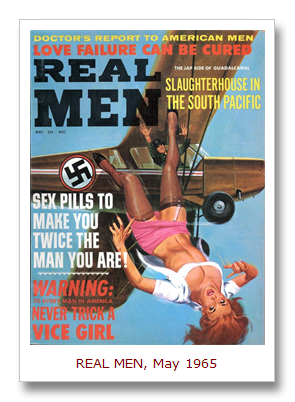 In the Vic Prezio painting below, evil Japs are the bad guys instead of evil Nazis. Like many men’s pulp mag cover paintings, this one was used on two different magazines. 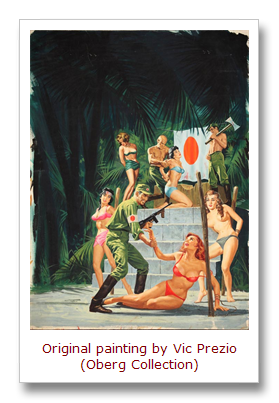 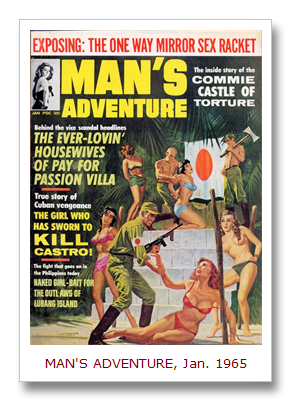 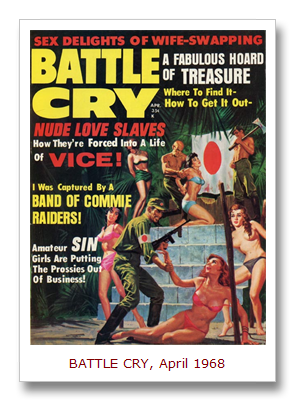 Coming up in the next post, a look at some more rare men’s pulp magazine art from the Rich Oberg’s incredible collection.