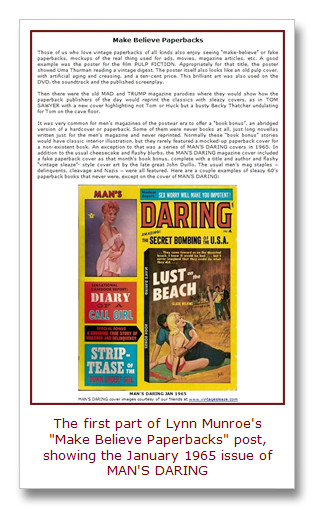 EDITOR’S NOTE: Here’s a look back at a previous post on this blog that needed some updating…

Lynn Munroe is one of the world’s top experts on vintage paperback books, especially hardboiled mystery and “sleaze” paperbacks.

His website, Lynn Munroe Books, is a must-see for fans of pulp fiction and pulp art.

Although Lynn’s main focus is on pulp paperbacks, he also knows a lot about the related genre of vintage men’s pulp adventure magazines.

Recently, I was inspired to do a post on this blog by a page I’d seen on Lynn’s site regarding “Make Believe Paperbacks.”

He mentions a number of examples from movies and humor magazines.

But the two examples he featured that particularly caught my attention were from vintage men’s adventure mags. 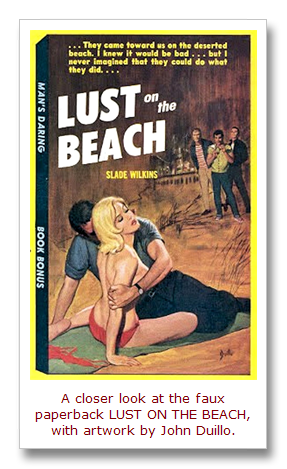 Some are condensed versions of real books. (One I featured in a previous post here is the condensed version of the novel HIS MAJESTY O’KEEFE, published in the April 1954 issue of SPORT LIFE magazine. It includes a superb set of illustrations by artist Mort Kunstler.)

But the examples Lynn Munroe focused on in his “Make Believe Paperbacks” page are in a unique category limited to a handful of issues.

“It was very common for men’s magazines of the postwar era to offer a ‘book bonus’, an abridged version of a hardcover or paperback. Some of them were never books at all, just long novellas written just for the men’s magazine and never reprinted. Normally these ‘book bonus’ stories would have classic interior illustration, but they rarely featured a mocked-up paperback cover for a non-existent book. An exception to that was a series of MAN’S DARING covers in 1965. In addition to the usual cheesecake and flashy blurbs, the MAN’S DARING magazine cover included a fake paperback cover as that month’s book bonus, complete with a title and author and flashy ‘vintage sleaze’- style cover art by the late great John Duillo. The usual men’s mag staples – delinquents, cleavage and Nazis – were all featured.”

One is the January 1965 issue. It features the supposed cover of a racy paperback titled LUST ON THE BEACH.

Authorship is credited to Slade Wilkins, a pseudonym for some unknown pulp writer.

Lynn’s second example is the May 1965 issue of MAN’S DARING. The make believe paperback on that one is a Nazi bondage tale. It’s titled STRIPPED FOR THE SWASTIKA and credited to Fred M. MacGuire (which I’m pretty sure is another pen name). 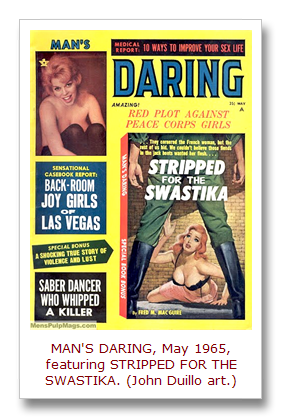 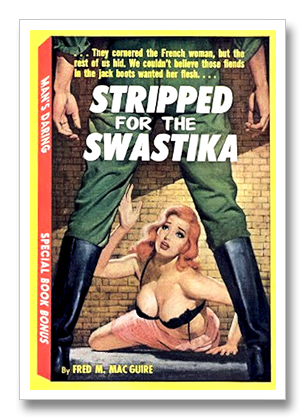 After reading Lynn’s post, I searched through my own collection and talked to my friend Rich Oberg, the noted illustration art collector and co-author of the book MEN’S ADVENTURE MAGAZINES.

We found three more MAN’S DARING issues published in 1965 that had spurious paperbacks on their covers. They also featured artwork by John Duillo.

The “MAN’S DARING BOOK BONUS” on the cover of the March 1965 issue is the CASE OF THE FRENCH GIRL BUTCHER, a murder mystery credited to “J. Greaves.” 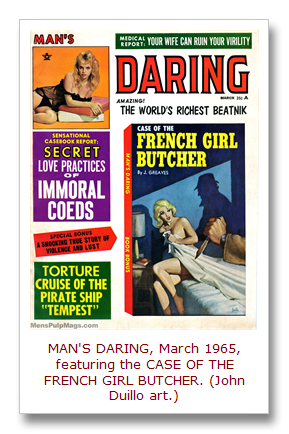 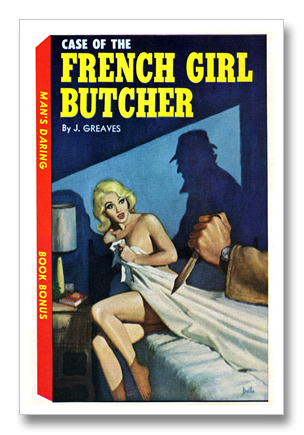 The “Book Bonus” featured on the cover of the July 1965 issue is BLONDES IN RED BONDAGE, an outré tale about busty blondes who are abused by sadistic Commies. (Communists were second only to Nazis as the villains in men’s adventure magazine stories, especially when bound and tortured babes were involved.) The author is given as Mark Stanson, yet another pseudonym. 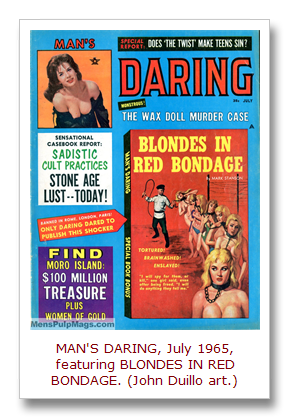 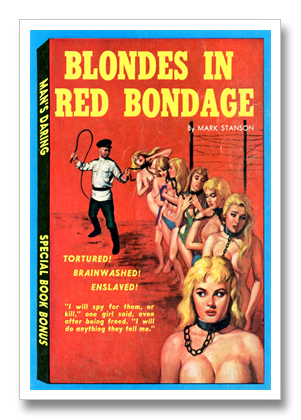 The last of the MAN’S DARING issues that featured make believe paperback covers was published in September 1965.

It has what I think is the coolest of John Duillo’s fake paperback cover paintings: a scene showing two young, er, ladies in bikinis who are cracking bullwhips while riding on the shoulders of beefy surfer dudes.

The illusory “book” this was created for is THE SURFBOARD JUNGLE. I assume that title is an homage to the seminal 1955 novel about teenage juvenile delinquents THE BLACKBOARD JUNGLE by Evan Hunter (who later became best known by his pen name Ed McBain).

The subhead of the 2-page interior spread for this story says: “With fists and whips these savage girls and men turned a beautiful stretch of sandy shore into Hell’s Beachhead!”

Yowza! THE SURFBOARD JUNGLE would have made a helluva good low-budget drive-in movie! 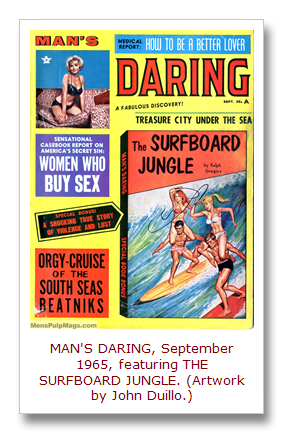 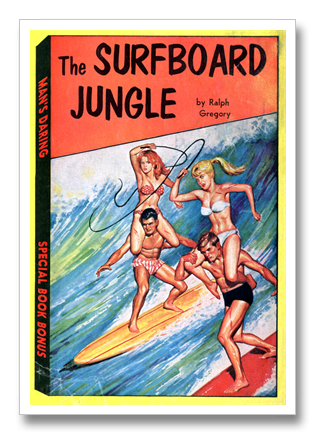 Another men’s pulp adventure magazine that has a cool make believe paperback on the cover is the July 1967 issue of MAN’S TRUE DANGER.

This isn’t just a coincidence. MAN’S DARING and MAN’S TRUE DANGER were both published by Candar Publishing or a sub of Candar throughout their runs. 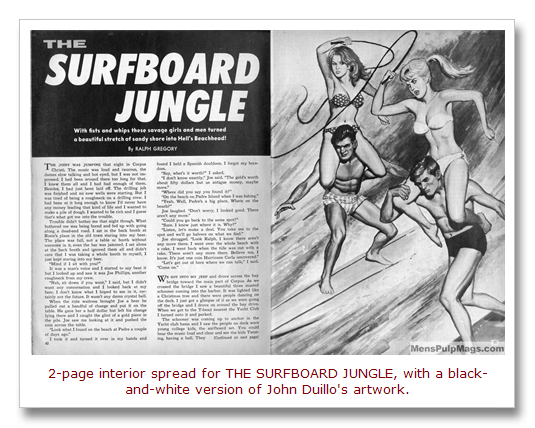 “Chief gunner’s mate Will Johnson is perhaps the only man in Naval history who, single-handed, and without weapons, is credited with the sinking of an enemy submarine. That he was able to accomplish this feat was fantastic. That he is alive to tell about it, is a miracle.”

Of course, there was no such American sailor and the name of the writer he purportedly told his whale of a tale to is probably equally fictitious.

But like most men’s adventure magazine stories, it’s a lot of fun to read. 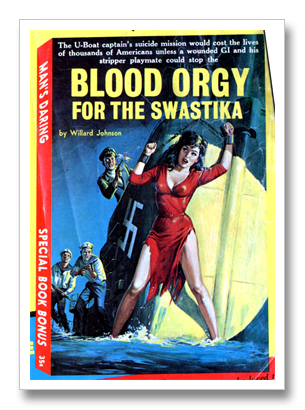 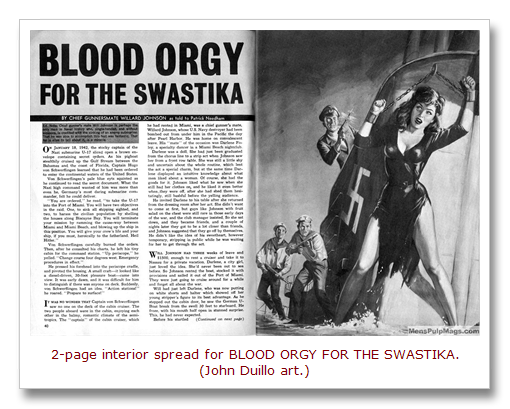 How could it not to be fun to read a story that includes paragraphs like this:

“Will had just left Darlene, who was now putting on white shorts and halter which showed off her young stripper’s figure to its best advantage. As he stepped out the cabin door, he saw the German U-Boat break from the swell 30 feet to starboard. He froze, with his mouth half open in stunned surprise.”

By the way, if you like biker movies, check out our latest book in the Men’s Adventure Library series, BARBARIANS ON BIKES. It’s a full-color archive of classic men’s adventure magazine covers and interior illustrations and photos featuring outlaw biker gangs. 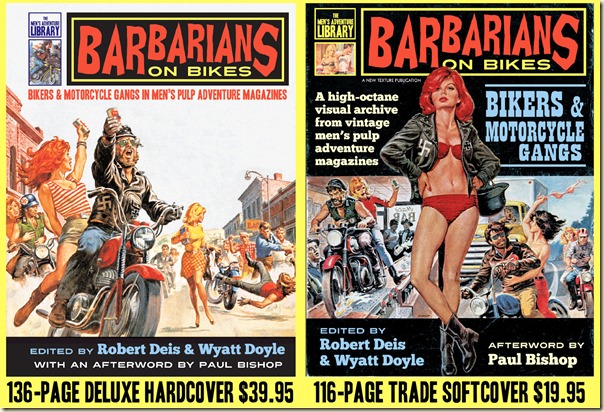