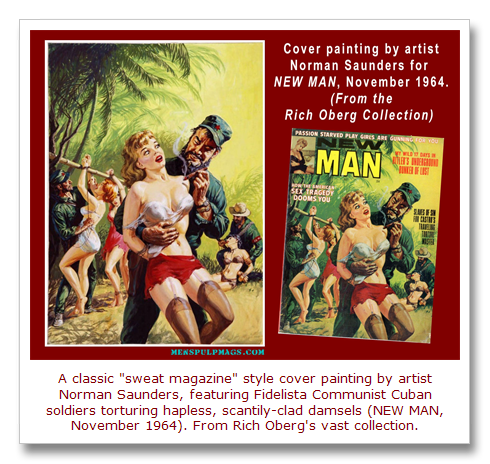 Recently, I’ve been reading stories in men’s adventure magazines from the 1950s, 1960s and early 1970s about Fidel Castro, the Cuban Revolution and the first decades of Cuba’s Communist era under Castro.

Given the new warming of relations between the United States and Cuba and the fact that I live near Key West, which has deep cultural and historical ties to Cuba, I find Cuba-related stories particularly interesting.

A classic example is the one Norman Saunders painted for the cover of NEW MAN, November 1964. (Now in the awe-inspiring collection of men’s adventure magazine artwork owned by my MAM mentor and friend Rich Oberg.)

That Saunders cover goes with the titillating tale “SLAVES OF SIN FOR CASTRO’S TRAVELING TORTURE MASTER.”

It’s one of many sweat mag fiction yarns about evil Fidelistas who torment barely-clothed babes and then, typically, get their just desserts at the end of the story.

But those are just one subset of the Cuba-related stories you find in men’s adventure magazines.

From the early 1950s to the genre’s decline in the mid-1970s, MAM periodicals featured scores of stories about Cuba.

Some are pure fiction. Some are fact-based but highly stretched and sensationalized. Some are surprisingly straightforward news articles.

Taken together, these stories provide a unique and fascinating look at Fidel Castro, the Cuban Revolution, and the pre- and post Revolution eras in Cuba. 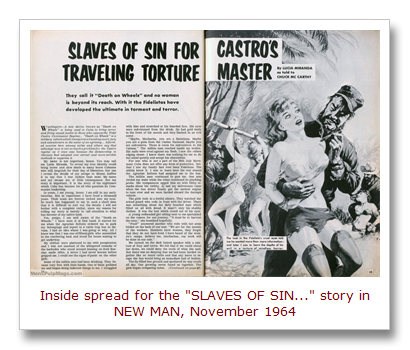 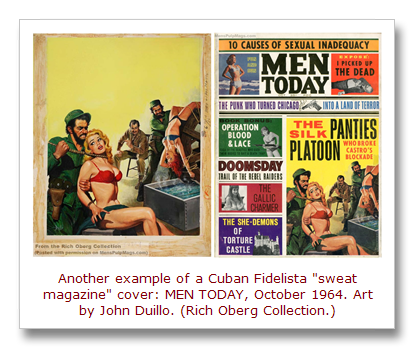 One of the most noticeable things about the stories is how their basic viewpoint changed over time.

Cuban politics were not high on MAM radar screens though most of the 1950s.

During much of that decade, the majority of men’s adventure magazine stories about Cuba were about the glitzy (Mob run) casinos and other types of, er, nightlife in Havana, which made it a tropical precursor of Las Vegas that attracted millions of tourists. 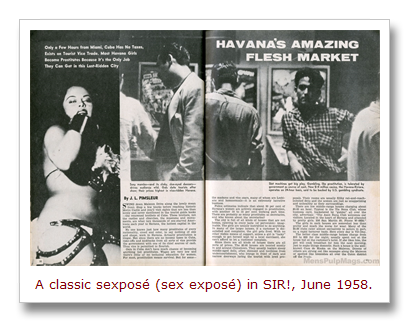 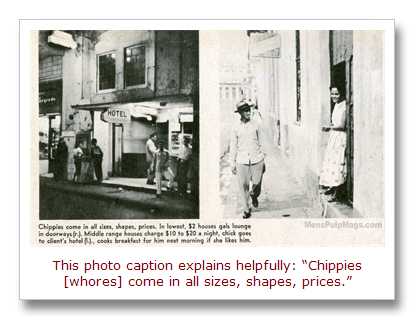 The subhead and captions for the photographs laconically sum up the common thrust of such stories:

“Only a few hours from Miami, Cuba has no taxes, exists on tourist vice trade. Most Havana girls become prostitutes because it’s the only job they can get in this lust-ridden city.” 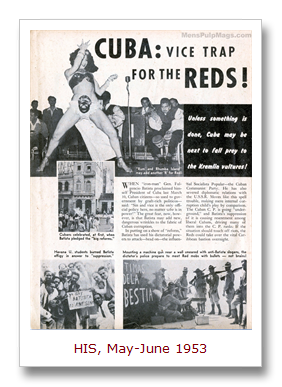 “Gambling, like prostitution, is tolerated by government as source of cash. New $14 million casino, the Havana-Riviera, operates on 24-hour basis, said to be backed by U.S. gambling syndicate.”

“Chippies [prostitutes] come in all sizes, shapes, prices. In lowest, $2 gals lounge in doorways. Middle range houses charge $10 or $20 a night, chick goes to client’s hotel, cooks breakfast for him next morning if she likes him.”

Relatively few men’s adventure magazine stories published in the early and mid-1950s focused heavily on the political situation in Cuba.

Those that did usually acknowledged the growing consensus that Cuban President Fulgencio Batista was a corrupt and brutal dictator who catered to (and raked in money from) wealthy Cuban businessmen, US corporations that operated in Cuba, and American mobsters who owned the big Havana casinos – while trying to ignore the severe poverty faced by most Cubans and suppress any political opposition or dissent.

One of the earliest men’s adventure magazine stories I found that reflects this is an intriguing one-page news brief in the May-June 1953 issue of HIS magazine. The headline describes Cuba as a “VICE TRAP.” The caption of the lead photo, showing a sexy dancer in a nightclub, calls it the “Rum and Rhumba” island.

But the focus of the story is actually on the growing political backlash against Batista.

And, although the timing was a bit premature, the conclusion of the story now seems prophetic. It says:

“Batista has used his dictatorial powers to attack—head on—the influential Socialista Popular—the Cuban Communist Party. He has also severed diplomatic relations with the U.S.S.R. Moves like this spell trouble, making mere internal corruption child’s play by comparison. The Cuban C. P. is going ‘underground,’ and Batista’s suppression of it is causing resentment among liberal Cubans, driving many of them into the C. P. ranks. If the situation should touch off riots, the Reds could take over the vital Caribbean bastion overnight.”

A photo at the bottom of the HIS story show Havana University students burning an effigy of Batista. Another shows heavily-armed government soldiers next to a wall painted with anti-Batista graffiti. 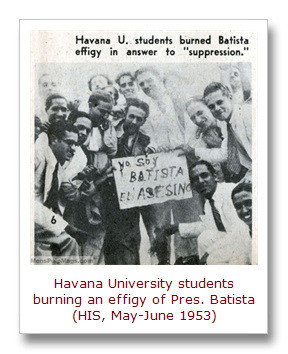 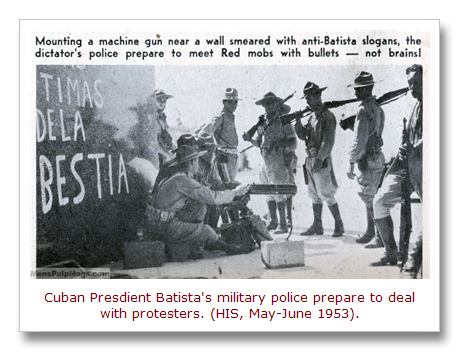 The covers of those issues of SIR! and HIS don’t feature Cuba-related illustrations. But they are very cool, so here’s a look for those who may be curious. 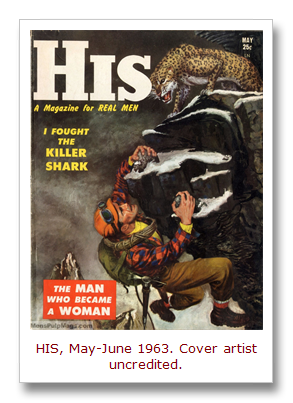 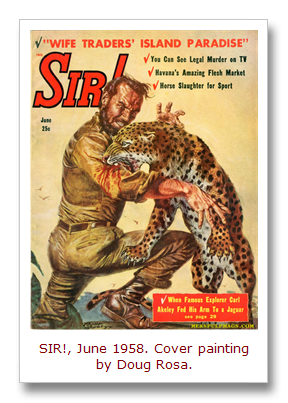 Unfortunately, there’s no artist credit for the HIS cover. 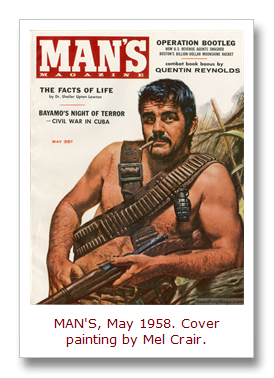 I’m hoping someone who sees this post can ID the artist.

If you can, please drop by the Men’s Adventure Magazines Facebook group and let me know.

Stories about the increasing political turmoil in Cuba began to appear with some frequency in MAMs and the mainstream media between 1956 and 1959.

Those were the final few years of the revolution led by Fidel Castro.

And, at that point, several things had become fairly clear.

Most observers recognized that Cuban president Fulgencio Batista was a bad guy.

Most understood that the majority of people in Cuba had good reasons for rebelling against him.

By 1957, it was also apparent that Castro and his ragtag but growing guerrilla army actually posed a serious threat to Batista.

Fidel and his top aides, such as his brother Raúl Castro and Ernesto “Che” Guevara, and the male and female fighters who followed them were often portrayed sympathetically by the American media, including men’s adventure magazines, during the late 1950s.

A good example is the fact-based story “Bayamo’s Night of Terror.”

It was published in MAN’S MAGAZINE, May 1958 (an issue that has a superb cover painting depicting one of Castro’s rebel soldiers by artist Mel Crair). 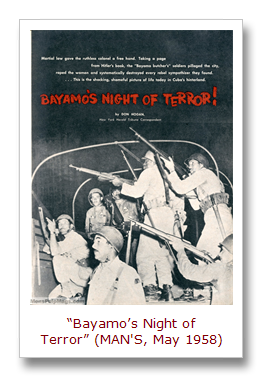 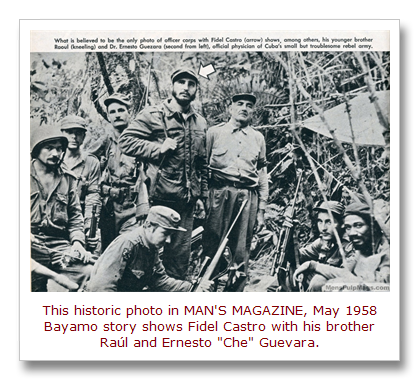 The story features one of Batista’s most infamous military henchmen, Col. Fermin Cowley. Cowley and his soldiers terrorized, tortured, killed and raped their way through Bayamo and other towns in 1957, in an effort to root out supporters of Castro.

In addition to recounting the series of bloody events that earned Cowley the nickname “Butcher of Bayamo,” the MAN’S MAGAZINE story includes details that you won’t find in mainstream publications.

According to the story, the widows and mothers of nine of the local men Cowley had killed were forced to look at photographs of their dead husbands and sons. It adds:

“Each man had been castrated and on each shoulder had been placed the amputated parts, where they would be plainly seen.”

The story ends by describing Cowley’s fitting end. In November 1957, he was ambushed and assassinated in a hail of bullets by Castro partisans. His killing was reported US newspapers the next day. The Associated Press story about the incident included the Batista regime’s official spin, which was that Cowley was killed “in a plot organized by terrorist elements.” 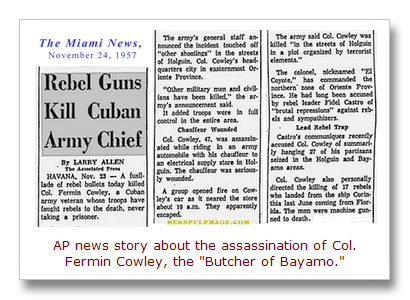 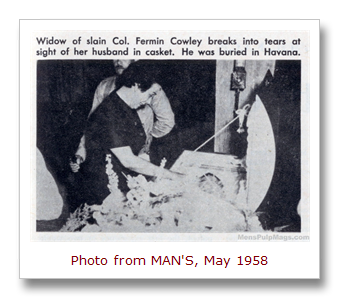 Such stories help shed light on why Castro and the Cuban Revolution received positive news coverage and attracted many supporters in the United States in the late 1950s.

By 1957, American reporters were competing to be among the first to visit Fidel and his men in their remote hideaways in the Sierra Maestra mountains. One of the first to succeed was Andrew St. George, a freelance stringer for CAVALIER, one of the top tier men’s adventure magazines.

His story in the October 1957 of CAVALIER, “HOW I FOUND CASTRO, THE CUBAN GUERRILLA,” was a huge scoop. Alas, I don’t have that issue, but you can read the text online on the CAVALIER archive site.

I do have the February 1961 issue of MAN’S MAGAZINE, which includes the reminiscences of another one of the first reporters to interview Castro in his mountain hideaway, Chicago reporter Ray Brennan. 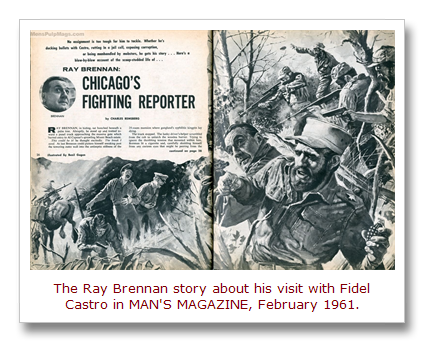 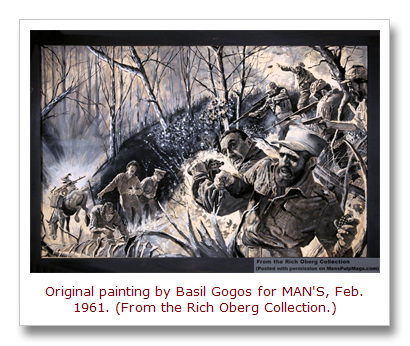 It’s illustrated with an amazingly cool painting by the great Basil Gogos and it’s another great piece of MAM artwork that now resides in the Rich Oberg Collection.

Coming up in my next post, a look at some more men’s adventure magazine stories about Fidel Castro, the final stages of the Cuban Revolution and the early years of Castro’s dictatorship.

“YANK ACE WHO BATTLED THE JAPS OVER PEARL HARBOR.”