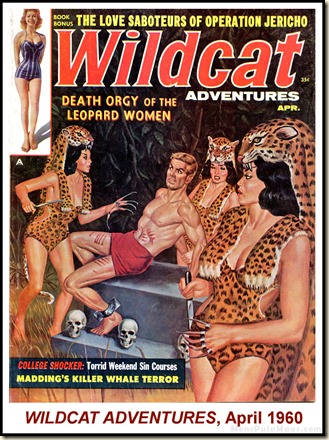 I have a love-hate relationship with the men’s adventure magazine WILDCAT ADVENTURES.

It’s actually a good, pulpy, old-style horror yarn. And the cover painting that goes with it is even better.

The scene depicts a scratched-up, near-nude dude about to be sacrificed by Leopard Women. The ladies are wearing snazzy leopard skin swimsuits, matching headgear and metal claws.

The cover painting was also used inside, flipped horizontally, in black-and-white.

Unfortunately, like most of the artwork in issues of WILDCAT ADVENTURES, the illustration is uncredited.

That’s the thing I hate about WILDCAT ADVENTURES.

For a fan of illustration art, like me, artwork with no artist credit or signature creates a frustrating mystery.

After you’ve looked at a lot men’s adventure mag illustrations that are credited or signed, you begin to be able to eyeball an uncredited illo and know who the artist was, or at least make a good guess.

My guess on the artist who did the cover painting for the April 1960 of WILDCAT ADVENTURES is Basil Gogos.

As shown in the interview with Basil I posted here a while ago and other previous posts, Basil did several great WILDCAT ADVENTURES cover paintings, including the one used for the cover of the highly-prized first issue of the magazine.

That first issue, Volume 1, No. 1, includes a “Booklength Bonus” version of the legendary novel JUNKIE by William S. Burroughs, illustrated with artwork by another top notch illustrator, John Severin.)

Some of Basil Gogos’ men’s adventure magazine illos are pretty easy to ID. 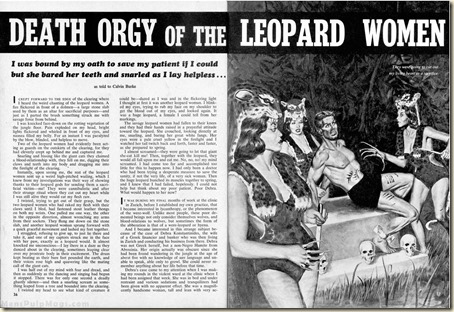 But Basil used a few different styles for his men’s adventure magazine illustrations and all of them were different than the colorful, signature style he later used for the monster portrait artwork he’s best known for.

For example, he didn’t sign the painting on the coveted premiere issue of WILDCAT ADVENTURES. But I guessed it was his work and he confirmed to me that he did it when I asked him.

So, the lack of a signature doesn’t rule out Basil Gogos as the artist who did the Leopard Women cover on the April 1960 issue.

And when I compared it to some of the WILDCAT ADVENTURES covers I know are his, it seemed like a Gogos cover to me.

Since I couldn’t be totally sure, I messaged Basil via his Facebook page and asked him.

This time he responded: “I may have painted it. I am not completely sure.”

Ah, well. If even Basil is unsure, it remains a mystery.

It’s one of the many “as told to” stories that appeared in men’s adventure magazines. 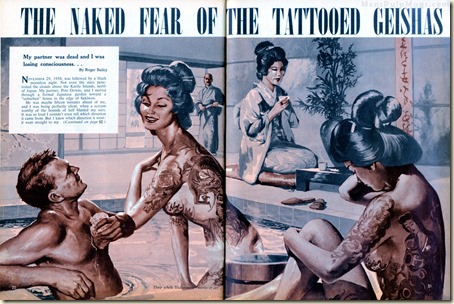 The “as told to” device is usually intended to make it seem like some first person account is a true story told to a professional writer.

The byline for the Leopard Women yarn says “As told to Calvin Burke.”

I think “Calvin Burke” is probably a pseudonym for some staff writer or a stringer who wrote regularly for the men’s adventures magazines published by Candar publishing, which included WILDCAT ADVENTURES, MAN’S ACTION, MAN’S DARING and MAN’S TRUE DANGER.

I did some in-depth searching on the internet. I‘m pretty good at. I couldn’t find any references to a writer named Calvin Burke or any other stories or books credited to him.

Whoever he was, I like the story a lot.

We almost included it in the first volume in our growing Men’s Adventure Library series, the WEASELS RIPPED MY FLESH! anthology, but it lost out to “I WAS A SLAVE OF A SAVAGE BLONDE.”

Another story about deadly women in the same issue of WILDCAT ADVENTURES that’s both fun to read and nicely illustrated is “THE NAKED FEAR OF THE TATTOOED GEISHAS.” 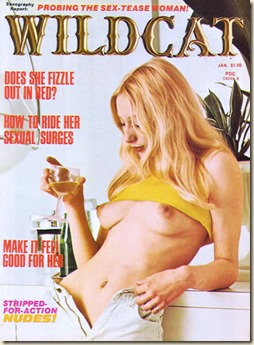 The illustration is a brown and black duotone. It shows naked geisha girls covered in beautiful Oriental tattoos giving a bath to a future victim.

In fact, if you look through all 29 issues of WILDCAT ADVENTURES published between June 1959 and August 1964, when it was a men’s pulp adventure magazine, you find that most of the artwork is cool but uncredited. Hence my love-hate relationship with that mag.

In that format it ditched painted covers for pinup photo covers and primarily featured low-budget, PLAYBOY-style photo spreads and sex-laden stories inside, with almost no illustrations.

WILDCAT finally folded in January, 1976, with a cover that featured a slim blonde babe sipping wine, with bare breasts and unzipped pants.

It may have some collectible value as the last issue. And you can still find it and other issues of WILDCAT on eBay.

But in my opinion they’re nowhere near as collectible, or as cool, as issues of their precursor, WILDCAT ADVENTURES.