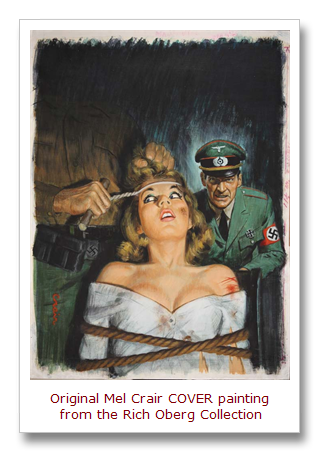 The most notorious and most sought after are the Nazi B&T covers — showing Nazis tormenting scantily-clad women or male POWs, often using fiendishly-creative forms of torture.

The evil bad guys (and sometimes evil women) on men’s adventure mag bondage and torture covers also include Commies, African natives, Indians, Satanists, psycho killers and motorcycle gang members. But evil Nazis are the most common and most “popular.” 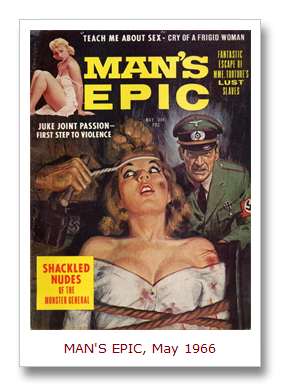 Many artists who created cover paintings and interior illustrations for the men’s adventure magazines did at least some sweat-style bondage and torture art. A few, like Norm Eastman, Norman Saunders and Basil Gogos did quite a lot of it.

A large percentage of the original men’s adventure magazine paintings that still exist are owned by Rich Oberg, the greatest collector of men’s adventure artwork in the world.

Examples from his collection are shown in the two must-have books about men’s adventure periodicals: It’s a Man’s World and Men’s Adventure Magazines in Postwar America.

But those books only show a small sampling of the pulp art treasures preserved in Rich Oberg’s huge collection. And, only some of those are sweat-style bondage and torture paintings.

So, in a recent conversation I had with Rich, we decided to do a series of posts on this blog that show more of the wild B&T artwork he has in his collection, along with the covers they were used for.

Many of the original paintings we’ll be showing you in these posts have only been seen by the artists and the handful of magazine editors and collectors through whose hands they passed.

As noted in the best online bio of Crair, on David Saunders’ great Pulp Artists site, he started out doing magazine covers for some of the last of the all-fiction pulp magazines, especially Western pulps. He also painted paperback covers, movie posters and illustrations for mainstream magazines. But Crair is probably best known for the hundreds of terrific men’s adventure cover and interior paintings he created from the late 1950s to the mid-1970s.

The original Crair painting shown at the top of this post was used on the cover of the May 1966 issue of Man’s Epic. It’s for the titillating story “SHACKLED NUDES OF THE MONSTER GENERAL.”

The male model Crair used for the monstrous, leering Nazi officer shown in that cover is Steve Holland. 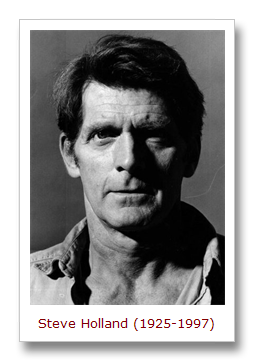 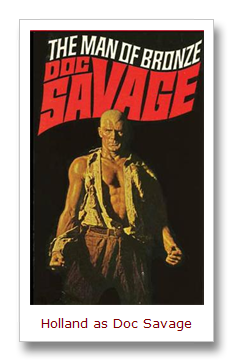 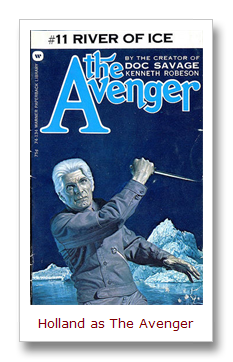 If you’re a fan of vintage paperbacks and men’s pulp mags, Holland should look familiar to you. He was highly popular as a male model in the 1950s, 1960s and 1970s.

He’s best known as the model used for Doc Savage on the covers of the Bantam reprint series, most of which were painted by artist James Bama (who also did many covers and interior illos for men’s adventure magazines). You’ll also see Holland’s manly image the covers of other paperbacks, including reprints of Kenneth Robeson’s other series, The Avenger, Mack Bolan’s Executioner series (featuring covers painted by men’s adventure artist Gil Cohen) and many Westerns.

Below are some more examples of Mel Crair’s Nazi “sweat mag” covers from the Rich Oberg Collection, along with the covers they were used on.

Crair’s painting for the August 1966 issue of Man’s Book goes with the story inside “TORTURE SECRETS OF HITLER’S MAD DOCTOR OF AGONY.” 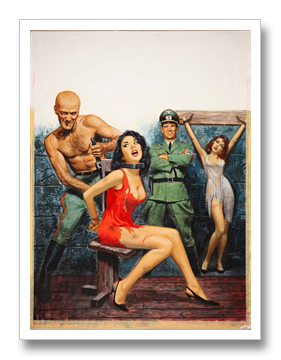 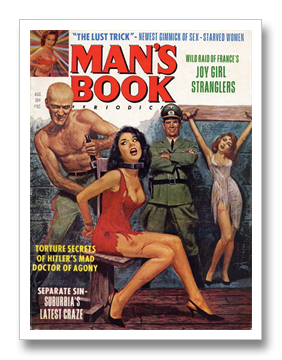 The Crair painting for the cover of the March 1969 issue of Men Today is for the “Great Escape” style story “BRING OUT THE HOSTAGES OF HITLER’S DEATH TRAP.” The babe with the great cleavage on that classic “Good Girl Art” cover is helping to rescue some American POWs from a German stalag. 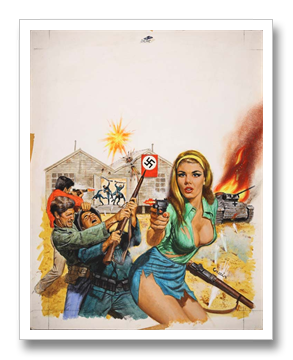 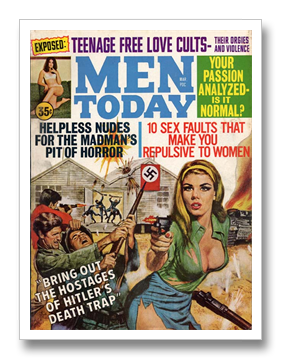 The poor girl on the cover of the March 1971 issue of Men Today is the one who needs rescuing. She’s being subjected to the “STRANGE RITES OF HITLER’S MAD FLESH STRIPPER.” 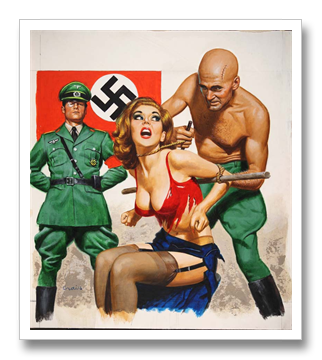 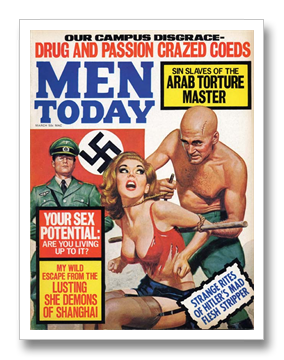 There are two unfortunate Nazi victims on the cover of the August 1967 issue of New Man magazine. They are unfortunate residents of “HITLER’S HIDEOUS HAREM OF AGONY.” And, yes, Steve Holland appears to have been the model for the both of the evil Nazi troopers in that scene. 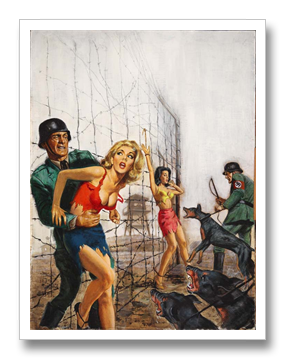 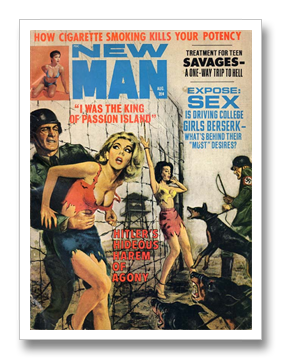 In the next post, I’ll show some rarely-seen B&T paintings by artist John Duillo from the Rich Oberg Collection.