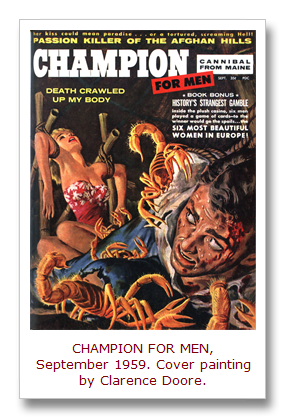 Many kinds of “killer creatures” were featured on the covers of men’s adventure magazines in the 1950s and 1960s: big animals, small animals, fish, birds, crabs and various creepy crawlies, including leeches, spiders and — one of my personal favorites — scorpions.

The most notable men’s adventure magazine cover that features scorpions is the September 1959 issue of Champion for Men. It depicts a scene that manages to combine evil-looking scorpions with classic pulp-style bondage and torture.

Champion for Men was one of the wild men’s pulp mags published by Stanley Publications, a company owned by the pioneering comic book publisher Stanley Morse. (It was, unfortunately, a short-lived magazine, lasting only from April 1959 to January 1960.)

The cover painting on the September ‘59 issue was done by the great pulp artist Clarence Doore, for the story “DEATH CRAWLED UP MY BODY.”

It’s Rich’s amazing collection that is featured in the Taschen book Men’s Adventure Magazines, one of the books I consider a must-have for fans of vintage men’s mags.

Doore’s scorpion painting was used for the cover of the first edition of that book, published in 2004.

As you may know if you’re a regular reader of this blog, it was Wil Hulsey, a.k.a. Will or William Hulsey, who created the most famous killer creature cover painting of them all — the “Weasels Ripped My Flesh” painting used for the September 1956 issue of Man’s Life.

I own both the 2004 and 2008 editions of the Taschen book. But I prefer the now out-of-print first edition with the scorpion cover. (You can still find good quality used copies on AbeBooks.com.) 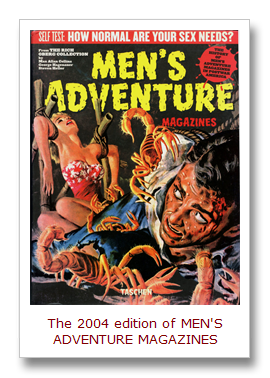 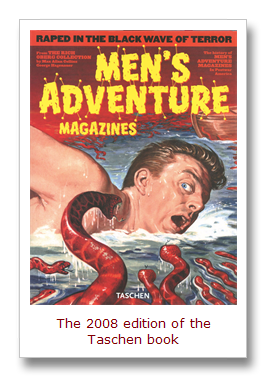 That interior illo was painted by Syd Shores (a.k.a. Sydney, Sidney or Sid Shores). Shores provided artwork to many vintage men’s adventure magazines. But he is probably better known for the cover and interior art he did for Golden Age and Silver Age comic books, including Captain America, The Human Torch, The Sub-Mariner and many others. 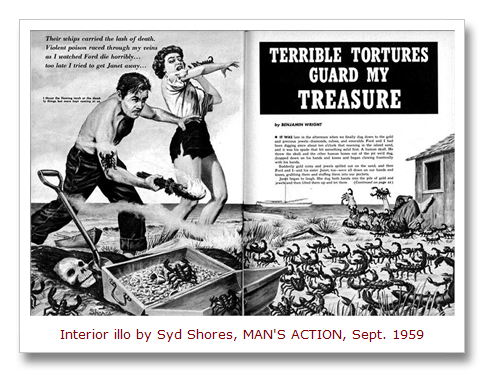 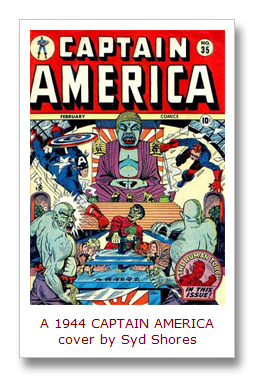 The Man’s Action scorpion story also has a classic pulpy blurb written by the editor. It says:

Their whips carried the lash of death.
Violent poison raced through my veins
as I watched Ford die horribly…
too late I tried to get Janet away…

In the November 1955 issue of Man’s Life, there’s another killer scorpion story. 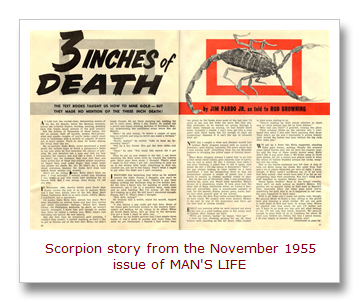 That one has a cool title — “3 INCHES OF DEATH” — but is only illustrated with a stock photo of a scorpion. (Too bad, since a pulp artist like Shores, Hulsey or Doore could have done a great painted illustration for a story with that title.)

Man’s Life was another men’s pulp mag that Stanley Morse had a hand in, at least for part of it’s long run. It was initially published by Crestwood Publishing from 1952 to 1965, then by Morse’s Stanley Publications until 1974.

By the way, the lethality of scorpions is highly embellished.

There are more than 1,700 species of scorpions in the world and only about 25 of those species have venom capable of killing a human being. 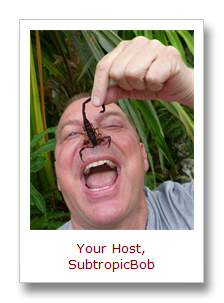 Of course, most scorpions can inflict a painful sting with the sharp little “telson” on their tails. And they all look creepy.

In the Florida Keys, where I live, a species called the “bark scorpion” (Centruroides gracilis) is common. I see bark scorpions fairly often in our garden.

They are non-lethal, mostly nocturnal — and quite tasty.

No scorpions were harmed in the research I did for this post.