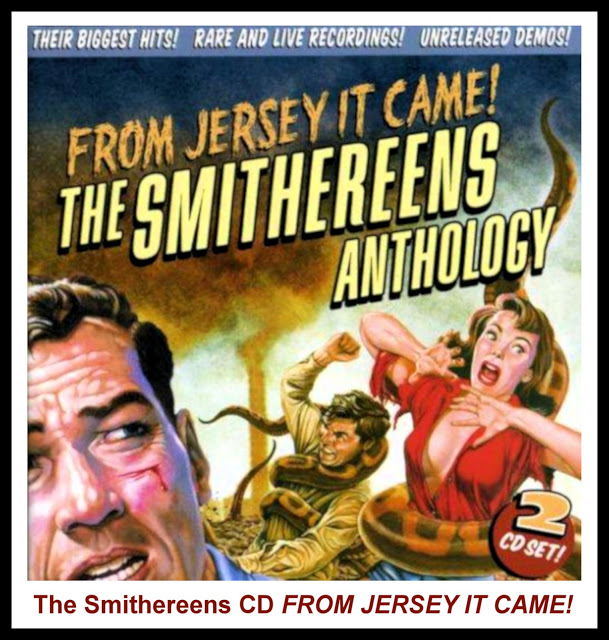 One of my favorite examples was posted a while back by Timothy Isaacson, a group member in Illinois who has diverse tastes in art and music.

His post showed the cover of the career-spanning, 2-disc compilation CD set by The Smithereens titled FROM JERSEY IT CAME! THE SMITHEREENS ANTHOLOGY.

The Smithereens are best known for their songs “Blood and Roses,” “Only a Memory,” “A Girl Like You” and “Too Much Passion.”

I remember seeing the band’s video for “Blood and Roses” when it was shown on MTV in 1986 (back when MTV was still good).

The song was also featured in the 1987 MIAMI VICE episode “Duty and Honor” (Season 3, Episode 15, also known to fans as “The Savage” episode, after the name of the psycho killer in the story).

Another claim to fame chalked up by The Smithereens’ is being featured in the gonzo Troma Films flick CLASS OF NUKE ‘EM HIGH.

During the high school dance scene at about 20 minutes in, they play the song “Much Too Much,” from their BEAUTY & SADNESS album.

The cover art for the Smithereens’ CD set is a collage of images taken from three different classic MAM issues.

At bottom left is the face of a guy with a bloody cut on his cheek.

That image comes from the painting the great paperback and MAM artist Robert E. Schulz created for the cover of MALE, December 1954.

Schulz created hundreds of paperback covers and MAM cover and interior illustrations. Like many illustration artists, he also did some advertising artwork, most notably the image of the lumberjack used on the packaging for Brawny paper towels in 1978. (The red-hued package shown at left in the photo below.)

Schulz’s family created a Facebook page for him several years ago and one of the posts there has an interesting anecdote about the Brawny Man model. It says: “The model used was a gas station attendant from Stockholm, NJ. He was offered a big contract to appear in TV ads for a national advertisement campaign, but turned it down because he would not venture the 55 miles to NYC for any amount of money.”

The Bob Schulz cover painting for MALE, December 1954 that the Smithereens CD borrowed a piece of shows a guy running away from a tiger on a wooden bridge, as his buddy shoots at the big cat with a pistol. I suspect the cover art for that issue was picked because there’s a classic story about a killer tiger inside, though it doesn’t actually involve any adventurers on a bridge. 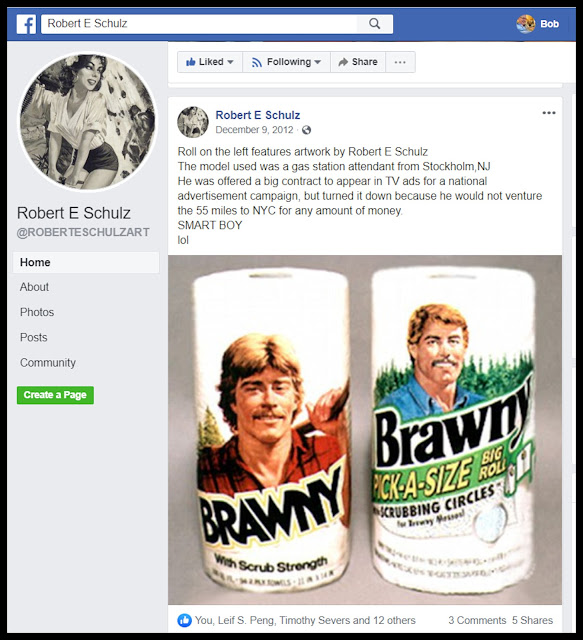 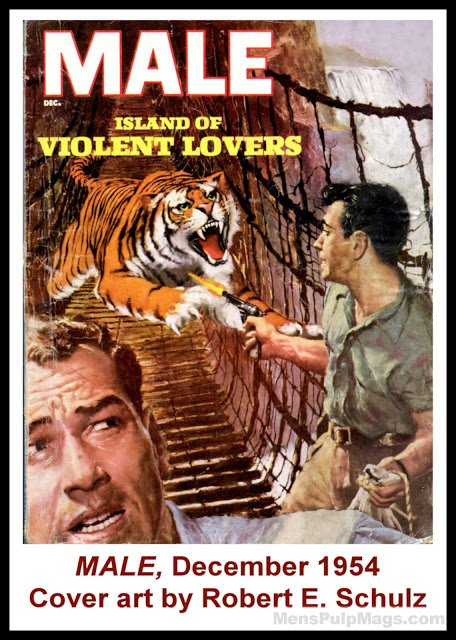 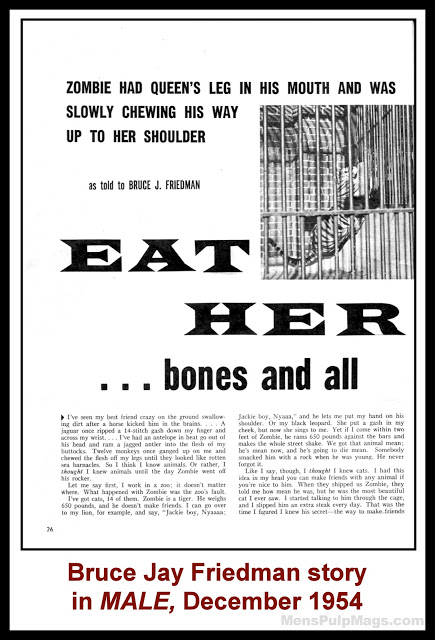 The story is memorably titled “EAT HER… Bones and All!” It was written by Bruce Jay Friedman, who worked as an editor for the Martin Goodman Magazine Management MAMs early in his career, before he became a world famous novelist, playwright and screenwriter.

It’s one of the stories included in WEASELS RIPPED MY FLESH!, the first story anthology in the Men’s Adventure Library book series I co-edit and publish with Wyatt Doyle via his New Texture imprint.

The image in the middle of the Smithereens CD cover — a guy doing battle with a giant snake — comes from the cover of the January 1958 issue of the men’s adventure mag TRUE WAR. That cover painting was done by artist Mal Singer.

The screaming woman in the image at right on the CD cover comes from the cover of MAN’S LIFE, November 1957.

That cover painting goes with the story “SPIDER MONKEYS TORE ME APART!” It was done by the great Wilbur “Wil” Hulsey, who was — among other things — a grand master of illustrations for the type of “killer creature” yarns that were popular in vintage MAMs. (We focus on those in our MAM story and artwork anthology I WATCHED THEM EAT ME ALIVE.)

Wil Hulsey did many of the classic animal attack covers for MAN’S LIFE and TRUE MEN STORIES, including the iconic “Weasels Ripped My Flesh!” painting used for the cover of MAN’S LIFE, September 1956. (Naturally, we feature the “killer weasels” issue on the cover of our WEASELS RIPPED MY FLESH! anthology, which reprints that classic story. As you may know Frank Zappa borrowed that story title as the title of a 1970 album by his band, The Mothers of Invention. In case you missed it, the story behind that album cover is in a previous post I wrote at this link.) 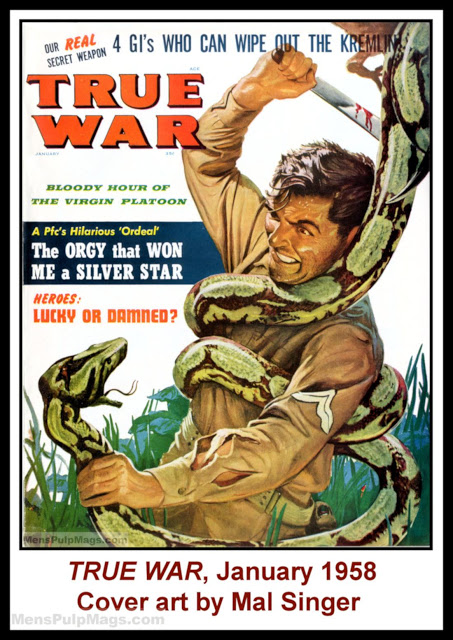 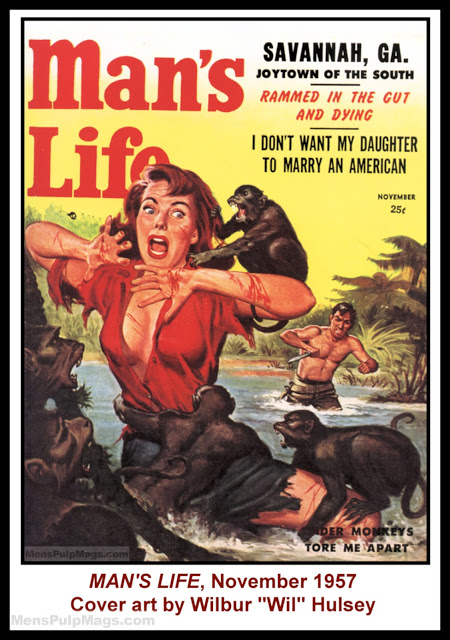 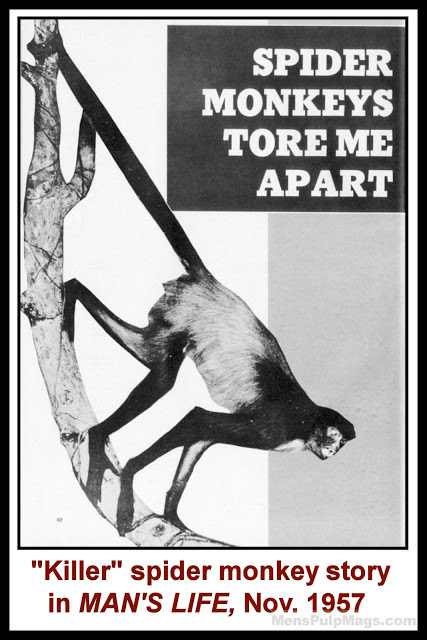 On the cover of MAN’S LIFE, November 1957, the screaming woman is beset by, er, ferocious killer spider monkeys. On the Smithereens cover, the layout designer Photoshopped a python onto her body.

Another CD cover that uses an image from a men’s adventure mag is the cover of an album by a French rock band named Blow. That came about because the band’s drummer, Lionel Amerio, stumbled across my interview on this blog with great MAM artist Bruce Minney and a later guest post by Bruce’s son-in-law, Tom Ziegler, discussing his lushly-illustrated book about Bruce’s MAM and paperback cover artwork, BRUCE MINNEY: THE MAN WHO PAINTED EVERYTHING.

Lionel sent me an email saying his band wanted to use part of Bruce Minney’s cover art for MAN’S CONQUEST, August 1971 on the cover of the band’s CD STREETS OF RAGE. Much to his credit, he said they did not want to use the image without Bruce’s permission and wondered if I could put him in touch with Bruce.

I did, Bruce said “OK,” and the result is the cover of the CD shown here, which was a joint release with another French band named Drebean.

The CD cover has Minney’s image of a group of male and female bikers tormenting a young woman superimposed on a cartoon-like street scene representing “Rage Street.” 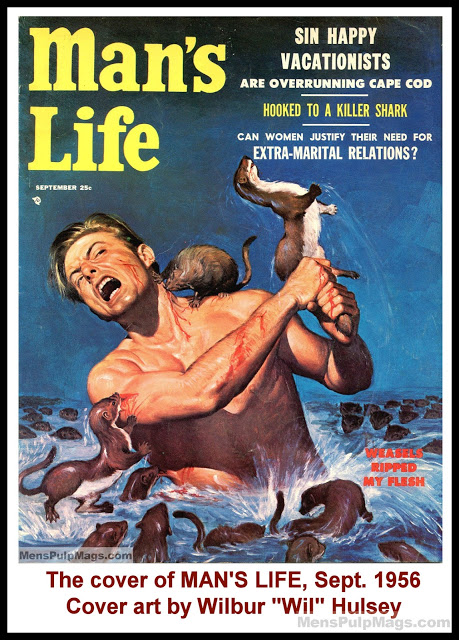 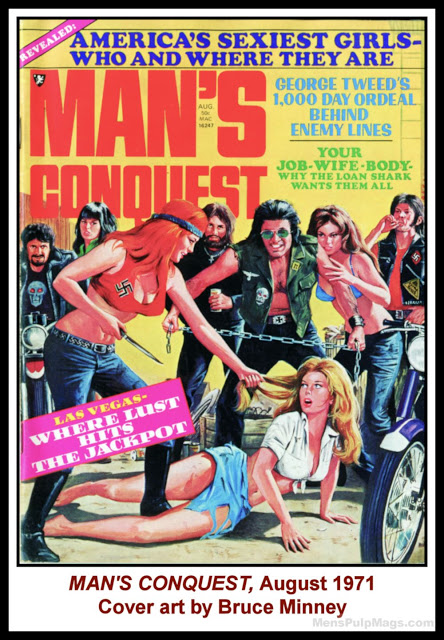 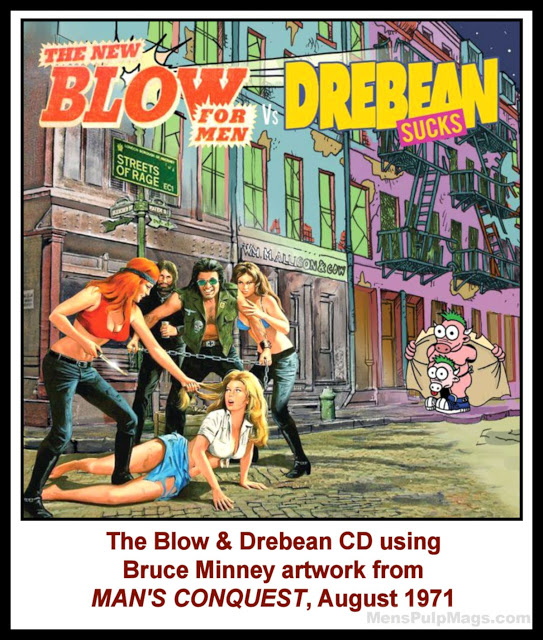 I suspect there are other album covers that lifted men’s adventure mag artwork. If you know of other examples, please email me or post them in the Men’s Adventure Magazines & Books Facebook group and I will update this post.

There are a couple of other interesting cases of MAM covers being used for rock music purposes I currently know of, but they are not album covers.

One is a photoshopped spoof on the LaughingSquid site. It repurposes Wil Hulsey’s weasels cover as if it were about the song “Heaven Knows I’m Miserable Now” by the English rock band The Smiths. The reimagined headlines superimposed on the spoof cover are a hoot.

I found some more like that in a post featuring “Classic Rock And New Wave Songs Brilliantly Reimagined,” on the oddly-named DesignYouTrust site. If you know the songs involved and read the headlines superimposed on the MAM covers, they’re pretty funny, too. 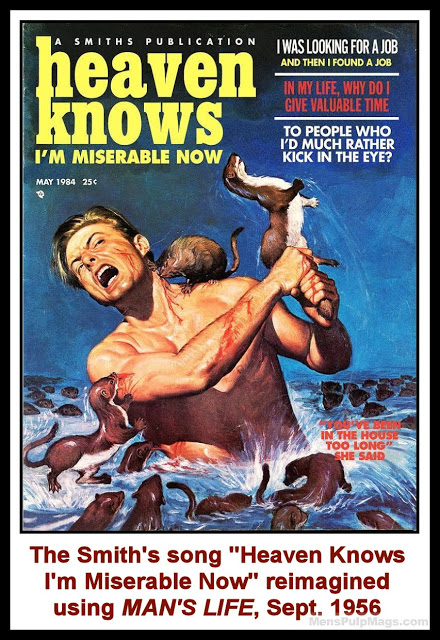 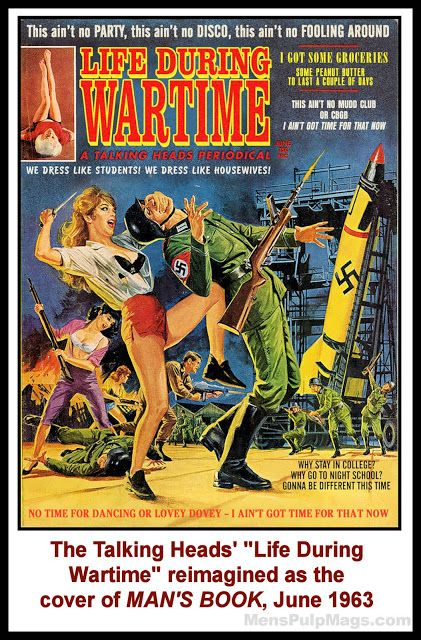 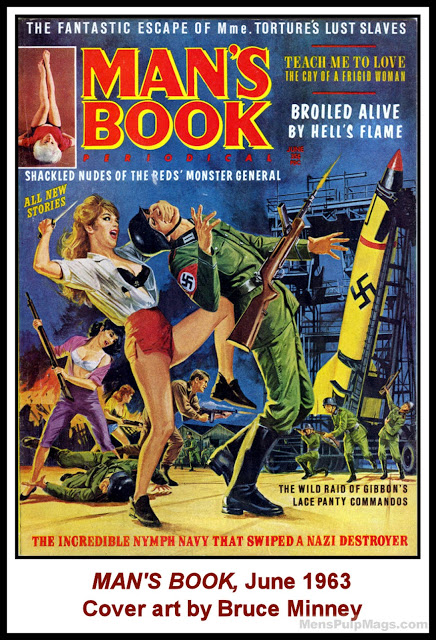 One is a version of the cover of MAN’S BOOK, June 1963, which has a cover painting by Bruce Minney depicting the legendary “Lace Panty Commandos.” It “reimagines” the 1979 Talking Heads song “Life During Wartime” as a men’s adventure magazine.

Another one on that site reimagines the classic Beatles song “Rocky Raccoon” as a MAM cover. It uses the cover of REAL MEN, June 1958, which features a Western cover by the prolific MAM, comics and paperback artist Vic Prezio.

By the way, the “Classic Rock And New Wave Songs Brilliantly Reimagined,” post also includes some cool paperback spoof covers, as well as the ad shown below, which will give my fellow Pink Floyd fans a chuckle. 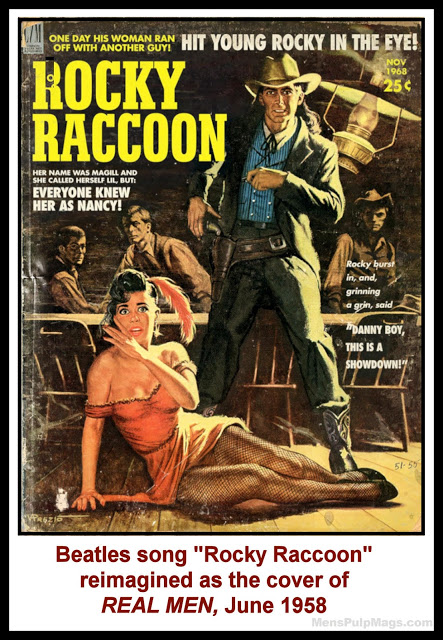 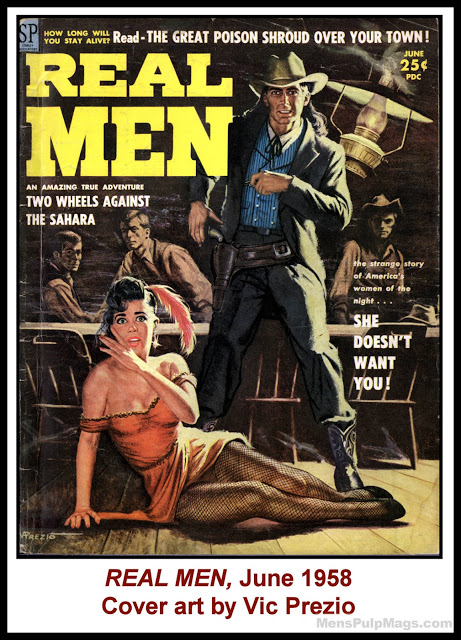 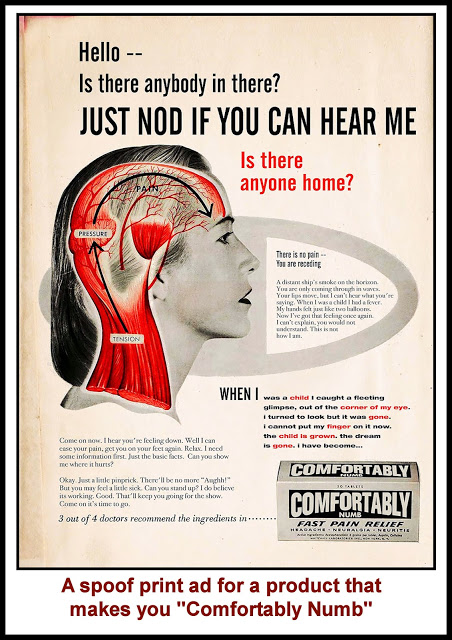 Below are the current books in our Men’s Adventure Library series. We’ll be announcing more soon…