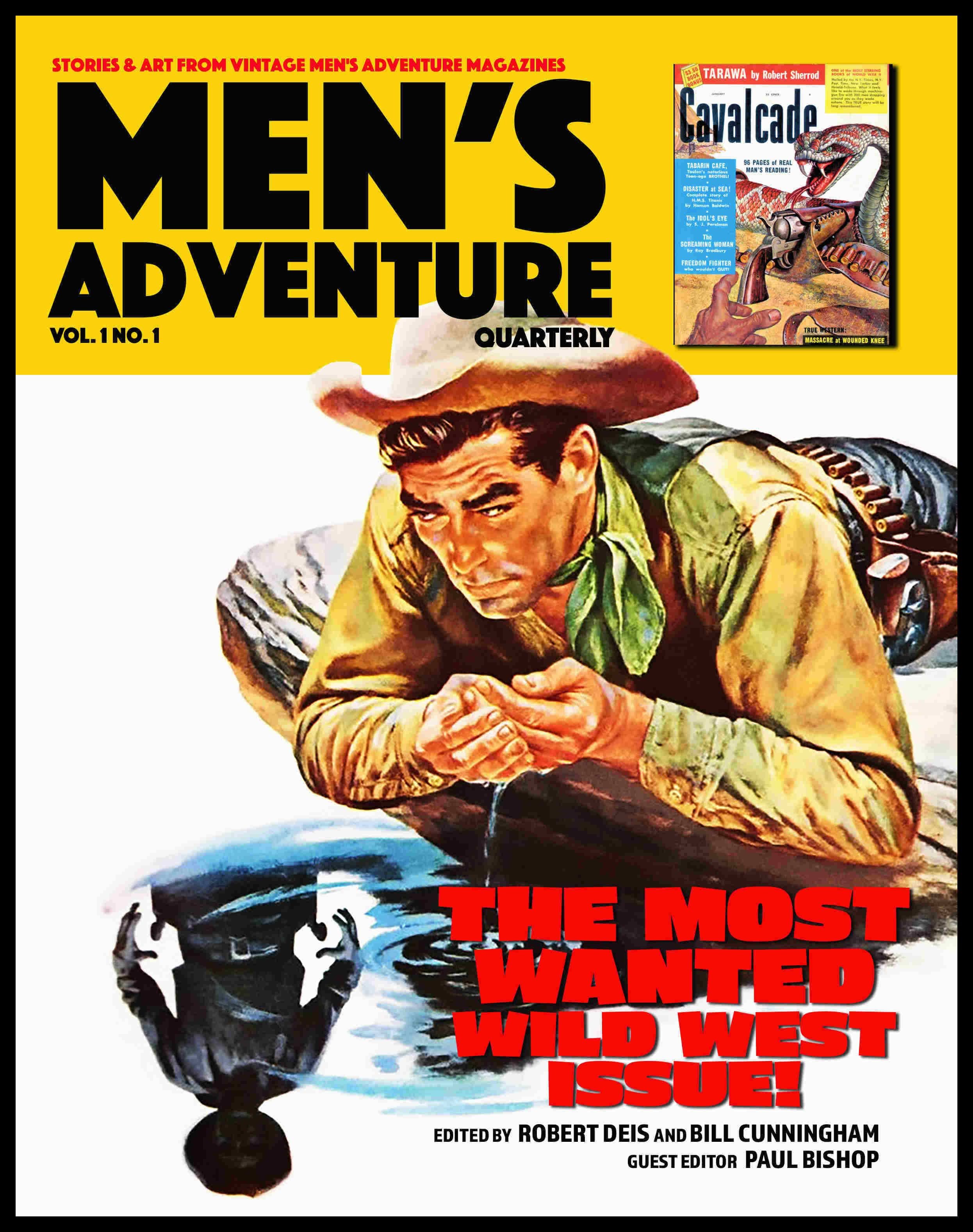 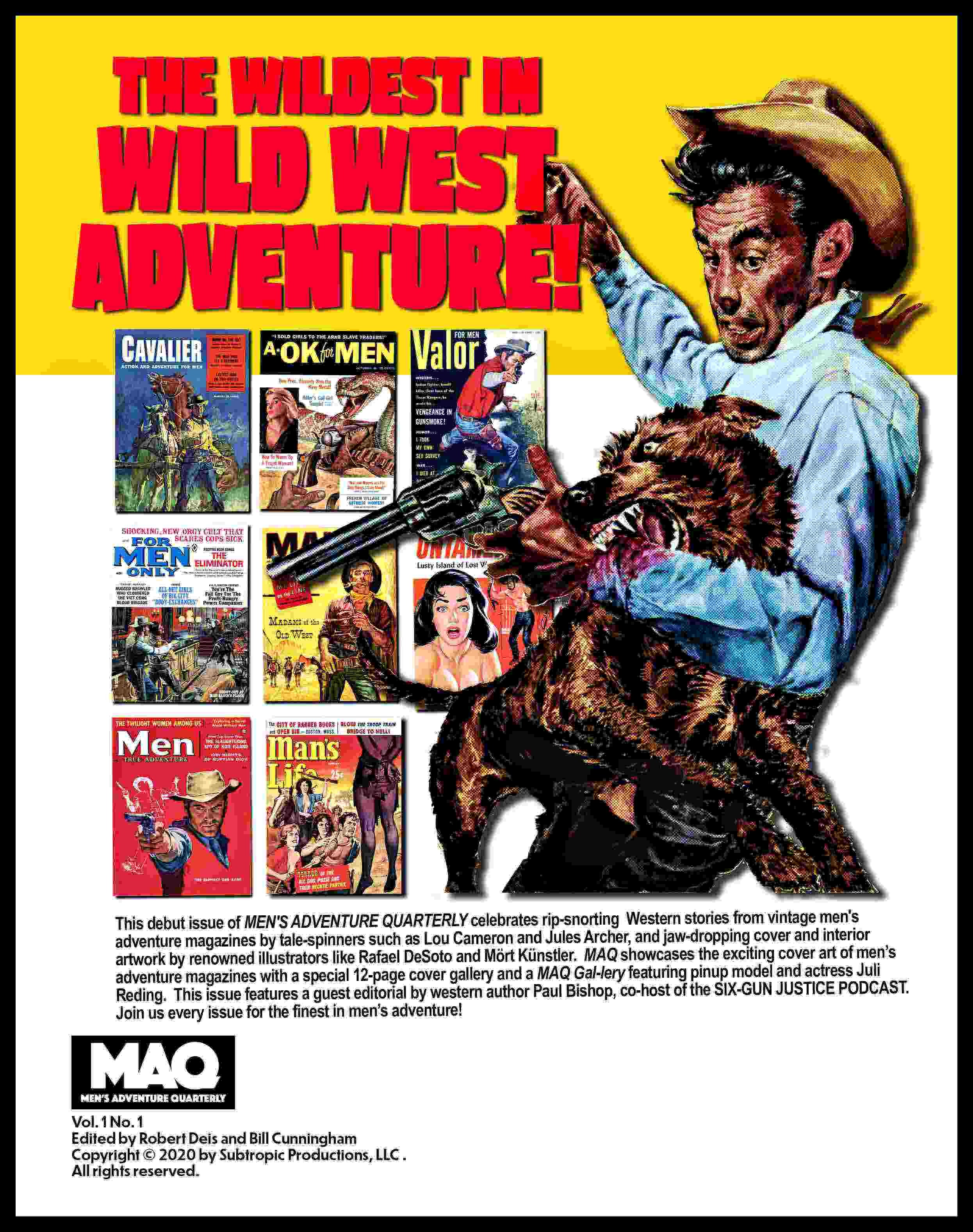 Recently, I joined forces with Bill Cunningham, head of Pulp 2.0 Press, to launch a new 155-page, full color, 8"x10" magazine that reprints stories and illustrations from men’s adventure magazines published in the ‘50s, ‘60s and ‘70s and provides background on the writers, artists and publishers who created them.

We dubbed it the MEN’S ADVENTURE QUARTERLY, reflecting our plan to publish 4 issues per year.

Each issue will focus on stories and artwork related to a particular topic. The first issue, Vol. 1, No.1, focuses on Western stories and artwork. Bill and I subtitled it “The Most Wanted Wild West Issue.” In this post, I’ll provide a preview of what you’ll find in it.

MAQ #1 was released in mid-January 2021. It’s available on Amazon in the US and worldwide (or directly from me via my eBay listings) and we’ve been very encouraged by the response.

Each shows the cover of the issue the story comes from and the interior illustrations or photos used for it, plus an introduction with background info on the magazine, writer or artist.

I’m especially happy to have included authorized reprints of Western stories by Lou Cameron, the prolific writer who essentially launched the “adult Western” paperback genre with his LONGARM and STRINGER series, and Donald Honig, one of the last surviving writers who was a regular writer for the great MAMs published by Martin Goodman’s Magazine company (ACTION FOR MEN, FOR MEN ONLY, MALE, MEN, STAG, etc.). 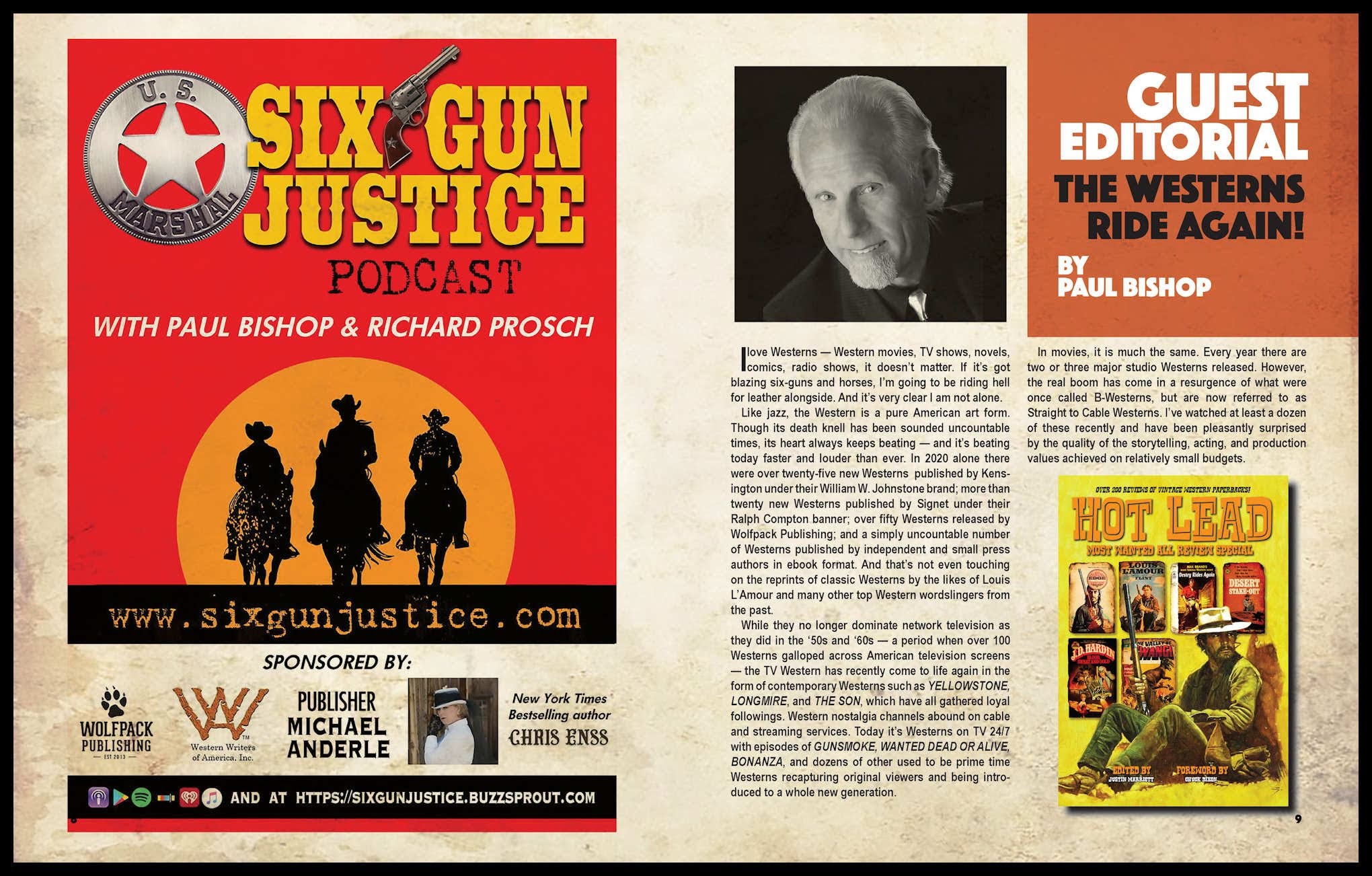 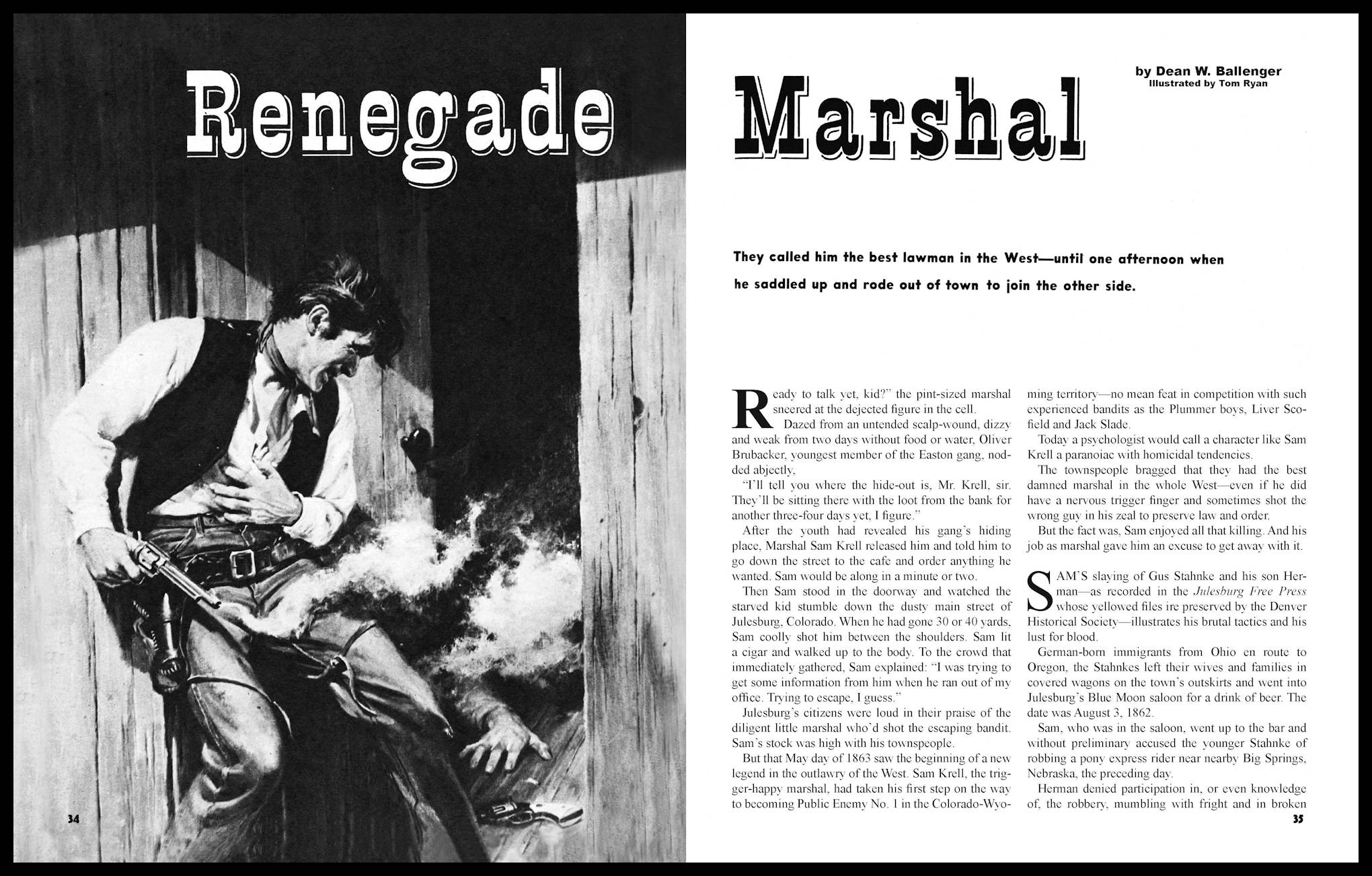 MAQ #1 also includes the first examples of what will be two recurring features in each issue.

One is the “MAQ Art Gallery,” showcasing MAM covers by some of the best artists who worked for the MAM genre. 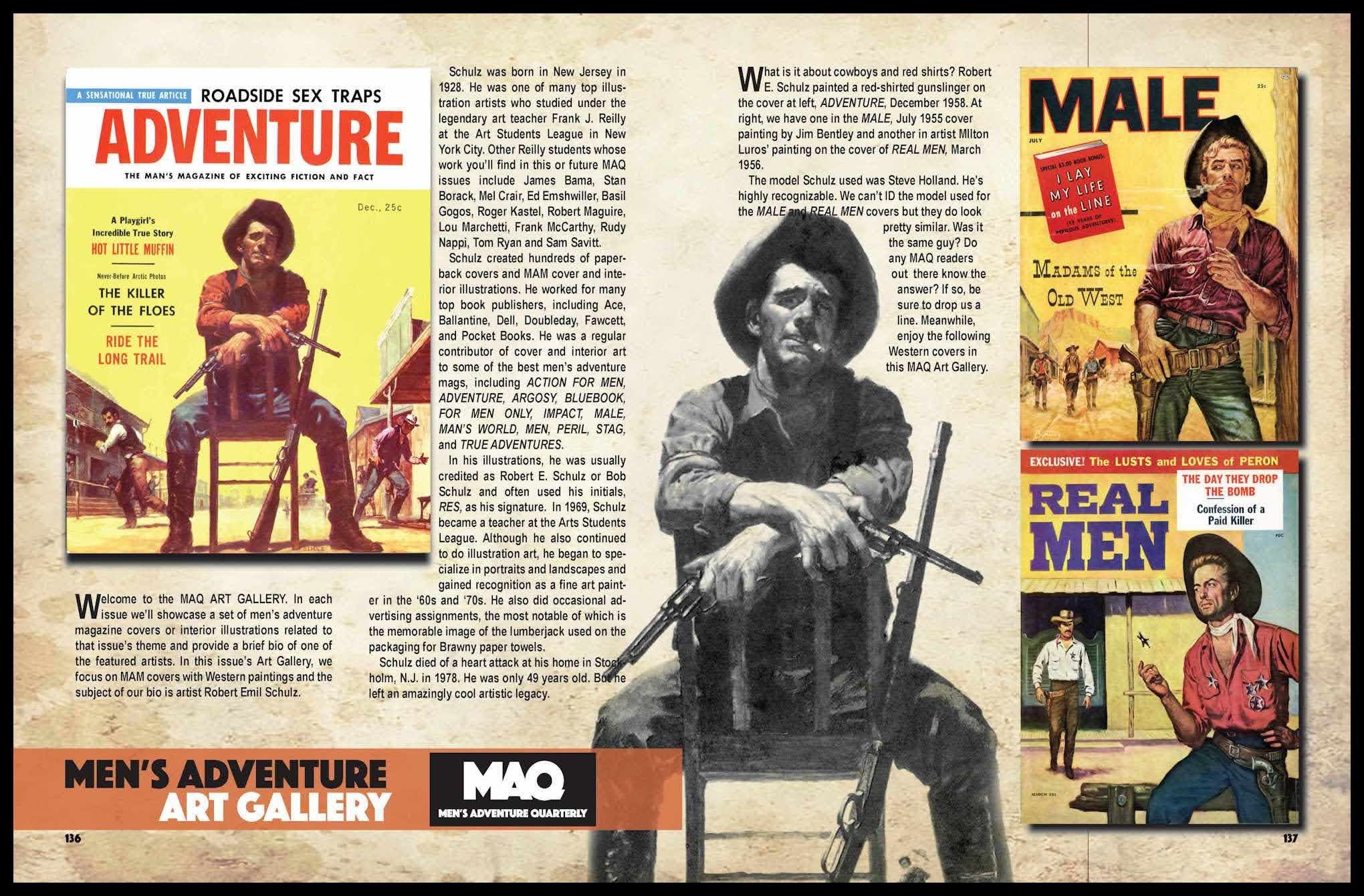 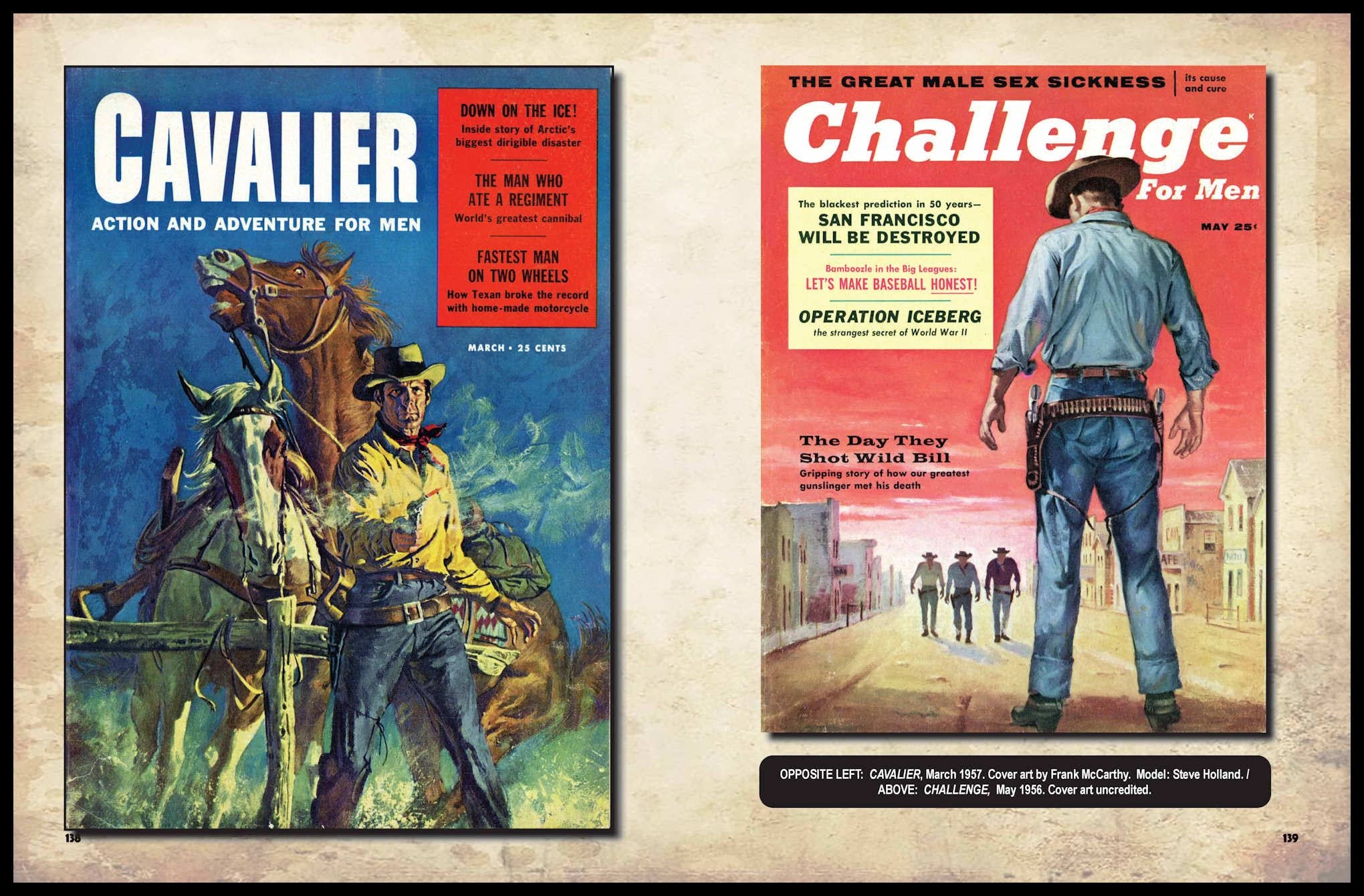 The cover and interior artwork shown with the stories are by other top artists, such as Mort Künstler (whose original MAM artwork is featured in MORT KUNSTLER: THE GODFATHER OF PULP FICTION ILLUSTRATORS, the art book I co-edited with Mort and Wyatt Doyle, and Samson Pollen (whose MAM art is featured in two other books I co-edited with Wyatt for our Men’s Adventure Library book series: POLLEN’S WOMEN: THE ART OF SAMSON POLLEN and POLLEN’S ACTION).

Another recurring feature will be what Bill cleverly named our “MAQ GAL-lery,” a special section showcasing pinup photos of some of the glamour girls who appeared in MAM photo spreads, along with biographical info about them. 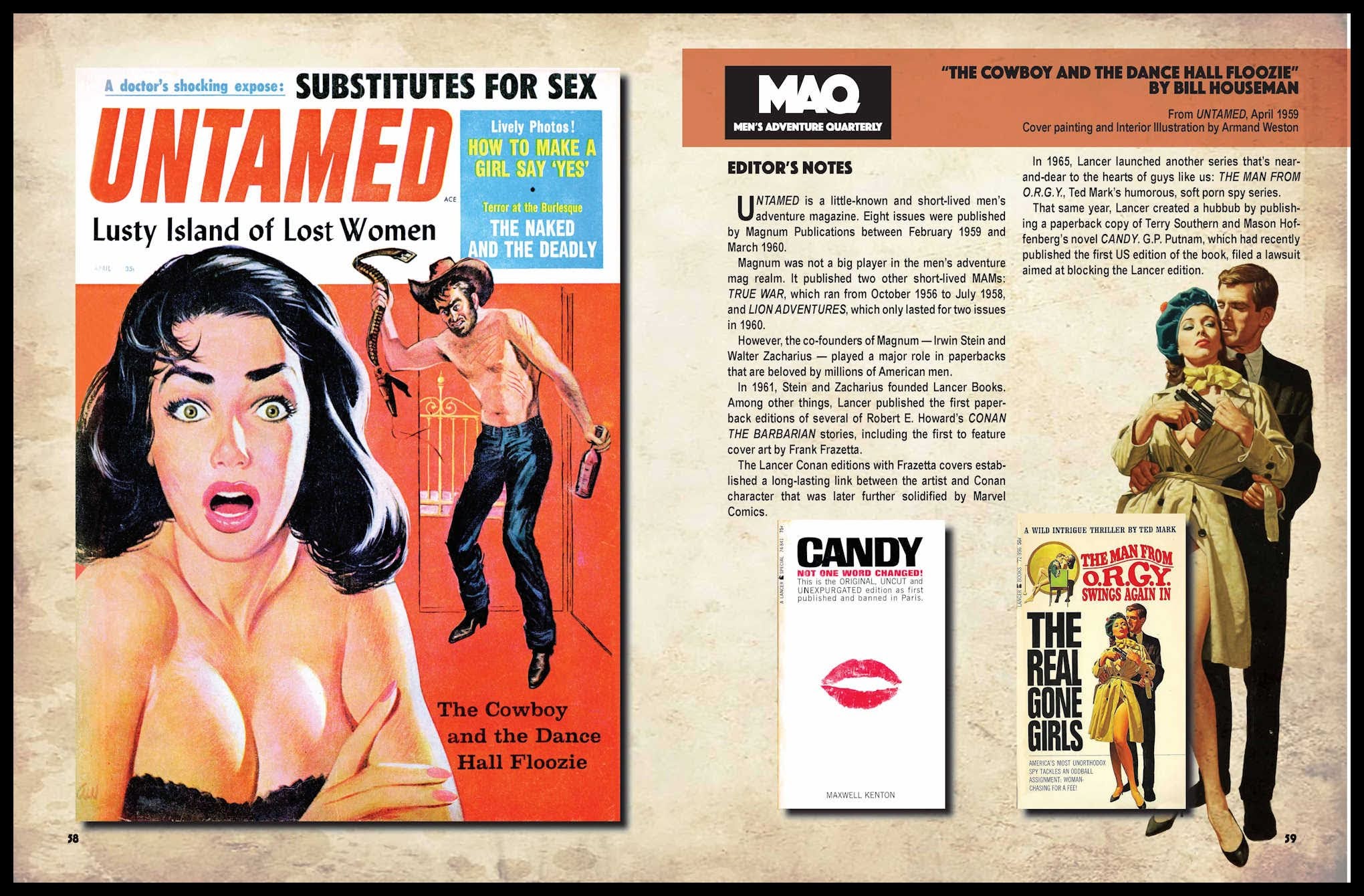 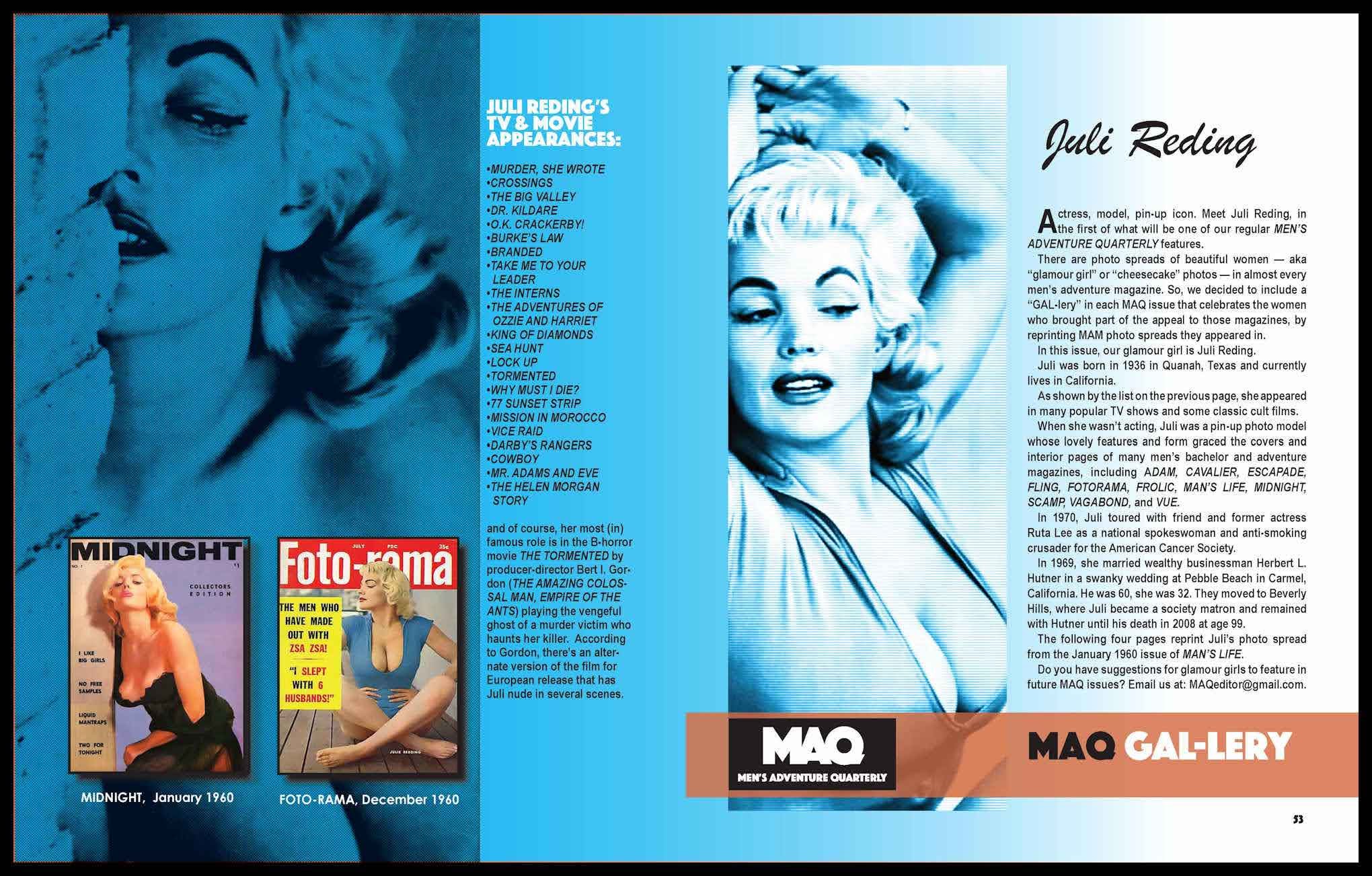 I want to send out a special thank the readers who posted positive reviews of the first MAQ issue on Amazon, Facebook, Goodreads, blogs, podcasts and elsewhere online or who sent us nice messages about it.

Many of those folks are writers that I’m a big fan of. Here’s a sampling of what they said, along with some more scans of pages from the issue.

“Loads of great text and LOTS of art including full color cover repros. If you love Westerns or those old ‘sweat’ magazines, this is a must-have!”
– Chuck Dixon
Legendary comics writer (THE PUNISHER, BATMAN, BANE, and many others) and novelist (including the popular BAD TIMES and LEVON CADE series)

“Brilliant Western stories and stunning art from the Men’s Adventure Magazines of the ‘50s thru the ‘70s.”
– Paul Bishop
Novelist (LIE CATCHERS, the FEY CROAKER series, and many others), Co-Editor editor of the 52 WESTERNS and FIGHT CARD series, and Co-Host of the SIX-GUN JUSTICE PODCAST

“All the stories are well-written and entertaining…and it features dozens of magazine covers and interior illustrations by some of the top artists of the mid-Twentieth Century era.”
– James Reasoner
Award-winning author of more 350 Western (including the WIND RIVER and RATTLER’S LAW Western series and the CIVIL WAR BATTLE series) and founder of Rough Edges Press 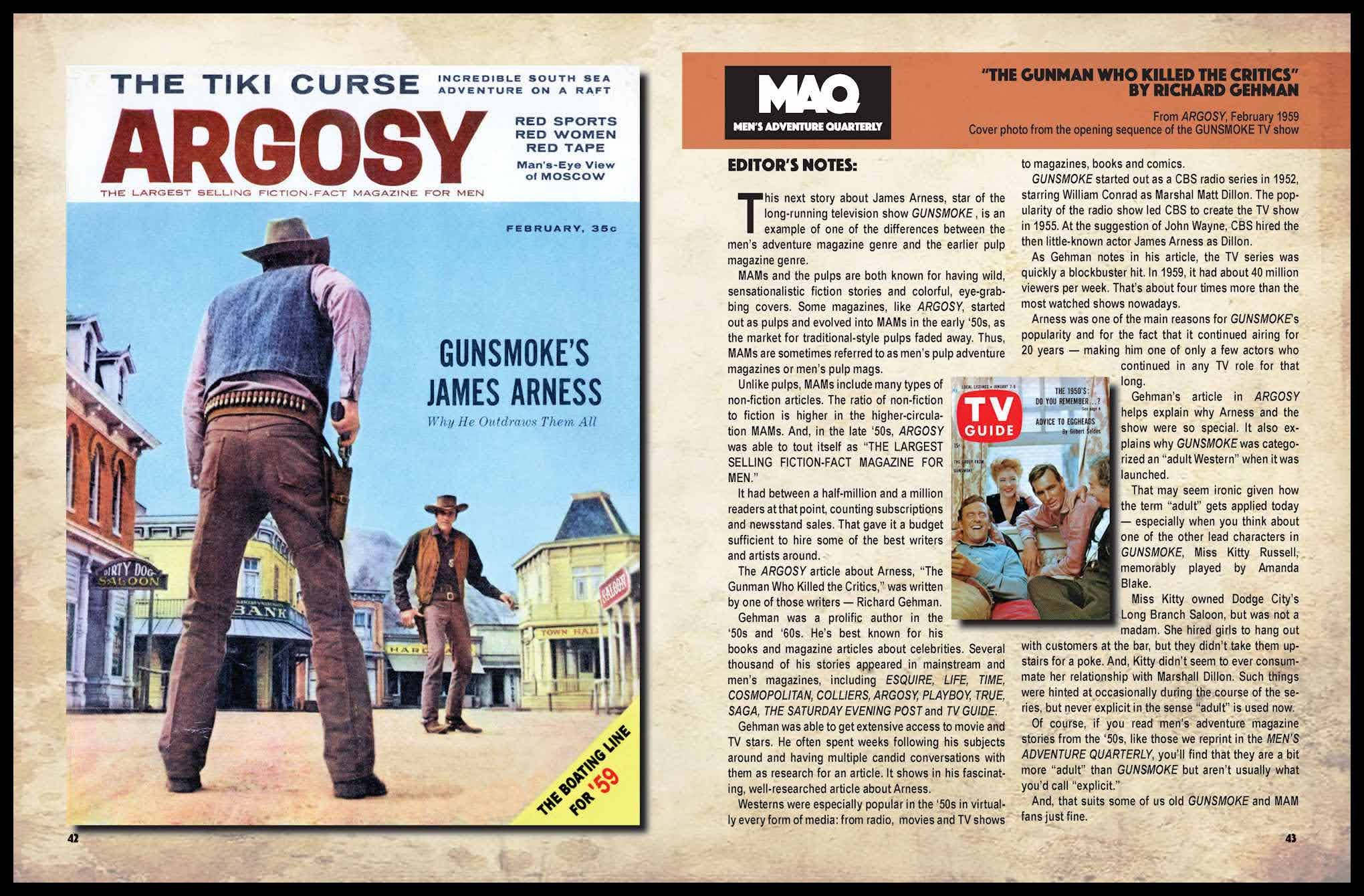 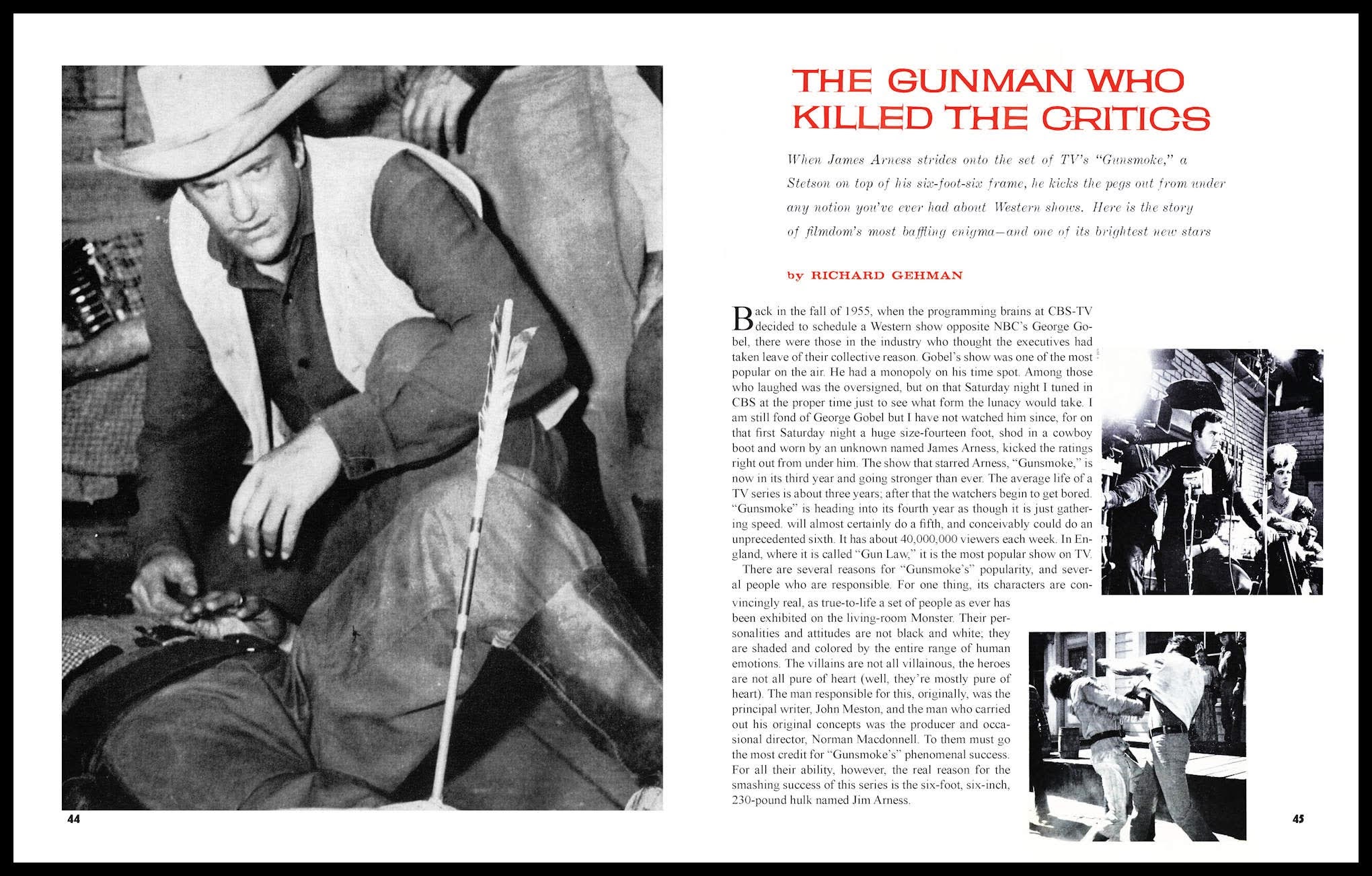 “From the reproductions of glorious covers and interior illustrations to the reprinting of both factual articles and action packed fiction, this collection is rollicking trip back in time.”
– Ron Fortier
Acclaimed comics writer, novelist (the CAPTAIN HAZZARD and BROTHER BONES series and more), editor of many “New Pulp” books and anthologies and founder of the Airship 27 publishing company

“This is a winner for anyone interested in vintage top notch men’s adventure fiction and the illustrations that accompanied them.”
– Michael Stradford
Video producer and author of MILESSTYLE, BLACK TO THE MOVIES, and the forthcoming book STEVE HOLLAND: THE WORLD’S GREATEST ILLUSTRATION ART MODEL

“Wow there is a lot of content here…It is absolute quality from cover to cover.”
– Justin Marriott
Editor of popular fanzines about vintage paperbacks, including PAPERBACK FANATIC, MEN OF VIOLENCE, THE SLEAZY READER, HOT LEAD, and more

“This is THE most impressive magazine of its sort I have ever seen.”
– Morgan Holmes
Vintage paperback historian, reviewer and blogger for Castalia House publishing company 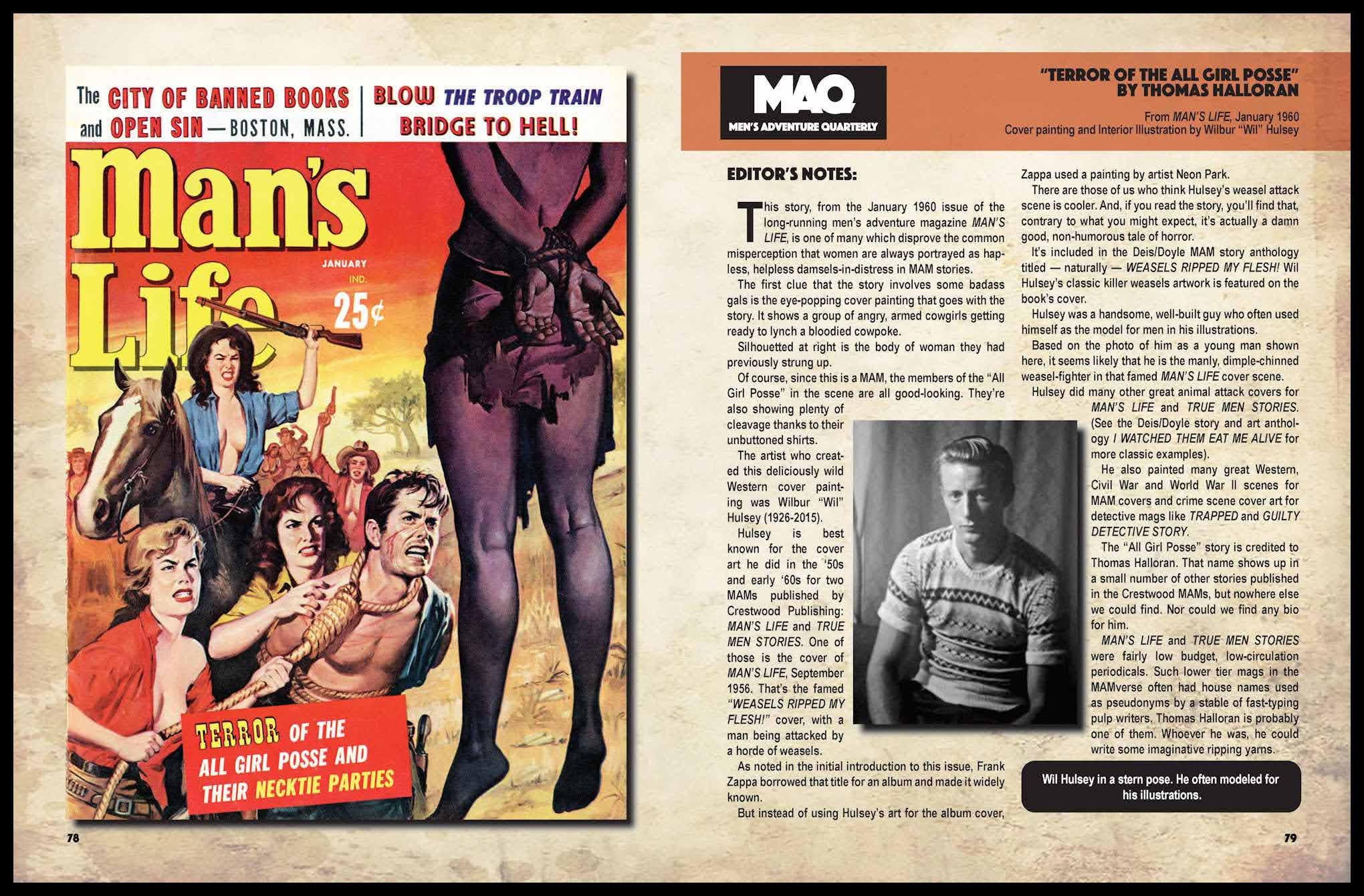 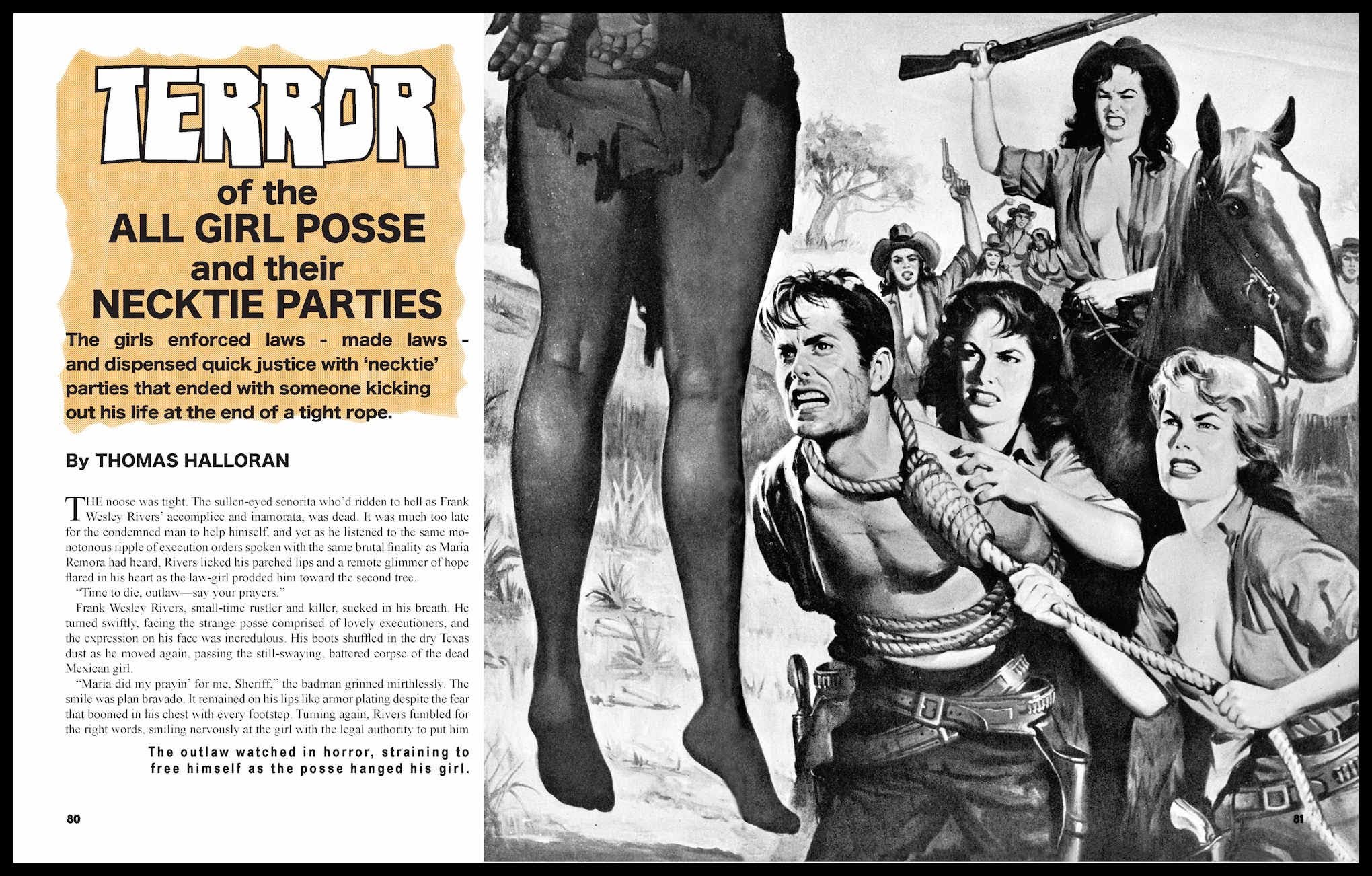 “Lots of gunplay and vengeance, lots of dance-hall floozies, and really fantastic art…The book is worth the price for the art alone.”
– Dan Leo
Author of the trippy “Arnold Schnabel” novel series (RAILROAD TRAIN TO HEAVEN, THIS WORLD OR ANY OTHER, etc.) and several entertaining blogs

“An excellent first issue and I’m looking forward to the next one already…Over 150 pages of fiction and artwork. Highly recommended!”
– Walker Martin
Renowned pulp art and pulp magazine expert and collector, and regular contributor to the popular pulp newsgroups and sites like ThePulp.net and MysteryFile.com

My MAQ Co-Editor, Bill Cunningham, and I were also honored by the interview Justin Marriott did with us for MEN OF VIOLENCE  Issue #12, by the cool video review paperback maven Jules Burt posted on his YouTube channel, by having Paul Bishop do an audio interview with us for the SIX-GUN JUSTICE podcast, and by the glowing post about MAQ#1 on the increasingly popular AmericanPulps.com website. 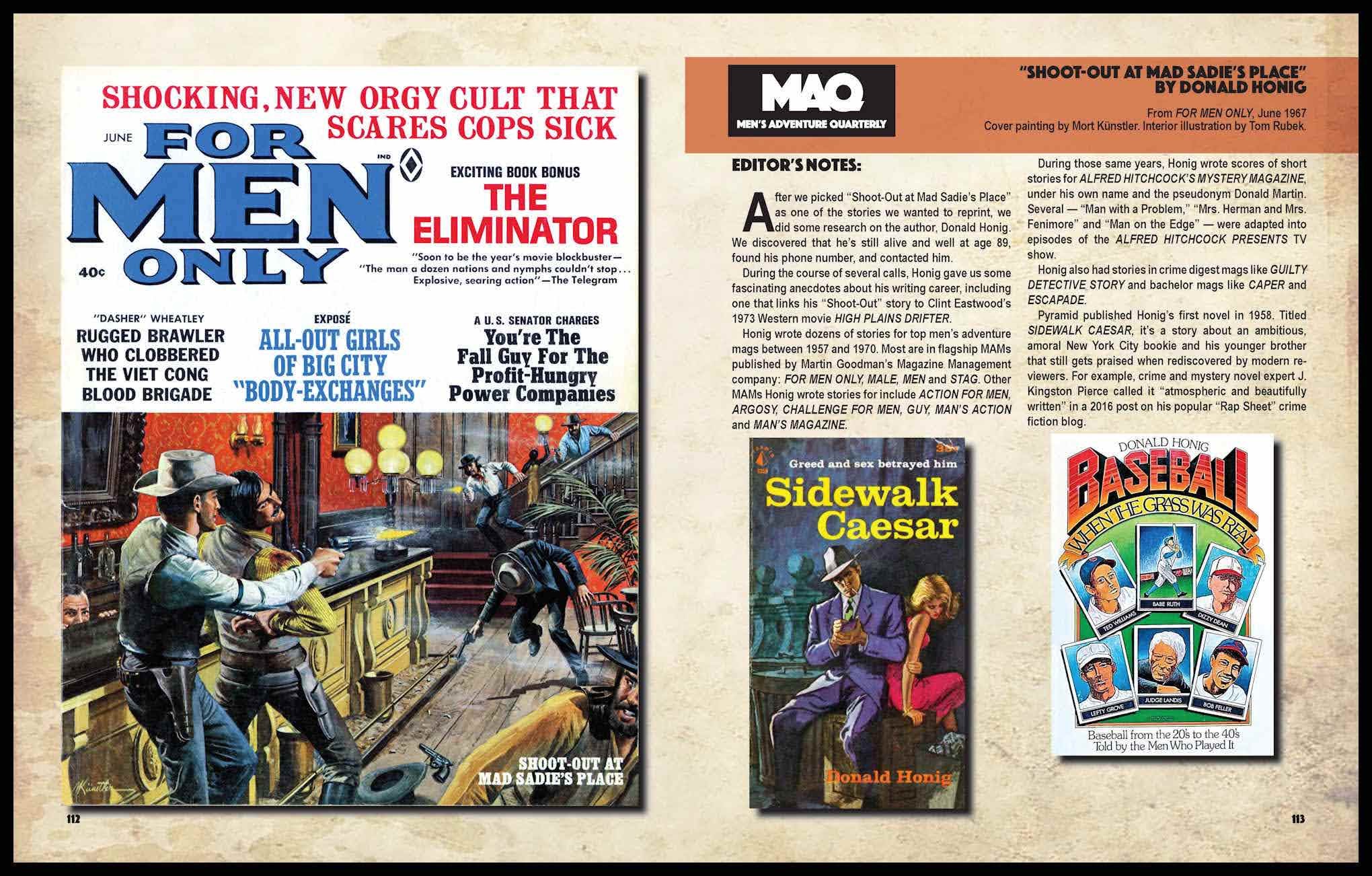 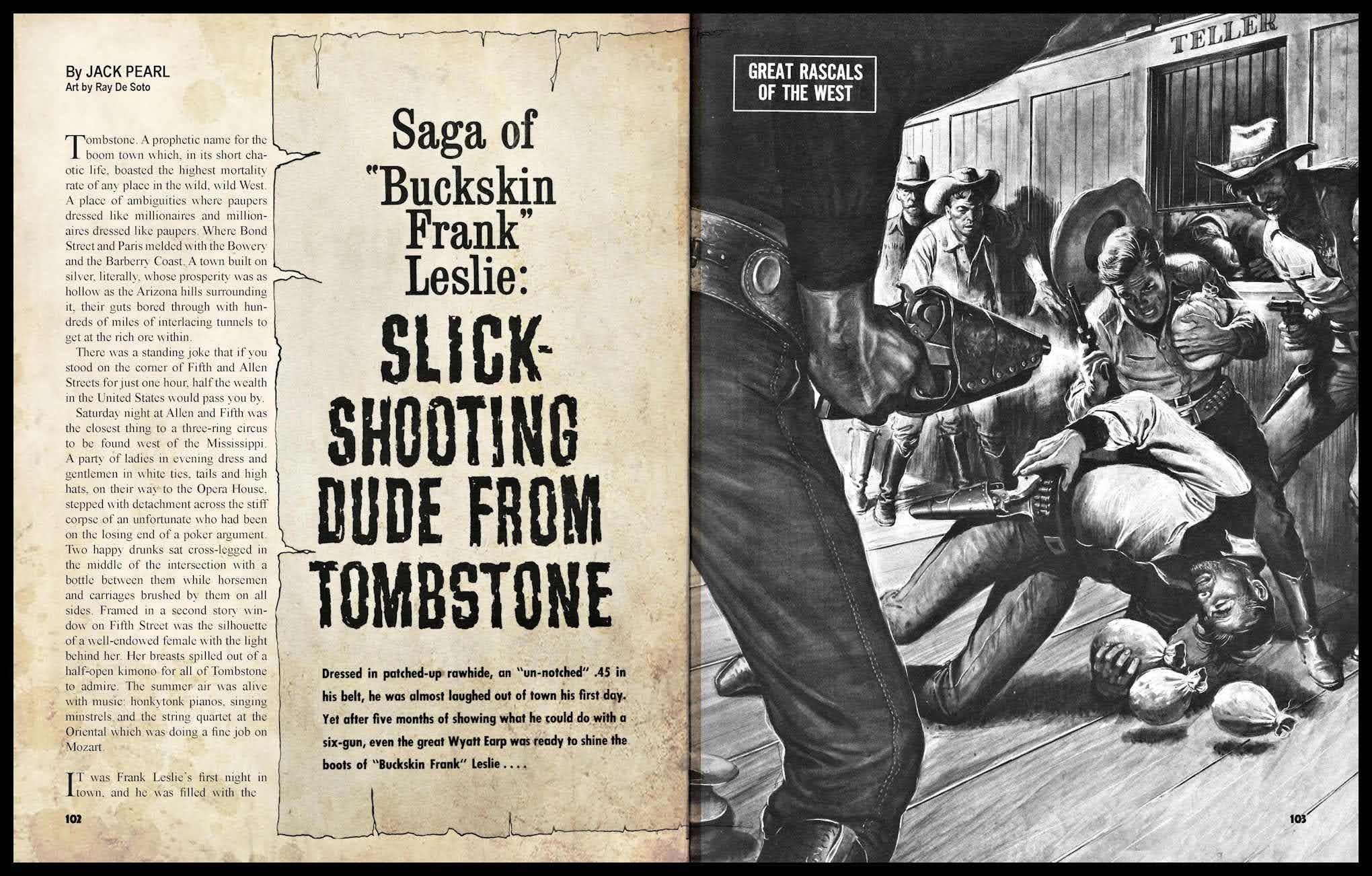 One of the cherries on top was getting praise from Tom Simon and Christopher Eric Compton, Co-Hosts of the great Paperback Warrior podcast and blog.

If you’re a fan of vintage action, adventure, crime, mystery or Western paperbacks you’re probably already a Paperback Warrior fan. If not, head to PaperbackWarrior.com and find out why it’s so popular.

We picked Westerns as the theme of this inaugural issue partly because of the recent upsurge of interest in that genre. We’d noticed an increase in reprints of old Western novels and the publication of many new ones by indie publishers we admire, like Wolfpack Publishing, Airship 27, Bold Venture and Piccadilly Press.

We’d also become big fans of the SIX-GUN JUSTICE PODCAST, a podcast about Western novels, TV shows and movies that became hugely popular soon after it was launched in 2020 by Paul Bishop and novelist Richard Prosch.

We were both extremely happy that Paul agreed to write a Guest Editorial for the first issue of the MAQ. I love the Western stories and artwork we included in it. And, I love the amazing layout Bill Cunningham created.

If you don’t have a copy, you can get on Amazon in the US and worldwide, with free shipping if you’re an Amazon Prime member.

We’ll be releasing the MEN’S ADVENTURE QUARTERLY #2 in April 2021. 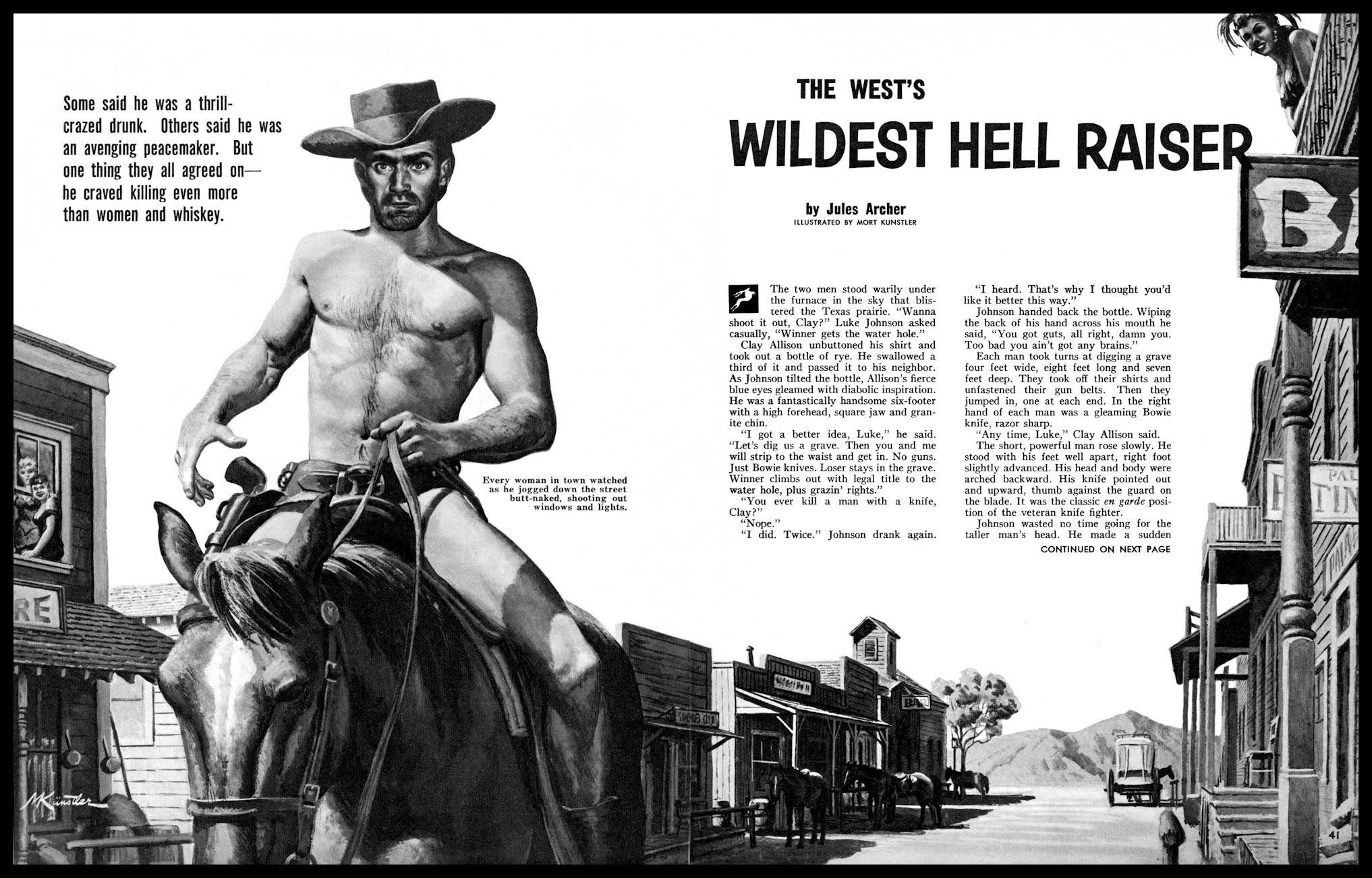 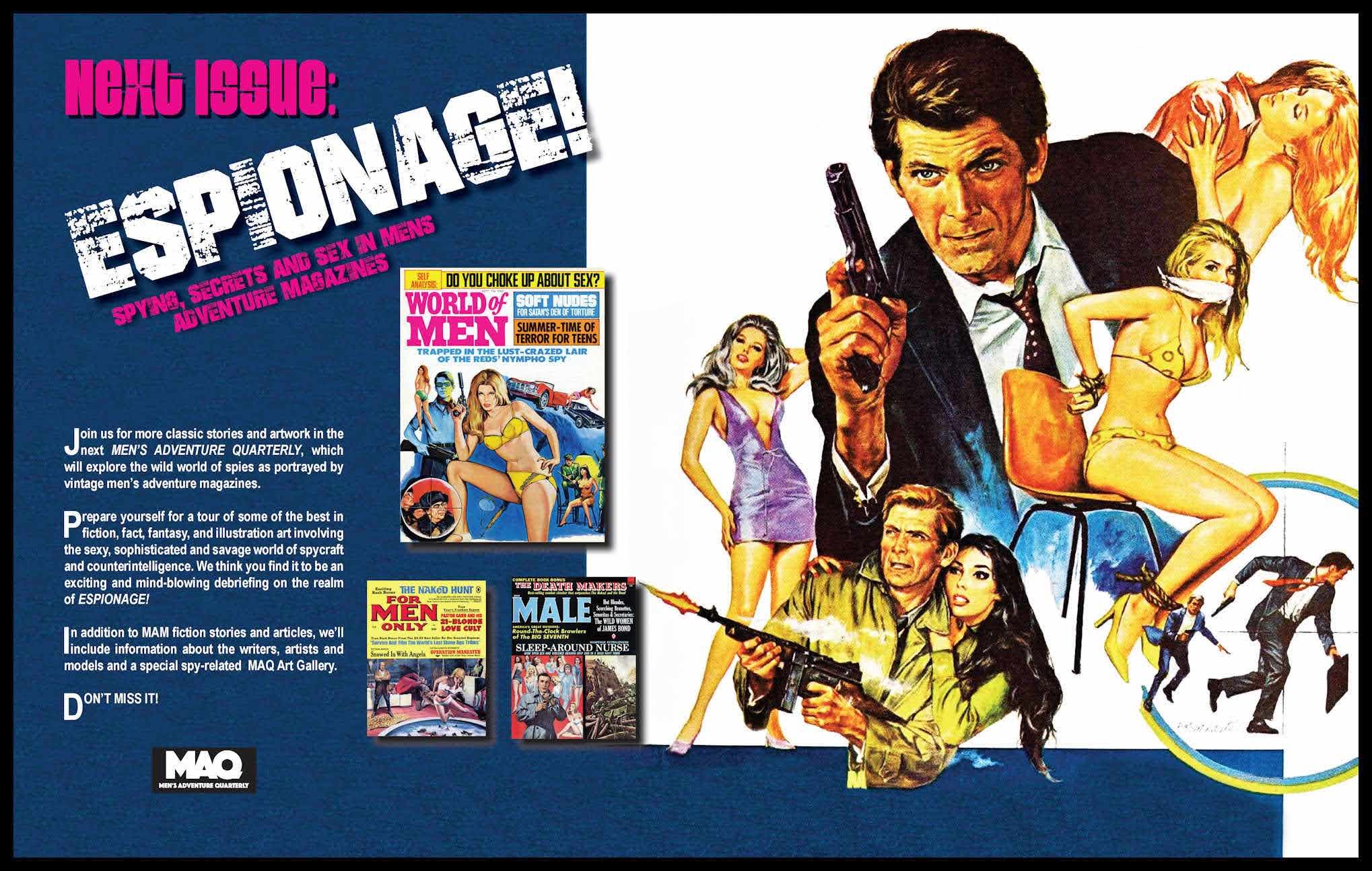 In addition to a terrific set of stories and artwork, MAQ #2 will include a special introduction about the connections between vintage paperbacks and MAMs by Paperback Warrior Tom Simon and a GAL-lery featuring some famous Bond Girls.

If you join the Men’s Adventure Magazines & Books Facebook group, where I post daily, you’ll be among the first to know when it’s available.