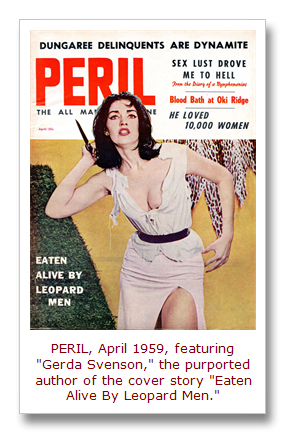 As I noted in a previous post, there really were “Leopard Men” in Africa.

They were members of a secretive religious cult called The Leopard Society. 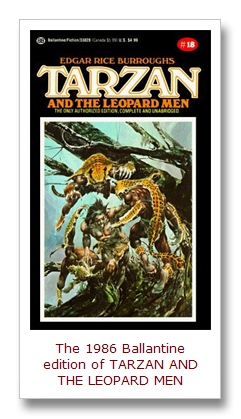 They actually did wear leopard costumes and gloves with metal claws. They also practiced ritual murder and cannibalism.

However, even though Leopard Men did exist, fictional stories about them are more common than the relatively few historic accounts.

The first and most famous was Tarzan and the Leopard Men by Edgar Rice Burroughs.

It initially appeared in 1932 as a serial in Blue Book magazine — the early pulp fiction periodical that later morphed into the men’s post-WWII pulp mag Bluebook.

Tarzan and the Leopard Men was first published as a book in 1935. Its popularity led to other fictional tales of Leopard Men in magazines, novels, comics, movies and even a few vintage TV shows.

I’ve seen at least a half dozen stories about Leopard Men in men’s adventure magazines from the 1950s and 1960s — and they are all pretty wild.

For example, the gory Man’s Magazine story I featured in my previous post about them (“Leopard Men! Africa’s Greatest Terror”) starts with a scene in which:

“…four victims had been disemboweled, their throats slashed to ribbons, their eyes torn from their heads and their sex organs clawed from their bones.” 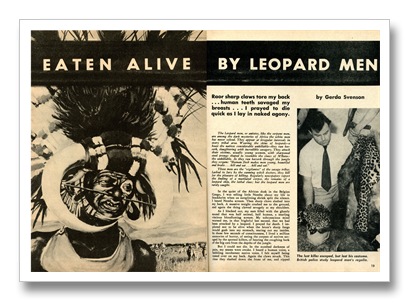 This is portrayed as a true story, written by “Gerda Svenson.”

Of course, it’s almost certainly a piece of pulp fiction dreamed up by one of the male authors who created stories for men’s adventure mags back in the late 1950s.

“Gerda” tells us the horrific story of how she was abducted by Leopard Men in the Belgian Congo.

They take her to their secret hideout, rip off her dress (natch) and literally start eating her alive. Amazingly, Gerda manages to fend them off, kill a couple with one of their own clubs and escape.

Inside, the story is illustrated with a great but uncredited painting of a wild-looking cannibal with filed teeth (who looks more like a New Guinea native than an African to me) and a photo that supposedly shows a man studying one of the leopard costumes worn by Gerda’s abductors. According to the caption, he’s a British policeman (who apparently just happened to be in the Belgian Congo at the time).

There are also some random stock photos of Africans thrown in, with creative captions designed to make them seem relevant to the story.

One caption suggests that the tribal scarifications decorating a man’s face are old scars from an attack by Leopard Men. 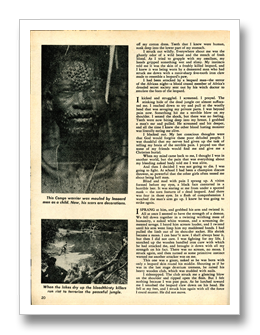 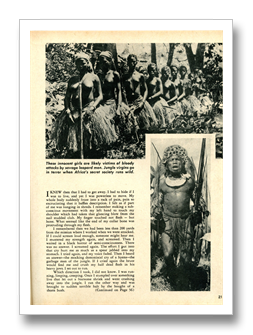 I believe the knife-wielding babe shown on the cover of the April 1959 issue of Peril is supposed to be Gerda Svenson.

She looks pretty fierce. (And hot.) 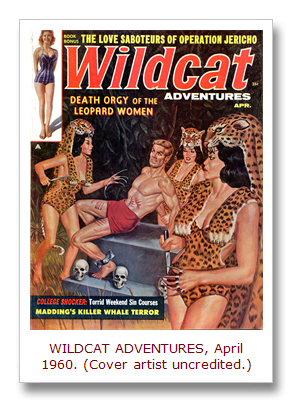 But she’s not quite as fierce (or hot) as the women in the cover painting on the April 1960 issue of Wildcat Adventures magazine.

Those are Leopard Women, baby!

“Two of the leopard women had evidently been acting as guards on the outskirts of the clearing, for they had cleverly crept up behind me and captured me.
Snarling and hissing like the giant cats they claimed a blood-relationship with, they fell on me, digging their claws and teeth into my body and dragging me into the firelight of the clearing.
Instantly, upon seeing me, the rest of the leopard women sent up a weird high-pitched wailing, which I knew from my investigations was their way of showing thanks to their leopard gods for sending them a sacrificial victim — me! They were cannibalistic and after their strange ritual where they cut out my heart while I was still alive they would eat my flesh raw.” 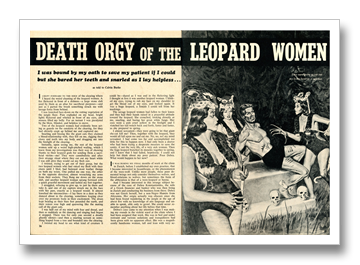 You could view this story as an example of equal opportunity for women.

Or maybe as an example of S&M-tinged Fifties misogyny.