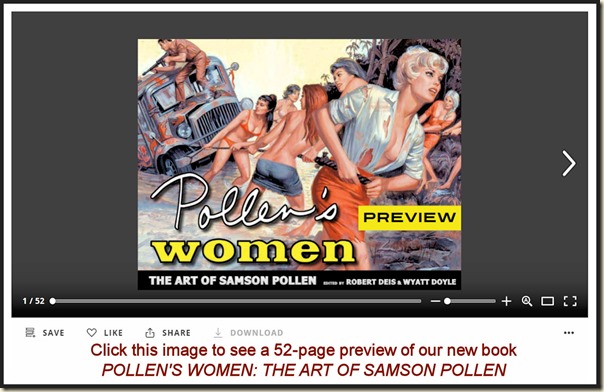 I’m very happy to announce the release of POLLEN’S WOMEN: THE ART OF SAMSON POLLEN, the latest book in the Men’s Adventure Library series that I co-edit and publish with Wyatt Doyle, via his New Texture imprint.

Samson Pollen is one of the great grandmasters of illustration art used for stories published in men’s adventure magazines (MAMs) from the mid-1950s to the mid-1970s.

POLLEN’S WOMEN is a deluxe, full-color, hardcover that features photos of dozens of Sam’s original MAM paintings from his personal archive, along with scans of the stories they were used for from magazines in my collection.

You can see the in-depth preview of the book we posted on the ISSUU.com site or by clicking “Look Inside” on the main listing for it Amazon.

As I write this on February 10, 2018, the main listing on Amazon is new. You can preorder it from Amazon and it should be shipping soon.

If you don’t want to wait for Amazon to start shipping it, you can buy a copy directly from me via my seller listing on Amazon. I already have a batch on hand. (It’s one of the bennies of being co-editor and co-publisher.)

From the 1950s to the 1990s, Samson Pollen created top-notch illustration artwork for various types of periodicals and paperback books and fine art paintings for galleries, commissions and prints.

However, most of his artwork—literally hundreds of paintings—was used as interior illustrations for stories in the Atlas/Diamond group of MAMs published by Martin Goodman’s Magazine Management Company.

The Atlas/Diamond group included many of the best, most popular and longest-running magazines in the men’s adventure genre, such as ACTION FOR MEN, FOR MEN ONLY, MALE, MAN’S WORLD, MEN, STAG and TRUE ACTION. 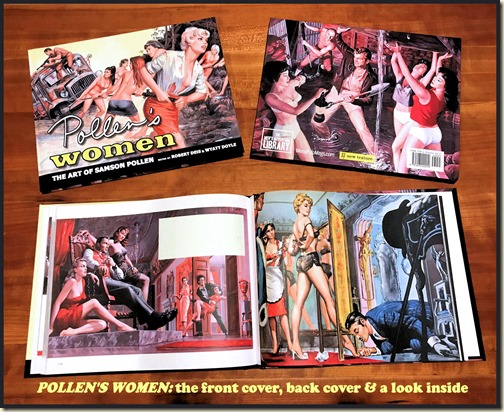 Samson Pollen is currently less well known than some of the other great artists who worked for those magazines; artists like Mort Kunstler, James Bama, Gil Cohen, Charles Copeland and Earl Norem.

That’s largely because most examples of vintage MAM artwork shown in books and internet posts are cover scans, and Pollen specialized in doing interior illustrations.

Although he did do many cover paintings for action, adventure and romance paperbacks during his long career as an illustrator, Pollen preferred—and became a go-to artist for—illustrations printed inside across the first two pages of stories.

To create a book that best showcases his original interior artwork, we used an 8.5″ x 11″ horizontal, landscape format.

That allowed us to put a large photo of each painting on a full page.

In between the photos of paintings, there are pages showing high-resolution scans of the stories they were used in as they appeared in the magazines, with captions noting the magazine titles and issue dates.

In addition to being the first book to feature artwork by Samson Pollen, POLLEN’S WOMEN is the first book I know of that focuses on interior artwork from men’s adventure magazines.

Until now, most of the original paintings Pollen did for those two-page spreads (which were sometimes printed vertically) have never been seen.

Most of the Pollen paintings in the book have never been published anywhere in books or online.

The majority are paintings that Sam has kept stored away in his home in Manhattan.

Some are from the awesome illustration art collection of our friend David O’Dell. David also owns some of the cool original MAM artwork by Earl Norem and racy bachelor mag artwork by Bill Edwards that I’ve featured in past posts on this blog.

Another collector who owns many original Pollens used in men’s adventure magazines is my friend Rich Oberg. It was Rich who put me touch with Sam in 2017, around the time Sam turned 86 years old.

When I asked Sam if he’d like to collaborate on collections featuring his original artwork for our Men’s Adventure Library series, I was thrilled that he gave us the thumbs-up and full access to his personal stash of paintings.

There are so many, we’re planning to use them for several books. After studying Sam’s amazing treasure trove of paintings, we decided to start with a book showcasing his classic MAM artwork that features alluring female subjects. 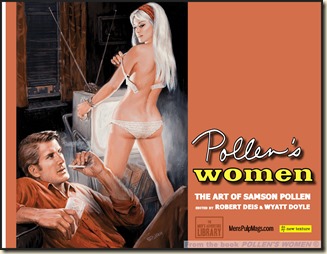 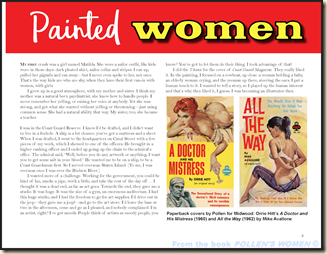 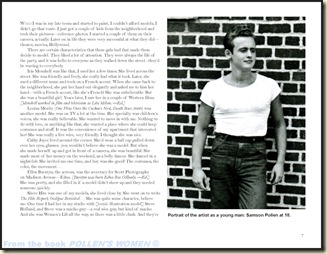 Images of beautiful women were common in MAMs, Pollen was particularly adept at painting scenes that feature beautiful women—and he did scores of them for Goodman’s Atlas/Diamond magazines.

Pollen’s women are not the kind of damsels in distress that are common in artwork done for early pulp magazines and the “sweat mag” subgenre of MAMs.

Pollen’s women are often powerful or dangerous or both. Some are temptresses or femme fatales, seeking to lure a man into doing their bidding. Others are warriors, fighting alongside (or against) the male characters in the scene.

Naturally, given the era, the women in some Pollen illustrations are relegated to being helpmates to the male protagonists. Some are simply unashamedly sexually aggressive. 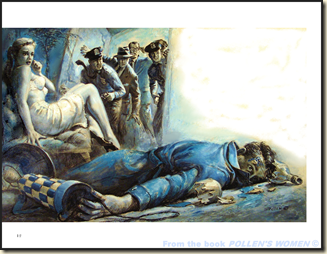 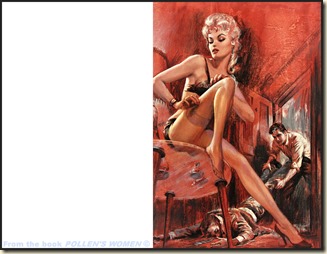 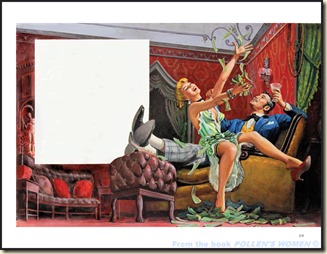 But, while MAMs are of their time and thus not particularly evolved in terms of perspectives on gender roles or sexuality (despite occasional unexpectedly advanced thinking in those areas), Pollen’s women are almost never helpless victims.

In fact, “bondage and torture” style stories and artwork were only prevalent in the “sweat mag” subgenre, which account for less than a third of the more than 160 different MAM titles that were published—and even less of the total readership.

The Atlas/Diamond group Samson Pollen worked for (and most other mid- and top-tier MAMs) didn’t feature such stuff. 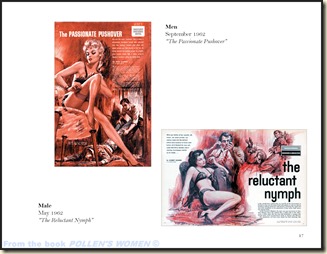 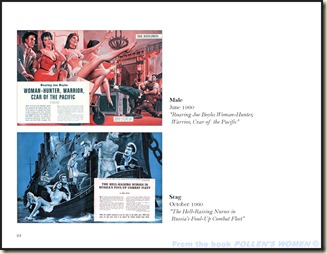 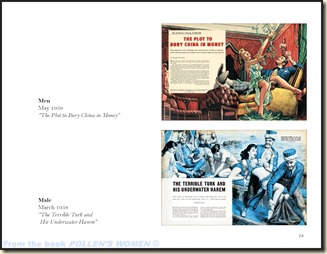 Another revelation comes from being able to see Pollen’s original MAM paintings. They are far more lush and painterly than you can tell from seeing them in magazine spreads, surrounded by headlines, subheads and text, and printed on medium- to low-quality paper.

Samson Pollen’s paintings stand on their own as artwork.

Artists in the realm of “fine arts” can generally choose the scenes they paint, and their paintings may or may not try to convey a story about what’s portrayed.

Professional illustrators are hired to depict scenes to accompany specific stories. Yet within the boundaries of those limitations, top illustrators like Samson Pollen are able to use their skill and imagination to create exceptional art. 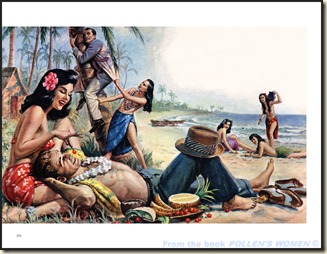 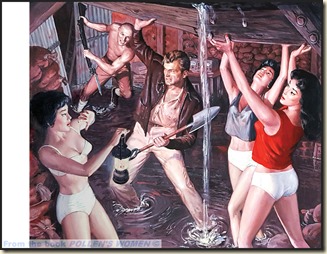 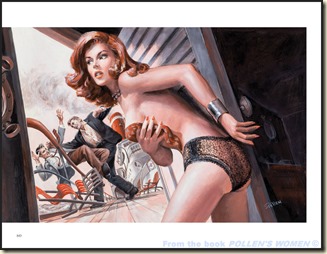 Artists who created men’s adventure mag illustrations were given little to go on as far as the stories they were illuminating; usually no more than a one to three sentence description of the story, and minimal guidance from the magazine’s art director on what setting, action and characters he wanted depicted.

The artist was then expected to do initial sketches, take any reference photos of models he needed, and submit a finished painting in a matter of days.

Instead of being hamstrung by the strictures of illustrating stories, Pollen soared. 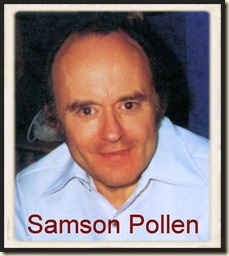 It was a challenge on many levels, but one that Sam not only rose to again and again but relished.

As Sam explained to us:

“They might say something like ‘Well, the hero has an automatic weapon in one hand and he’s carrying a woman in another hand and she’s holding a dog and they’re climbing up a cliff. So, I’d have to come up with a solution. What I would do is visualize it. I’d try to look at the scene and I’d see it in my imagination. That’s the part I liked the most: trying to make sense out of something and create a story of it in my mind, then translate that into a painting.”

As we worked on POLLEN’S WOMEN, we had the pleasure of talking with Sam many times.

We transcribed Sam’s recollections about his life and career and turned them into a chapter in the book.

If you’re a fan of his work, or men’s adventure magazines and mid-20th Century illustration art in general, I think you’ll find this autobiographical chapter to be fascinating reading.

As I wrote in the brief introduction to the book, Wyatt and I love Samson Pollen artwork and believe he deserves wider recognition as an artist.

We hope this book will help make that happen.