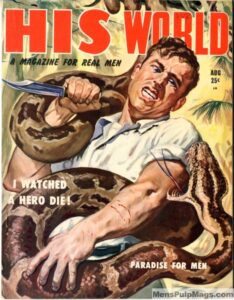 I call them “killer creature” covers.

The creatures are generally portrayed as vicious man-eaters, regardless of whether they normally would be in reality.

But the killer creature covers on men’s pulp mags are like OUTDOOR LIFE or SPORTS AFIELD covers on drugs.

Expanding on that metaphor, I’d say the drugs would be a mix of LSD, testosterone and Viagra.

I hate and despise cruelty to animals or humans in the real world. So how can I love killer creature illustrations and stories from men’s adventure magazines?

They’re products of imagination and talent that are, simply put, really cool!

You either get what I’m talking about or you don’t. 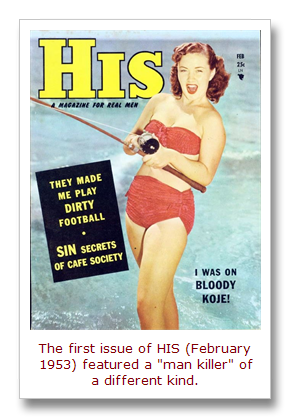 If you do, you’ll be able to appreciate the coolness of some of men’s pulp mags with killer creature covers that I recently added to my collection.

Several are relatively rare, like the August 1953 issue of HIS WORLD, which features an outstanding snake attack scene by an uncredited artist.

HIS WORLD started out as HIS magazine. It was first published using that shorter name in February 1953, with the subtitle “A MAGAZINE FOR REAL MEN.” (Presumably, that excluded those girly dudes who read articles about the latest men’s fashions in magazines like ESQUIRE.)

In August 1953, the name was changed to HIS WORLD. Only three other issues were published after that, in April, June and August of 1954.

In the early 1950s, as the men’s adventure mag genre was developing, publishers like Westridge weren’t quite sure whether covers with “cheesecake” photos of female models or covers with traditional pulp magazine-style painted covers would stand out and sell better on newsstands.

So, some tried both or alternated between the two.

One attempt to address this question was the legendary split-run “painting vs. photo” market test conducted by MAN’S MAGAZINE in February 1954, which I discussed in a previous post on this blog.

The premiere issue of HIS featured a shapely gal in a two-piece bathing suit who’s pretending to surf fish.

The cover of the second issue, published in May 1953, used a pulp adventure painting by an uncredited artist. It shows a mountain climber getting a potentially deadly surprise from a snow leopard. 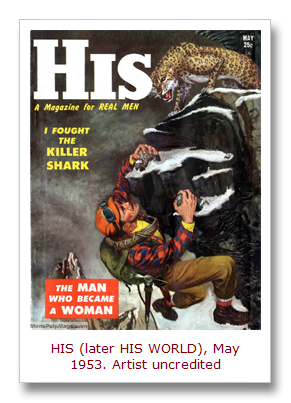 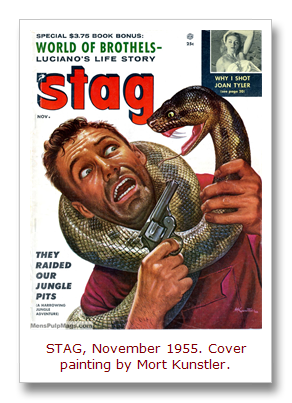 That’s an excellent piece of vintage illustration art. But it’s not quite as pulpy and exciting as the painting on the August 1953 issue of HIS WORLD (at the top of this post), which shows a guy desperately fighting a huge snake with a hunting knife. 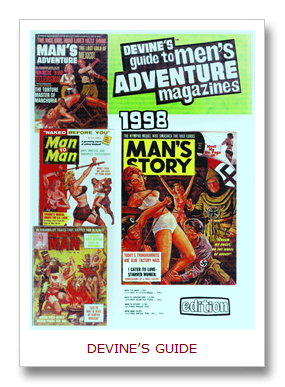 Another mag I bought recently that has a terrific snake attack cover painting is the November 1955 issue of STAG. That awe-inspiring scene was created by Mort Kunstler, who became (and still is) one of the top painters of historical art in the country.

Mort did many animal attack cover paintings for men’s adventure magazines early in his career.

In fact, as he noted in the interview published here a while ago, the first cover painting assignment he got from the major men’s pulp mag publisher Magazine Management was for a tiger attack scene.

Mag Management’s STAG was one of the greatest and longest-running men’s adventure magazines.

According to DEVINE’S GUIDE TO MEN’S ADVENTURE MAGAZINES, over 300 issues were published between March 1950 and February 1976.

As I was putting this post together, I reread the text in the chapter about killer creature covers in the book MEN’S ADVENTURE MAGAZINES (which features covers and original artwork from the collection of my friend Rich Oberg).

It says STAG published what is probably the earliest example of a killer creature cover — the legendary “MONKEY MADNESS” cover on the January 1951 issue discussed in a recent post here.

By the way, as I’ve mentioned before, I think the original 2004 softcover edition is the best edition of MEN’S ADVENTURE MAGAZINES.

It has a whole chapter about Nazi B&T covers and an interview with artist Norm Eastman that are missing in the 2008 hardcover edition.

The 2004 edition has an especially creepy “killer creature” painting on its cover, the “scorpion torture” scene originally featured on the September 1959 issue of CHAMPION FOR MEN. 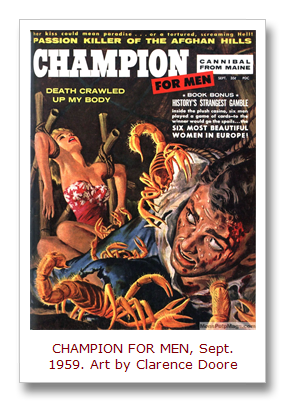 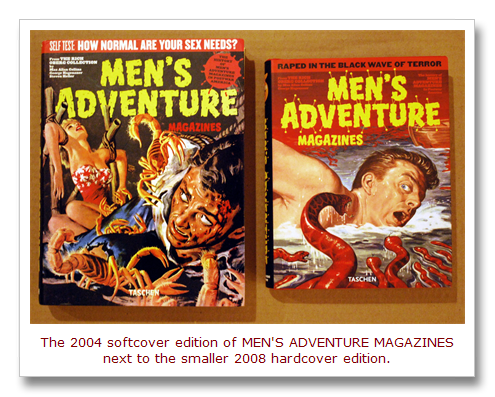 That painting was done by the great pulp artist Clarence Doore, for the story “DEATH CRAWLED UP MY BODY.”

The cover of the smaller 2008 edition of MEN’S ADVENTURE MAGAZINES features a snake attack painting by artist Wilbur “Wil” Hulsey, originally used on the September 1961 issue of TRUE MEN STORIES.

Another magazine I snagged not long ago is the March 1957 issue of ADVENTURE. The cover painting, by Mort Kunstler, shows a diver being attacked by both a giant eel and a shark.

In the magazine, the painting is credited to “Emmett Kaye,” a pseudonym Mort used frequently during his men’s adventure years. 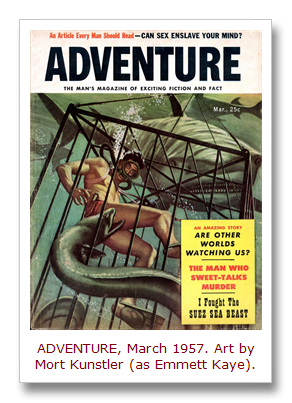 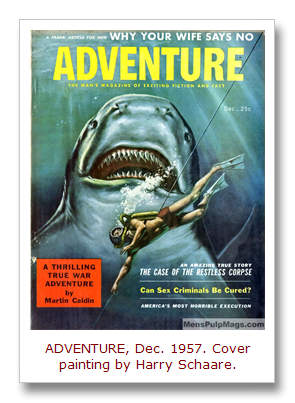 There’s an even bigger, Megalodon-size shark menacing a diver on the December 1957 issue of ADVENTURE. That awesome cover painting is by Harry Schaare.

Schaare was a top magazine and paperback illustrator who became more widely known for his sports and Western paintings before his death in 2008.

Unfortunately, the artist who created the mountain man vs. grizzly bear painting on the July 1957 issue of CHAMP is uncredited.

I wish I knew who it was, because it’s a masterful piece of pulp art and it reminds me of the legendary mountain man Hugh Glass, the central character in one of my favorite Richard Harris movies, MAN IN THE WILDERNESS. (Glass is also the subject of the new book HERE LIES HUGH GLASS: A MOUNTAIN MAN, A BEAR, AND THE RISE OF THE AMERICAN NATION.)

Issues of CHAMP are pretty hard to find. Only five were published between May 1957 and January 1958, by Hillman Periodicals, Inc.

So I felt doubly lucky when I snagged both the July 1957 and November 1957 issues in a recent eBay auction.

The November issue features an unusual killer creature story and cover painting about a horse that’s a “man-eater.” (The artist is uncredited again, damnit!) 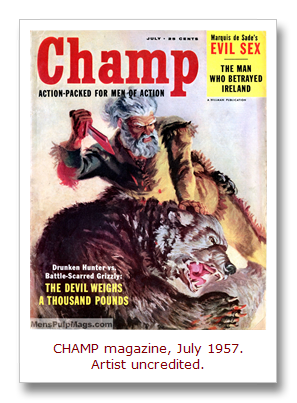 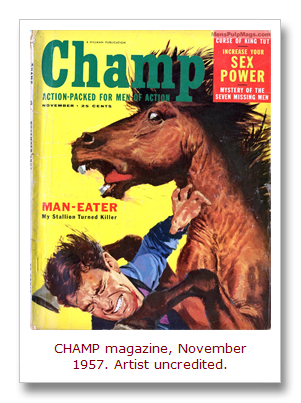 A carnivorous horse? Yep. In men’s adventure magazine stories, virtually any animal large or small, meat-eater or vegetarian, could be a deadly, human-munching menace.

For example, I recently bought an issue of HUNTING ADVENTURES (Spring 1956) that has great killer turtle painting, for the tale “WE COULDN’T TEAR THEM OFF.”

The painting is by Tom Ryan, who later became best known for his Western art.

HUNTING ADVENTURES is one of the few men’s adventure periodicals that actually focused on hunting and fishing stories.

I put it in the men’s adventure genre rather than the mainstream outdoor sports genre due to the nature of its stories. They tend to be bloodier and wilder than those in magazines like OUTDOOR LIFE or SPORTS AFIELD. And, many were far sexier than anything you’d find in a hunting and fishing mag.

For example, check out “LOVE SLAVE OF A RED-HOT BLONDE SORCERESS,” a story from the Summer 1956 issue of HUNTING ADVENTURES that I featured in a past post. 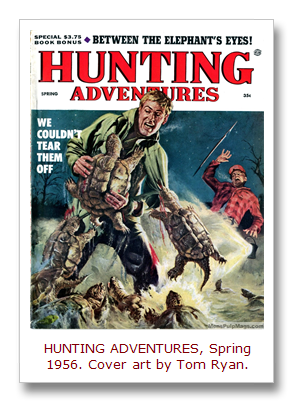 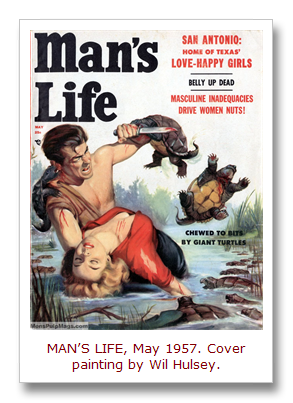 As cool as Tom Ryan’s killer turtle painting is, there’s one I cherish even more. It’s the painting Wil Hulsey created for a grisly yarn from the May 1957 issue of MAN’S LIFE titled “CHEWED TO BITS BY GIANT TURTLES.”

Hulsey’s artwork and the story itself add another classic pulp element to the gonzo killer turtle scenario: a sexy damsel in distress.

“CHEWED TO BITS…” is one of the stories included in the forthcoming anthology of men’s adventure magazine stories I’m editing with author/musician Josh Alan Friedman and writer/photographer Wyatt Doyle. It will be published by Wyatt’s company NEW TEXTURE in ebook and traditional print format in the near future. (Probably in early August.)

As you may know if you read this blog, artist Wil Hulsey also created the iconic “WEASELS RIPPED MY FLESH” cover painting for the September 1956 issue of MAN’S LIFE.

That, of course, is the most famous men’s adventure magazine cover of them all, which is why we picked WEASELS RIPPED MY FLESH as the title of our forthcoming anthology.

Well, that and the fact that we think it’s a title that just really sounds cool. And, yes, the complete original story “WEASELS RIPPED MY FLESH” will also be included in the anthology. Check back here soon for an announcement of the official publication date.

Some of the books recently published by NEW TEXTURE…