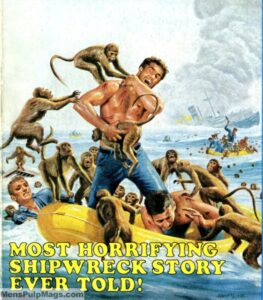 If you ask my wife, she’ll say I already own way too many old men’s adventure magazines.

They now fill up bookshelves on every wall of my little man cave/office. But I still can’t resist buying more when I see issues I just gotta have. (Sorry, Honey.)

For example, how could I not buy the August 1969 issue of FOR MEN ONLY when I saw a copy pop up on eBay recently?

There are two cool pulp art paintings on the cover. And, one of them goes with a story that is legendary in the realm of men’s adventure magazines.

It’s the painting in the left inset panel, which has the signature “Emmett Kaye.”

Emmett Kaye is a pseudonym Mort Kunstler often used when he did cover paintings and interior illustrations for men’s pulp mags.

And, Kunstler, of course, is one of the greatest of the many great artists who worked for men’s adventure magazines published from the early 1950s to the mid-1970s.

In the decades since then he has become America’s premier painter of historical artwork and is especially renowned for his Civil War scenes. (In case you missed it, click this link to read my interview with Mort.)

Kunstler’s cover painting on the August 1969 issue of FOR MEN ONLY is his depiction of the classic “Monkey Madness” story.

That wild example of a “killer creature” yarn was reprinted under various titles in at least five different men’s pulp mags between 1951 and 1973, using illustrations by five different artists. And, there may be more that I don’t know about.

But it was almost certainly penned by one of the imaginative pulp writers who contributed to the men’s adventure genre. 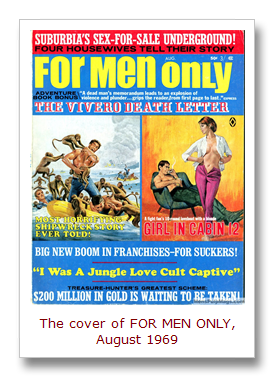 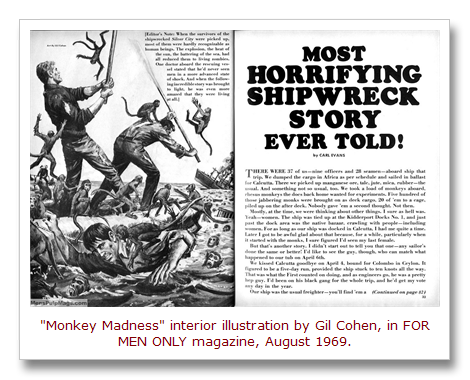 It’s basically a horror story about the fate of merchant ship that was carrying hundreds of African rhesus monkeys that were destined to be used as test animals in medical labs.

En route, the ship’s boilers explode, killing most of the crew. As the vessel sinks, one of the surviving crew members takes pity on the monkeys and sets them free. His act of kindness turns out to be a big mistake. 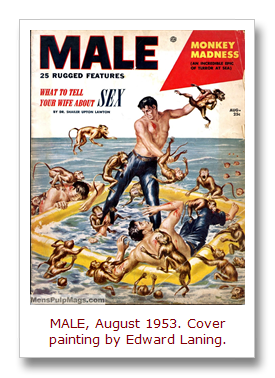 Nine seamen who are left make it onto a life raft. Almost immediately, hundreds of desperate monkeys begin swarming onto the raft with them.

This leads to a gruesome battle for survival. Not all of the men live through it. None of the monkeys do.

The traumatized shipmates who make it back to land suffer from nightmares for the rest of their lives.

In the last lines of the story, the narrator says:

“For those who didn’t make it — maybe they were lucky. For those of us who’d been picked up, there are always the nightmares. And me — I still have them. I wake up in the middle of the night, scared stiff and sweating like a pig, and not until I’ve got the light on do I believe that I’m not being strangled by insane monkeys.”

I first became intrigued with this story when I interviewed Dr. David M. Earle, a professor at the University of West Florida who is an expert on vintage pulp magazines.

Dr. Earle is the author of one of the must-have books for fans of the men’s pulp mag genre: ALL MAN! – HEMINGWAY, 1950S MEN’S MAGAZINES, AND THE MASCULINE PERSONA.

He and his students also maintain the Pulp Magazines Project website, a terrific and ever-growing digital archive, as well as the associated PulpMags blog.

When I interviewed Dr. Earle, one of the questions I asked was whether there were any issues of men’s pulp mags that were his particular favorites. 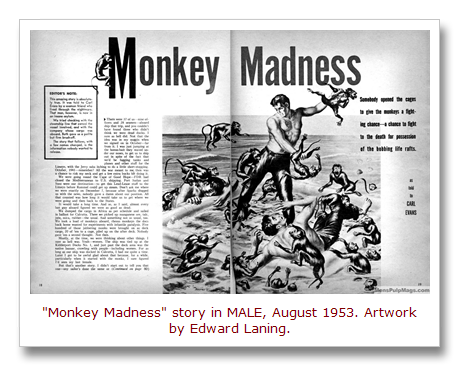 “I of course love magazines like the August 1953 issue of MALE, which features ‘MONKEY MADNESS.’ Three guys in a life raft being attacked by hundreds of monkeys. It’s just so ludicrous.”

When I looked at that issue I didn’t recognize the work of the artist who did the cover painting (also used inside in black-and-white).

The credits said it was done by Edward Laning, an artist who is better known as a mural painter than an illustration artist.

I did recognize the story and realized it was also one of my favorites.

I first saw it in the January 1951 issue of STAG, under the title “MAD MONKEYS MANNED THE LIFEBOATS.”

It’s a cover story on both mags.

The STAG cover painting is uncredited. And, even my collaborator Rich Oberg, the world’s foremost expert on men’s adventure magazines, didn’t know or recognize the artist.

So, I posted a scan of it in the Men’s Adventure Magazines Facebook Group, where nearly 300 fans of vintage illustration art hang out, and asked if anyone else knew.

Sure enough, it was soon IDed by Timothy Isaacson, one of the knowledgeable pulp art buffs in the group. 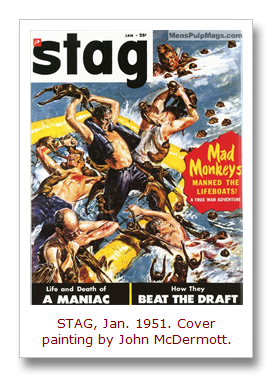 He recognized it as the work of John R. McDermott, a top vintage illustration artist featured on the indispensable American Art Archives site and in several posts on the excellent Today’s Inspiration blog.

“That cover ‘Mad Monkeys Manned the Life Boat’ from Jan 1951 was done by John R. McDermott (1917-1977),” Tim wrote in a post in the FB group. “McDermott started out has an animator for the Disney Studios in Hollywood after high school. With the outbreak of World War II that job ended as he became a Marine in the Pacific Theatre, during which he became a combat artist and made drawings for the corps’ records of actions in the Solomons, Guadalcanal and Okinawa. When the war was over his drawings caught the attention of the folks at BLUE BOOK magazine and his career as expert in military subjects and depictions of them was established. I think he did some work for ARGOSY as well.”

In recent months, I ran across the “Mad Monkeys” story in three other men’s pulp mags.

It was the cover story of MAN’S WORLD in December 1957, under the title “LIFE RAFT MADNESS.”

The painting for that cover is by artist John Leone, who died in 2011 after a long and distinguished career.

As noted at the top of this post, the fourth appearance of the “Mad Monkeys” story I know of was in the August 1969 issue of FOR MEN ONLY.

In that issue, it’s titled “THE MOST HORRIFYING SHIPWRECK STORY EVER TOLD!”

And, although the cover painting used for the story is by Mort Kunstler, the interior illustration is by Gil Cohen — another great artist who once did artwork for men’s adventure magazines. Cohen is now renowned as one of the nation’s top military aviation artists. (Click this link to read my interview with Gil if you missed it.)

The fifth reprint of the “Mad Monkeys” story I’ve seen is in the 1973 one-off, THE BEST OF MALE AND FOR MEN ONLY. 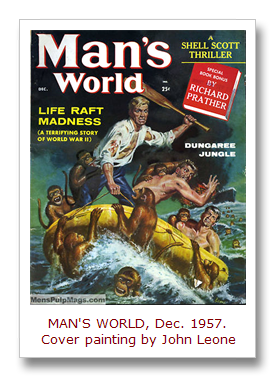 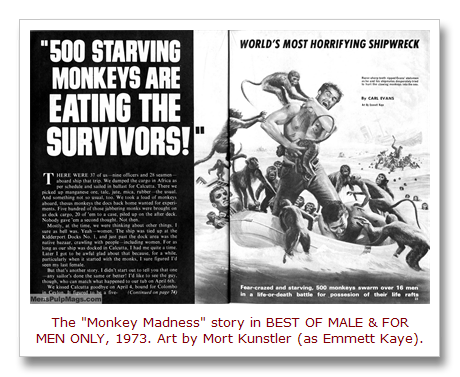 The title used in that one is “500 STARVING MONKEYS ARE EATING THE SURVIVORS!” The illustration is a black-and-white version of Mort Kunstler’s cover painting for August 1969 issue of FOR MEN ONLY.

If you know of other appearances of the story, please shoot me an email or post a note in the Men’s Adventure Magazines Facebook Group. I love the story (and being a completist, when I can be).

By the way, the “Monkey Madness” story is one of the many wild men’s adventure magazine yarns included in our WEASELS RIPPED MY FLESH! anthology, which is now available on Amazon.com.

Further reading: books featuring the artwork of artists mentioned in this post…