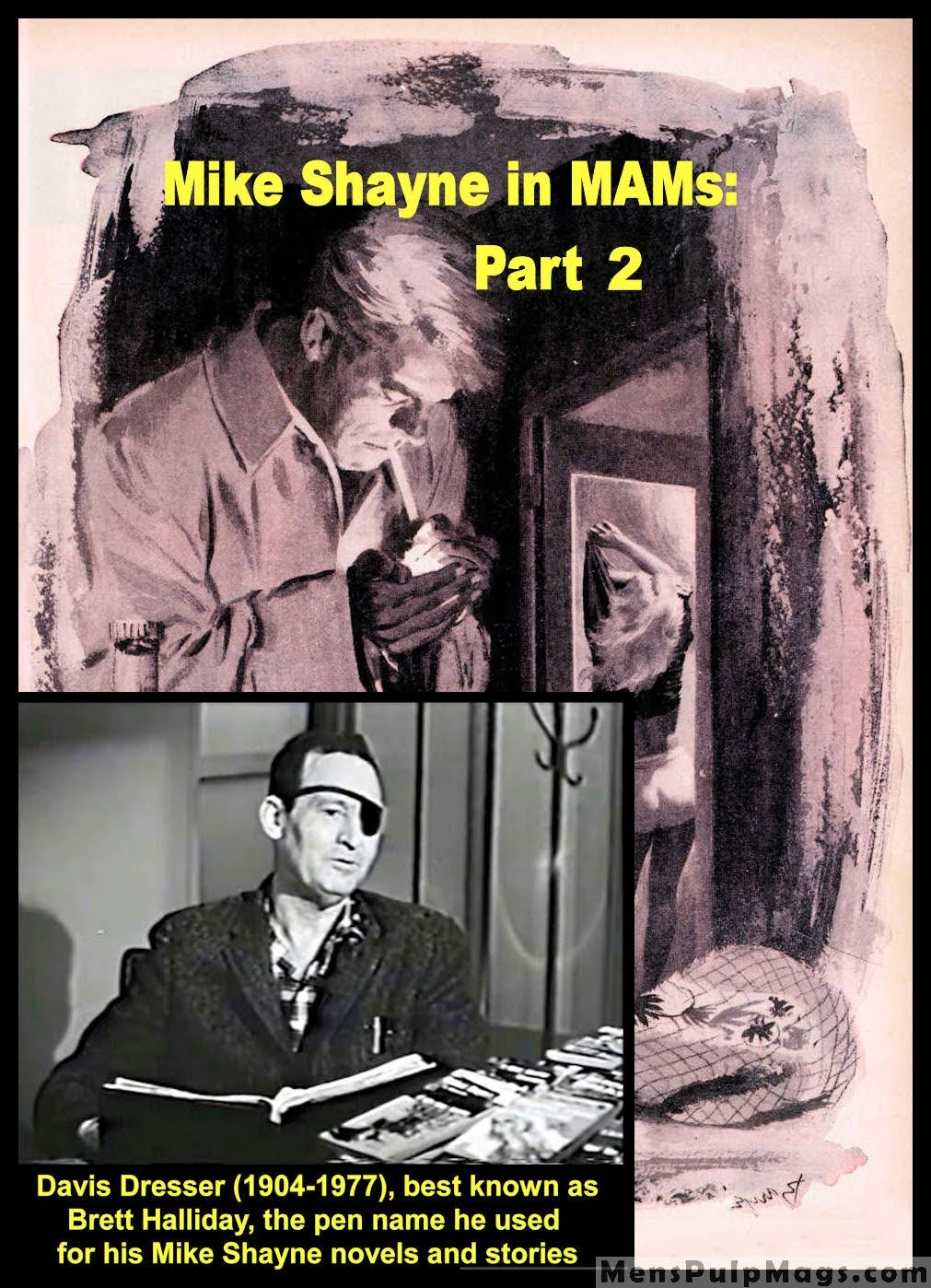 When Davis Dresser’s novel, DIVIDEND ON DEATH, was published in 1939 under the pseudonym Brett Halliday, it launched what became a huge multi-decade multimedia empire.

It was the first appearance of his tough, red-headed, Miami-based Private Investigator Mike Shayne.

The Mike Shayne character went on to appear in more than 70 novels and 300 stories written by Dresser and other writers tapped to use Brett Halliday as a pen name.

There was also a short-lived Dell comic book series based on the Mike Shayne novels.

It became one of the most successful crime digest magazines ever published, running for 337 issues over a period of three decades.

Scores of stories by Dresser and hundreds by many other notable writers were published in that magazine until it finally folded in 1985, seven years after Dresser’s death.

One of those writers I admire a lot is James Reasoner. He wrote many Mike Shayne stories for the magazine under Dresser’s name and went on to become a prolific writer of Western, action/adventure and historical novels.

Another is my friend Paul Bishop. Paul is a former LAPD detective who became a popular novelist, an editor of action/adventure novels for his own imprints and, more recently, for Wolfpack Publishing. He’s also co-host of the excellent Six-Gun Justice Podcast with fellow writer and Western maven Richard Prosch.

Earlier this year, when I bought THE MIKE SHAYNE PRIVATE EYE COMIC COLLECTION, published by Bill Cunningham via his Pulp 2.0 Press imprint, I discovered that Paul had written the introduction.

In it, he notes that the first fiction story he had accepted and published was in MIKE SHAYNE MYSTERY MAGAZINE.

When I read Paul’s intro, it reminded me that “Book Bonus” versions of many Mike Shayne novels appeared in men’s adventure magazines (MAMs) published in the ‘50s and ‘60s.

However, when I Googled around, I discovered there was almost no information online about those MAM appearances other than a list on Philsp.com, the great “Galactic Central” site that provides info about thousands of different vintage magazines.

When I looked through the Galactic Central list, I realized it wasn’t complete. So, I decided to fill that gap by doing a series of posts on this blog.

I started with a post about the first Shayne story I know of in a MAM, “The Naked Frame” in BLUEBOOK, February 1953.

As I explain in that post, it’s touted in the magazine as “Bluebook’s COMPLETE Book-Length Novel by BRETT HALLIDAY.” At that point, no novel version had been published.

The book was released a month later by Torquil Publishing Company, which Dresser created with wife Helen McCloy, a successful mystery writer in her own right. The title he used for the novel was ONE NIGHT WITH NORA.

It was an expanded version of the “The Naked Frame” story in BLUEBOOK. 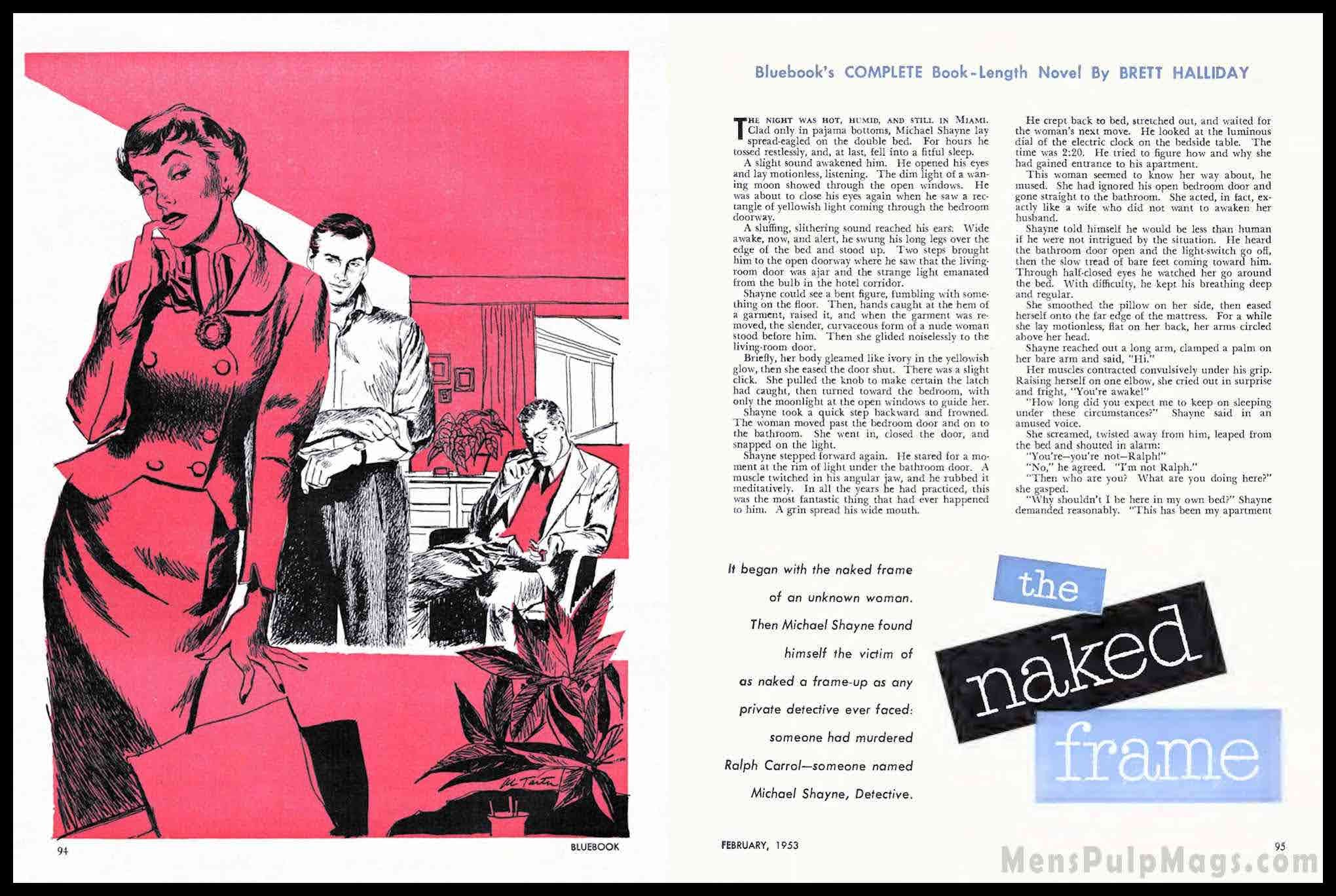 Counting that one, I believe a total of 17 Mike Shayne stories appeared in men’s adventure magazines. Here’s the checklist (please email me if you know of any I missed):

As shown in my previous post, “The Naked Frame” in BLUEBOOK, February 1953 features 6 duotone illustrations by Al Tater. (A duotone is an illustration printed in black and shades of grey, plus one color.) The main 2-page spread, a red duotone, is shown above. You can see all 6 of the Tater illos in my Mike Shayne in MAMs Part 1 post.

The Next Mike Shayne story in a MAM is “Payoff Girl” in STAG, December 1956, a condensation of the 1948 novel BLOOD ON THE STARS. The STAG version features 8 black-and-white illustrations by artist Robert “Bob” Riger: a 2-page spread and 7 spot illustrations.

I’m always exited to find artwork by Riger in MAMs. There are only a handful of examples and they are from early in his career. He went on to become a top sports illustrator and photographer, an award‐winning television director, and a cinematographer. His artwork and photos for SPORTS ILLUSTRATED are especially legendary, earning him a place of honor in The American Sport Art Museum & Archives. 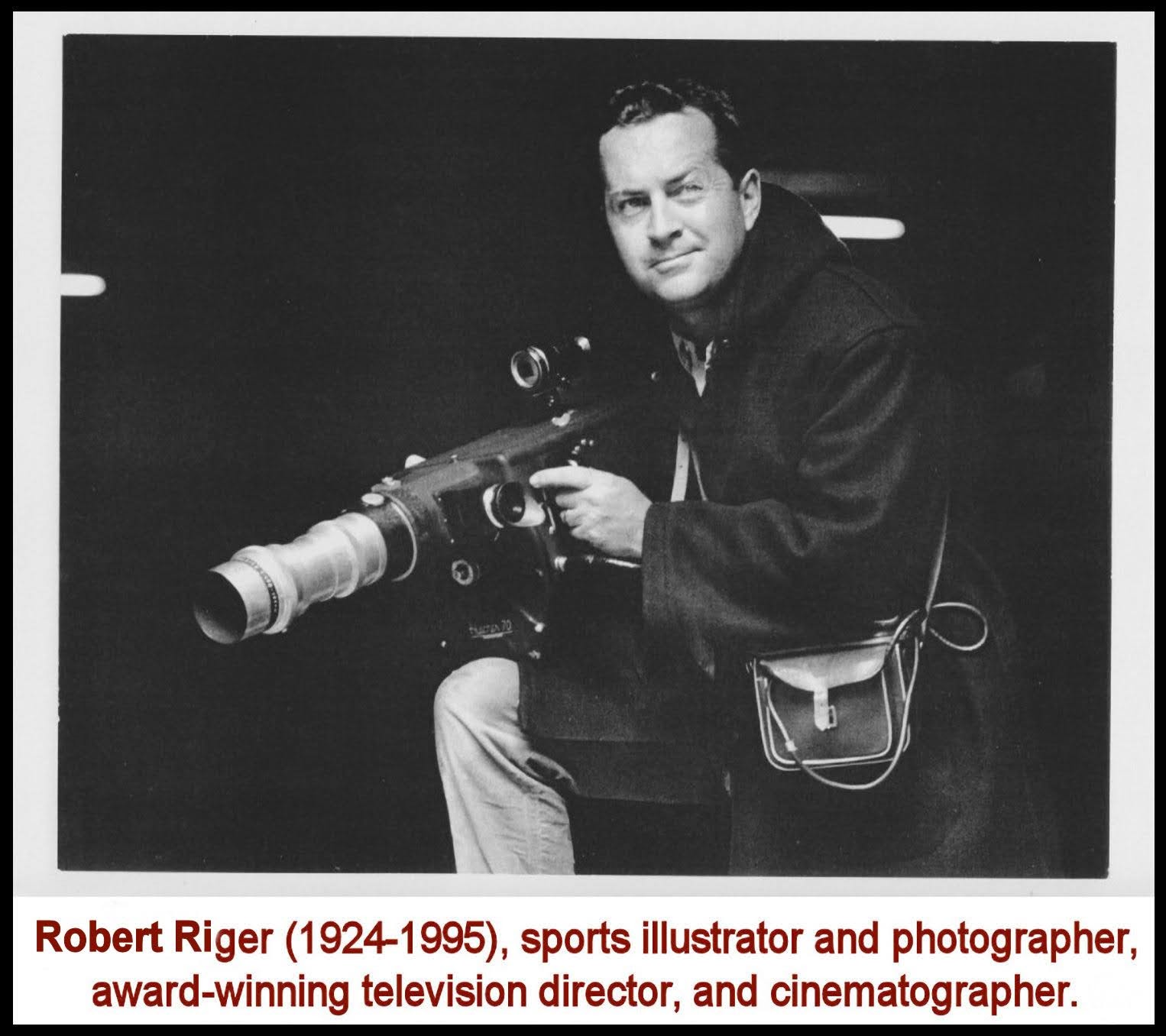 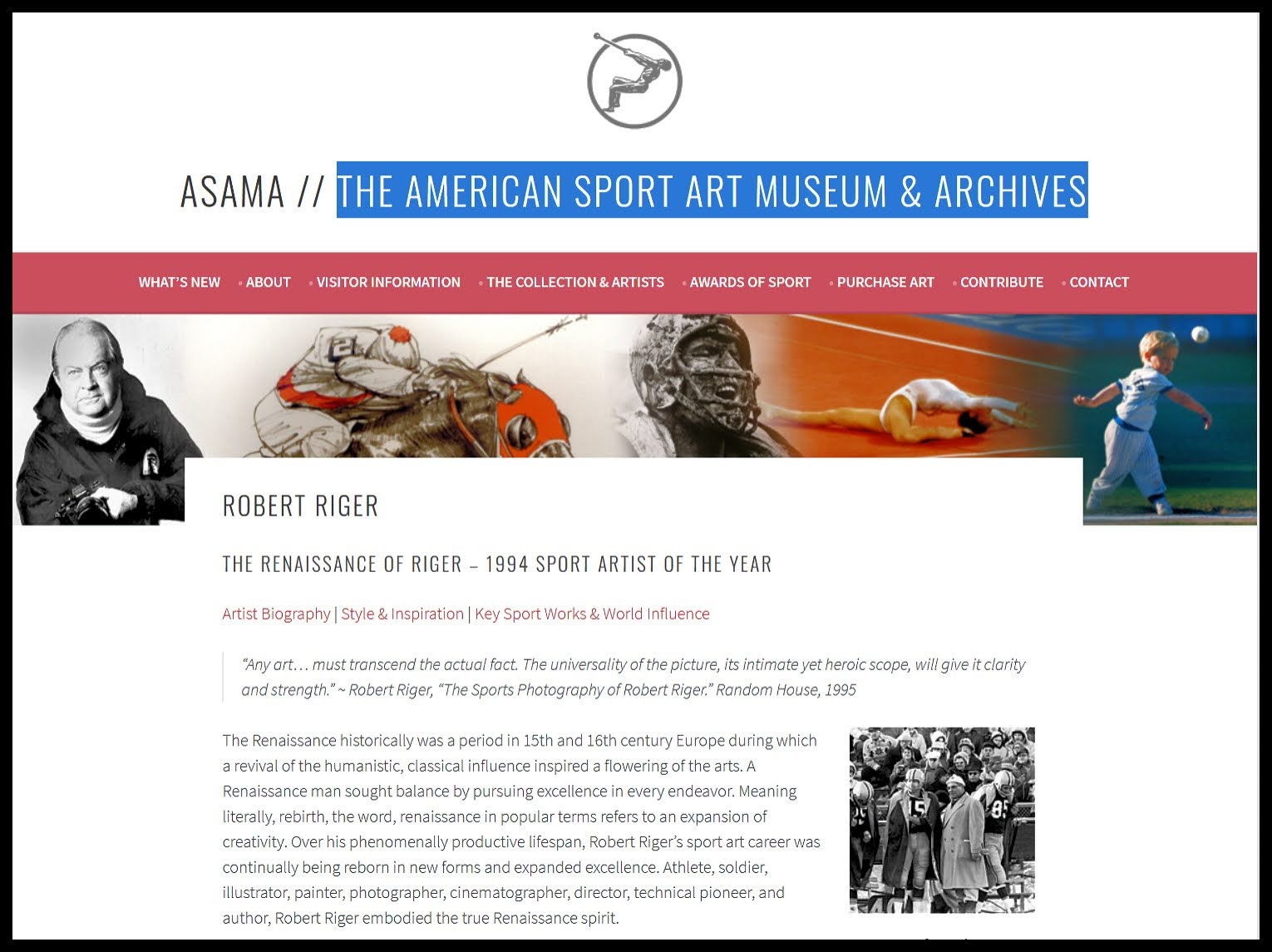 As noted in bios about him, illustration art became a springboard to Riger’s work as a photographer. He initially learned the craft by shooting reference photos for artwork he was doing for magazines and advertisements. From the mid-1950s until his death in 1995, he focused primarily on photography. He took tens of thousands of photos of athletes and sporting events of all kinds and became one of the most successful sports photographers of all time.

You can see some great examples of Riger’s sports art and photography on the official Robert Riger website and many more of his sports photos in the book THE SPORTS PHOTOGRAPHY OF ROBERT RIGER.

The sketch-like artwork Riger did for the Mike Shayne story “Payoff Girl” in STAG, December 1956, shown below, is similar in style to much of his sports artwork. 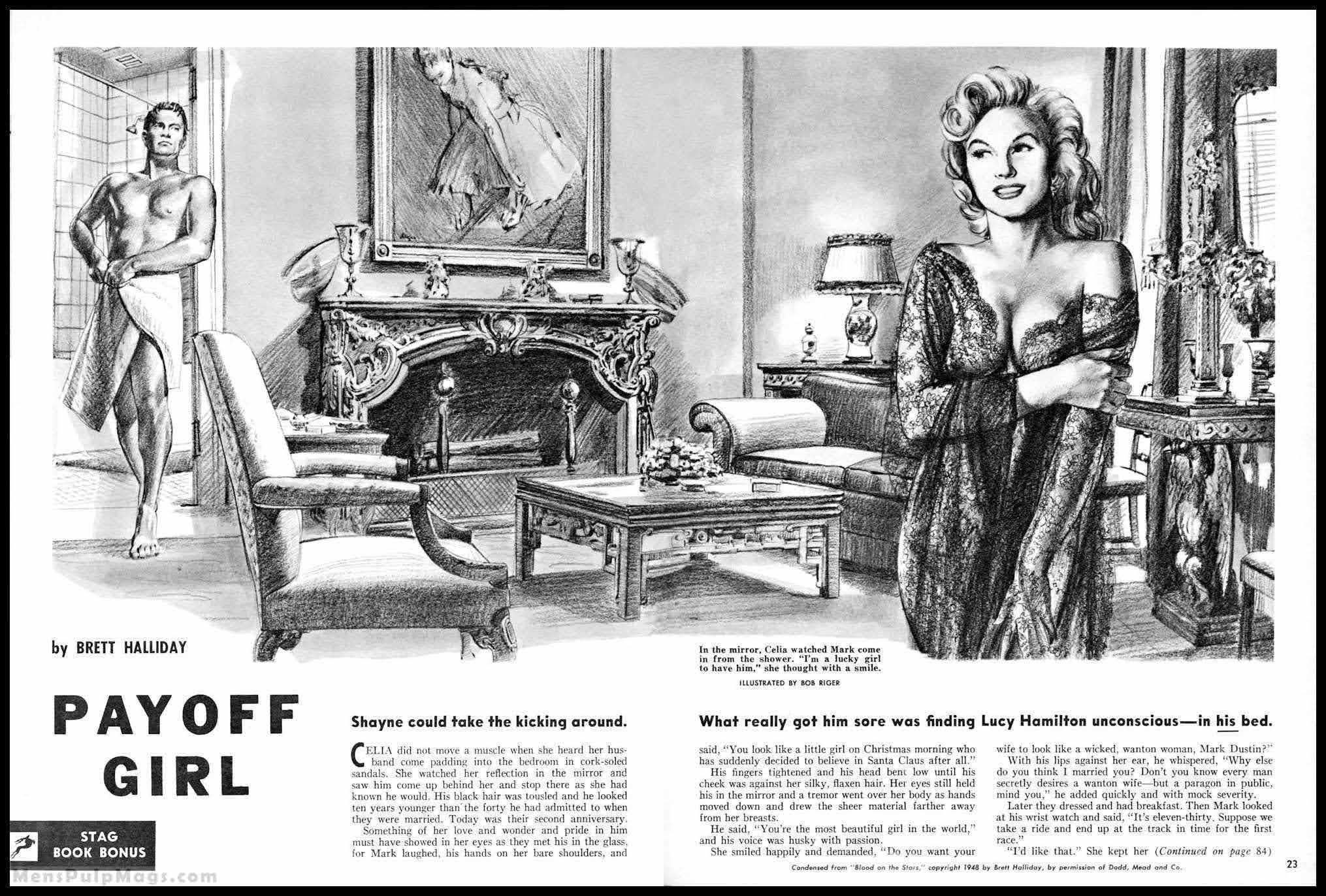 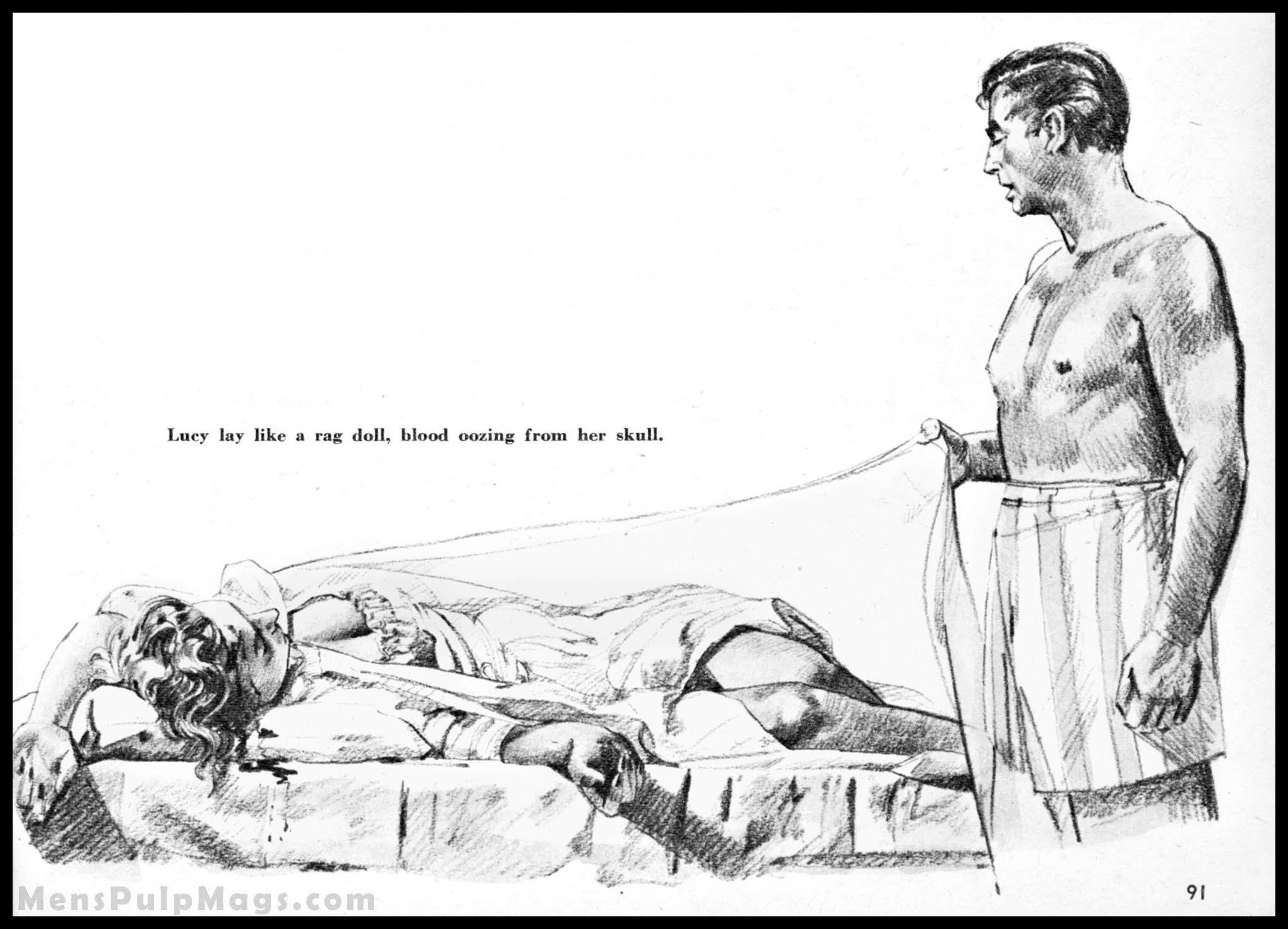 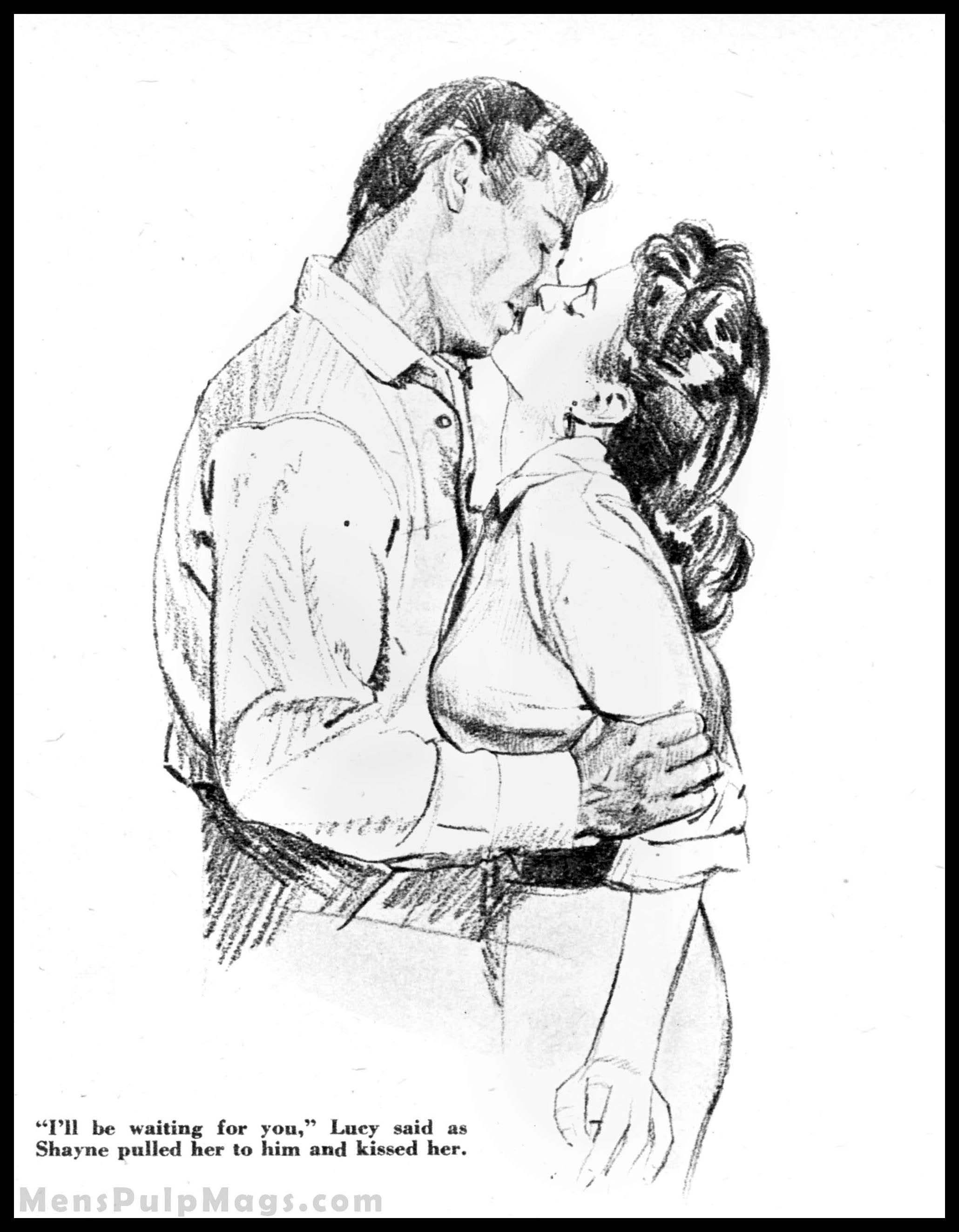 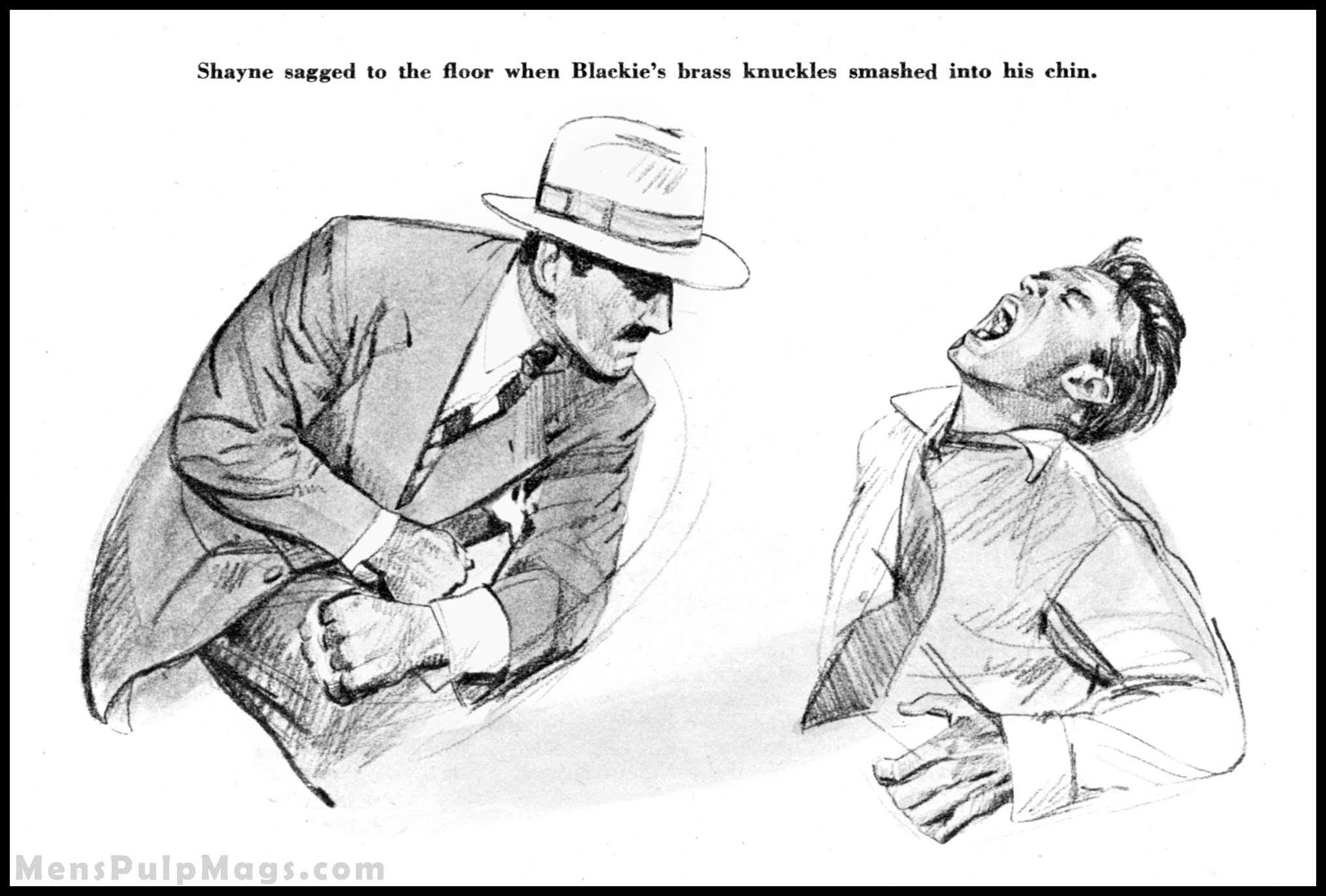 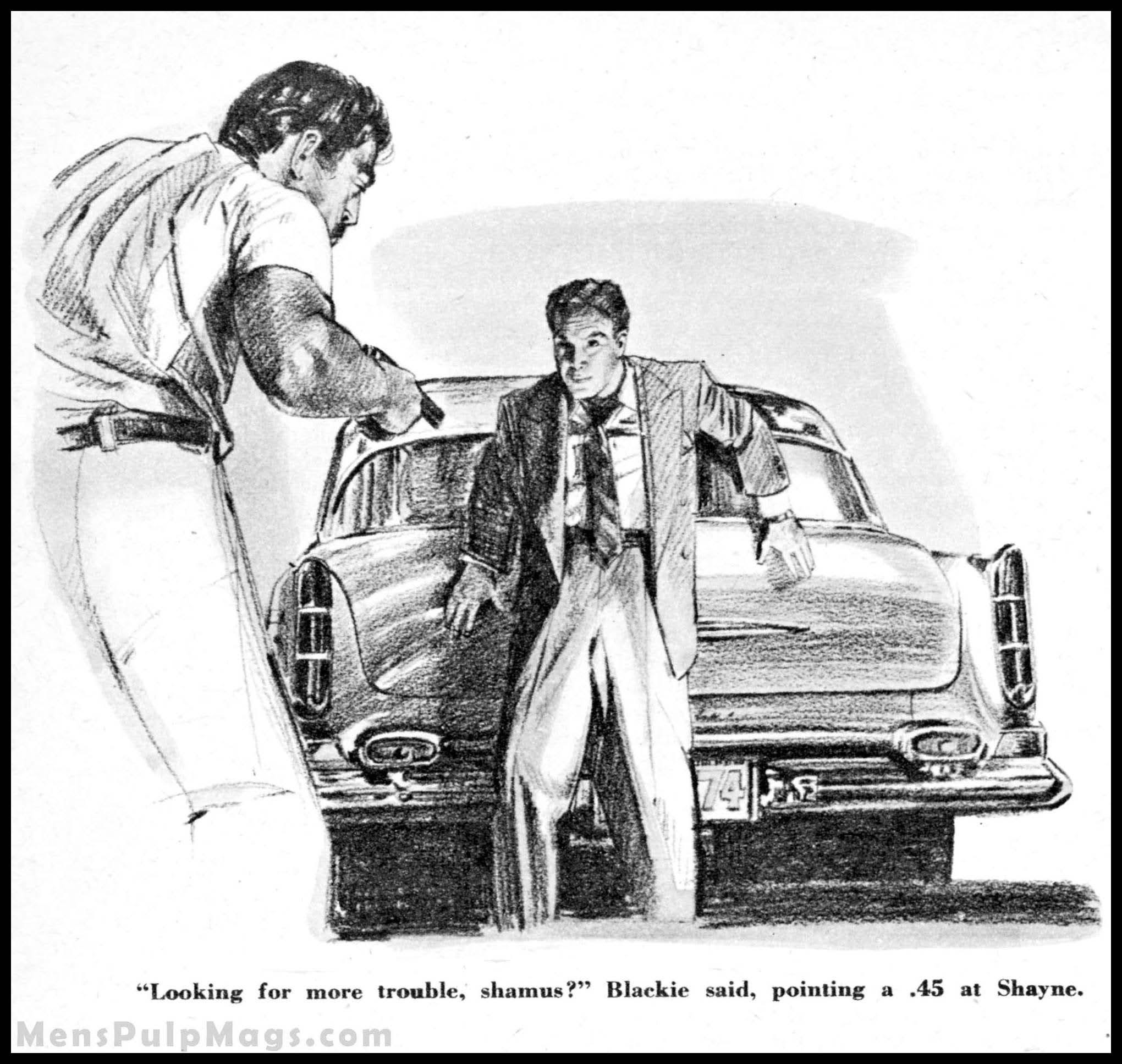 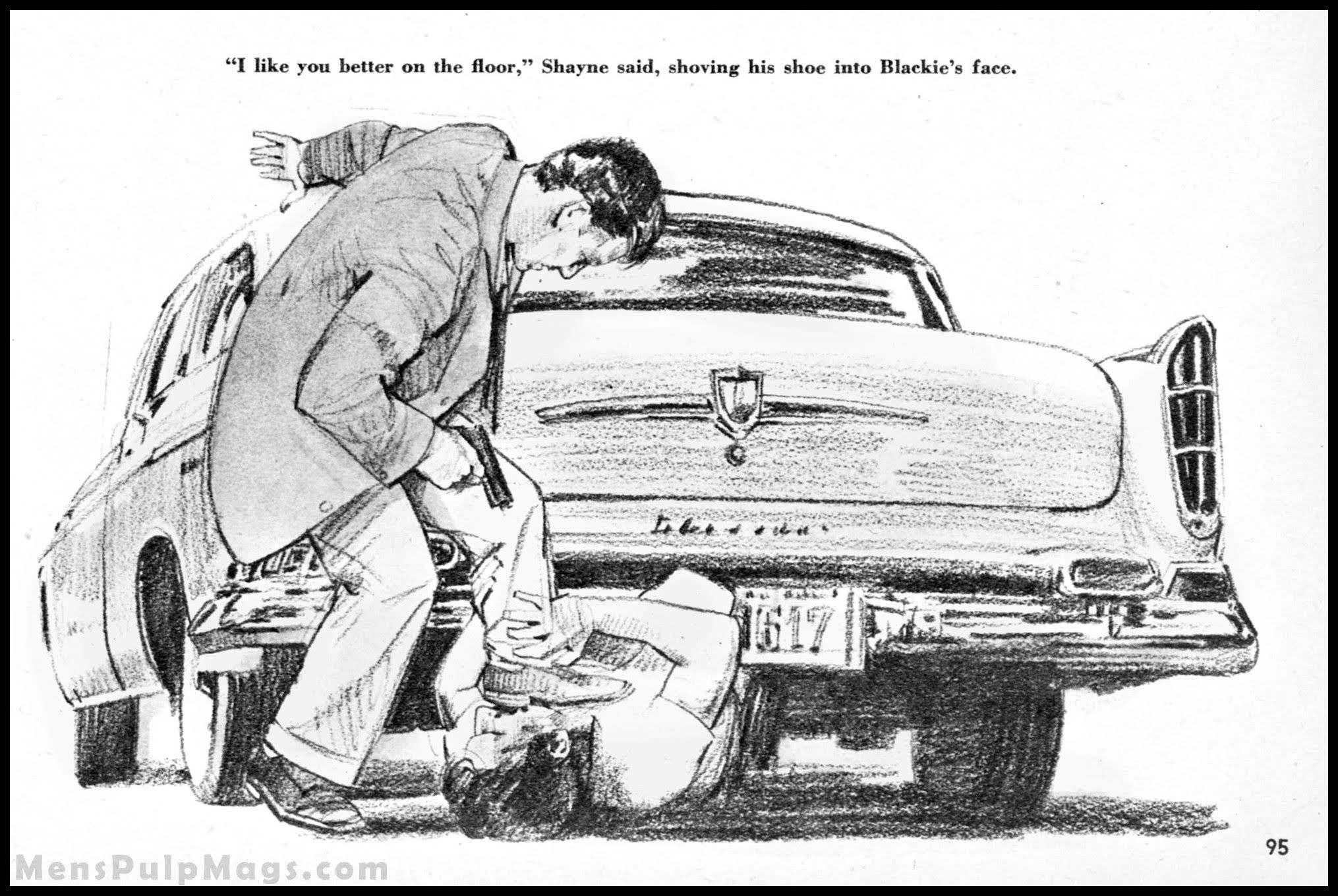 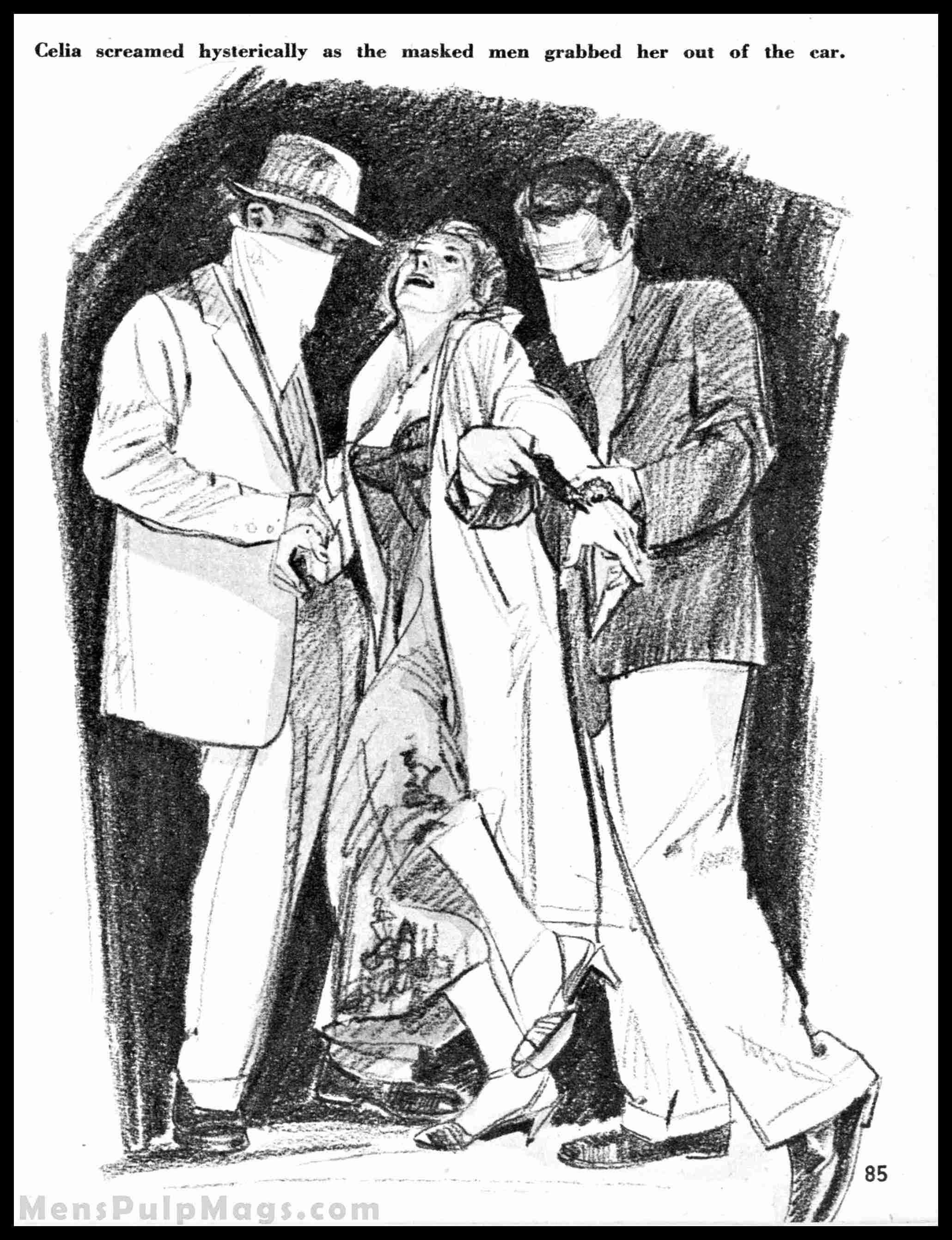 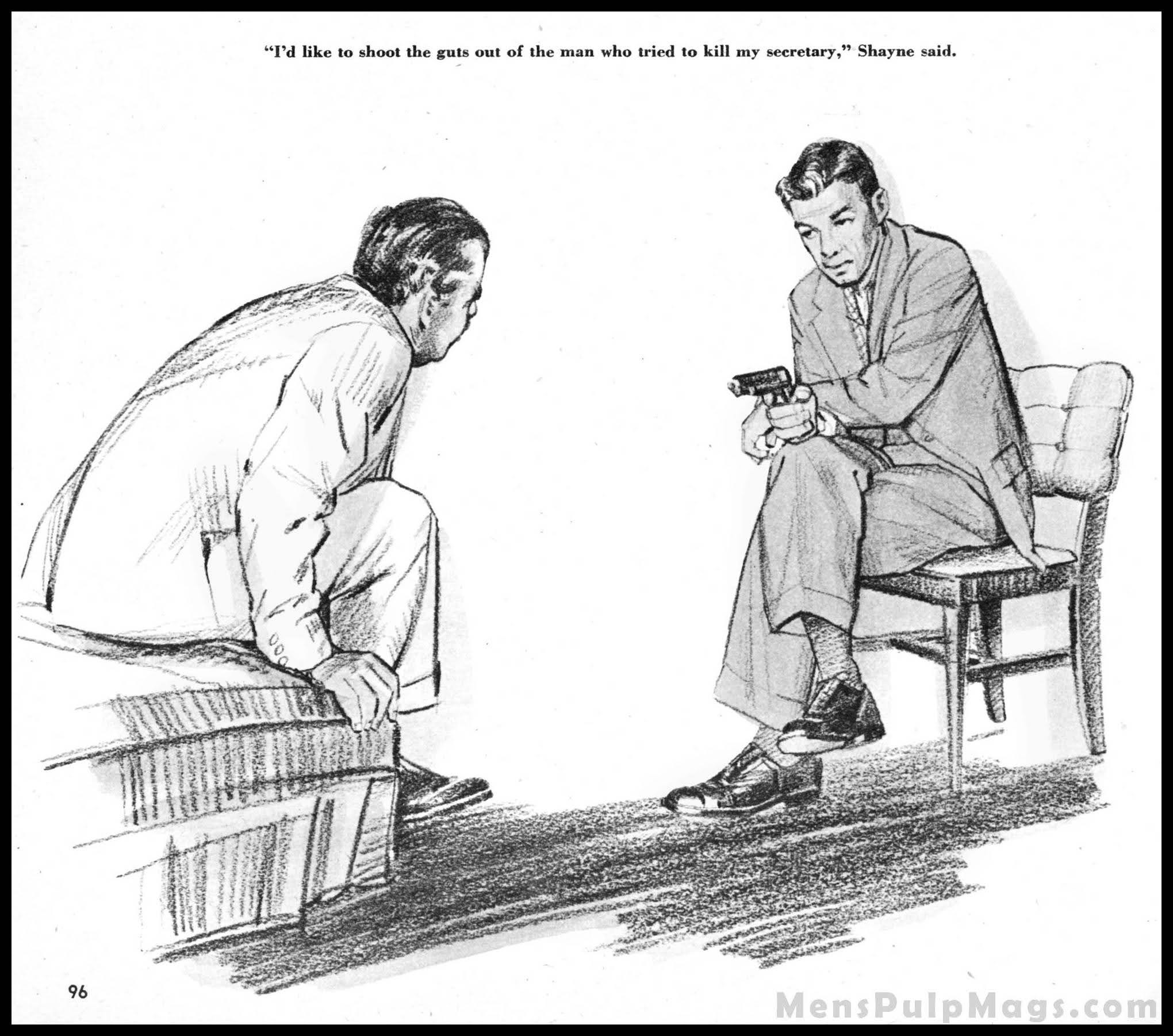 The next Mike Shayne story in a MAM I know of is “Murder in Haste” in ARGOSY, March 1961. It’s  a “Book Bonus” version of the novel of the same name that was first published in 1961, around the same time the magazine hit newsstands. The ARGOSY version features artwork by Harry Schaare.

Although he was a prolific creator of artwork for paperback covers and magazines, especially MAMs, there are amazingly few sources of information about Schaare online. One of the most notable is the page about him on American Art Archives, a terrific illustration art website maintained by my friends Thomas Clement and his wife Christiane. (Thomas and Christiane’s American Art Archives eBay store is also one of the best sources of vintage MAMs and other magazines around.)

Below is an example of a classic Schaare paperback cover, A GEM OF A MURDER (Dell, 1959) by Carlton Keith. Next to that are two of the many great MAM covers Schaare provided paintings for, ADVENTURE, December 1957, and MALE, April 1962. 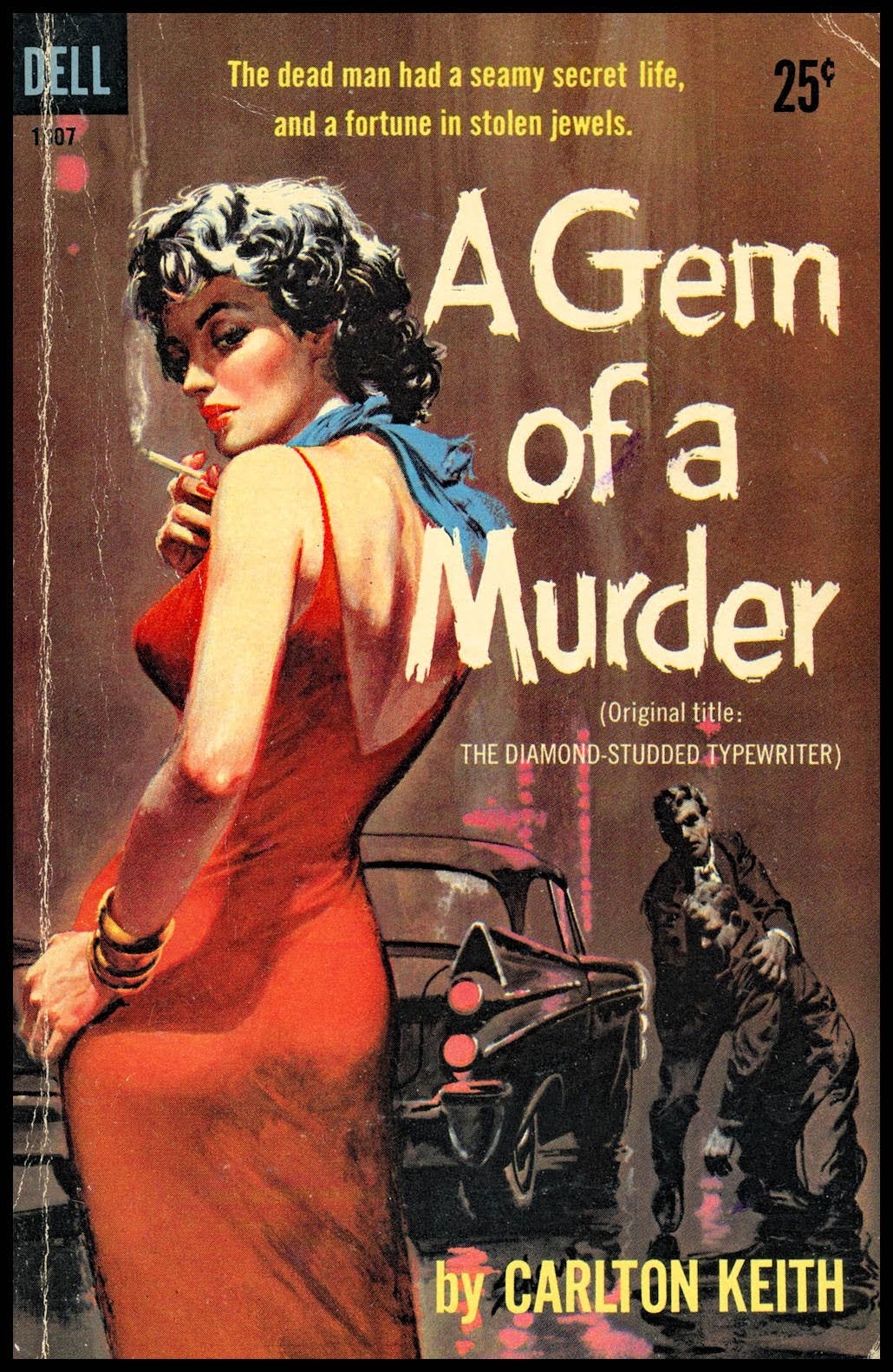 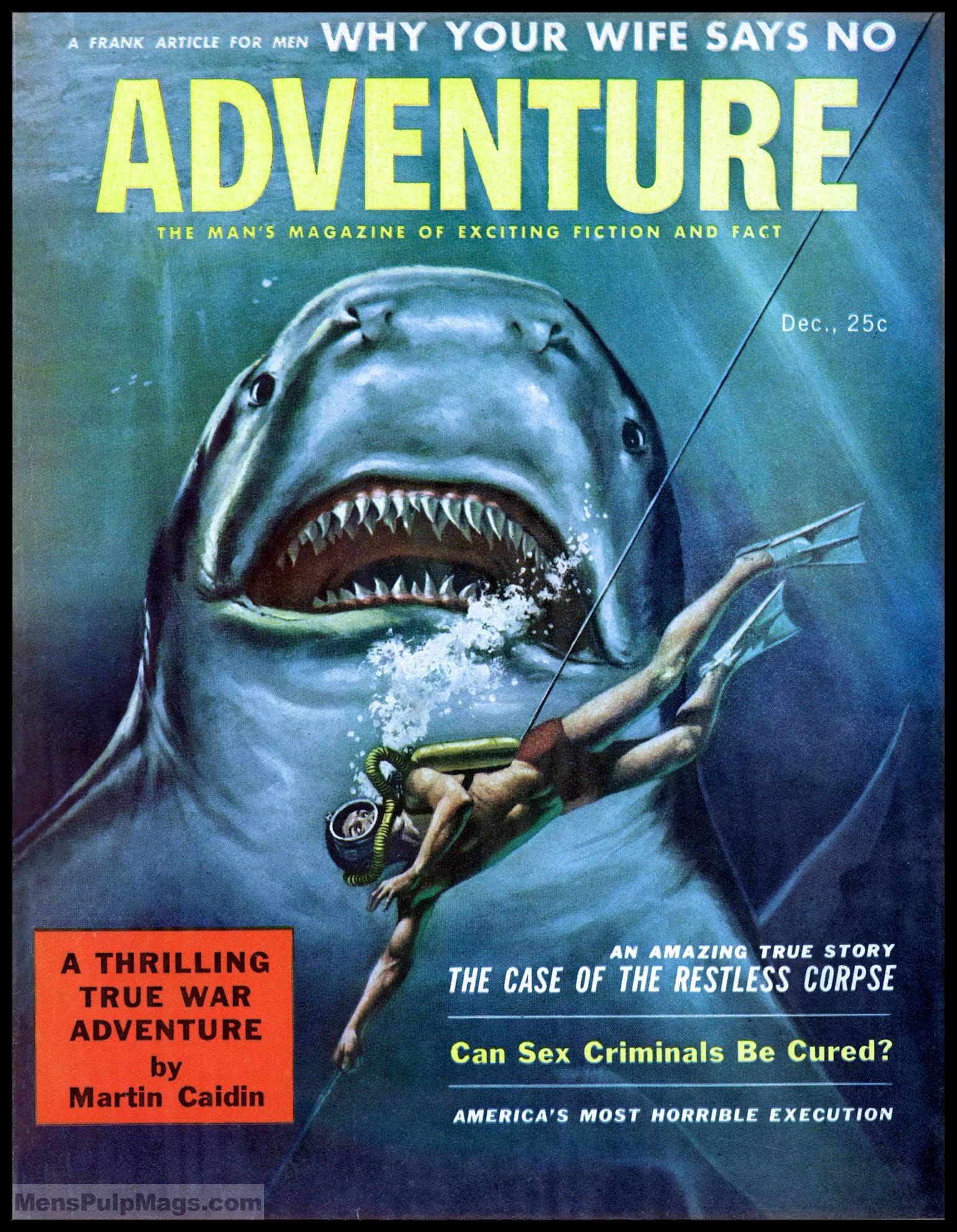 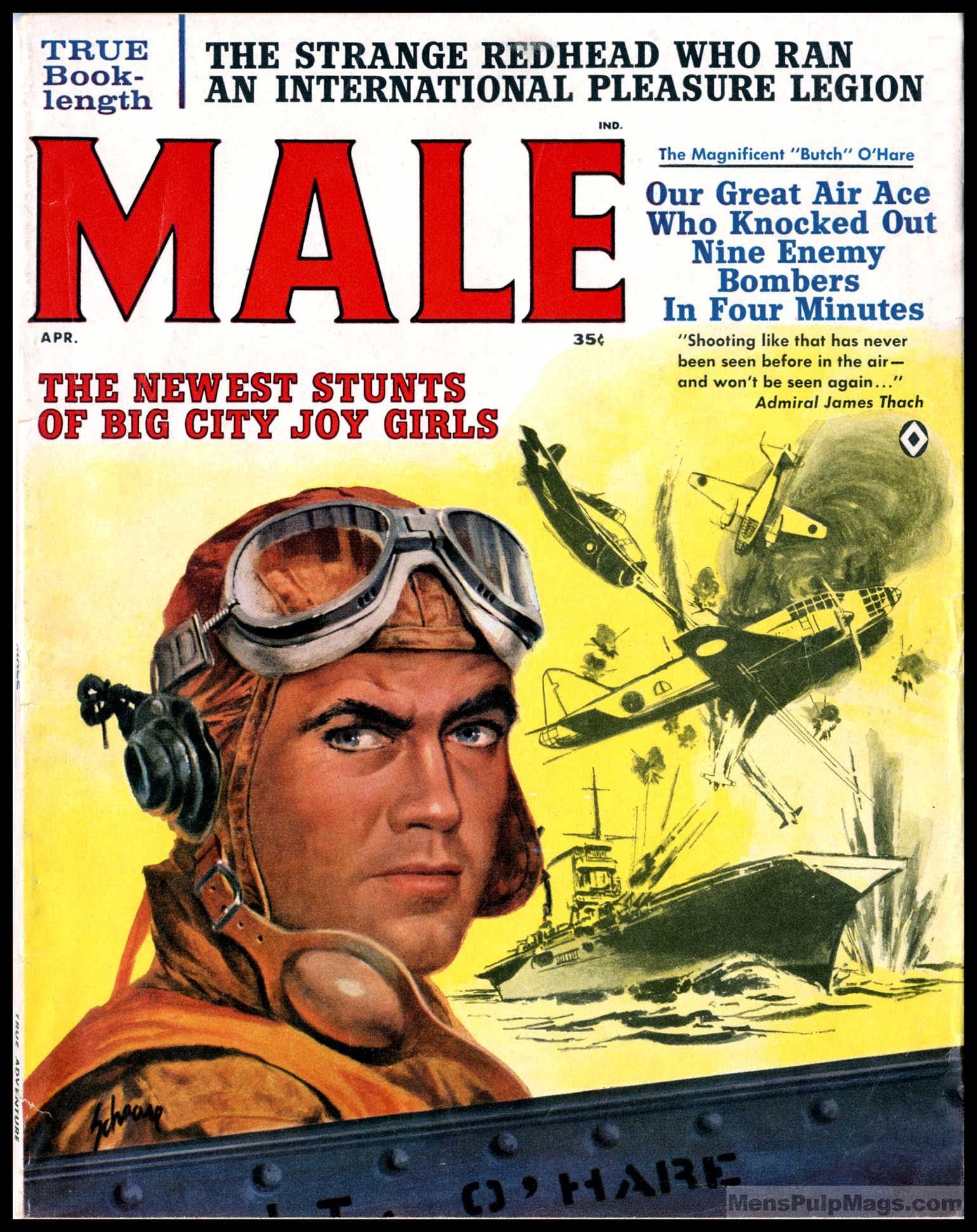 The ARGOSY version of “Murder in Haste” features a full-page page duotone painting by Schaare and 3 black-and-white spot illustrations, all shown below. 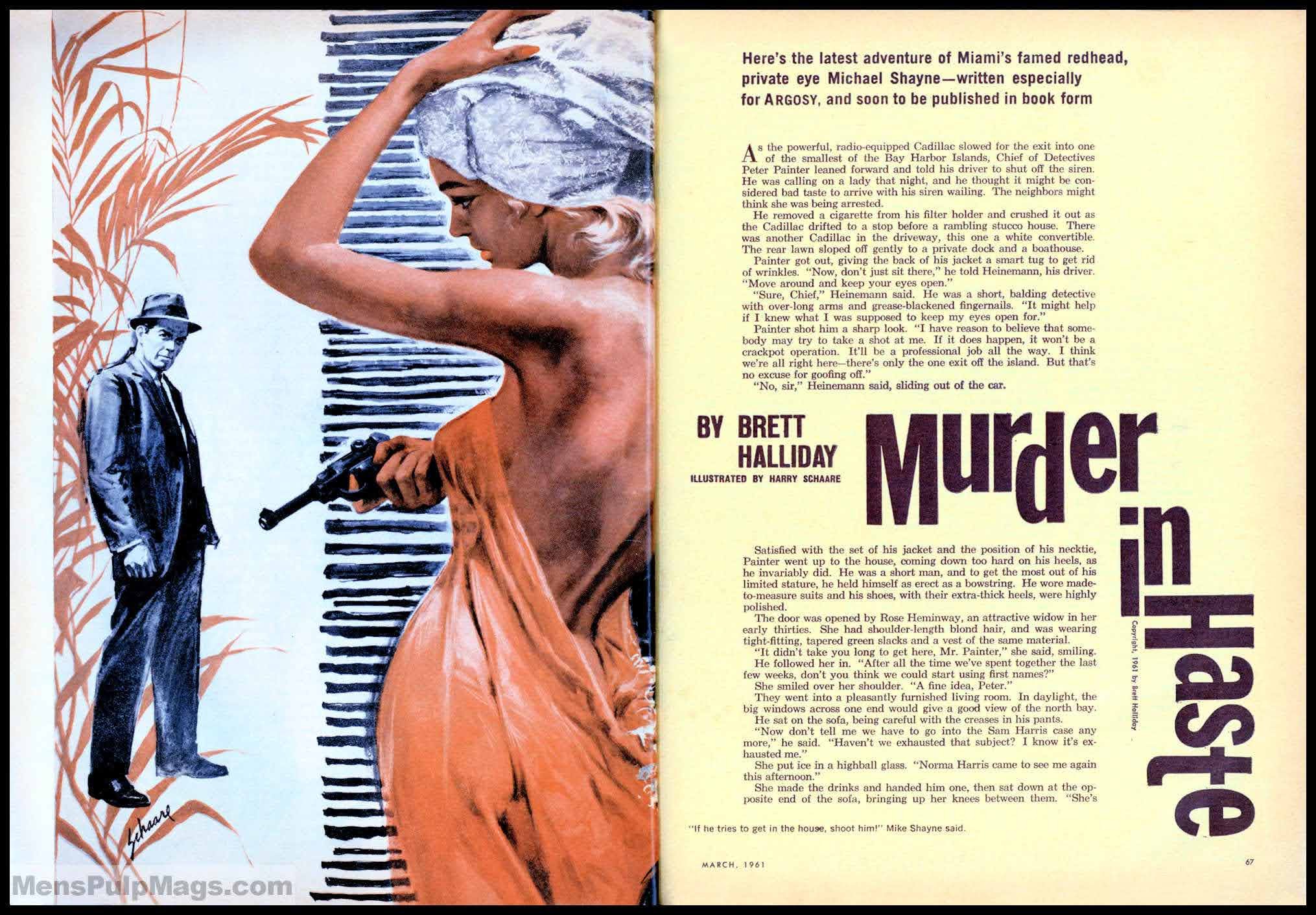 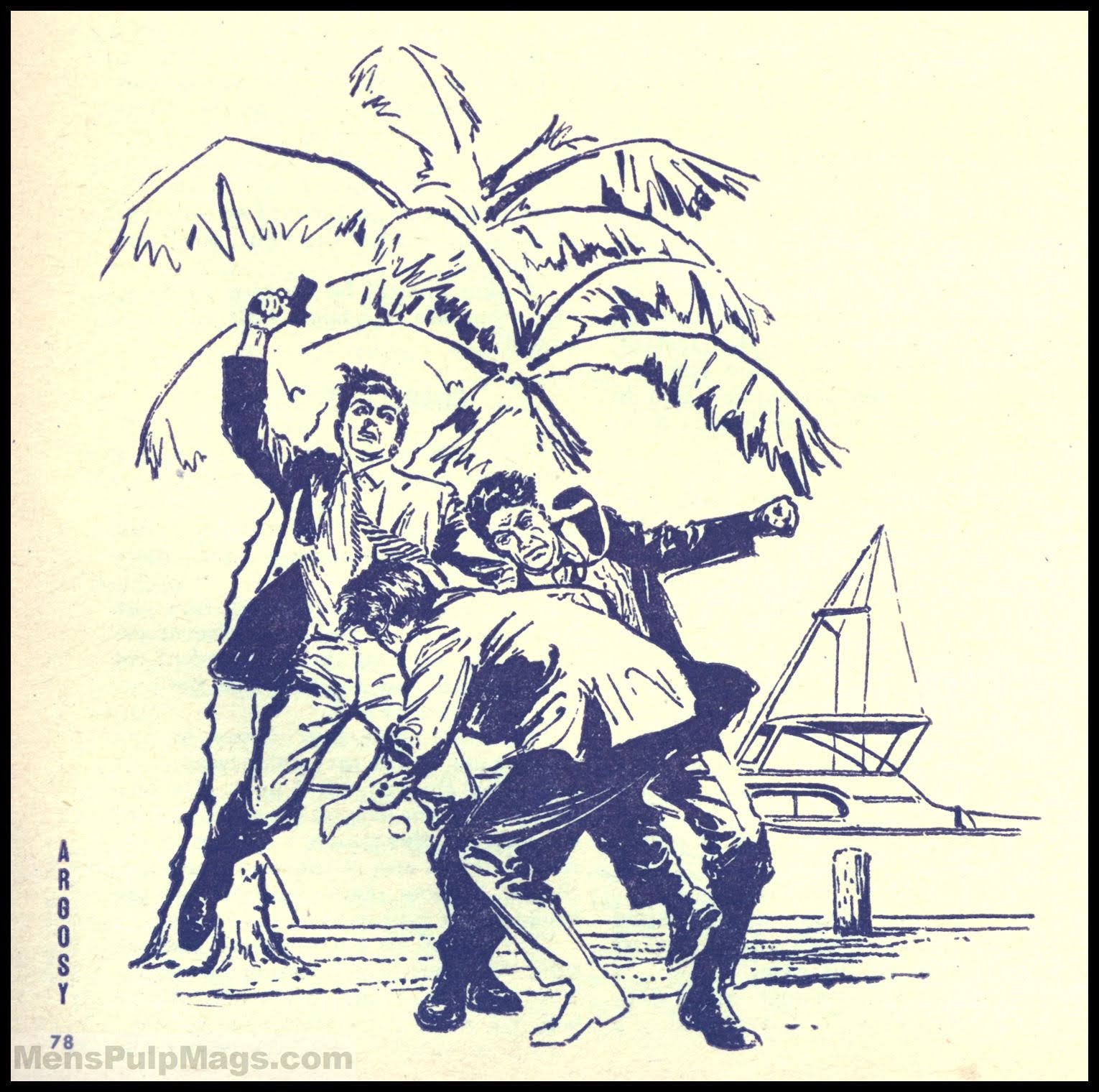 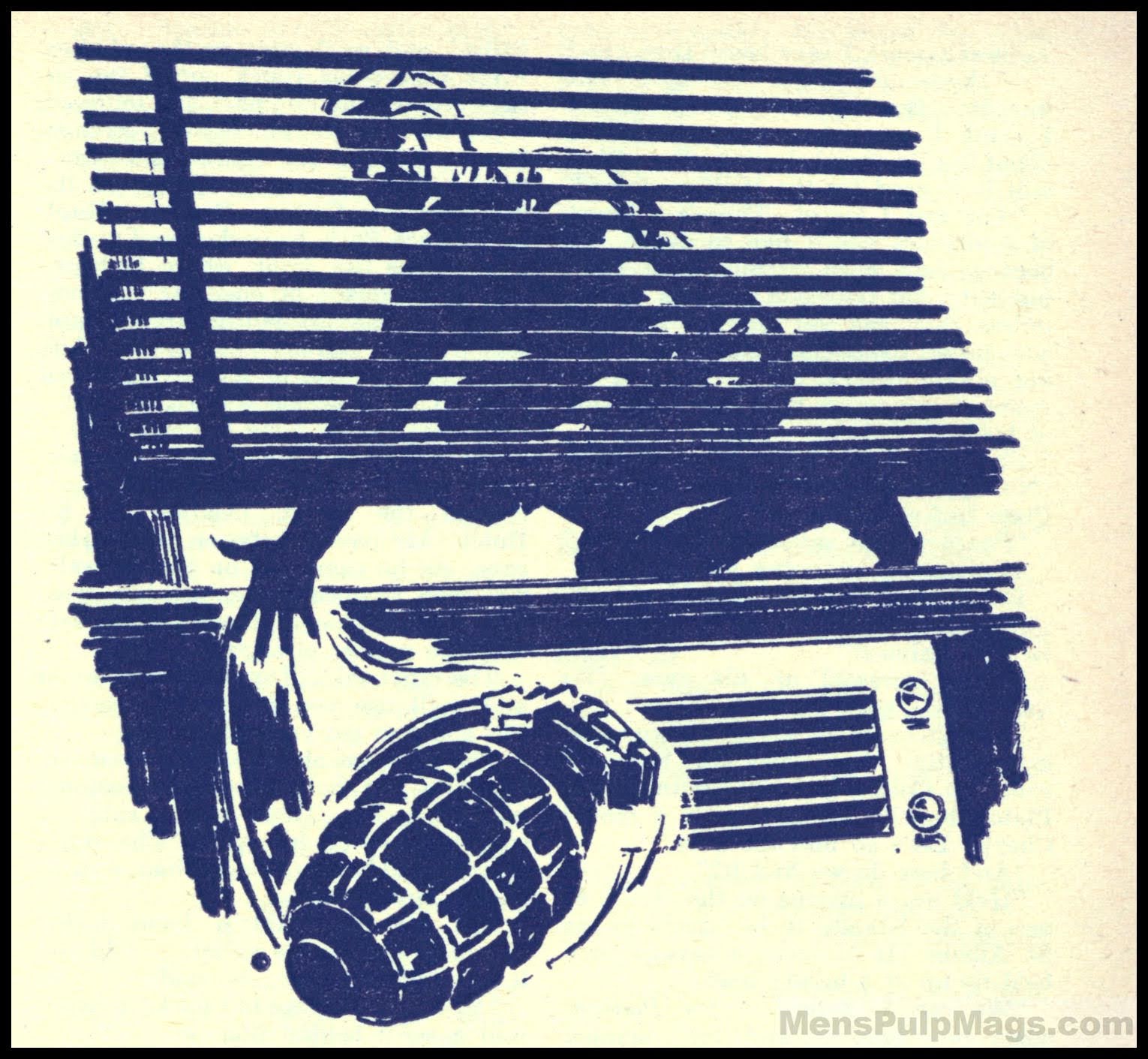 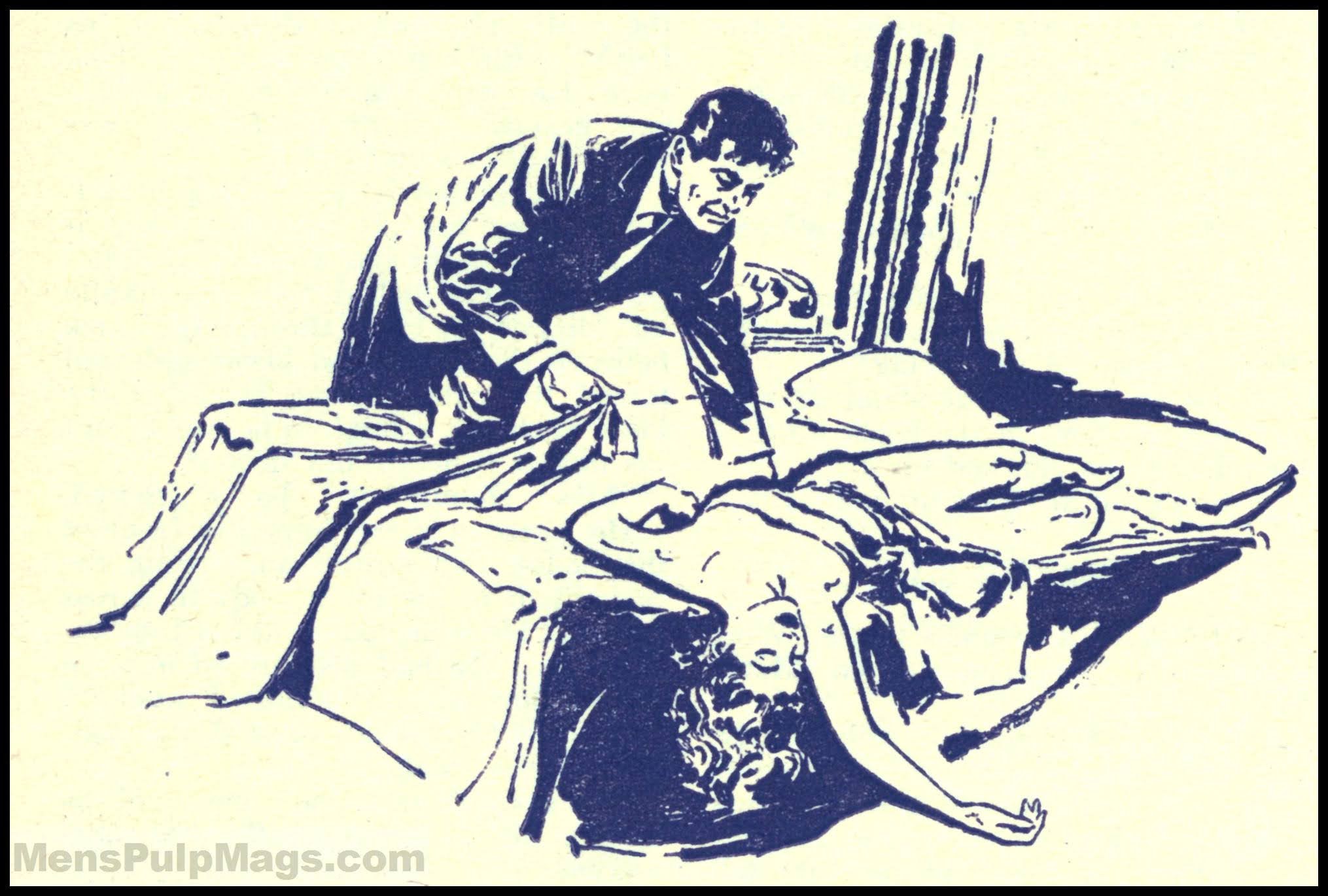 Chronologically, the next Mike Shayne story in a men’s adventure mag is “The Careless Corpse” in ARGOSY, August 1961. It’s another abridged version of a Mike Shayne novel of the same name, published the same year. ARGOSY’s version features a full-page duotone by Jack Hearne (1921-1985).

Hearne had a varied career as an artist. As noted on the Lambiek Comiclopedia website, he started out doing covers, panel drawings and inking for comics in the 1940s. He went on to do did a lot of commercial advertising artwork and magazine artwork for MAMs and mainstream mags. He also did many book cover and interior illustrations. Most memorably for some Baby Boomers, he was among the artists who did covers and interiors for the popular “juvenile” (young adult) book series, THE THREE INVESTIGATORS. That series, created by mystery and science fiction author and screenwriter Robert Arthur, Jr., was published from 1964 to 1987 and included 43 books.

When Arthur and the initial publisher, Random House, launched the series, they capitalized on the popularity of movie and TV producer/director Alfred Hitchcock by using his name as part of the series’ title, making it the “Alfred Hitchcock and Three Investigators” series. In the first 30 novels, Hitchcock is actually a character who provides an introduction and closing to each book. Although Hitchcock had little involvement in the novels, he did reserve the right to approve the cover paintings. Jack Hearne got the nod to do cover art for books #20 through #27. He also did interior illustrations for #18 through #27. His cover for #27, MYSTERY OF THE MAGIC CIRCLE is shown below, next to a full-page ad Hearne did the illustration for and an example of his early comics work. 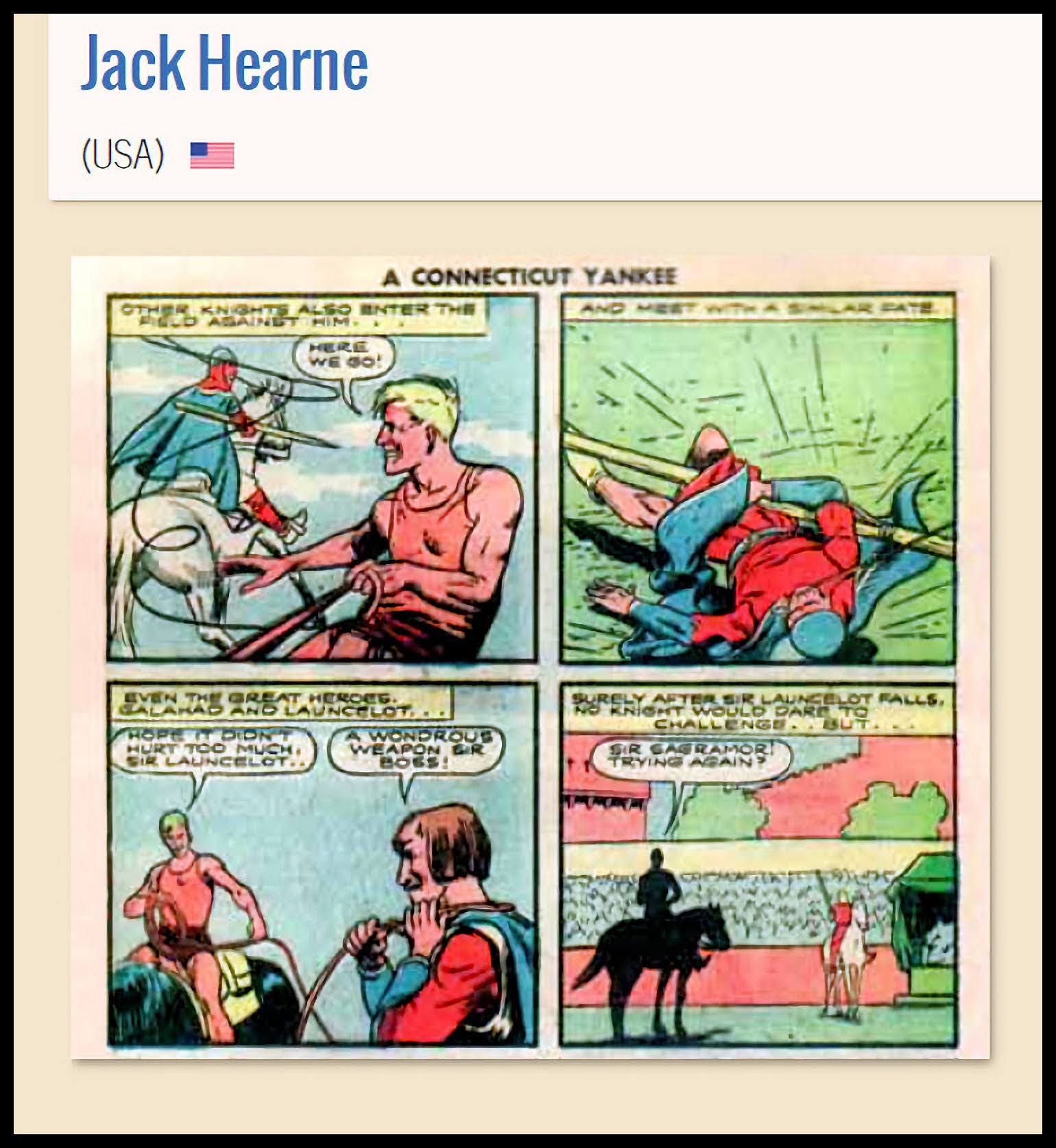 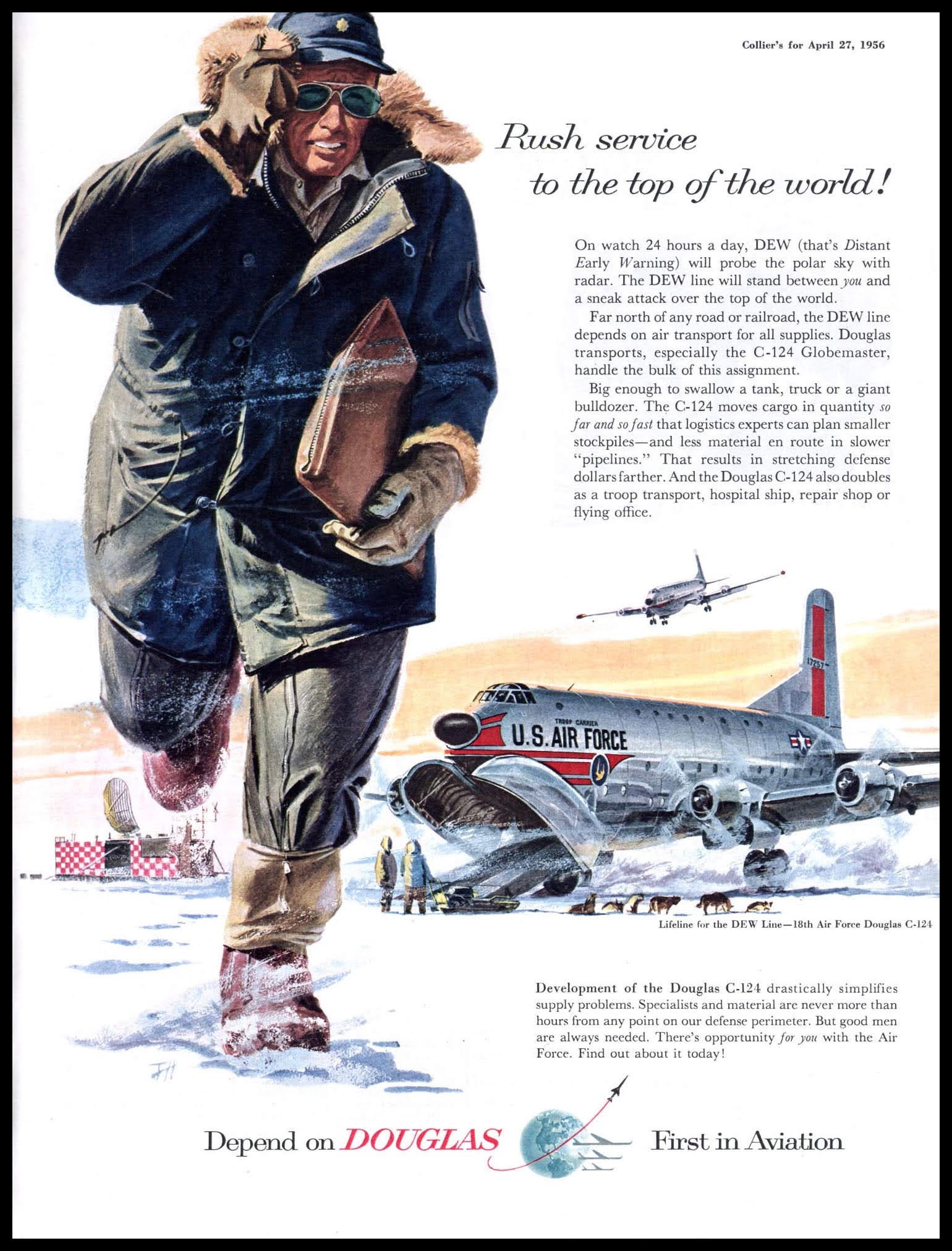 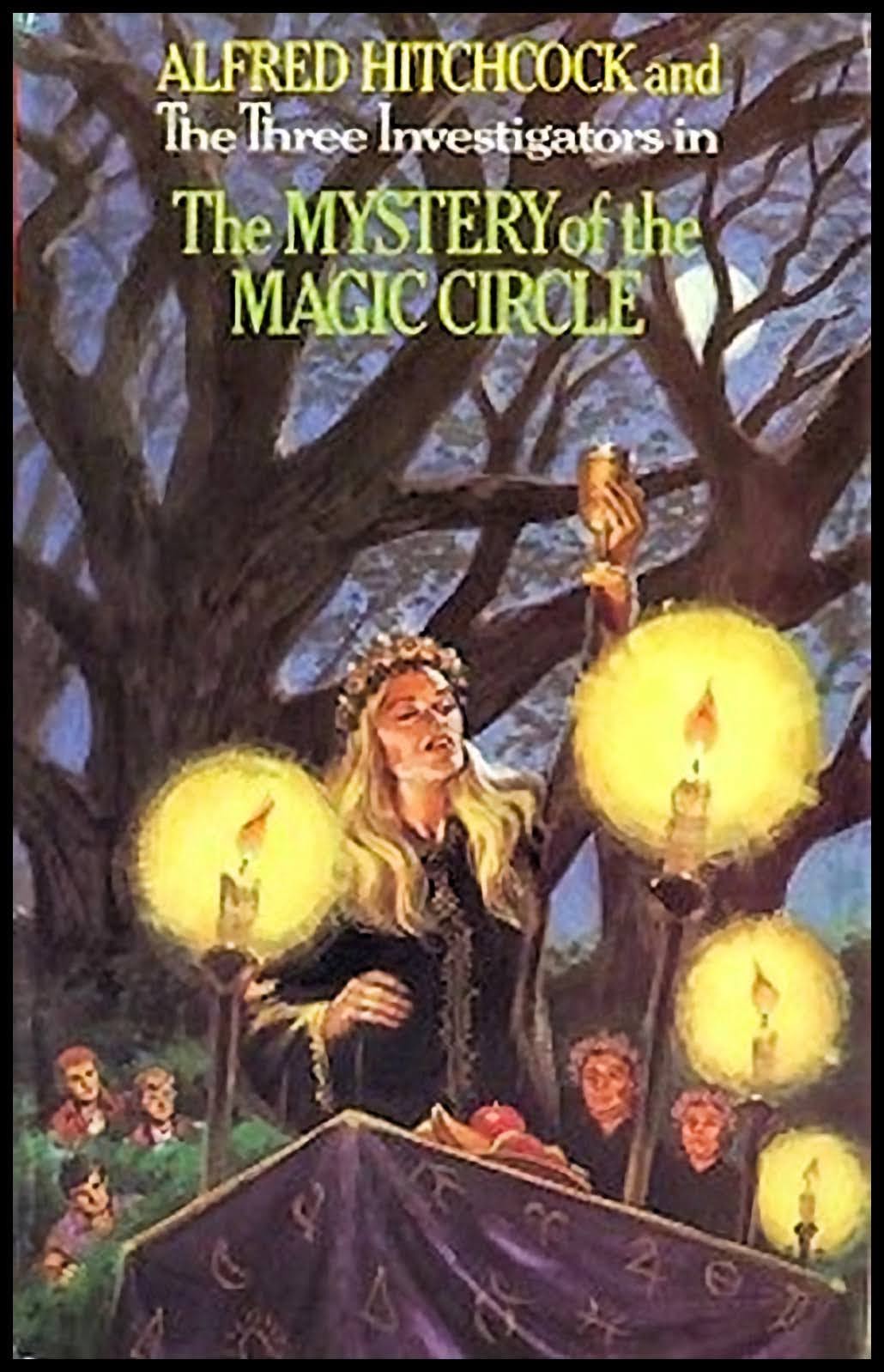 Hearne did some excellent artwork for men’s adventure magazines, primarily ARGOSY and SAGA. Below at left is a full color illustration by Hearne from ARGOSY, June 1960, for a story written by the prolific mystery and detective story writer Judson Pentecost Philips under his better-known pseudonym Hugh Pentecost.

Next to that is the initial 2-page spread for Michael Shayne story “The Careless Corpse” in ARGOSY, August 1961. It features a masterful duotone by Hearne. 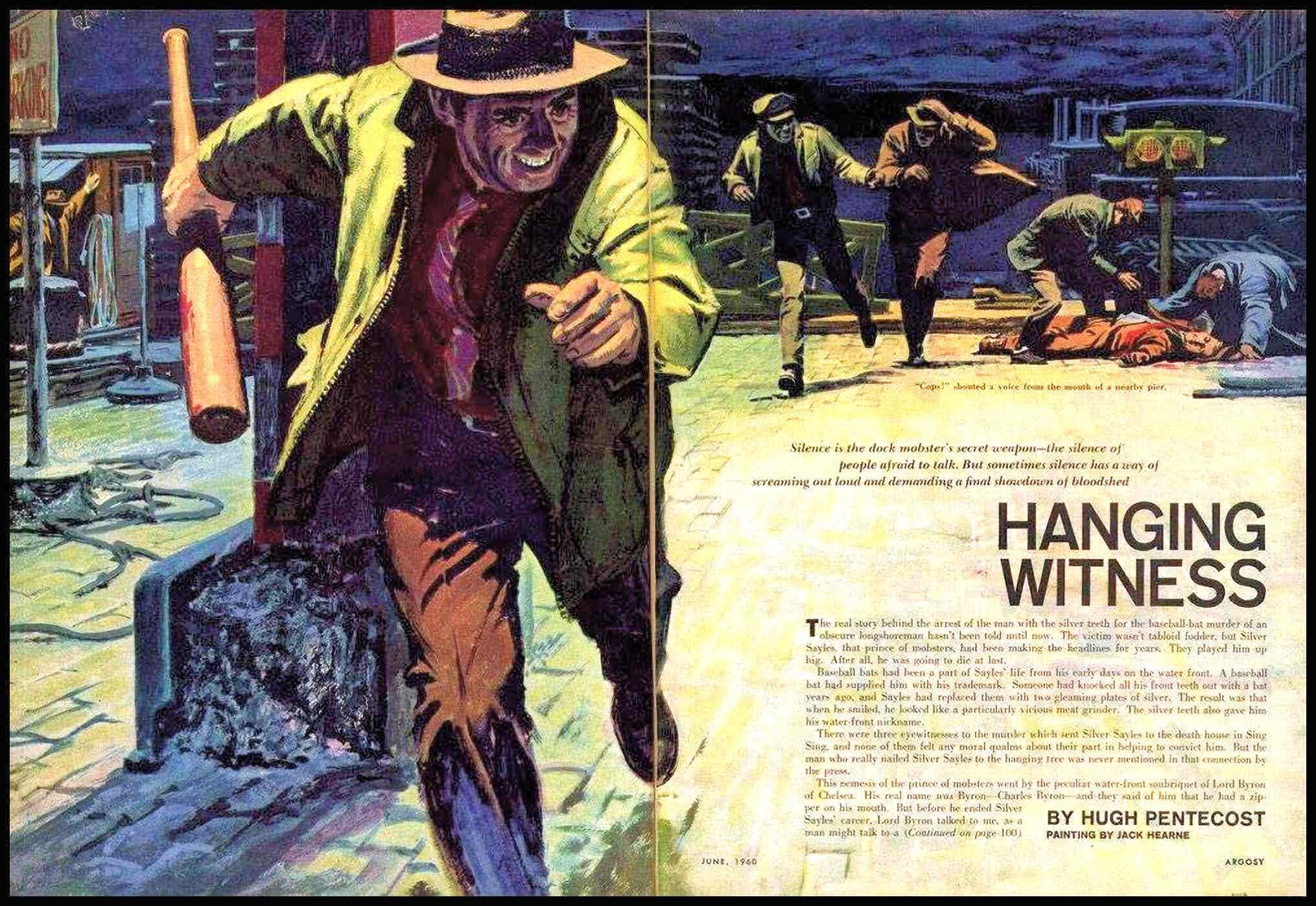 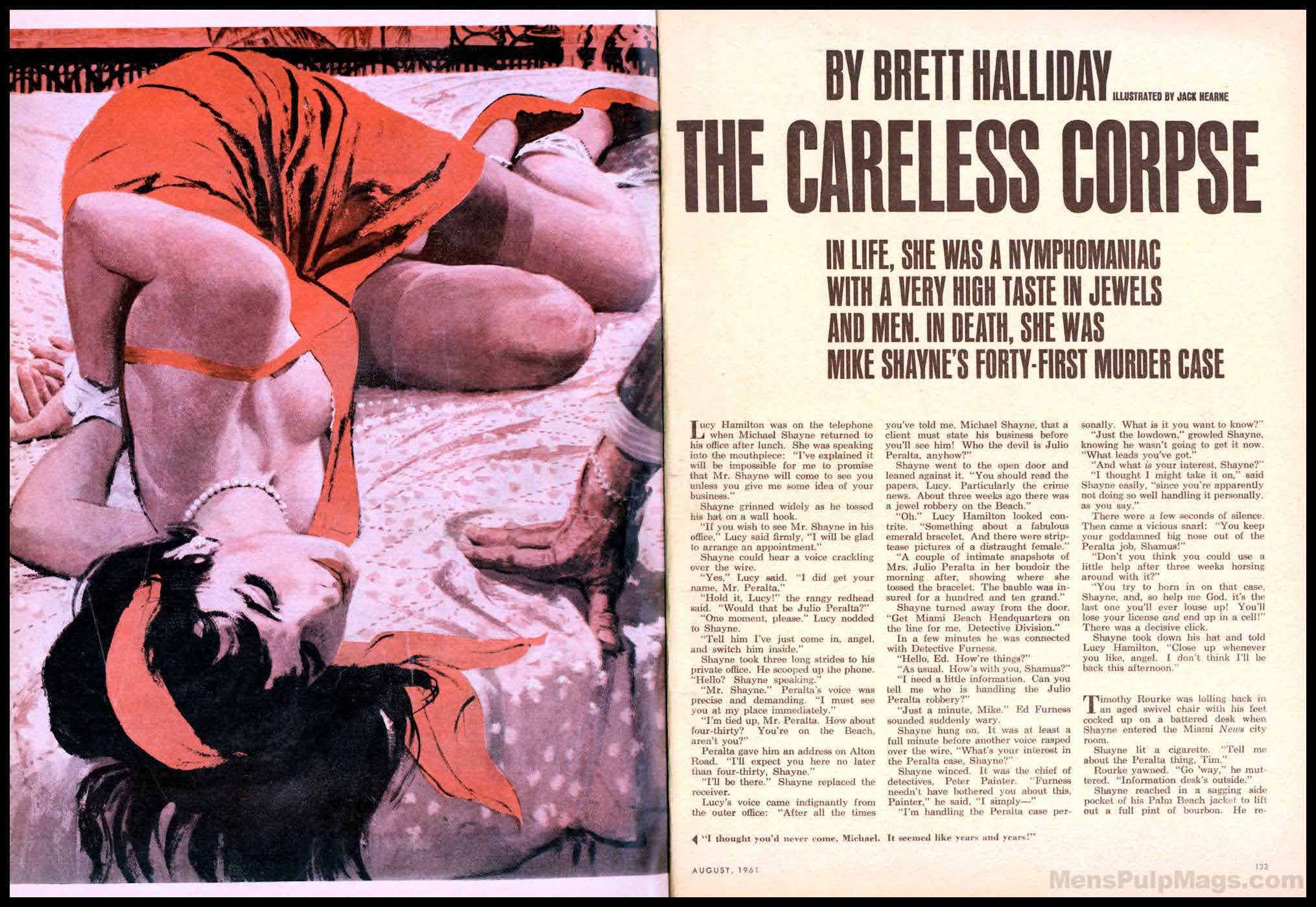 Between 1961 and 1971, ARGOSY published 10 more Mike Shayne stories. The next one after “The Careless Corpse” is “Payoff in Blood” in ARGOSY, January 1962. That’s a “Book Bonus” version of the 1962 Shayne novel that has the name spelled with a hyphen, as PAY-OFF IN BLOOD.

ARGOSY’S version features an illustration by an artist who has an especially notable connection to the Mike Shayne novels and is one of the towering figures in the realm of illustration art — Robert McGinnis. More about him and the rest of Mike Shayne’s appearances in men’s adventure magazines in my next post.

By the way, in case you wondered, the full color portrait of Mike Shayne used in the graphic at the top of this post is by artist Uldis Klavins. It was used in his illustration for the Mike Shayne story “Count Downward to Zero” in ARGOSY, April 1971, which I’ll also write about in a future post.