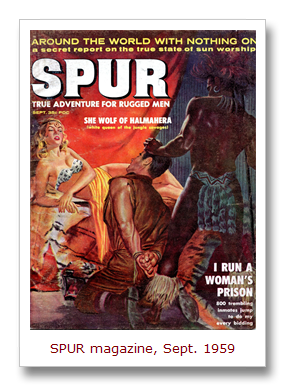 From 1956 to 1961, a men’s adventure magazine titled Rugged Men was published by Stanley Publications, Inc., one of the magazine companies owned by former comics publisher Stanley Morse.

In 1959, perhaps as a marketing experiment, the title was temporarily changed.

That year, it was published under the provocative name Spur, with the subtitle “TRUE ADVENTURE FOR RUGGED MEN.”

Only four or five issues of Spur were published before the magazine went back to being called Rugged Men.

Today, copies of Spur are relatively hard to find and often pricey when you can find them.

But they are indeed worth finding — if you’re into campy retro stuff.

For example, the September 1959 issue of Spur (Vol. 2, No. 8) features a great cover painting that combines elements of several iconic men’s pulp mag themes: exotic adventure, a “white queen of the jungle” and male bondage — with a hint of torture or sex to come (or both).

No artist credit is given for this cover painting on the contents page.

However, it goes with the “white queen” story inside titled “THE SHE-WOLF OF HALMAHERA” and the interior illustrations for that story are credited to Paul Gorenson, who I believe is probably the Canadian illustrator Paul Goranson (1911-2002). 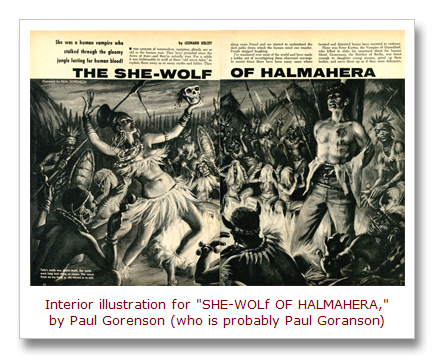 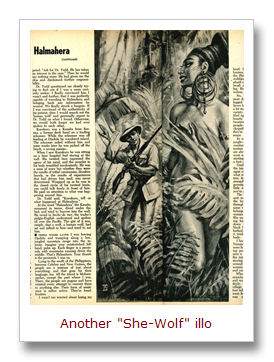 Some of the other “true adventure” stories in this issue of Spur also have cool vintage illustration art, such as “The Spanish Prisoner and the Crooked Doll” and “I RAN A WOMAN’S PRISON.” (Credited to artists Bill Smith and Charles Oberman respectively.) 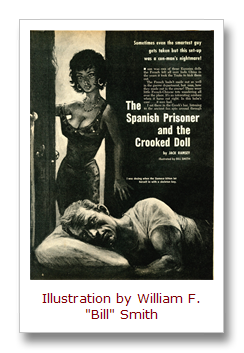 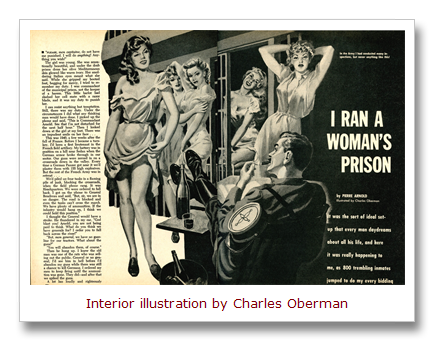 There’s also a nice cheesecake photo spread featuring Madeline Castle, a popular pinup model in the Fifties and early Sixties era who was the Playboy “Playmate of the Month” in October 1954. 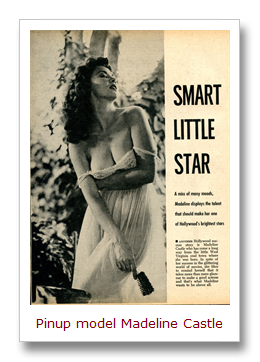 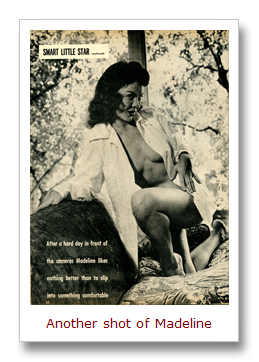 But there’s a story in the September 1959 issue of Spur that made me smile even more than I did when I saw Madeline.

It’s a classic Reefer Madness-style photo essay and exposé about marijuana with the colorful title “GANGI: Hell Smoke of the Caribbean.”

The text in this story says the events shown took place in an unnamed country in Central America, where they call marijuana “gangi” (apparently a variation of the Jamaican term “ganja”).

According to author and photographer Charles Mason, this is a killer weed in more ways than one.

“It’s not just that it’s habit-forming,” he says, “or that in the long run it will kill you. It’s that the need for it becomes so great that an addict will do anything just to get some. And by anything, I mean anything, up to and including murder.”

Here, along with scans of each page and some close-ups of the photos, is the “shocking” story of…

GANGI: Hell Smoke of the Caribbean!!!

Their name is Gangi, ours is marijuana. 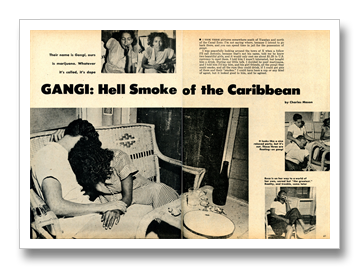 Text and photos by Charles Mason

I TOOK THESE pictures somewhere south of Yucatan and north of the Canal Zone.

I’m not saying where, because I intend to go back there, and you can spend time in jail for the possession of gangi. 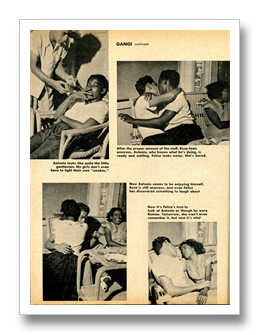 I was peacefully looking around the town of X when a fellow I’ll call Antonio, because that’s not his name, told me he knew two beautiful girls, and it would only cost me about $1.25 in U.S. currency to meet them.

I told him I wasn’t interested, but bought him a drink. During our little talk.

I decided he used marijuana, and I told him I’d buy him, and his girl friends, all the gangi they could smoke, and all the rum they could drink, if I could get pics of them and their “smokes.” 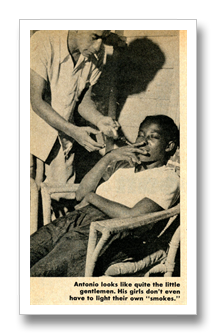 I could have been a cop or any kind of agent, but it looked good to him, and he agreed.

I was introduced to the two girls, whom we’ll call Rosa and Felice (for the same reason we named their friend Antonio), and they got down to business.

Anyone but a dope addict would have been insulted that I preferred photography to their charms. 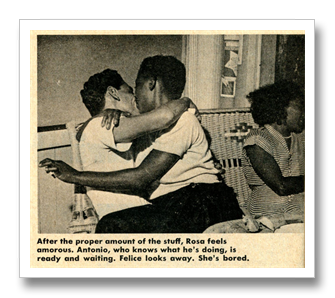 But these girls were too far gone to have any normal female pride. All they wanted was their gangi, and that, of course, is its greatest danger.

It’s not just that it’s habit-forming, or that in the long run it will kill you.

It’s that the need for it becomes so great that an addict will do anything just to get some. And by anything, I mean anything, up to and including murder. Theft, to get money for gangi, is not at all unusual.

Marijuana, or gangi, is a common weed. It grows almost anywhere in the tropics, and does well on vacant lots in Los Angeles, Chicago and New York. 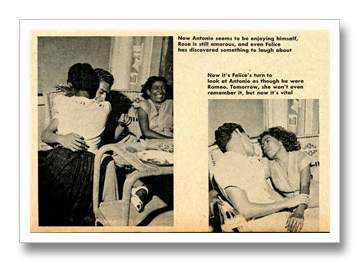 It’s hard enough for the narcotics people to try to stamp out cocaine derivitives which have to be imported, but it’s almost impossible to stop the use of a domestic weed like marijuana. 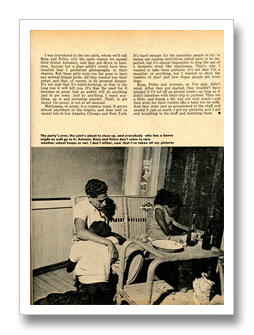 That’s why I wanted to take these pictures. It’s not that I’m a moralist, or anything, but I wanted to show the readers of Spur just how dopey people get from dope.

After they got started, they wouldn’t have minded if I’d set off an atomic bomb — as long as it didn’t interfere with their trip to joyland.

They ate a little, and drank a bit, but not very much — and then went for their reefers like a baby for its milk.

And they were just as accustomed to the stuff and needed it just as much. I got my pictures, and I got sick breathing in the stuff and watching them.  ■