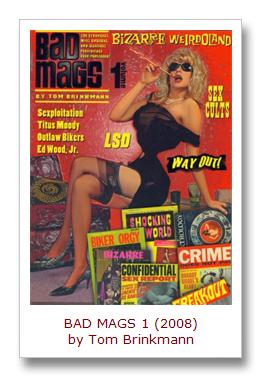 Vintage men’s adventure magazines were pretty wild compared to the mainstream magazines published during the 1950s, 1950s and 1970s.

Some were deemed to be “pornography,” which forced them to be sold “under the counter” and meant they could be denied mailing permits by Postal Service bureaucrats. (See my previous post about Gusto magazine.)

However, there were other types of magazines published during Fifties, Sixties and Seventies that were wilder than the men’s pulp mags. 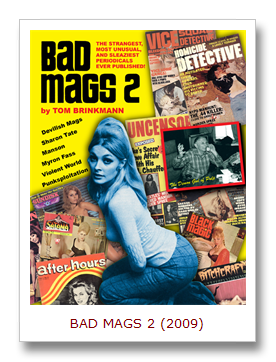 Those are the ones writer and artist Tom Brinkmann is particularly knowledgeable about.

Brinkmann has compiled a portion of his encyclopedic knowledge in two books that I heartily recommend: BAD MAGS 1 and BAD MAGS 2.

Brinkmann also maintains the excellent BAD MAGS website. And, on top of that, he’s a talented artist and the co-author and publisher of a long list of underground “comix” and zines. 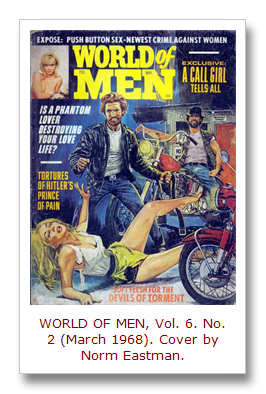 In his BAD MAGS books and on his website, he sorts the magazines he features into categories by topic and publisher.

Several of his categories include covers and interior spreads from men’s adventure magazines.

For example, one of the sections in BAD MAGS 1 and on his website is Outlaw Riders (Hell’s Angels and other motorcycle gangs). In that, Brinkmann includes a classic WORLD OF MEN cover (March 1968), with a painting by the legendary pulp artist Norm Eastman.

WORLD OF MEN was one of the risqué men’s pulp magazines published by B.R. “Bud” Ampolsk and Maurice Rosenfield (spelled Rosenfeld by some sources), owners of the Reese and EmTee publishing companies.

The Reese and Emtee mags — which include MAN’S BOOK, MAN’S EPIC, MAN’S STORY, MEN TODAY, NEW MAN, REAL COMBAT and WORLD OF MEN — are especially famous/infamous for their Nazi bondage and torture covers, most of which were painted by Eastman. But they also featured quite a few BDSM-flavored covers that used motorcycle gangs, juvenile delinquents and hippies as the bad guys who were threatening or torturing the damsels in distress, instead of Nazis.

Below I’ve posted some covers from other sections of Brinkmann’s BAD MAGS books and website. (BTW, these are actually among the milder covers. Buy the BAD MAGS books or go to the website to see the raunchier ones.) 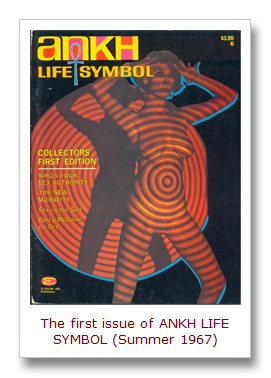 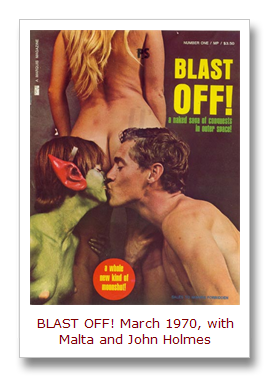 Here are a couple of covers from magazines Brinkman features in his section about the pulpy sex and sleaze stories written by “Edw. D. Wood, Jr.” And, yes, it is very same late, great Ed Wood who directed those Grade Z film classics like Plan 9 from Outer Space. The magazines WEIRD SEX TALES and HORROR SEX TALES are just two of the many outré adult mags that published stories by Wood in the 1960s and 1970s. 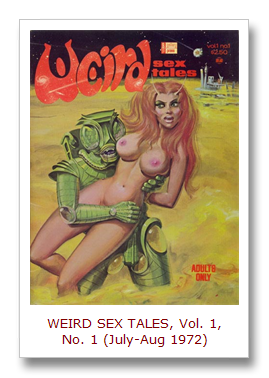 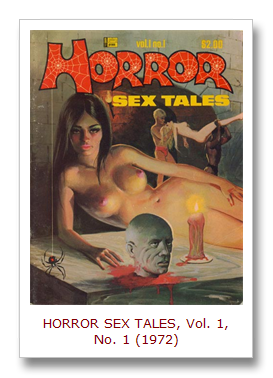 Next are covers from two of the magazines included in Brinkmann’s Sexploitation Film Slicks section. The first, CINEMA SIZZLERS, features a still from the Russ Meyer cult film Faster, Pussycat! Kill! Kill! (That’s star Tura Satana on the cover.)

Next to that is the cover of the premiere issue of the ADAM FILM QUARTERLY, an offshoot of ADAM magazine, the men’s bachelor slick. (Play those big ass bongos, man, the topless hippie chick is diggin’ it!) 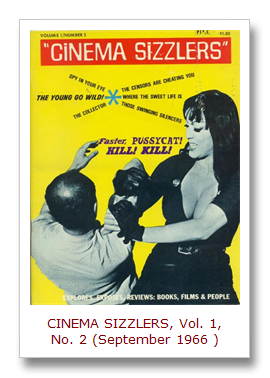 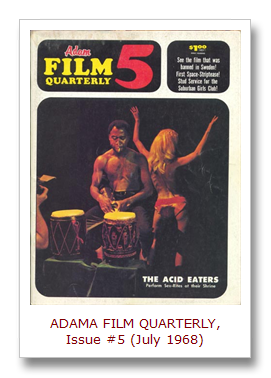 Brinkmann’s Occult Sex section includes the highly collectible April 1957 issue of SATAN magazine shown below, with my favorite vintage pinup model Bettie Page on the cover. The cover next to Bettie features the photo Brinkmann used for the cover of BAD MAGS 1. It’s a shot of model Mona Evertsen, from the the fall 1966 issue of the quarterly magazine BLACK MAGIC. 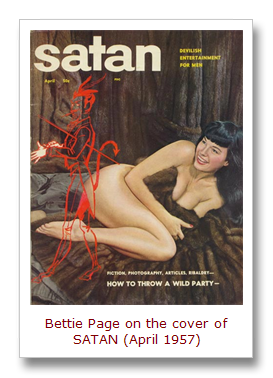 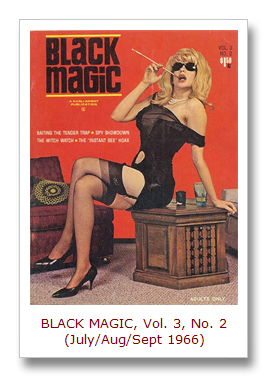 Brinkmann’s Violent World section includes a number of interesting “true crime” and detective magazines and shock tabloids. But my favorite covers are the painted covers of the magazine CRIME DOES NOT PAY (done by an uncredited artist). CRIME DOES NOT PAY is one of the many magazines published by the legendary pulp sleaze publishing entrepreneur Myron Fass. 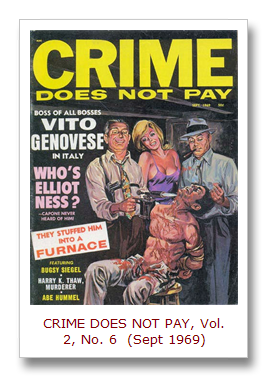 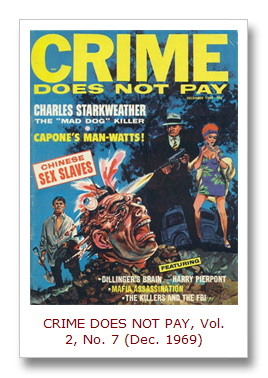 Some of the CRIME DOES NOT PAY cover paintings remind me of classic bondage and torture covers common on men’s pulp magazines, especially the two below. 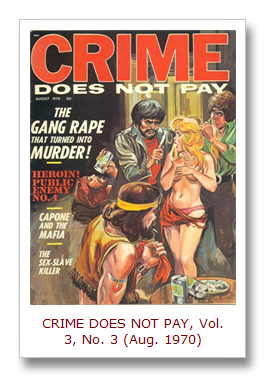 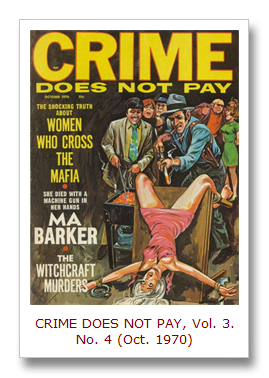 There are hundreds of other cool cover scans, photos, interior spreads and vintage ads in Tom Brinkmann’s BAD MAGS books and on his website.

I am a big fan of his work — including his art, comics and zines. You can check some of the latter out on the Poopsheet Shop comics and art site. Here are a couple of smashing examples of Brinkmann’s artwork… 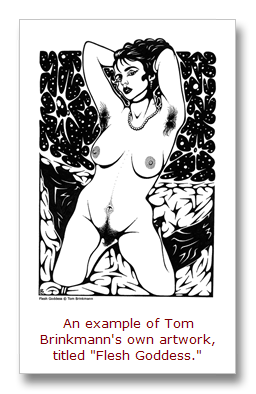 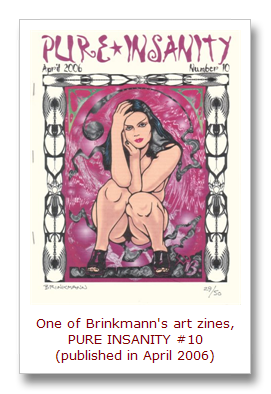 At some point, I hope to get an interview with Tom Brinkmann for this website. For now, I’ll just give him a tip of the hat for his talent and for the yeoman’s work he’s done researching weird and wild vintage magazines.

Kudos and thanks, Tom!