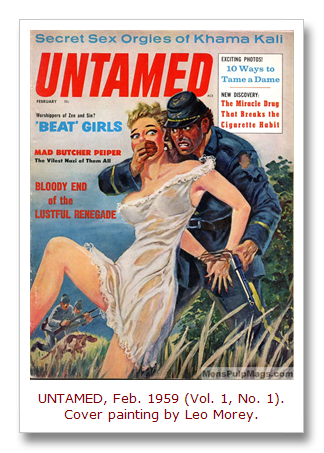 It’s one of my favorites, though it didn’t last long.

Only 8 issues of UNTAMED were published, in 1959 and 1960, by the company Magnum Publications, Inc.

They all featured wild cover paintings done by either Ed “Emsh” Emshwiller or Leo Morey, two great pulp artists who are more widely known for their science fiction magazine covers.

UNTAMED also featured some wild stories that I find highly entertaining, though probably for different reasons than originally intended.

Consider, for example, the supposedly true story about Beatniks from the February 1959 issue of UNTAMED, which uses a question as it’s title:

In this exposé-style piece, a writer named Gilbert Nash sets out to answer that question with his buddy Bob.

Gil is a New Yorker who knows some Beatniks in the city.

Gil says his friend Bob is a writer of detective novels from Bloomington, Indiana. 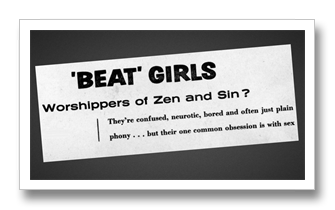 Bob tells Gil he wants “to get a close look at this Beat Generation he’d been hearing so much about, and see if he could get some idea what makes it tick.”

“I’ve read Kerouac and Ginsberg and all the so-called spokesmen for the Beats,” he confessed, his brow furrowed. “I’ve read all the books and articles I can find claiming to explain the whole thing. And frankly, all I get is more confused.”

Bob isn’t a fan of Jack Kerouac or Allen Ginsberg, or any of the other legendary Beat writers.

But he is especially intrigued by a recent article he’d read “about the kids who held plush Madison Avenue jobs on weekdays and indulged their Beatness on weekends, at ‘cool’ parties.” 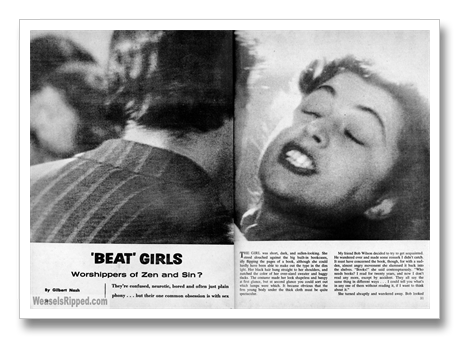 Bob says that article described how “all the girls take off their blouses and bras and walk around with nothing on top.”

With this tantalizing image in mind, Gil and Bob began their “quest for Beatness.”

During the course of the evening they go to a Beatnik party and actually do encounter one topless “Beat Girl,” plus some others who are like, really wigged out.

She’s a 21-year-old who has already bedded hundreds of guys.

Joannie, Gil tells us, “keeps track of the number of men she sleeps with and announces the running total out loud at the appropriate moment.”

The appropriate moment seems to, er, come while she’s having sex with some lucky (or possibly unlucky) guy.

“It can be pretty disconcerting,” Gil notes drily. 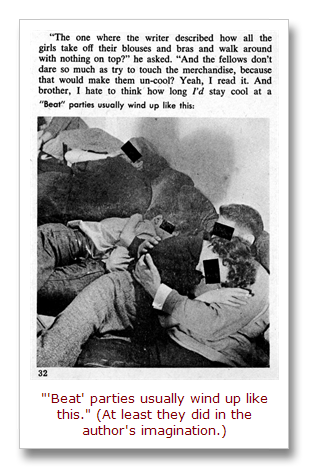 Then there’s the blonde Beat girl “who was not nude from the waist up, but might as well have been.”

Gil says of her:

“She wore a thin, faded man’s shirt, wide open at the throat and tied in a knot beneath her large breasts. There was a huge expanse of skin visible between it and her ragged shorts, which were obviously the barely surviving remains of a pair of dungarees.

She was talking in a low, steady drone. ‘Baby,’ she said. ‘Don’t tell me about the past, baby. There is no past. The past is dead. The past is dead, baby. The future isn’t here yet. Maybe there’ll be a future, maybe there won’t. We’re in between. And in between is nowhere, baby. Nowhere.”

Man-oh-man, I groove on that attempt to portray some nihilistic Beat-speak.

I also dig the story’s unintentionally funny anecdote about how Beats liked to smoke peyote:

“‘Pot’ is a word that is used loosely, like most words these Beat’ kids use,” Gil explains in the story. “But generally it means the dried leaves of the peyote cactus, which are made into cigarettes and smoked. Though the stuff has obvious narcotic effects, for some odd reason it has not been made illegal in New York yet, and lots of the kids use it to get ‘high,’ or ‘far out.’ Aldous Huxley wrote a whole book about the sensations he had when he tried it, and now uncounted young people in New York grow the plants, dry the leaves, and smoke the stuff for kicks.”

The part about Aldous Huxley has a basis in fact. It refers to his groundbreaking 1954 book The Doors of Perception.

It’s also true that peyote and the psychedelic alkaloid it contains — mescaline — were not yet illegal in most states or under federal drug laws when Gil wrote his story in 1959. 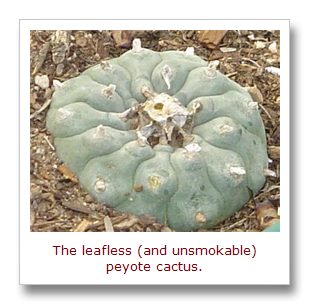 Of course, the part about growing and smoking peyote leaves is a bit hard to believe.

Peyote is a cactus plant that has no leaves. It’s typically eaten, not smoked. Indeed, I’m not sure it’s even smokable.

According to the Mystica web page about the use of peyote by American Indians and other fans: “Smoking peyote is impossible because it simply will not burn in a pipe or cigarette.”

I also seriously doubt if many people in New York were growing peyote in 1959.

And, I don’t recall ever hearing anyone refer to anything but marijuana as “pot.”

In fact, as someone who grew up in the 1950s and 1960s and who did his share of experimenting with psychotropic substances, I am pretty certain that the word “pot” was not generally used to mean peyote.

However, if (like me) you think Gil’s knowledge gap about drugs and his search for topless Beatnik babes sounds amusing, you’ll enjoy reading his “BEAT GIRLS” yarn.

It’s one of two mind-expanding, drug-related stories we included in our WEASELS RIPPED MY FLESH anthology.

The other one is an account written by a participant in early LSD experiments, titled “I WENT INSANE FOR SCIENCE.”

They’re both way out there!