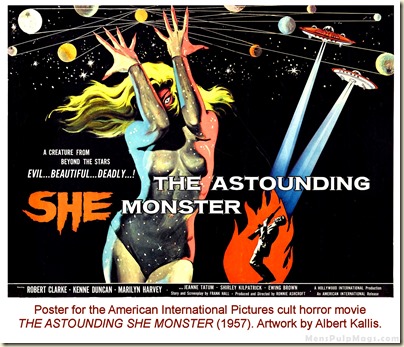 One of the things I love about collecting, reading and researching men’s pulp adventure magazines from the 1950s, 1960s and 1970s is that I never know what kinds of pop culture treasures I’ll find in them.

As noted in my previous post here, the premiere issue of WILDCAT ADVENTURES, published in June 1959, is notable for having what is probably the first men’s adventure magazine cover painting done by the great Basil Gogos.

But the cover painting is uncredited, the excerpt from JUNKIE was published under the pseudonym “William Lee,” and the Severin artwork for it is uncredited.

So I wouldn’t have known those facts without doing some research.

Recently, I decided to look into something else I saw in WILDCAT ADVENTURES #1 and got lost for hours connecting another series of dots.

It shows her in bathing suits and other modestly-revealing outfits in beachy settings, which led the editors to give the spread the, uh, clever title “SHAPE ASHORE.” 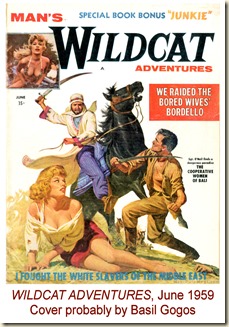 Shirley’s name didn’t immediately ring a bell with me. I had to Google her.

When I did I discovered she had some quite interesting pop culture connections and credits.

You don’t learn about any of them in the text the WILDCAT ADVENTURES editors used for Shirley’s photo spread.

Like many of the short blurbs written for photos of pinup models in men’s magazines, most of that text is totally made up.

It claims Shirley recently came to the United States from Ireland, “but she loves learning new things and is fast becoming as American as anyone.”

In fact, as documented by the Internet Movie Database and elsewhere, Shirley was born in the USA as Shirley Jean Kilpatrick on November 16, 1932. (As I write this, she is still alive.)

Two things in the photo spread text that are close to the realm of reality are that she was “much in demand as a model” and wanted to be an actress.

Shirley didn’t quite get to the top tier of glamour girl models.

In some of those photos Shirley has dark hair. In others she is blonde.

In WILDCAT ADVENTURES, June 1959, she has dark hair (described as red) and is given a full three-page spread. 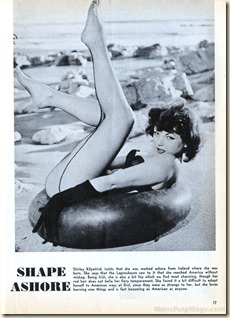 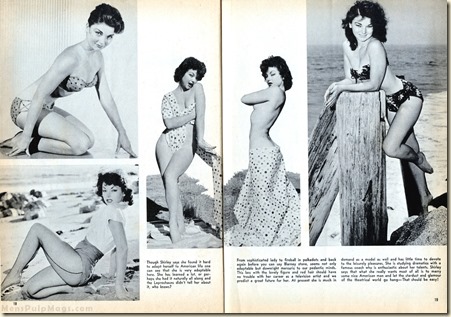 But perhaps the coolest thing about Shirley, which gives her cult cachet, is that she played the “She-Monster” in the totally gonzo Grade B (or maybe Grade Z?) horror film THE ASTOUNDING SHE MONSTER (1957).

It’s a flick that has to be seen to be disbelieved, involving a mashup of seemingly unrelated plot lines and characters.

One involves the kidnapping of a rich heiress by some third-rate, lowlife gangsters.

The other involves an alien (Shirley) who crash lands on Earth, wearing a form-fitting, glittery Spandex suit that shows off her ample curves.

Shirley’s other “alien” attributes are her eyebrows, which outdo those of STAR TREK’s Spock, plus the fact that she is radioactive and kills anyone she touches. 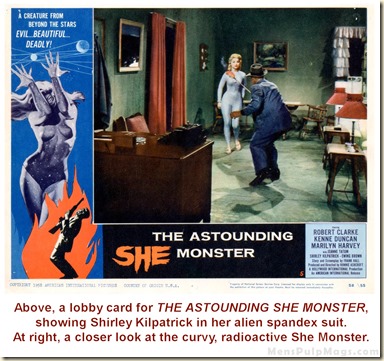 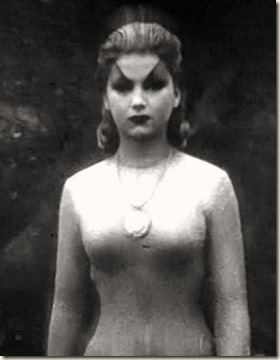 THE ASTOUNDING SHE MONSTER is one of the many classic cheesy science fiction and horror flicks released by American International Pictures (AIP).

If you watch it (it’s online here), you may notice that it has the feel of an Ed Wood film like PLAN 9 FROM OUTER SPACE. That’s not a coincidence. The director, Ronald V. Ashcroft, was a friend of Ed Wood. He also served as assistant director and sound man on some of Wood’s films. And, Ashcroft’s use of an announcer voiceover and recycled footage, and the weird plot and dialogue in THE ASTOUNDING SHE MONSTER are all very Woodesque.

Like most AIP films, THE ASTOUNDING SHE MONSTER was promoted with a poster that was, artistically, better than the movie. The painting and design were done by Albert Kallis.

AIP’s Sam Arkoff and James H. Nicholson used posters by Kallis and his colleague, the even better known artist Reynold Brown, to promote and pre-sell movies to theater owners and moviegoers before they were released – sometimes before they even went into production. If you look at the eye-popping posters by Kallis and Brown, it’s easy to see why that strategy often worked.

The poster Kallis did for THE ASTOUNDING SHE MONSTER is one of his best. It features an image of the She Monster in an alluring, dance-like pose with planets and flying saucers in the background and a small silhouette of one of her victims going up in radioactive flames at bottom right. It’s eye-grabbing and kind of proto-psychedelic. 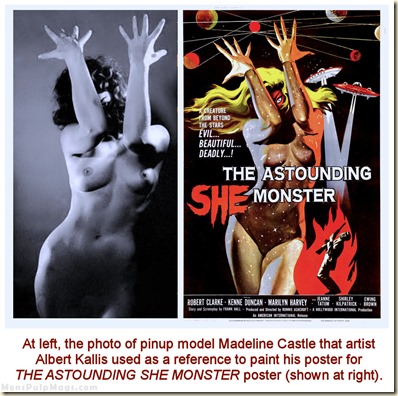 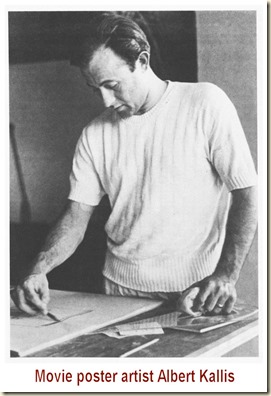 Several web pages I found about the poster noted that the model Kallis used for the She Monster was not Shirley Kilpatrick. It was another, even more popular glamour girl from the ‘50s and ‘60s, Madeline Castle. One post, on the blog of artist Steven Derrick, shows the nude photograph of Castle that Kallis used for reference. I don’t know if Kallis took the photo or got it from a magazine, but it’s a real stunner.

Castle was PLAYBOY magazine’s “Miss October” in 1954. Photos of her appeared in scores of other bachelor mags and in men’s adventure magazines.

According to a post on the excellent Monster Brains blog and an article it shows from the March 1988 issue of CINEFANTASTIQUE magazine, Kallis worked as the Art Director for American International Pictures for 17 years.

During that time he created memorable posters for many AIP movies, including: I WAS A TEENAGE FRANKENSTEIN, ATTACK OF THE CRAB MONSTERS, INVASION OF THE SAUCER MEN, NOT OF THIS EARTH, THE SPIDER, IT CONQUERED THE WORLD, THE BEAST WITH 1,000 EYES, THE BRAIN EATERS, HOW TO MAKE A MONSTER, THE PHANTON FROM 10,000 LEAGUES, DAY THE WORLD ENDED, THE GIANT BEHEMOTH, THE ASTOUNDING SHE MONSTER, THE SHE-CREATURE and THE AMAZING COLOSSAL MAN. Here are just a few of my favorites… 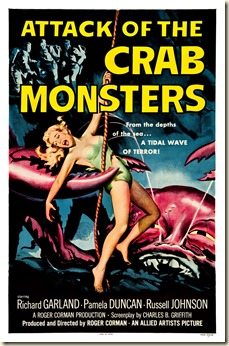 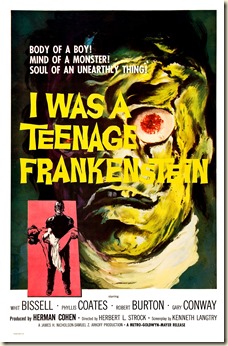 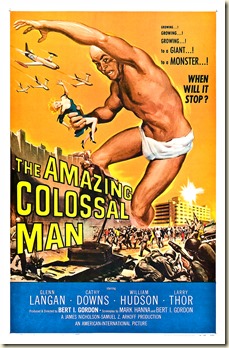 Kallis also collaborated with Reynold Brown on many posters, including the famed poster for ATTACK OF THE 50-FOOT WOMAN. According to CINEFANTASTIQUE, he was too busy to do that one himself, so he hired Brown to paint it.

Here’s one more dot that’s connected between Albert Kallis and a major national company. He was one of the co-founders of IHOP, The International House of Pancakes restaurant chain.

Circling back to Shirley Kilpatrick, as the WILDCAT ADVENTURES text says, she did want to become an actress. But aside from THE ASTOUNDING SHE MONSTER, she only appeared in a two other movies according to her IMDB page. She had a small, uncredited role in the 1954 Western SILVER LODE. Five years later, she played a stripteaser in the film THE GENE KRUPA STORY, which starred Sal Mineo as Krupa.

Shirley had relevant experience for the latter.

In the mid-1950s, in addition to modeling for pinup photos, she worked a stripper in California strip clubs under the stage name “Celeste Kirk.” Columbia Pictures producer Phil Waxman caught her act and signed her to play the stripteaser in the KRUPA film. 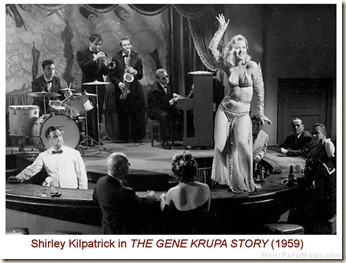 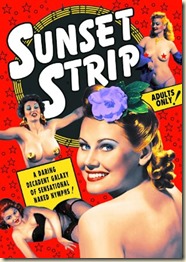 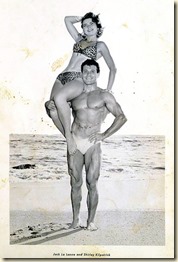 Shirley also seems to have appeared in at least one those short films that were sold through ads you see in the back of men’s magazines. It’s titled “Secrets Of A Paris Model” and is included in the video collection of old stripper and burlesque films SUNSET STRIP, VOLUME 1: VINTAGE STRIPTEASE & BURLESQUE SHORTS, 1926-1956.

There’s a rumor floating around on cult movie websites suggesting that Shirley Kilpatrick was also the actress Shirley Stoler, who had a starring role in THE HONEYMOON KILLERS, smaller roles in a couple dozen other films, and played Mrs. Steve in the PEE-WEE’S PLAYHOUSE TV series. In a word, that rumor is false.

In 1956 she was crowned “Miss Bay Beach” and promoted by George Bruce, a then famous Van Nuys salon-gym operator. Among other things, he had her pose for publicity shots sitting on the shoulder of famed muscleman and fitness trainer Jack LaLanne.

Coming up, a look at some more lost pulp treasure buried in the first issue of WILDCAT ADVENTURES.

For now, let’s pay our last respects to the poor She Monster, who, alas, did not make it back to her home planet…