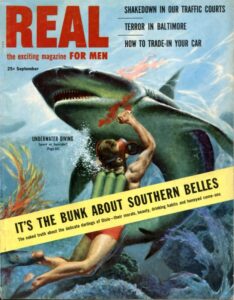 The men’s adventure magazine genre that developed after World War II mixed elements from several other popular genres into a unique blend.

Their action-oriented cover paintings and fiction stories were clearly inspired by the all-fiction pulp magazines published from the early 1900s to the 1950s.

But unlike the classic pulps, which focused on publishing fiction stories, the men’s adventure mags included various types of “true stories.”

Some of those stories were fairly straightforward history, news, advice and how-to articles.

Others were sensationalized stories similar to those in the lurid true crime and detective magazines and the celebrity gossip and scandal periodicals that became popular in the 1940s and 1950s (pioneered by Robert Harrison’s infamous CONFIDENTIAL magazine). 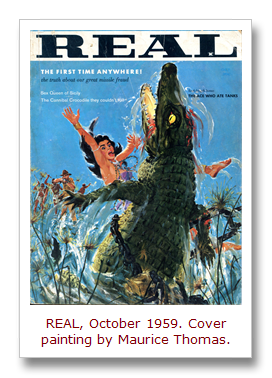 As in those envelope-pushing magazines, “true stories” in men’s pulp mags often had a very tenuous basis in reality.

Many were essentially works of fiction that were given an air of reality through the use of “as told to” bylines, phony quotes, staged photos and stock photos. (A good example posted here a while ago is Robert F. Dorr’s story “BEHIND THE SCENES OF BUDAPEST’S SEX REVOLT”.)

That’s one reason why many men’s adventure magazines have the word “real” or “true” in their titles or subtitles. 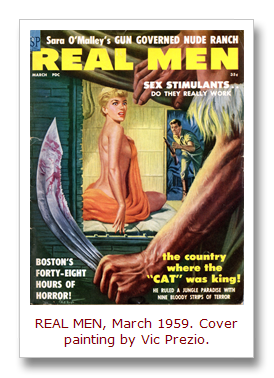 REAL — subtitled “the exciting magazine FOR MEN” — was initially published by Literary Enterprises (from 1952 to about 1959), then by Excellent Publications in the early 1960s, followed by PAR Publications and finally by Arizill Realty and Publishing.

The great skin diver vs. shark cover painting used for the September 1953 issue of REAL shown at the beginning of this post was done by artist Ray Johnson.

The wild croc attack painting on the cover of the October 1959 issue (above) was done by Maurice Thomas.

REAL’s competitor REAL MEN was published by Stanley Publications, one of the companies owned by the pioneering comic book and men’s pulp mag publisher Stanley Morse.

The highly talented and prolific illustrator Victor “Vic” Prezio created the pulpy, eye-grabbing exotic adventure painting featured on the cover of the March 1959 issue of REAL MEN, shown at left.

There were also several shorter-lived men’s adventure magazines that used the word “real” in their titles.

One was REAL ACTION, published from April to November of 1957 by Normandy Associates, another Stanley Morse company.

The artist who painted the very politically incorrect Nazi bondage and torture scene for the August 1963 REAL ACTION cover (shown below) is uncredited.

Another “real” mag was REAL ADVENTURE. It was published by Hillman Periodicals, Inc. from early 1955 to late 1958. The cover of the July 1958 issue features another great painting by Vic Prezio, this time with a man as the bondage and torture victim and a fierce-looking African as the torturer. 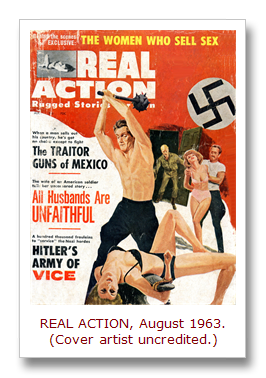 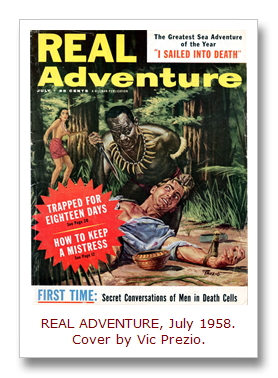 REAL COMBAT STORIES, which ran from the fall of 1963 to early in 1972, was put out by the Reese Publishing company. Reese was owned by B. R. “Bud” Ampolsk and Maurice Rosenfield, who also owned EmTee Publications (another company that published men’s adventure magazines).

The unusual above-and-below water scene on the January 1970 issue (below) was done by an uncredited artist. 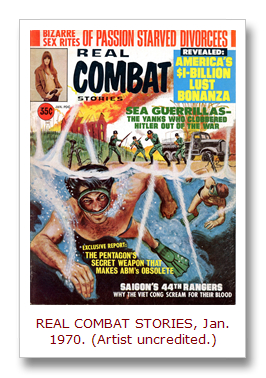 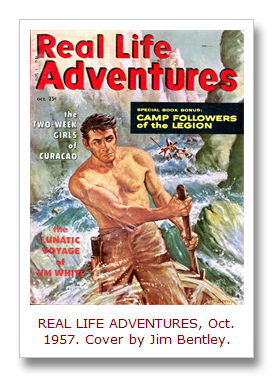 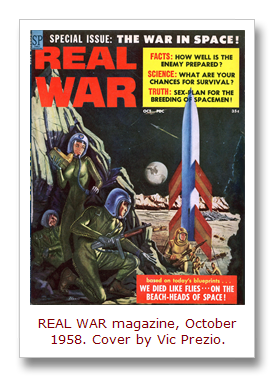 Vista was one of Martin Goodman’s many companies, which included the venerable Magazine Management and other companies in the “Atlas/Diamond” group of men’s postwar pulp mags. Unlike some of Goodman’s decade-spanning men’s adventure magazines — such as STAG, MALE, MEN, and FOR MEN ONLY — REAL LIFE ADVENTURES failed to find a widespread audience and only lasted for about five issues, published in 1957 and 1958. The painting on the cover of the October 1957 issue, shown above, is by Jim Bentley.

Finally, for men who just couldn’t get enough war stories, there was the magazine REAL WAR, in which virtually every story was indeed related to some aspect of war.

I featured my favorite issue of REAL WAR here a while ago: the futuristic October 1958 Special Issue about “THE WAR IN SPACE!” It has yet another great Vic Prezio cover painting.

Getting back to “reality,” you may have noticed that most of the story titles you see on the covers of the men’s adventure magazines that have “real” in their titles do not sound like stories you’d find in mainstream history, travel or news magazines.

For that kind of reality, stick to AMERICAN HERITAGE, NATIONAL GEOGRAPHIC and NEWSWEEK.

If you want reality on steroids, with an LSD chaser, there’s nothing quite like the surreal “reality” of vintage men’s adventure magazines.

Some books to put on your Christmas wish list…