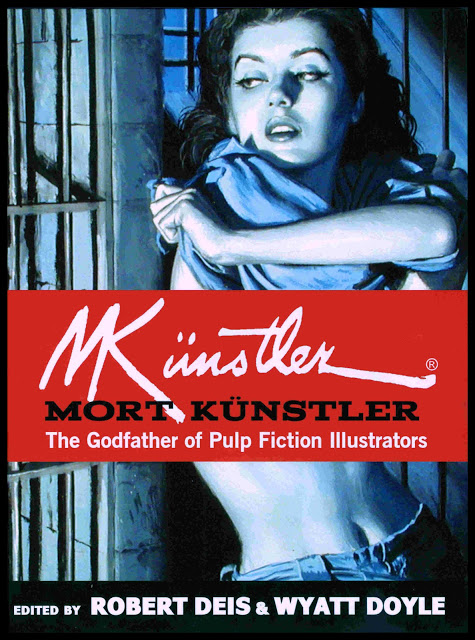 For the Men’s Adventure Library book series I co-edit and publish with Wyatt Doyle, via his New Texture imprint, 2019 was a banner year.

In January, we published POLLEN’S ACTION: THE ART OF SAMSON POLLEN, our second book showcasing original men’s adventure magazine (MAM) artwork by artist Samson Pollen. The first book we did with Sam before he passed away in December 2018 was POLLEN’S WOMEN.

Shortly after it was released, Eva was invited to be the Special Guest of Honor at the 2020 PULPFEST convention in August. (Wyatt and I will be there with her, signing and selling books, so if you’re able to come to Pittsburgh, stop by and see us.)

During the summer and fall of 2019, we worked with the great illustration artist Mort Künstler, his daughter Jane Künstler, President of Kunstler Enterprises, and Mort’s archivist Linda Swanson on an art book featuring classic men’s adventure magazine cover and interior paintings Mort did during the first major phase of his long career.

That book, titled MORT KÜNSTLER: THE GODFATHER OF PULP FICTION ILLUSTRATORS, is now available on Amazon in the US and worldwide. It’s also available on the Barnes & Noble website and via the Book Depository site, which offers free shipping to anywhere in the world.

And, you can buy a copy signed by Mort himself via his official website.

In the store section of Mort’s site, you can also buy high quality prints of some of the original MAM paintings featured in the book, as well as many other books, calendars, prints and collectibles that feature his artwork. 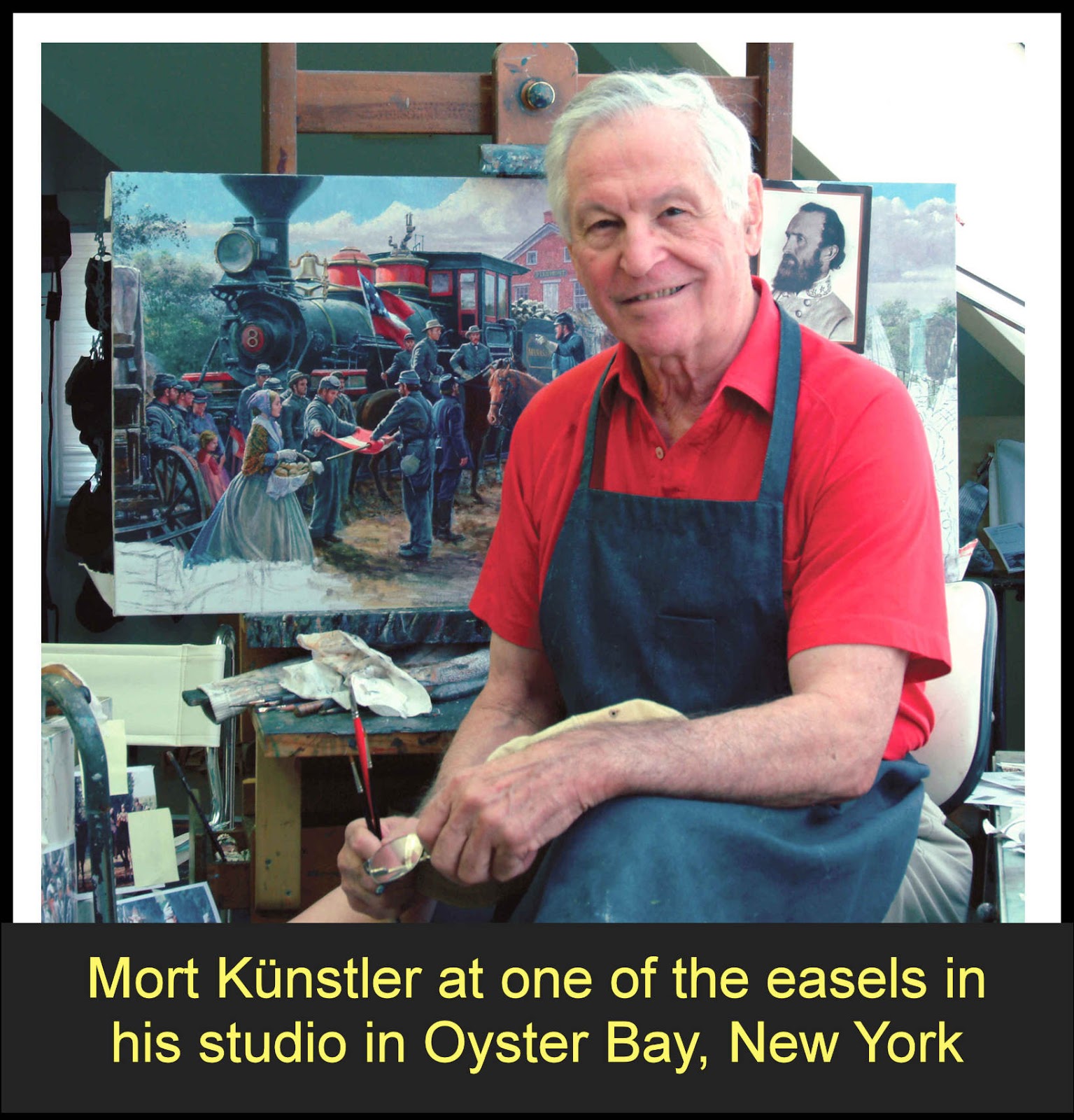 Nowadays, Mort Künstler is most widely known for the art he produced in the decades after the men’s adventure periodicals faded away and disappeared from newsstands in the late 1970s.

Around the time MAMs were becoming extinct, he began a new phase of his career doing historical artwork.

In the late ‘70s, he made a splash with Western paintings sold by fine art galleries.

Then, in 1982, a commission from CBS-TV to do artwork for the mini-series, THE BLUE AND THE GRAY, led to a period in which he focused on Civil War paintings. It wasn’t long before he became the most-collected and best known Civil War artist in the country.

Mort went on to do many paintings depicting scenes from throughout American history. And, as noted in the biography on his website, he came to be called “the premier historical artist in America.”

However, as Mort himself explains in an extensive interview with him in our new book, he honed his craft and made his living early in his career by doing cover paintings and interior illustrations for men’s adventure magazines.

Most of that artwork was done for the “Atlas/Diamond” line of MAMs published by Martin Goodman’s Magazine Management company and its subsidiaries (FOR MEN ONLY, MALE, MAN’S WORLD, MEN, STAG, etc.).

In fact, Mort created hundreds of awe-inspiring cover paintings and interior illustrations for the Goodman MAMs, as well as for other top mags in that genre, such as ARGOSY and TRUE.

The new book we created with him showcases over one hundred of his original MAM paintings.

The text includes a preface by Stephanie Haboush Plunkett, Deputy Director & Chief Curator of the Norman Rockwell Museum in Stockbridge, Massachusetts and an introduction by Michael W. Schantz, Ph.D., Executive Director of the Heckscher Museum of Art in Huntington, New York. 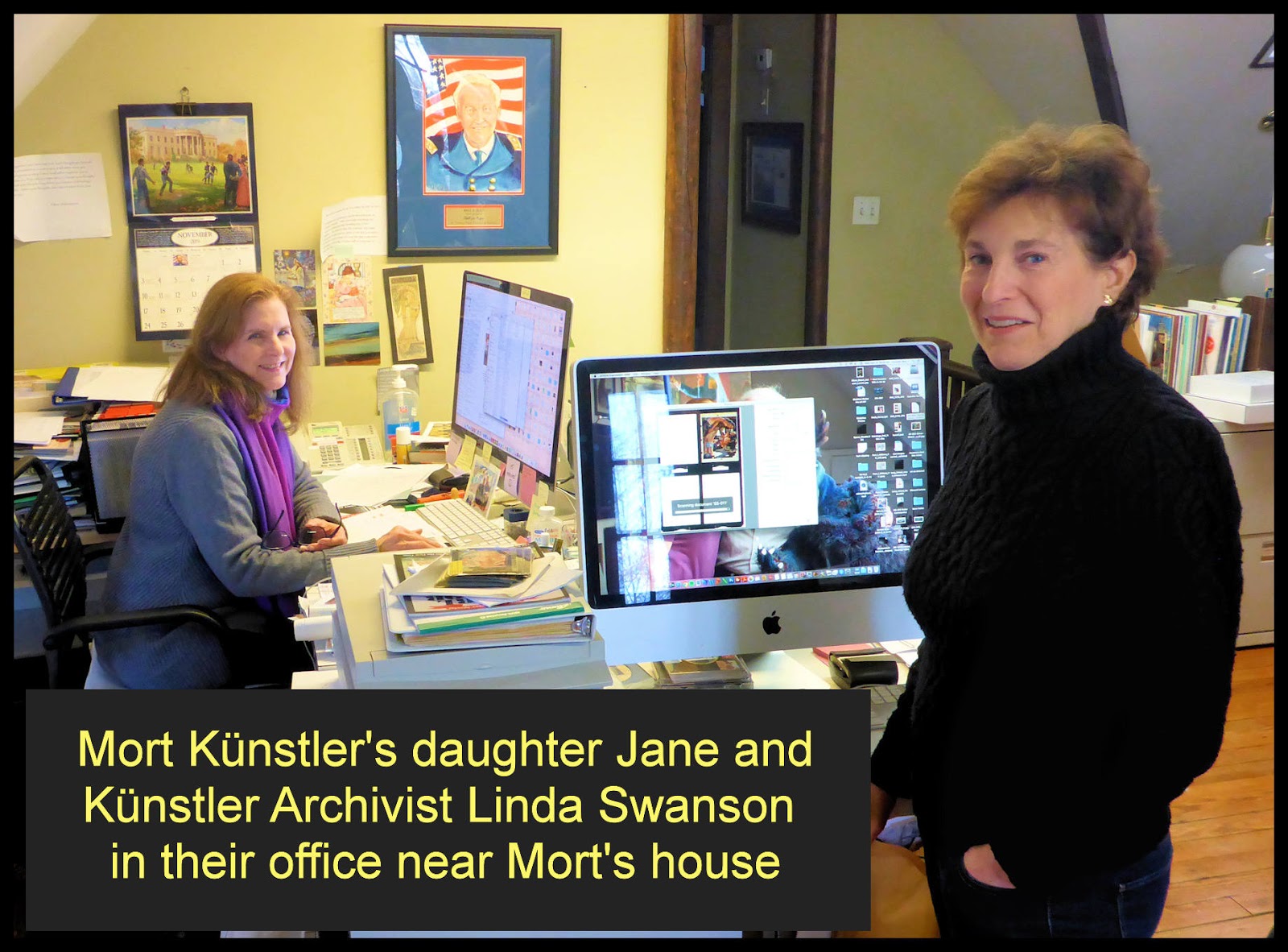 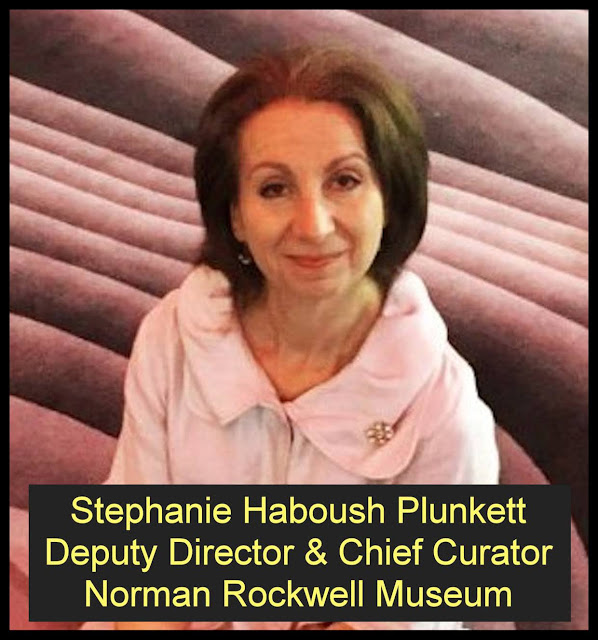 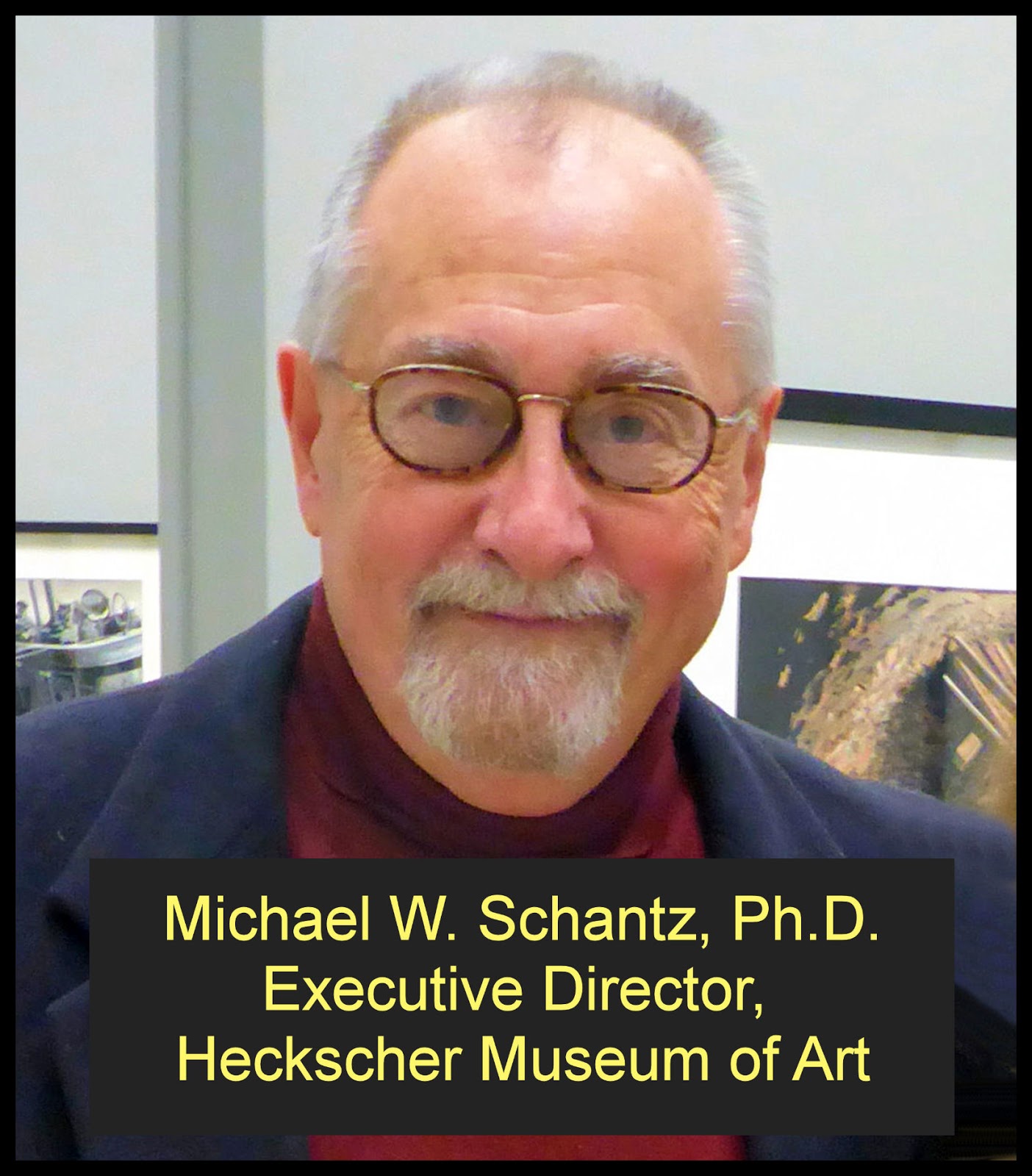 We borrowed the title for the book from the title Michael gave to the special exhibit of Mort’s men’s adventure magazine paintings that was on display at the Heckscher Museum in the fall of 2019.

As explained by displays in the show — and by Michael and Mort in the front matter section of the new book — the use of the term “Godfather” reflects the fascinating links between Mort and writer Mario Puzo, author of the blockbuster novel THE GODFATHER.

From the late 1950s to the late-1960s, before THE GODFATHER made Puzo famous, he worked as a regular writer and sometimes as Associate Editor for the Magazine Management MAMs Mort Künstler did artwork for.

In fact, Mort created illustrations for dozens of the war and action/adventure stories Puzo penned for those magazines, which he often wrote under the pseudonym Mario Cleri. And, because Mort was so good and had such a vivid imagination, the editors sometimes had Mort paint action-filled scenes first — then had Puzo write stories to go with them.

When THE GODFATHER was published in 1969, Martin Goodman bought the right to publish a “Book Bonus” version in the August 1969 issue of MALE. Naturally, Mort was tapped to create the cover for that issue. And, when the Literary Guild edition of THE GODFATHER was published that summer, Mort was hired to create the artwork for the Guild Bulletin announcing it. 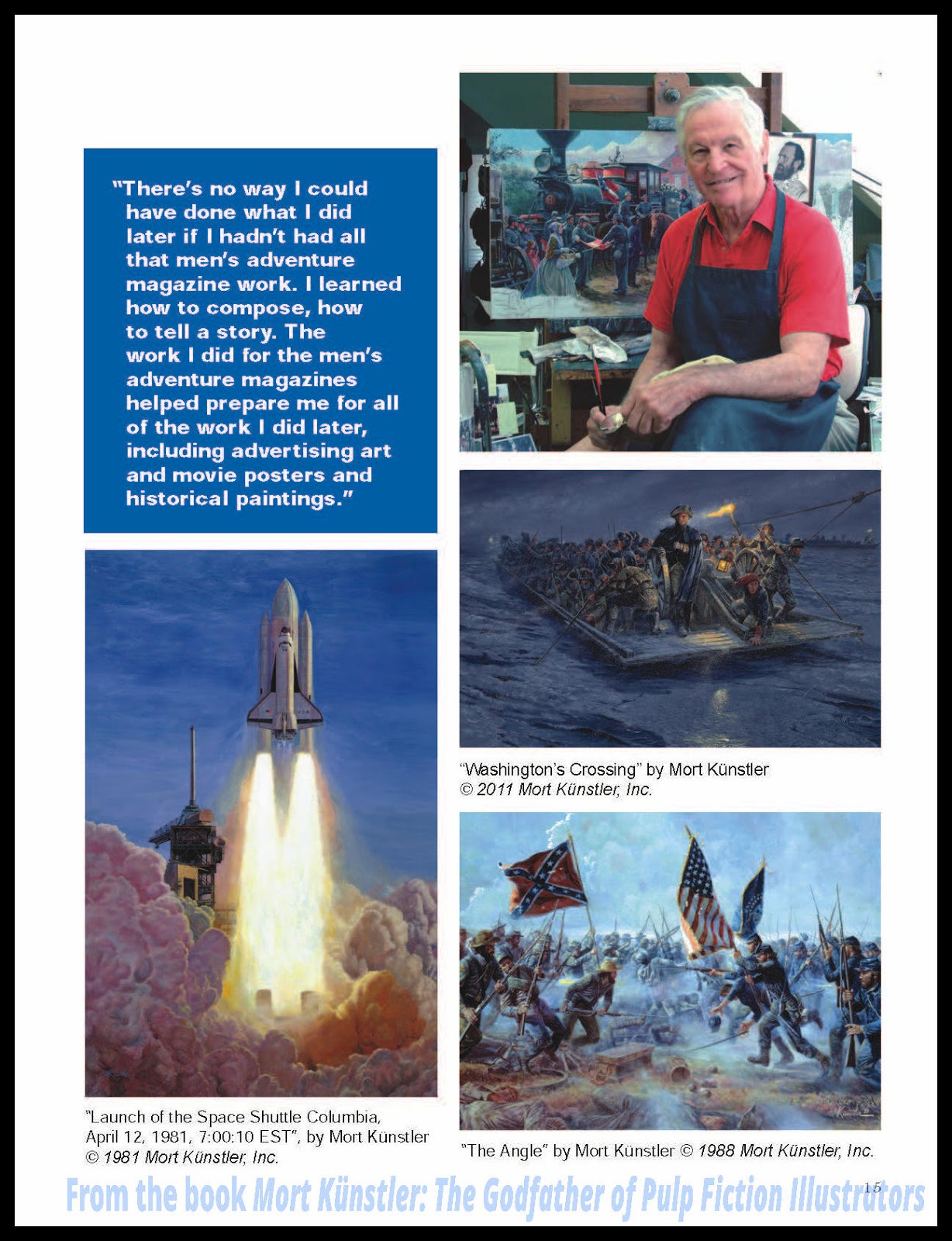 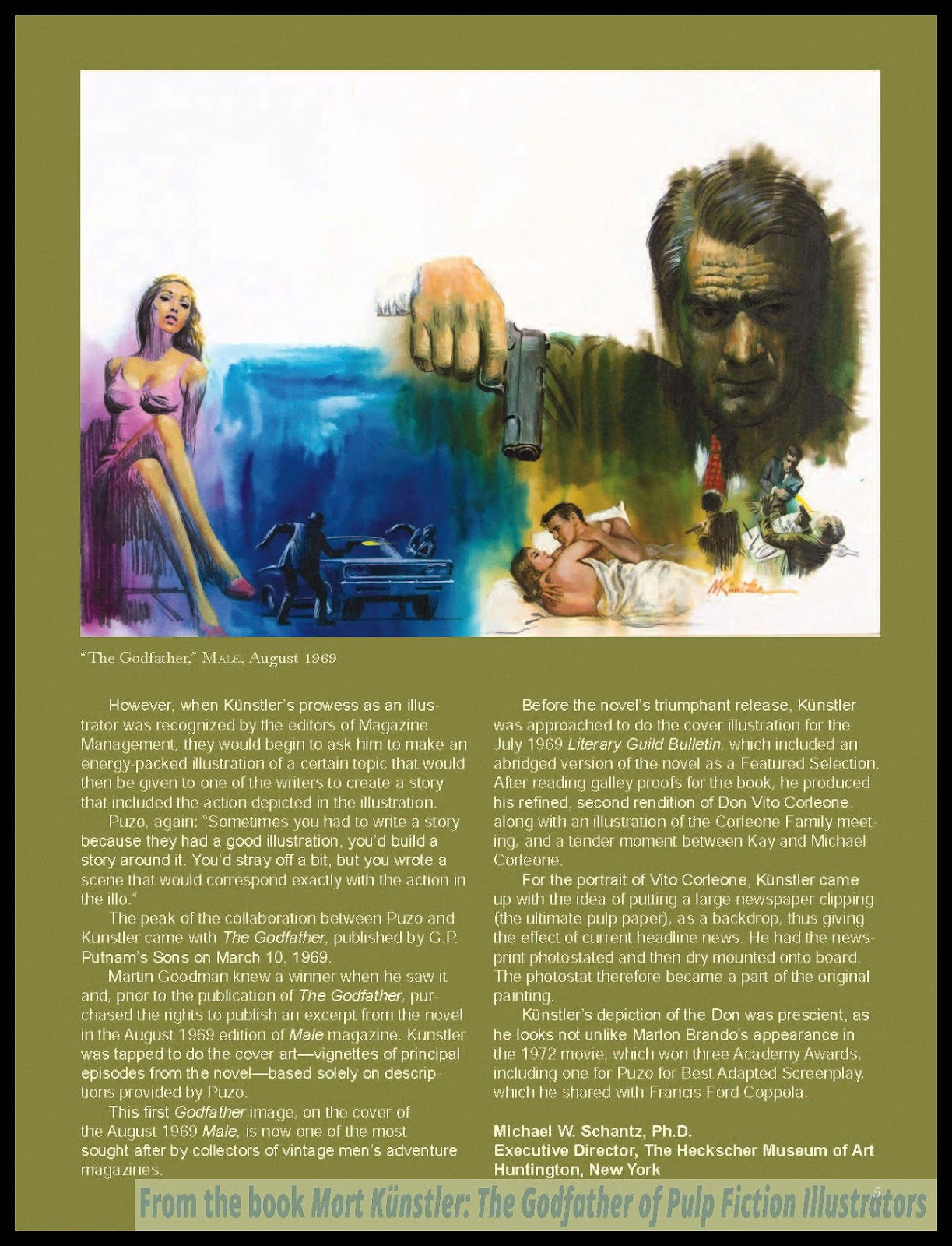 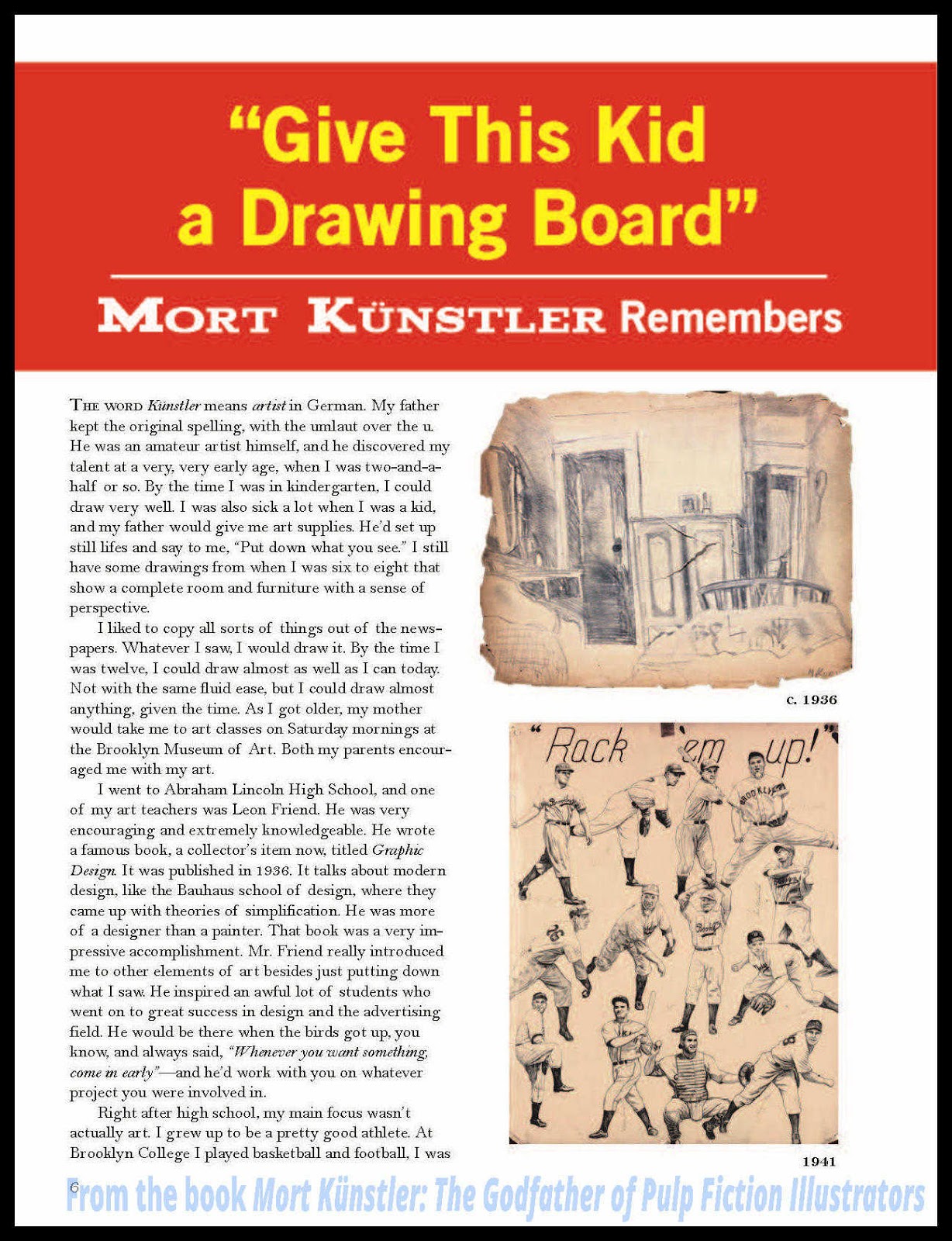 Last November, Wyatt and I traveled to New York to see Mort at his home in Oyster Bay. While there, we met his wife — and favorite female model — Deborah Künstler.

We used her image from one of Mort’s paintings on the front cover of MORT KUNSTLER: THE GODFATHER OF PULP FICTION ILLUSTRATORS. It’s part of a lush blue duotone painting he created for a spy story in STAG, April 1958.

While we were visiting with Mort and Deborah, we also had our first in person meeting with Jane and Linda.

To top it all off, we got a guided tour of the exhibit of Mort’s MAM artwork at the beautiful Heckscher Museum from Michael Schantz. 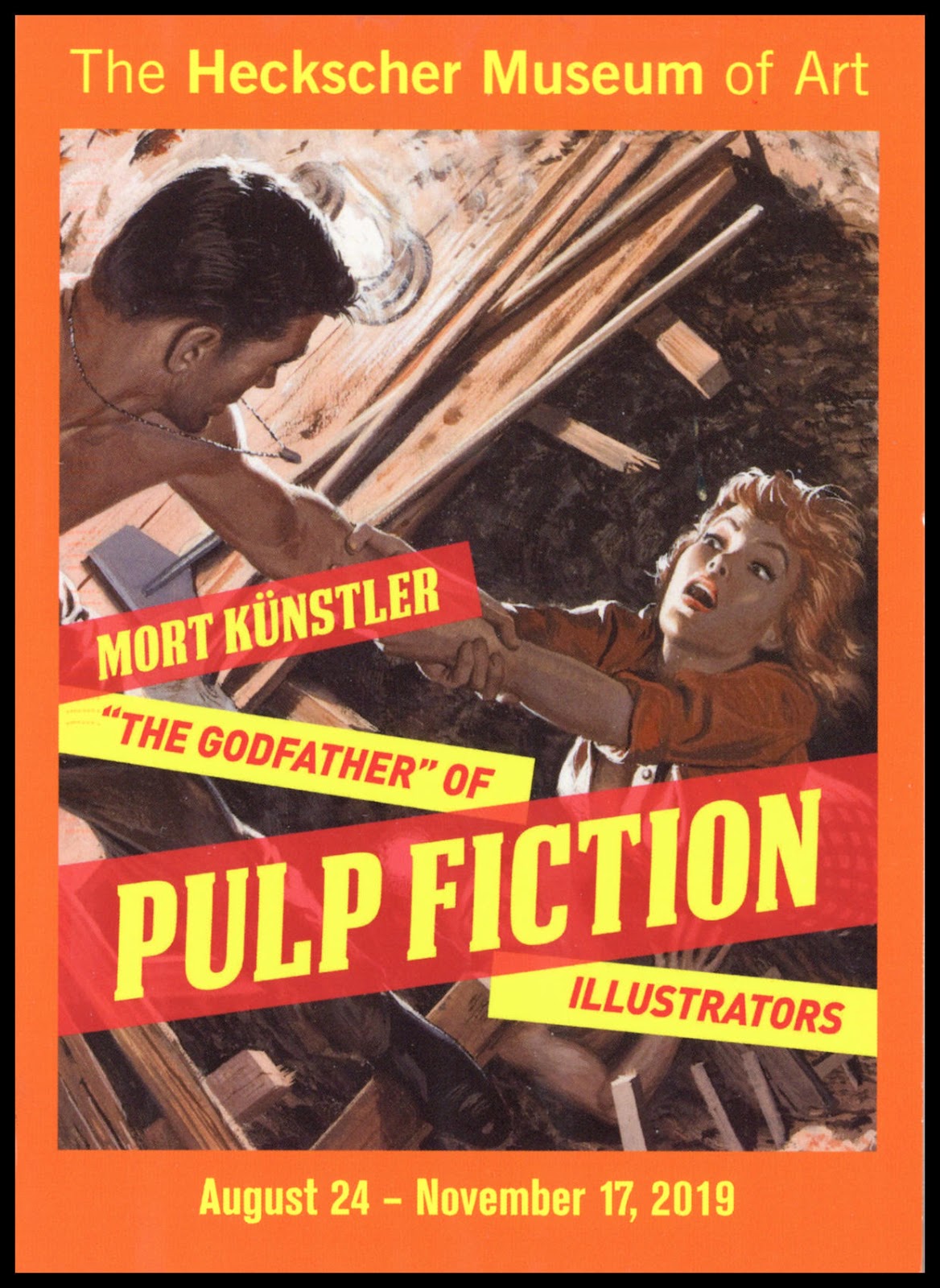 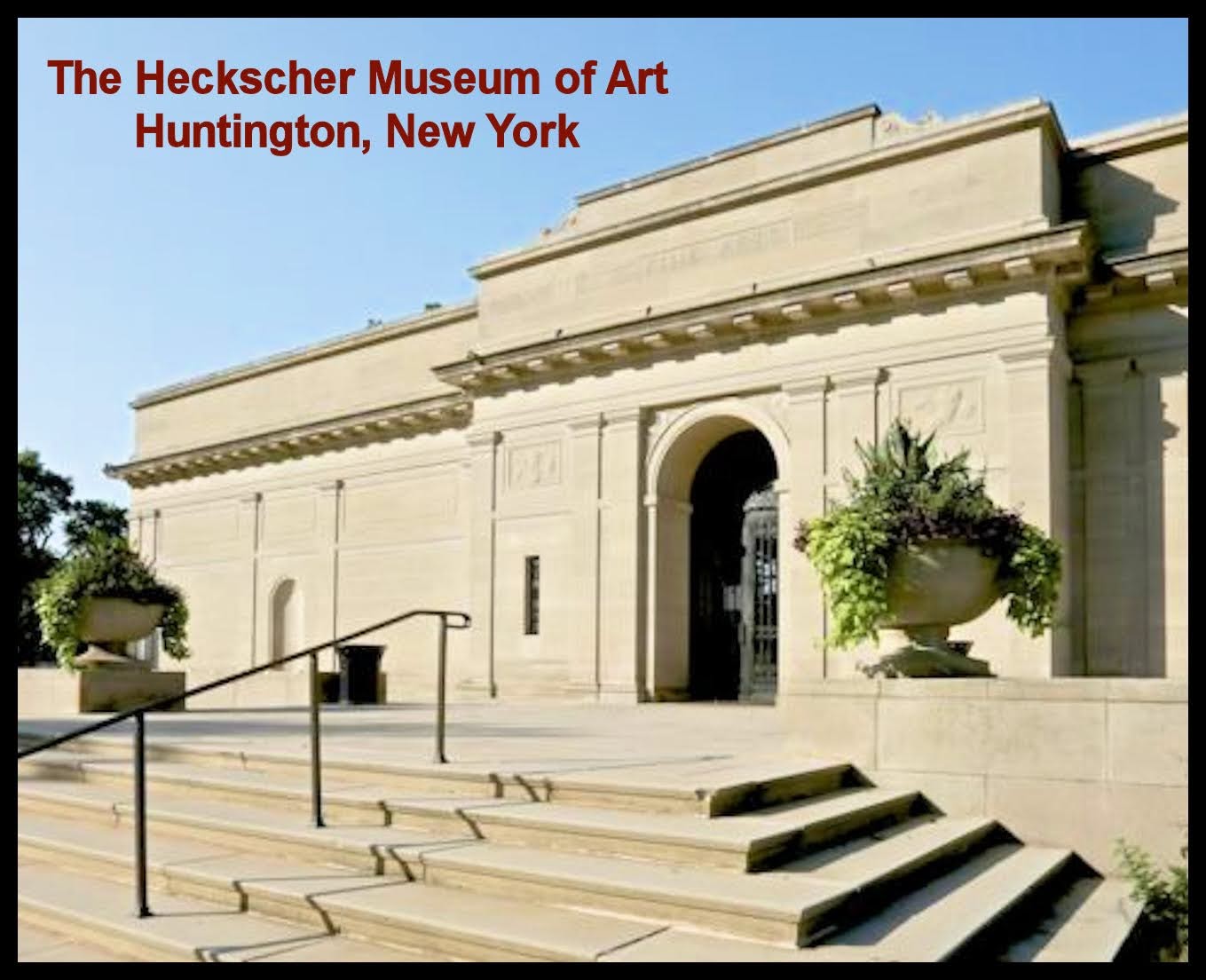 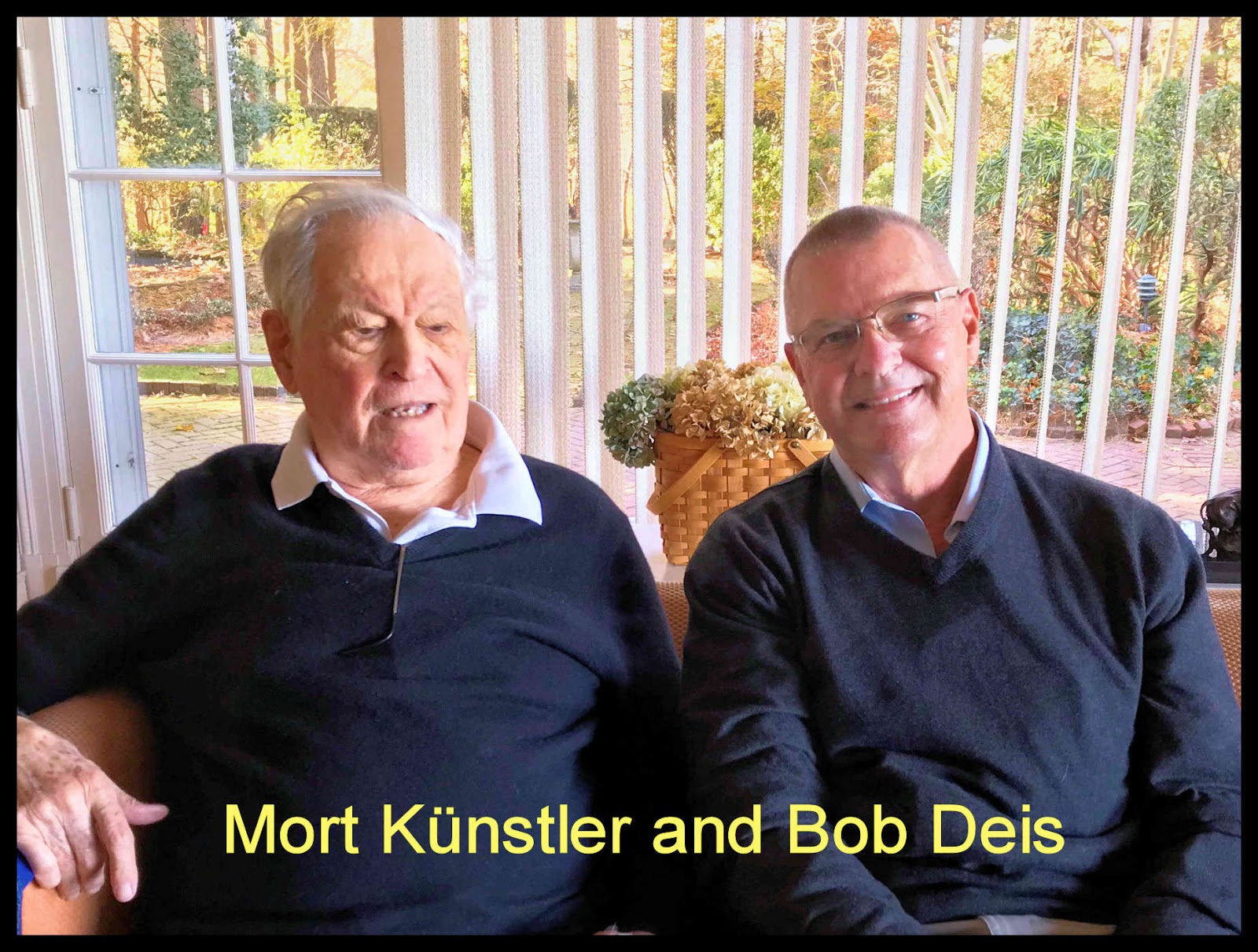 We’re extremely grateful to Jane and Linda for all the work they put in to help us create the new book and to Mort for giving us his blessing and sharing his memories with us for the text. With their input, and the insightful introductory text provided by illustration art experts Plunkett and Schantz, we created one helluva cool book — the first to focus on Mort’s MAM art.

This post provides a look at some pages from it. The featured artwork is shown in full-color, full-page spreads. We decided to keep those pages text-free, so each painting can be viewed and appreciated in itself as a piece of art. An appendix in the back of the book provides a list of where each painting appeared.

As you can see from the first two examples shown below, Mort did some terrific Civil War paintings for MAMs long before his later Civil War art phase. At left is the painting he did for the cover of STAG, October 1956. Next to that is his cover art for MEN, September 1957.

At right is the full blue duotone painting with the image of Deborah that we chose for the cover of the book. It was used for an interior illustration in the April 1958 issue of STAG. 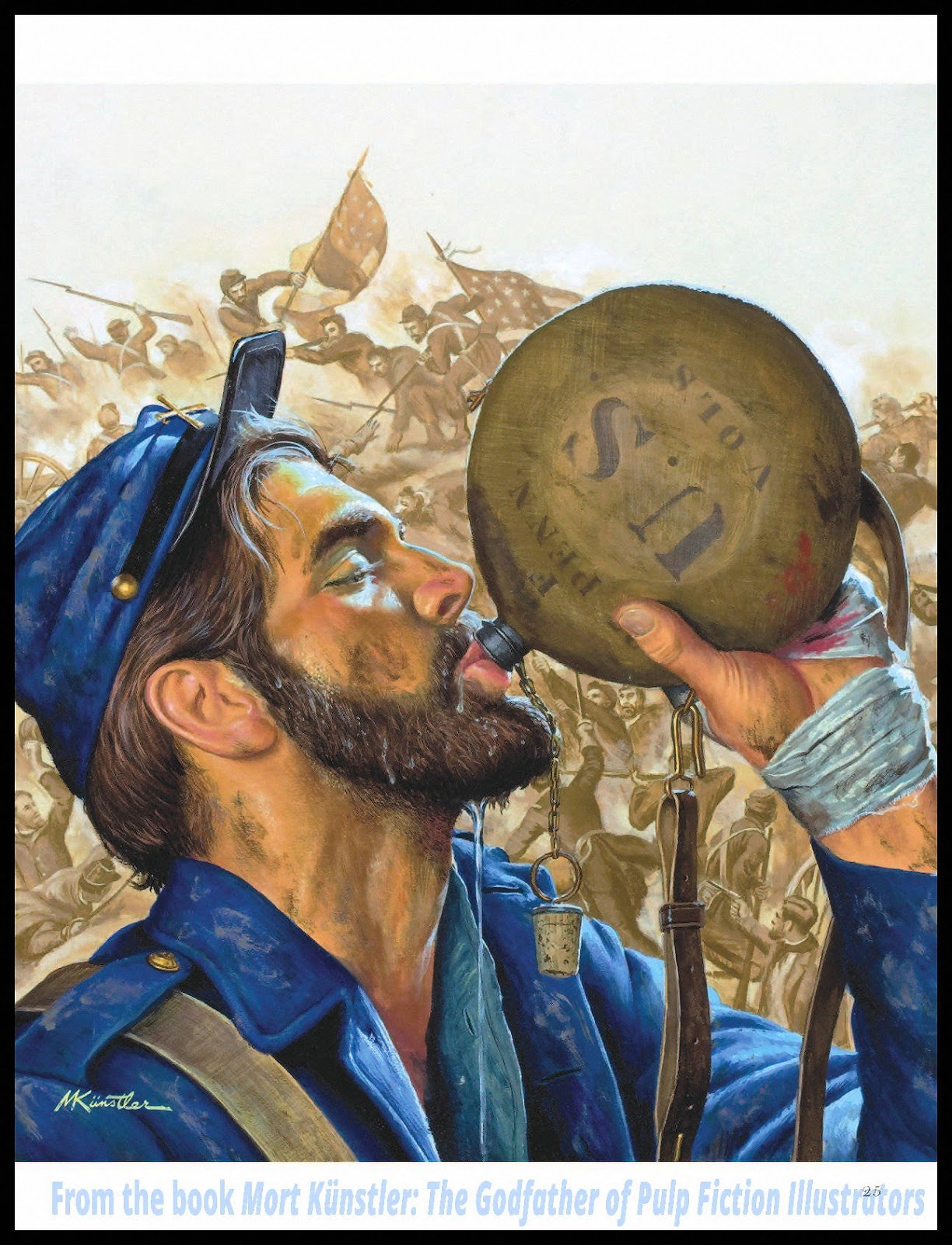 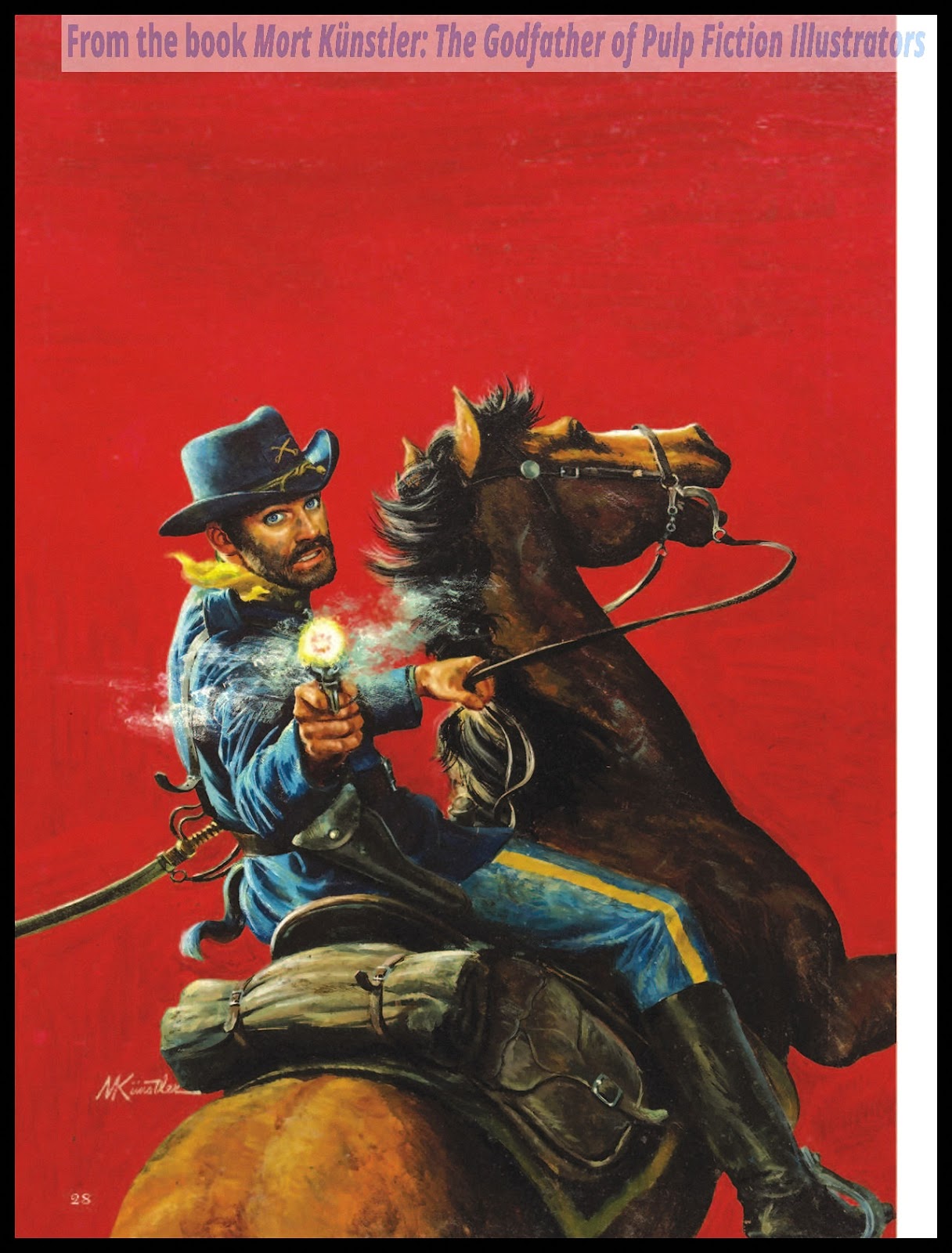 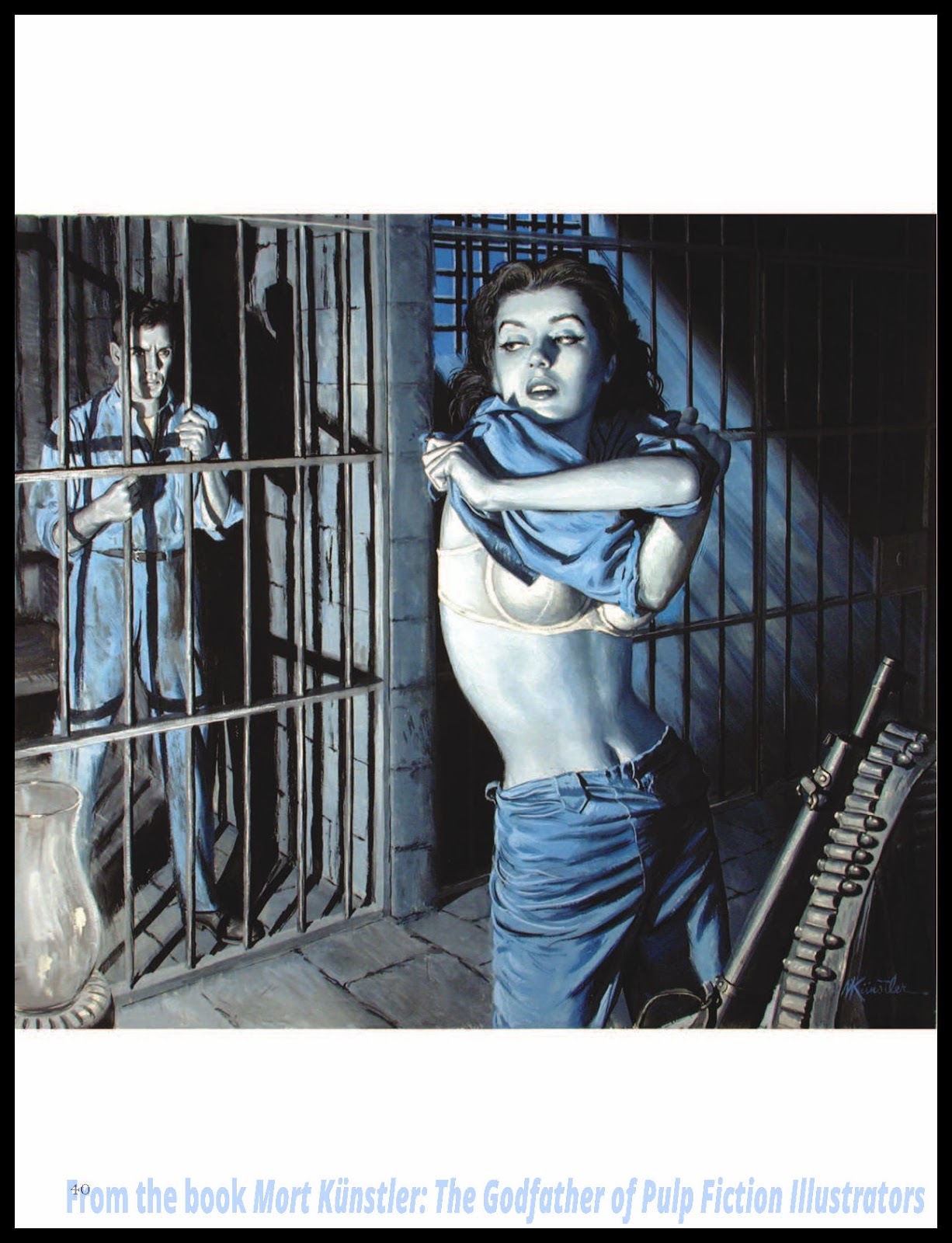 Below at left is Mort’s cover painting for STAG, December 1959. It goes with a World War II a story inside about a B-24 crew.

The wild and crazy boat attack scene next to that is one of my favorite Mort Künstler paintings for a Cold War story. It was used on the cover of MALE, July 1960.

The Mort Kunstler illustration showing Bigfoot was used for a story in the March 1960 issue of TRUE and is well known to fans of cryptozoology lore. It’s one of the images we included in our book collecting MAM stories and artwork about Bigfoot, Sasquatch, the Loch Ness Monster and other legendary creatures, the CRYPTOZOOLOGY ANTHOLOGY. 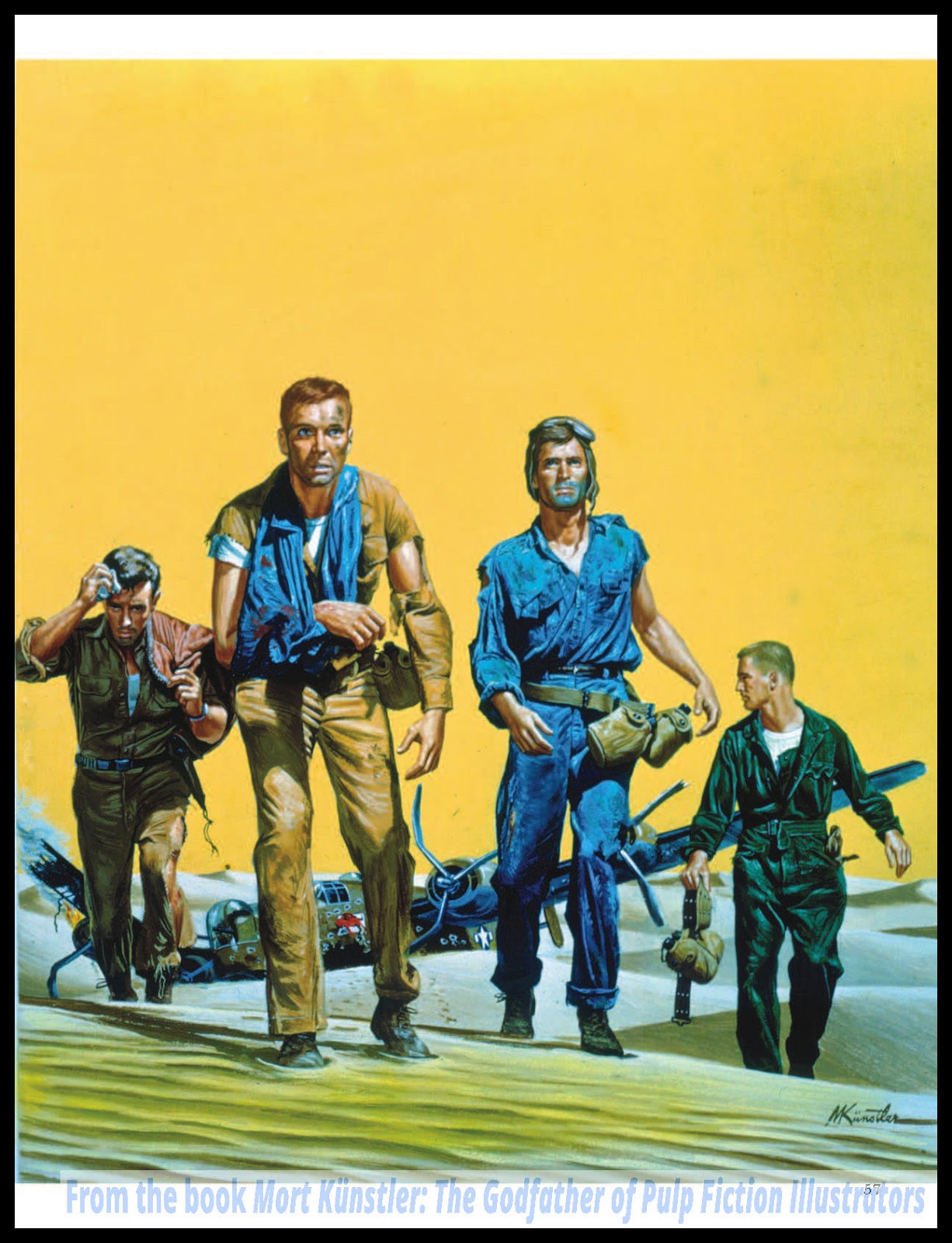 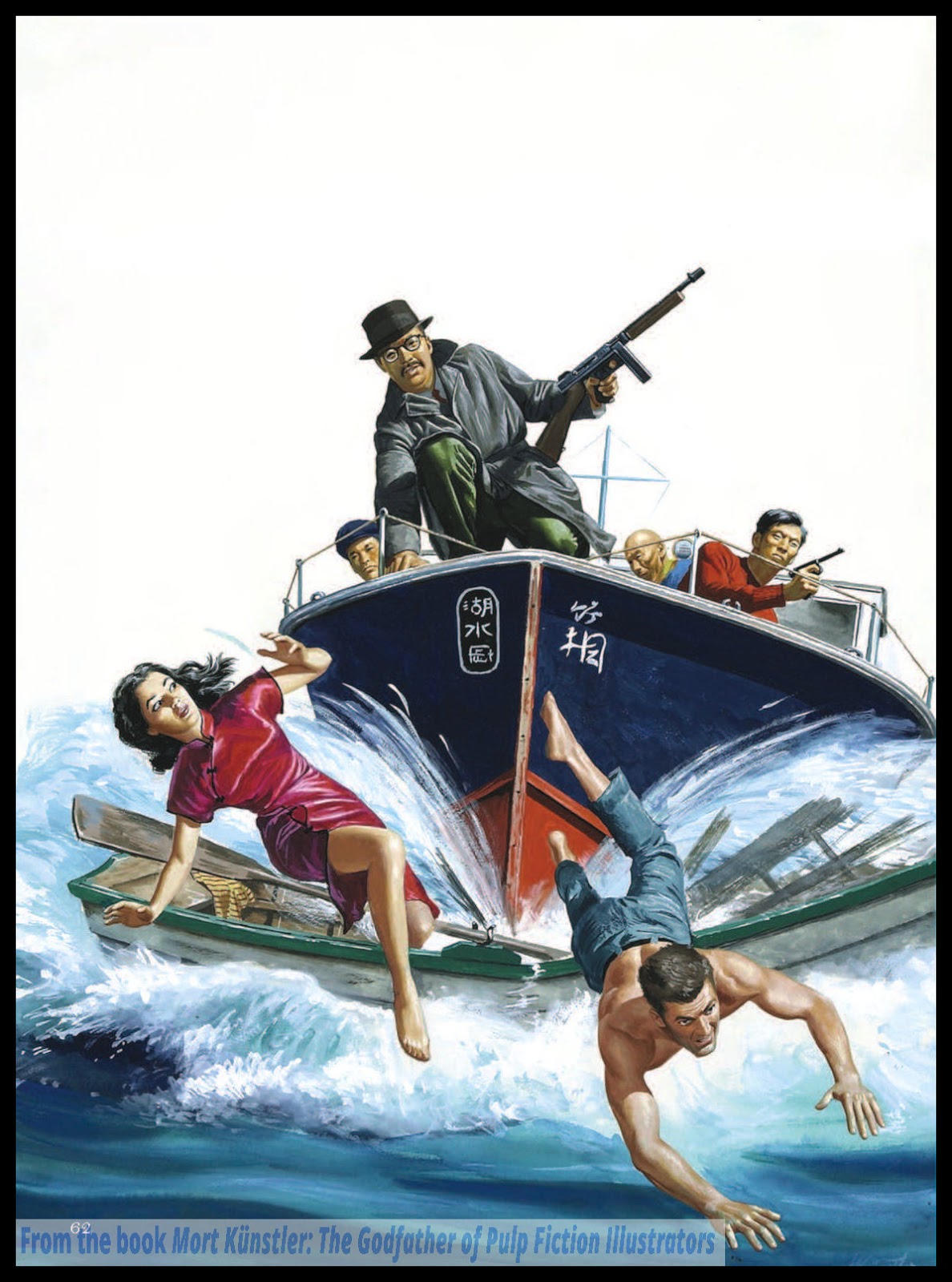 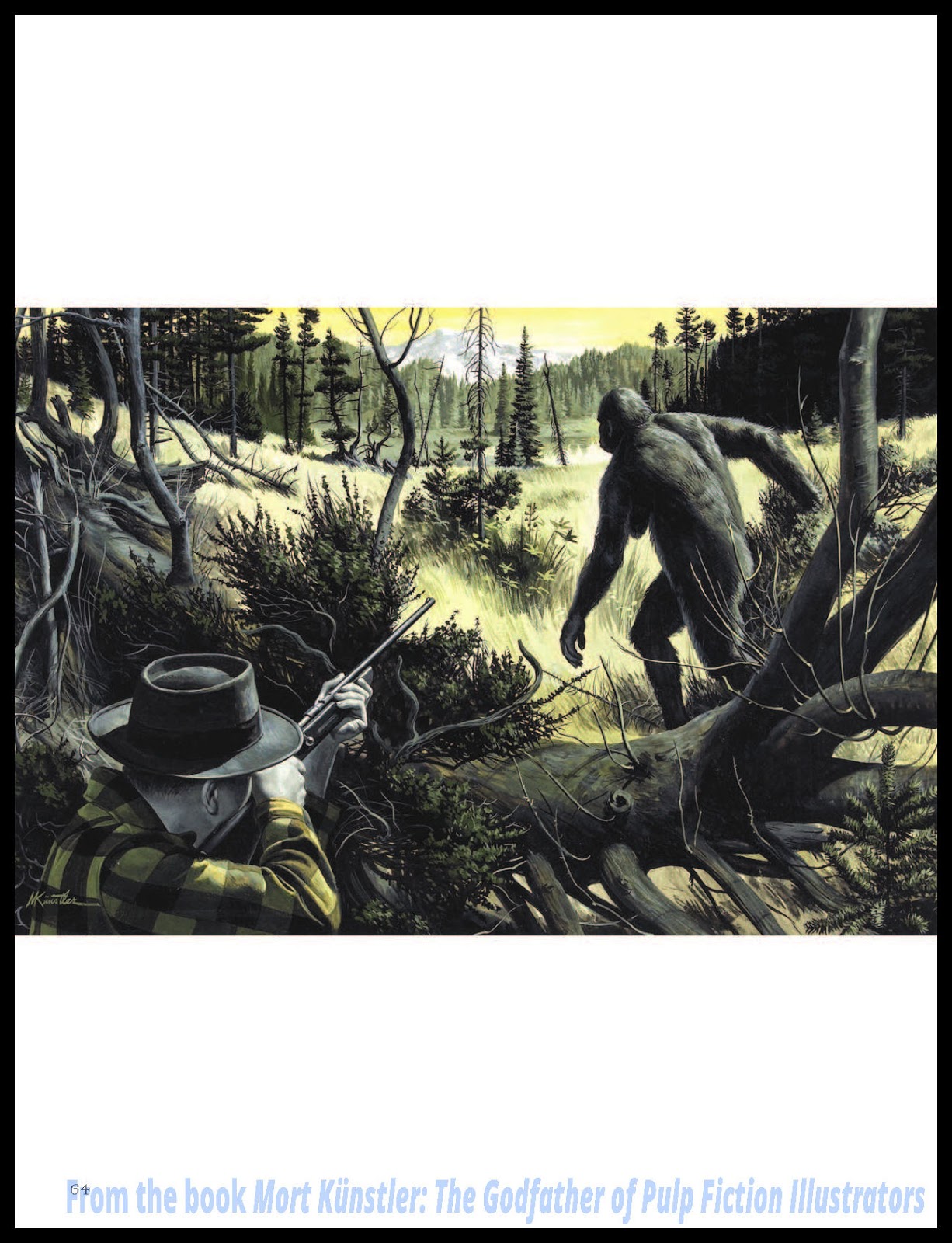 The first painting in the pages shown below was used on the cover of STAG, May 1963. It goes with a classic story by Walter Kaylin about the ill-fated crew of the USS Indianapolis, many of whom were killed by sharks after their ship was sunk by a Japanese submarine in 1945. You may recall that incident being described in the movie JAWS by Robert Shaw’s character Quint, who said he was one of the crewmen who survived. Kaylin’s story about the USS Indianapolis is included in our anthology of his great MAM stories, HE-MEN, BAG MEN & NYMPHOS.

If you’re an action/adventure movie fan, you almost certainly recognize the suave-looking guy surrounded by the bevy of beauties in the second image below. It’s Mort’s portrait of Sean Connery as James Bond, in a painting he did for the cover of the June 1965 issue of MALE.

The depiction of the Japanese Zero being shot down by an American P-40 Warhawk fighter is Mort’s painting for the cover of STAG, December 1965. It goes with the fact-based story “Yank Ace Who Battled the Japs Over Pearl Harbor,” one of the classic war stories by writer and military historian Robert F. Dorr we included in our anthology of his MAM stories, A HANDFUL OF HELL. 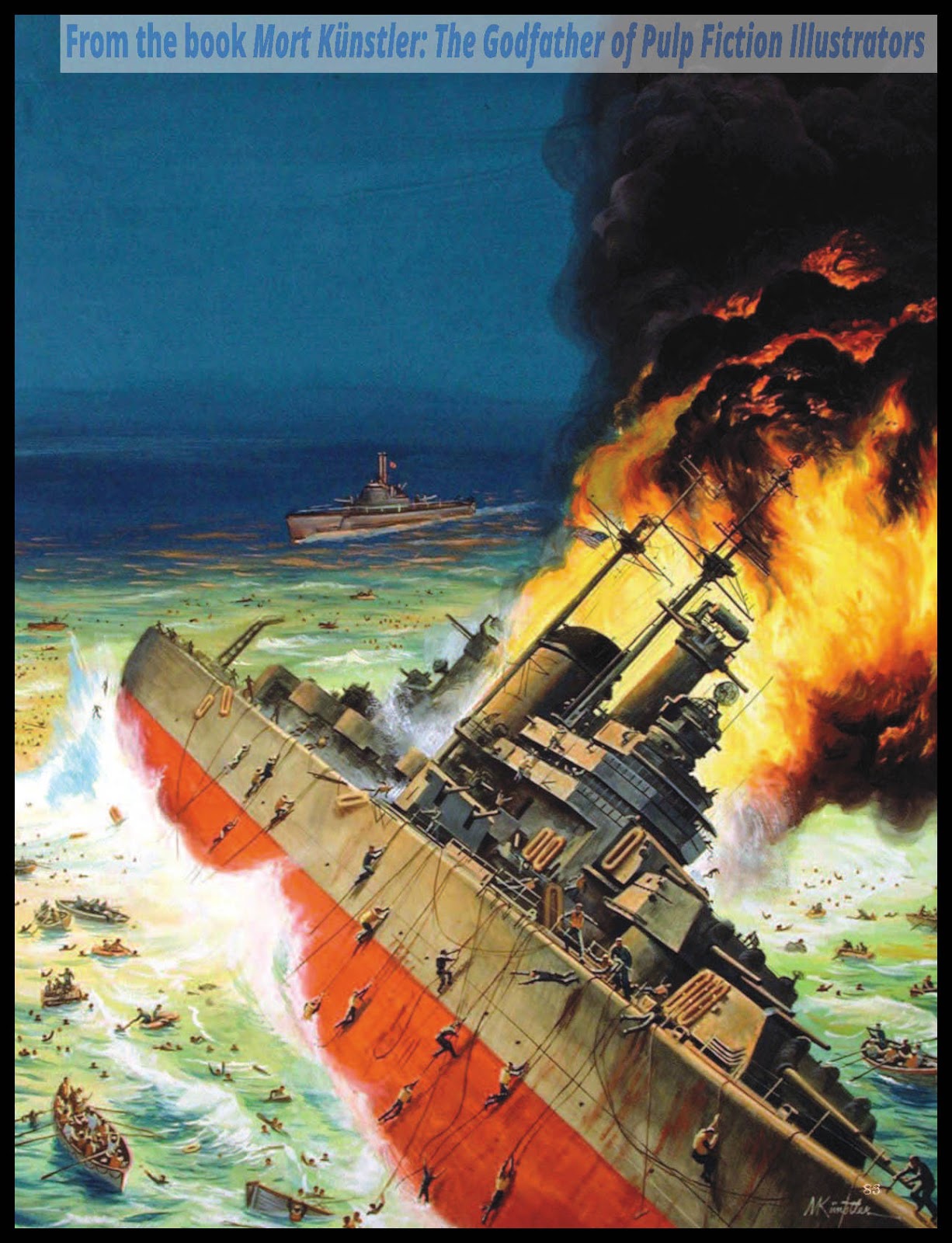 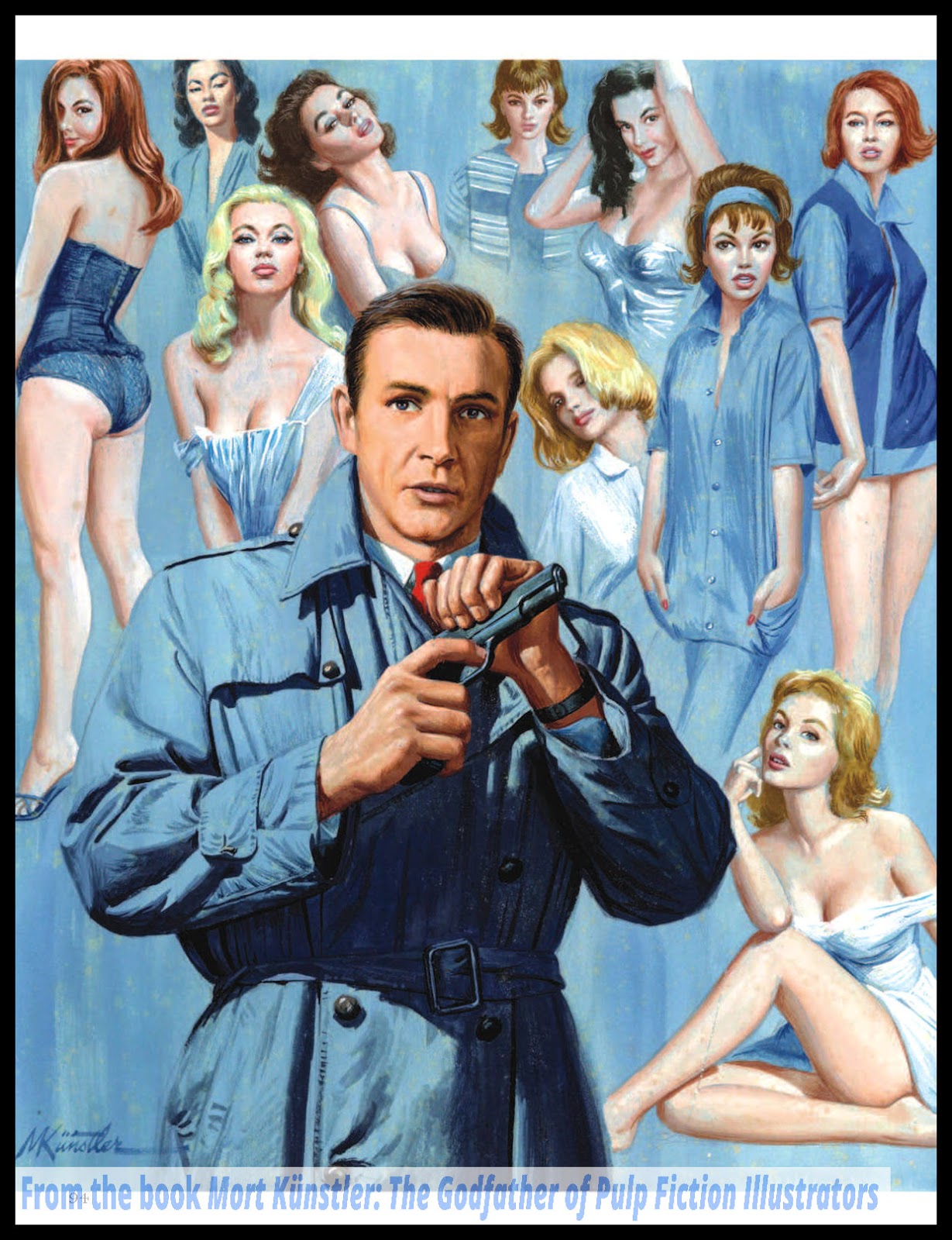 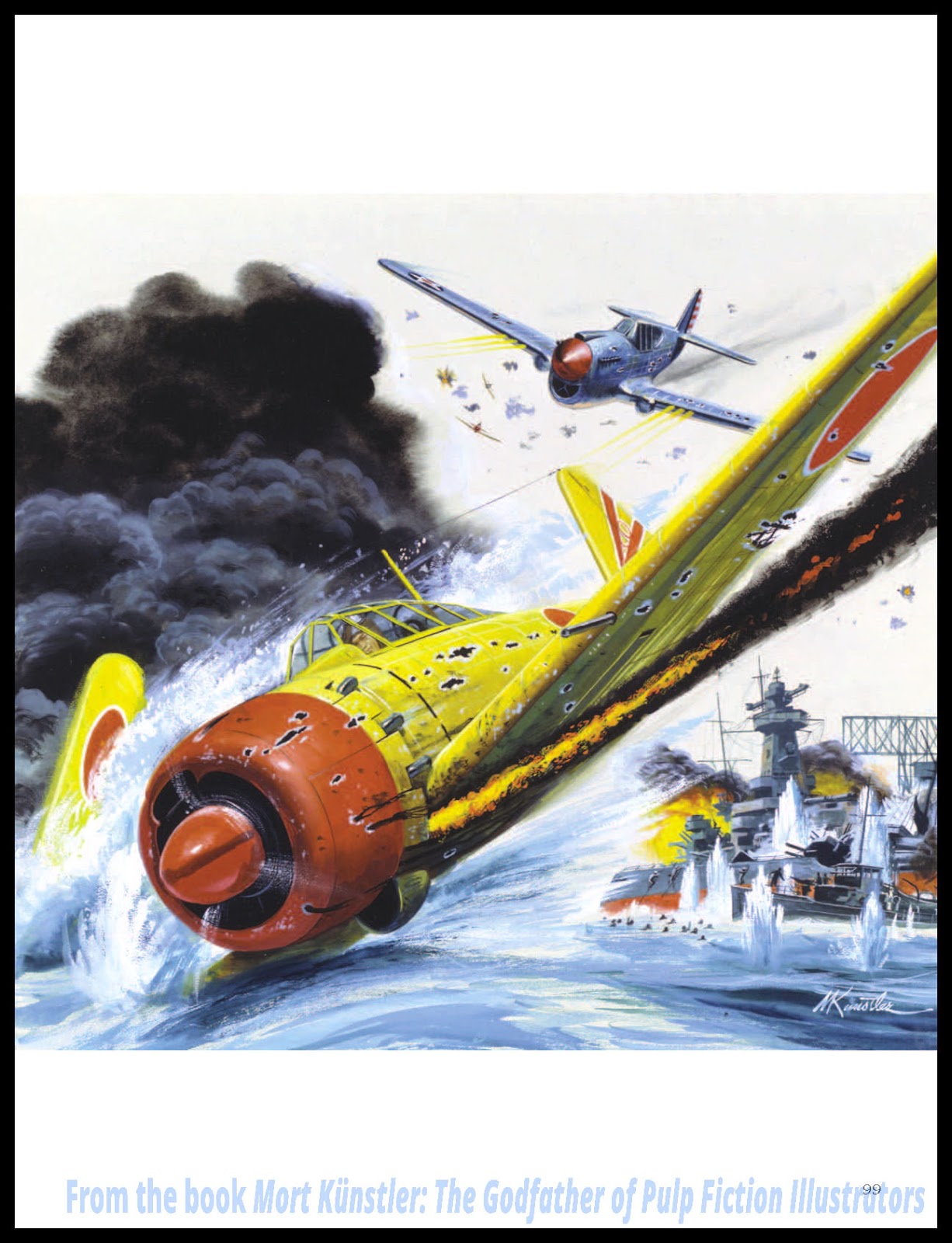 The alluring gal in the pool below at left is one of two paintings by Mort featured in inset panels on the cover of STAG, April 1967.

The exotic adventure painting next to that was used on the cover of STAG, June 1968.

Mort’s creatively composed painting at right was used on the cover of MEN, June 1969. Magazine Management Art Director Larry Graber, who Mort talks about in the book, would sometimes tell artists where to leave blank areas for text in their illustrations. Larry’s instructions for this example would have been interesting to hear. 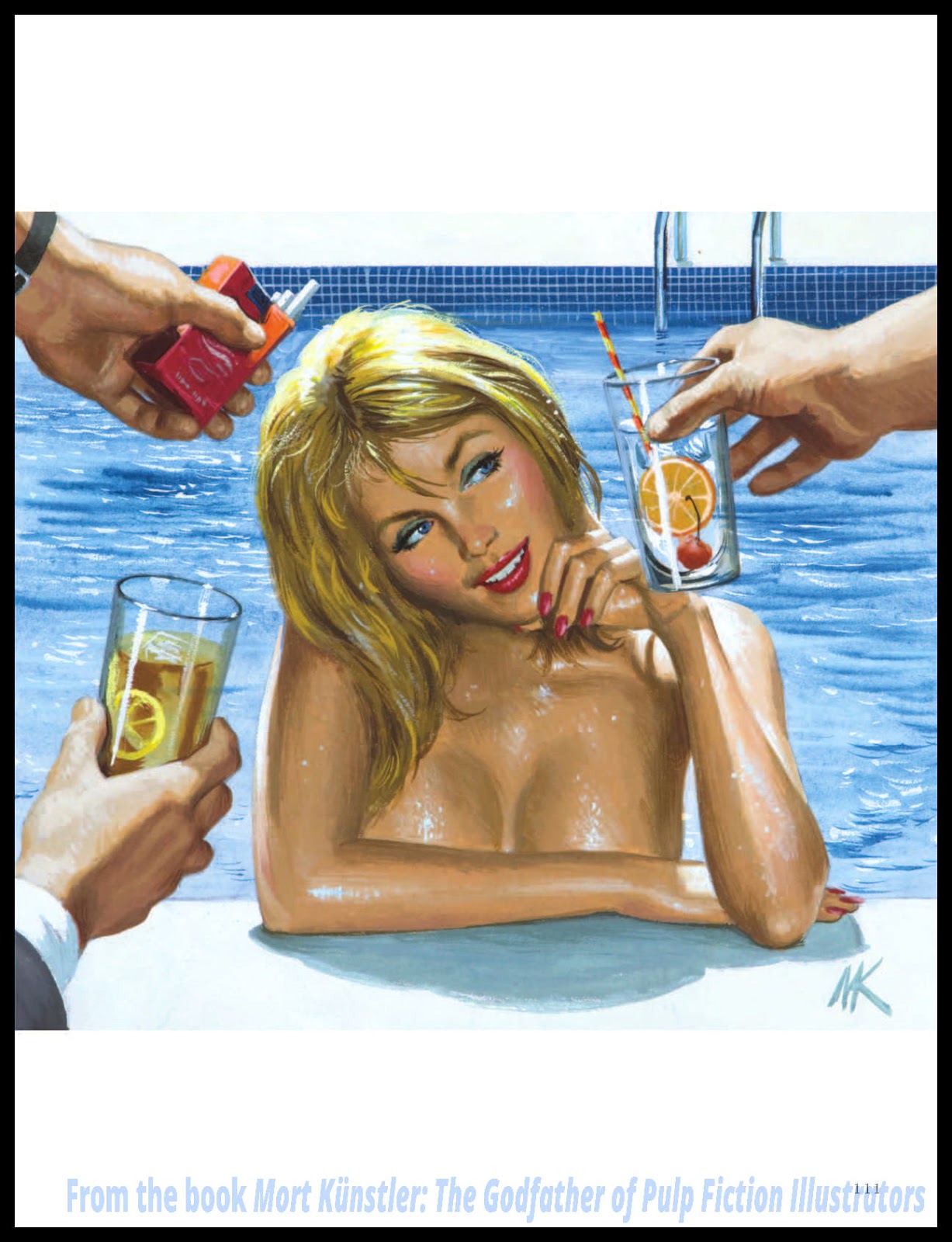 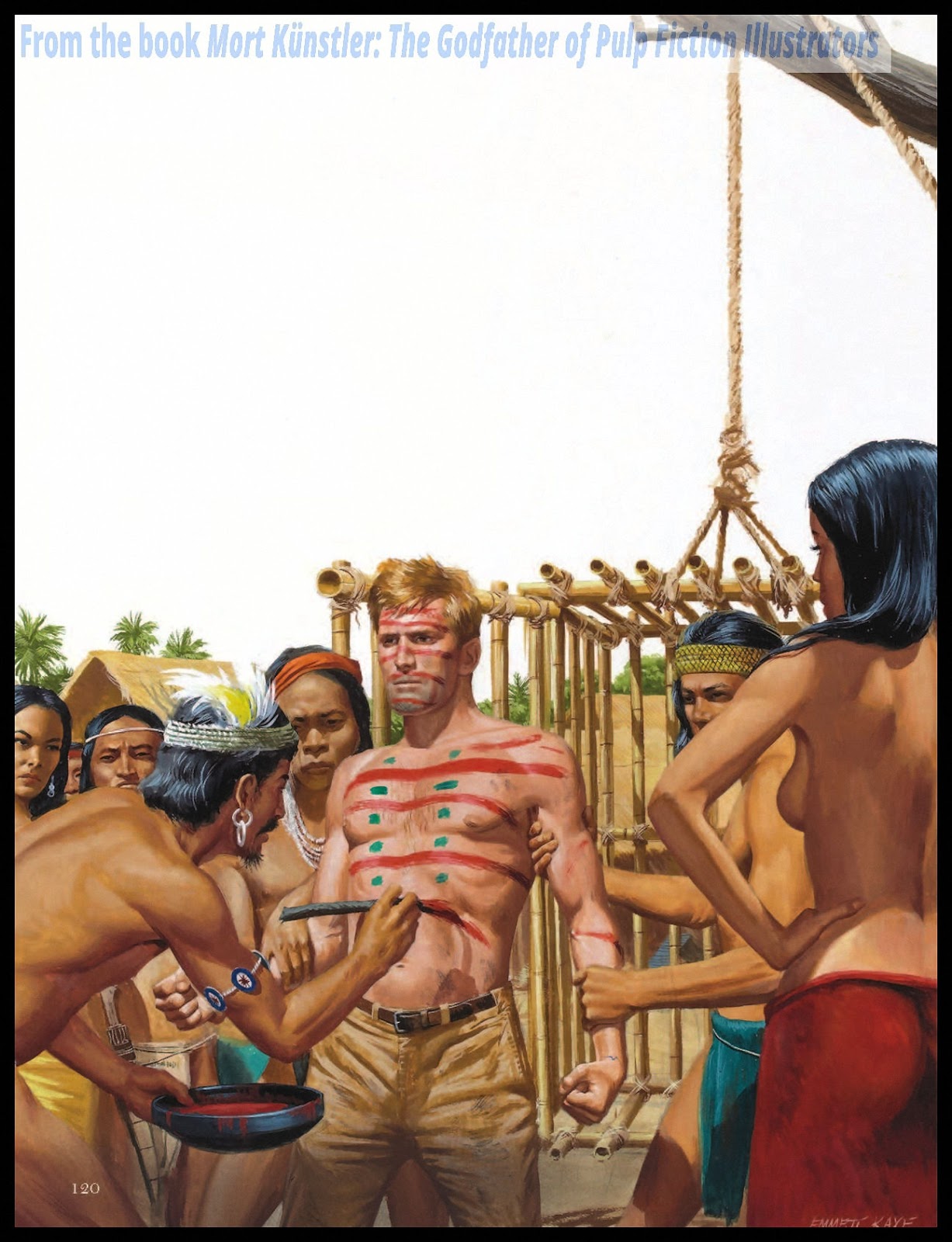 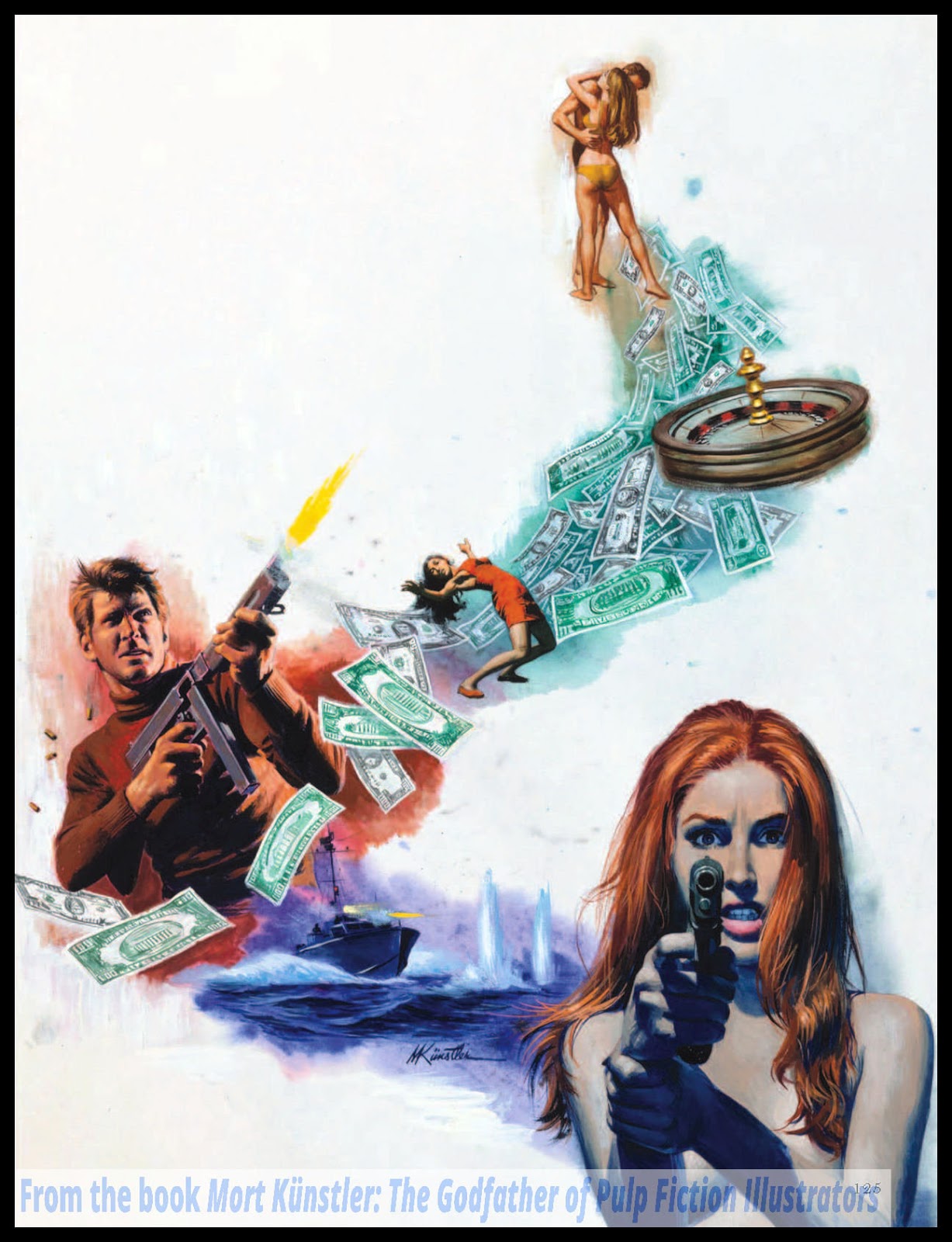 I’ll be posting more pages from the book on this blog and in our Men’s Adventure Magazines & Books Facebook Group in the weeks ahead.

In the meantime, if you buy a copy of the book and enjoy it, I hope you’ll post a positive review of it on Amazon or Goodreads, or on a blog or website you write. Reader reviews are extremely important for indie publishers like Wyatt and me.