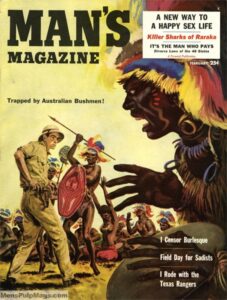 Cool cover paintings are one of the defining characteristics of the men’s adventure magazines that flourished in the 1950s and 1960s — and a primary reason why they are popular collectors’ items today.

Of course, painted covers were common on all types of magazines prior to 1950. But during the Fifties most switched to using photos on their covers.

There are several reasons why men’s adventure magazines held out against that trend until the late Sixties.

For one thing, like the vintage science fiction pulp magazines pulp magazines of the same era, which are also known for their great painted covers, men’s pulp mags featured wild fiction stories and equally over-the-top “true” stories that were best illustrated (or could only be illustrated) with imaginative artwork.

Trying to create photos of scenes in many of those stories would be impossible or end up looking totally lame compared to the images talented pulp artists could create.

In addition, despite how politically incorrect some men’s adventure cover paintings seem now (think scantily-clad damsels being shredded by vicious killer creatures or bound and tortured by non-white natives or demented Nazis) they were generally of less concern to official and self-appointed censors of the Fifties and Sixties than (gasp!) nude photos on or in men’s magazines. 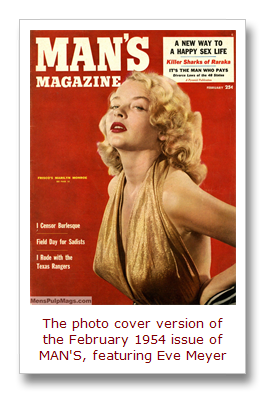 “Illustrations had always had more leeway than photographs, because classical painters and sculptors had depicted nudes; thus, a painting of a bound woman in panties being whipped by a Nazi on the cover of REAL MEN was deemed less offensive than a nude centerfold.”

That ironic observation comes from the first chapter, an excellent historical overview of the genre aptly titled “Blood, Sweat, and Tits.”

In that chapter there’s also a mention of an interesting market test that happened in 1954.

The test revealed one other simple reason why the classic men’s adventure magazines used painted covers: most of the men who bought men’s pulp mags preferred them.

As explained in the Taschen book:

“IMPACT and some other magazines ran occasional photo covers, but an experiment by STAG competitor MAN’S MAGAZINE in 1954 put an end to that. It produced its February issue with two covers: one a painting of an explorer confronting a tribe of Australian bushmen, the other a pinup photo of Eve Meyer (pneumatic bride of photographer and filmmaker Russ Meyer). Strangely enough, the explorer outsold the lovely Eve, and most he-man magazine publishers stuck to cover paintings for nearly two decades.”

Until recently, I only owned the Eve Meyer version of the February 1954 issue of MAN’S.

But a while ago, during my visit with the renowned men’s pulp art collector Rich Oberg at his home in Tennessee, Rich graciously gave me a copy of the painted cover version. (I returned the favor by giving Rich a MensPulpMags.com t-shirt that features one of the awesome John Duillo cover paintings he owns.) 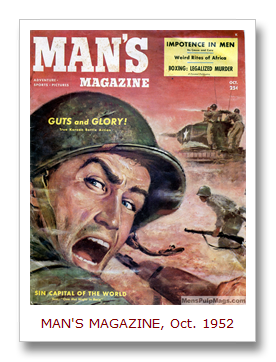 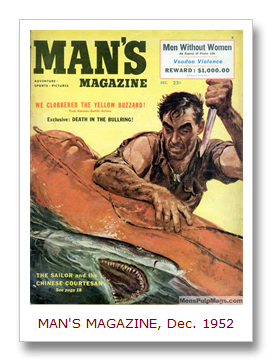 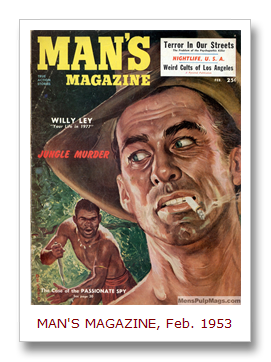 Initially MAN’S was published bimonthly in an oversize 10″ x 13.25″ format. All of the first eight issues published in 1952 and 1953 had painted covers.

MAN’S was reasonably successful during its first year-and-a-half. But by 1954 the editors wanted to find out if showing “cheesecake” photos of female models and actresses on the cover might attract more readers.

I suspect that question arose due to the recent popularity of pin-up magazines like MODERN MAN, which also began publication in 1952, and the huge splash made by the premiere issue of PLAYBOY in December of 1953. 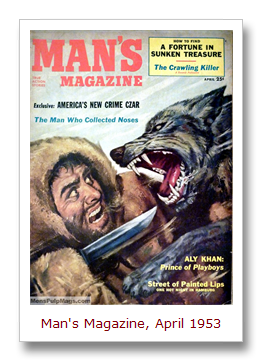 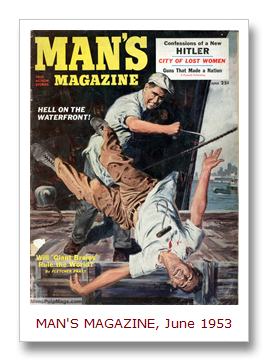 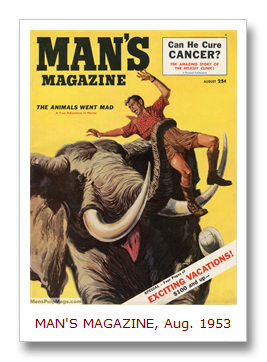 On the contents page of MAN’S February 1954 issue, the editors explained the painting vs. photo market test this way:

“WHAT KIND of a cover does a man like to see on Man’s Magazine — a stirring adventure scene painted in vivid colors or a true-to-life photograph of a bewitching woman? That’s a question that’s been giving us grey hair for a year, and now we’re putting the decision up to you. In order to determine your preference, we’re publishing this February 1954 issue with not one but two covers! Half the press run bears an exciting painting in full color illustrating the story Naked Devils and Black Magic, which starts on page 10. The other half of this issue has a terrific Kodachrome cover of luscious Eve Meyer of San Francisco (see photo left). She’s the second in our series on America’s Unpublicized Beauties, and you’ll find Frisco’s Marilyn Monroe in three fetching dimensions on page 13. You’ll find photographs of both covers above the contents on the right. Which cover do you like best? How about dropping us a line (a postcard is fine!) casting your vote for your favorite and telling us the type of cover you’d like to see on future issues of Man’s Magazine.”

It took a while for the results to become clear to the editors. They appear to have mistakenly assumed that the photo version would sell better and be more popular with MAN’S readers, since the April and June 1954 issues of MAN’S had a photo of a shapely woman on the cover.

But by the summer of 1954, feedback from readers convinced the MAN’S editors to go back to cover paintings. 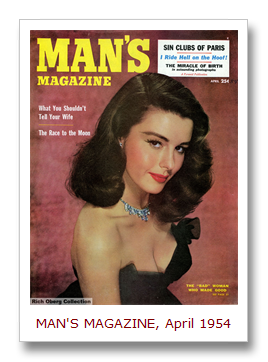 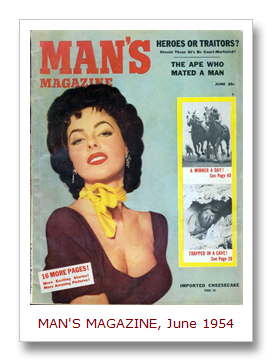 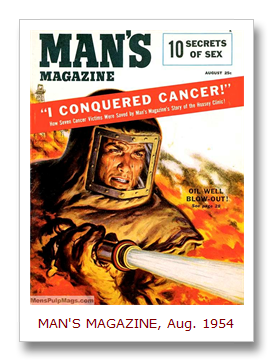 The August 1954 features a terrific action painting of a man in a special firefighting suit engulfed in flames, as he combats a raging oil well fire. From then until 1969, MAN’S featured paintings on its covers.

In the next post, I’ll give you a closer look at the stories inside the legendary February 1954 issue of MAN’S MAGAZINE.

By the way, I recently added a complete, high resolution PDF copy of that issue in my Payloadz store. You can download it for $2.99. Your purchase will give you a virtual copy of a men’s adventure magazine issue that is very hard to find in print — and it will also help keep this blog alive.