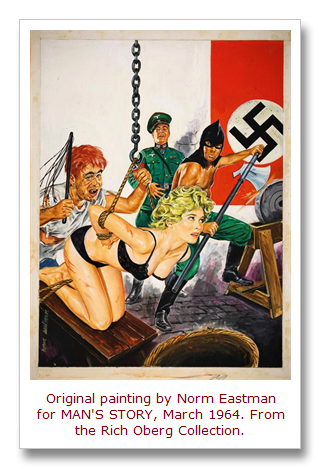 Eastman is the artist most closely associated with the so-called “sweat magazine” subgenre of men’s adventure magazines.

His cover paintings of wild bondage and torture scenes — especially those with fiendish Nazis torturing scantily-clad damsels in distress — are iconic, popular and notorious.

Indeed, Eastman covers are what many fans and critics commonly think of when they think about about the pulpy men’s adventure magazines published in the 1950s, 1960s and 1970s (despite the fact that most of the 160 or so magazines in the genre didn’t use Eastman-style bondage and torture cover paintings).

Ironically, while you can find photos of Eastman covers in a number of books and on many websites, there’s very little information about Eastman himself in print or online. 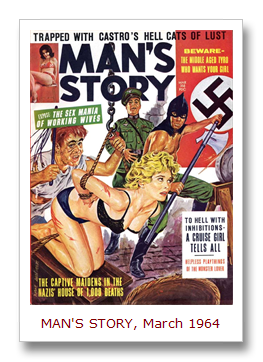 So, I’ll start this post with a brief thumbnail bio pieced together from various sources…

Norman Robert “Norm” Eastman was born in 1931 in the small Canadian town of St. Stephen, New Brunswick, “Canada’s Chocolate Town” (home of Ganong Chocolates). His first formal training as an artist was at Mount Allison University in Sackville. The early artistic talent he showed there earned him a scholarship to The Slade School of Fine Art at University College in London.

In 1954, Eastman returned to Canada, where he worked as an illustrator for various Canadian publications, including Liberty, the Canadian Ladies’ Home Journal, Chatelaine and the Toronto Star Weekly.

Around 1959, Eastman moved to New York, where he became one of many illustration artists represented by the artist and artist representative Ed Balcourt, a legendary figure in the illustration art world. (There’s a great article about Balcourt by writer and pulp art maven Gary Lovisi in Issue Number Thirty-Two of Illustration magazine, a magazine I highly recommend to readers of this blog.)

Eastman is probably best known for the cover paintings he created for men’s sweat mags published by B. R. “Bud” Ampolsk and Maurice Rosenfield (spelled Rosenfeld by some sources) through their companies Reese and Emtee, such as Man’s Book, Man’s Epic, Man’s Story, Men Today, New Man and World of Men. But he also did artwork for other major publishers of classic men’s adventure magazines, including Magazine Management and Stanley Publications. 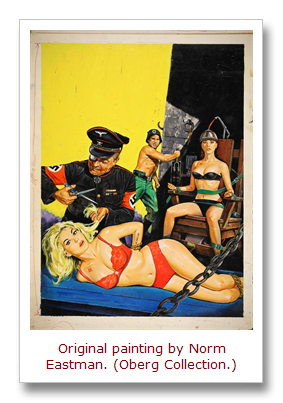 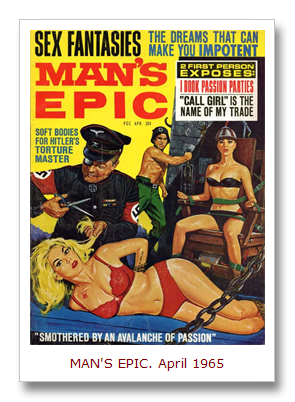 After the men’s adventure magazine genre faded away in the mid-1970s, Eastman primarily worked as a paperback cover artist. In the 1980s and 1990s, his cover paintings appeared on manly action and adventure novels, erotic “sleaze” paperbacks and even on Harlequin romance novels.
In the later decades of his life, Eastman lived with his wife Jane in Lompoc, California, where he died in 2007.
The most extensive information about Eastman that I’ve seen is in an interview he did with comics and pulp art expert George Hagenauer in 2003. It was published in the original 2004 edition of the Taschen Publishing book Men’s Adventure Magazines, which you can sometimes find in the “Collectibles” tab in its Amazon.com listing or on AbeBooks.com. Unfortunately, the 2008 edition, though still a must-have book for men’s pulp mag fans, omits the Eastman interview and a whole chapter that featured Nazi bondage and torture covers. 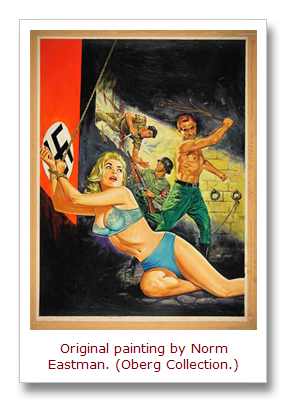 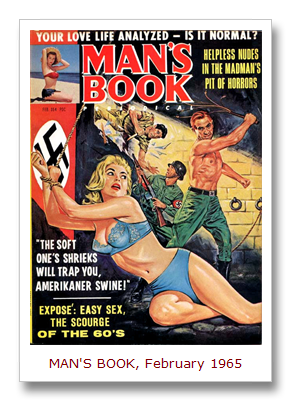 The good news for readers of this blog is that both editions of the Taschen book feature covers and original cover paintings from the Rich Oberg Collection. And, Rich is a friend and patron saint of MensPulpMags.com.
All of the cover paintings shown in this post are from Rich’s vast collection. He bought many of them directly from Eastman, who he visited in Lompoc in 2004. 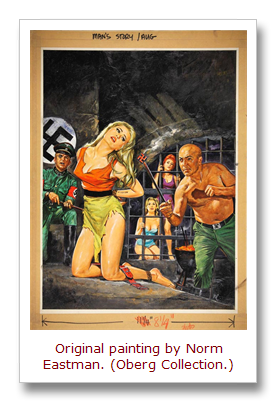 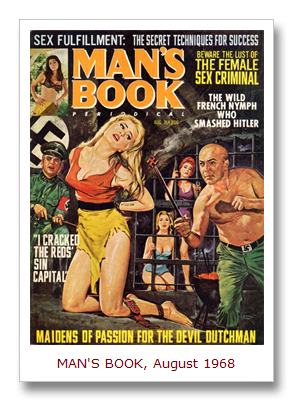 When I look at Norm Eastman paintings, I often try to guess if the distressed damsels in them are one of his favorite female models, Eva Lynd, Lisa Karan and Shere Hite. In the 1960s, all three of those lovely ladies posed regularly for reference photos used by Eastman and other New York-based illustration artists.

Eva Lynd also worked as a pinup model and an actress. For example, she was the cover model on the January 1959 issue of the bachelor magazine Modern Man. And, her acting credits include appearances episodes of Peter Gunn, The Thin Man, Hogan’s Heroes and Cagney & Lacey. She also appeared on The Steve Allen Show and had a role in the 1975 movie That Lady from Peking. 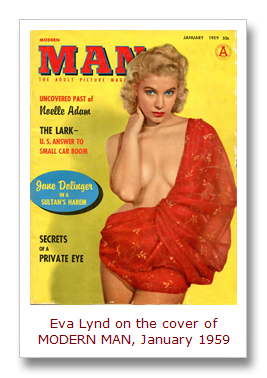 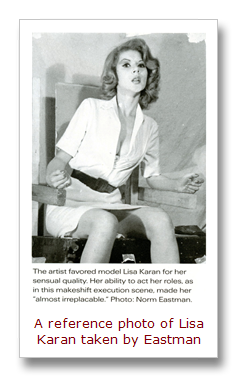 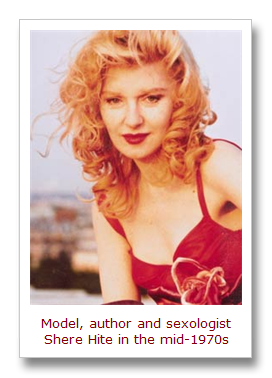 I know very little about Lisa Karan other than what Eastman said about her in his interview with George Hagenauer. “She had a nice sensual quality,” Norm noted. “She really had a shapely figure and she was good at posing.” (I wholeheartedly agree.)

Shere Hite is probably the best known of Eastman’s favorite female models. And, not just because she was a blonde bombshell. 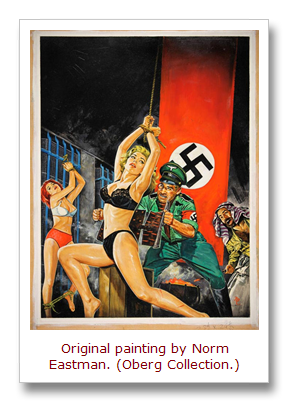 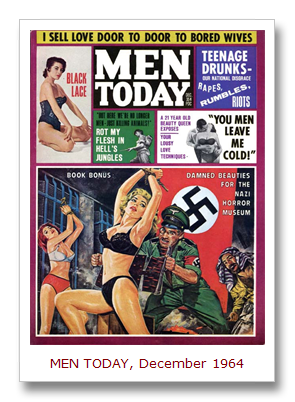 In his interview with Hagenauer, Eastman recalled: “When she [Hite] was posing, she’d sometimes ask me questions about my sex life. I wondered what was going on, but she said it was for a book she was writing…posing was helping her pay her way while she wrote.”

When that book was published in 1976, it turned out to be a bombshell of a different sort. It was The Hite Report, a pioneering study of female sexuality that catapulted Hite to international fame. She went on to write several additional “Hite Reports,” including one about male sexuality. Today, Shere Hite is still famous and controversial. (Check out this recent article about her in The Guardian.)

I have my guesses about which of the cover paintings shown in this post feature the beautiful faces and figures of Eva, Lisa and Shere. I’ll let you study them and make your own guesses.

FYI, hair color is not a clue. In his interview with Hagenauer, Eastman said: “I’d paint them with different colors of hair depending on what was needed.” 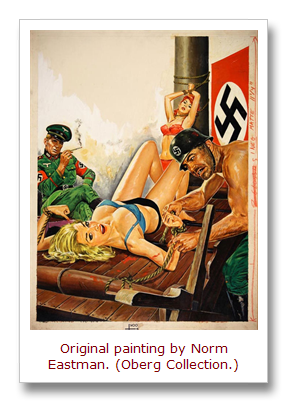 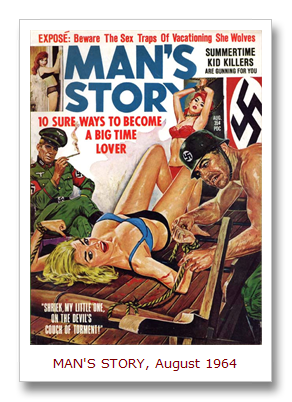 Coming up on MensPulpMags.com: more Eastman “sweat mag” paintings from the Rich Oberg Collection, plus a look at some of Eastman’s later pulp paperback covers.

BTW, this is the fourth in a series of recent posts about artists who created some of the classic sweat mag covers. In case you missed the previous posts in the series, here are links to the posts about artists Mel Crair, John Duillo, Bruce Minney, Walter Popp and Vic Prezio.