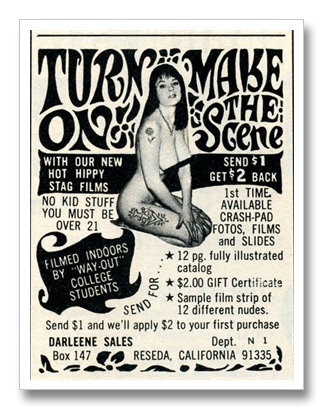 For example, many of the stories and illustrations in the August 1968 issue of Man’s Story that I featured in my previous post were probably intended to be titillating and shocking when they were published. Today, they generally seem more laughable than lurid. 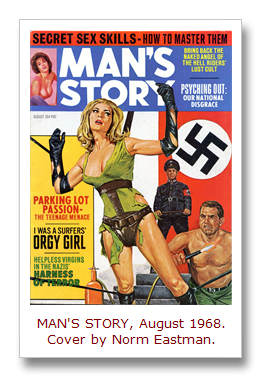 Like most men’s pulp mags, the August 1968 issue of Man’s Story has plenty of interesting vintage advertisements.

Of course, like the stories and artwork, many of them are of interest for reasons that are different than originally intended.

One ad that caught my eye was a reflection of the fact that the Hippie era was at its height (and near its end) in 1968.

The psychedelic poster-style headline in the ad urged you to “TURN ON” and “MAKE THE SCENE” — but not by dropping LSD.

If you sent $1 to Darleene Sales, Dept. N 1, Box 147 in Reseda, California, you’d get a fully illustrated catalog, plus a $2 credit toward your purchase of some of their mind-expanding “CRASH-PAD FOTOS, FILMS AND SLIDES.”

Other California companies were on the cultural cutting edge on different fronts in 1968. One was that legendary pioneer of sexy lingerie, Frederick’s of Hollywood. 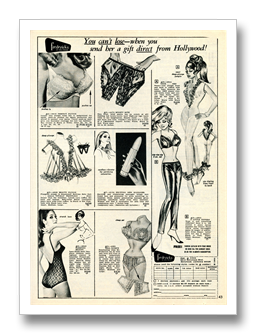 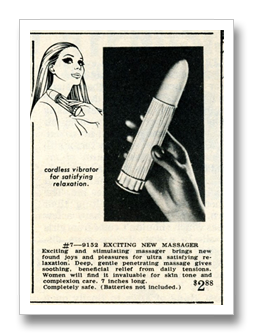 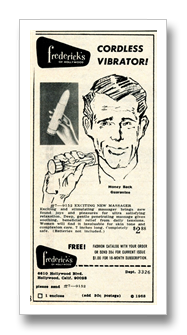 Other ads in the August 1968 issue of Man’s Story feature some gadgets I’d love to see, just out of pure curiosity. I’d especially like to see the mysterious “INSTANT SEX” product.

What the hell was it anyway? The ad for it doesn’t actually say. You had to shell out your $1 to find out (or buy 6 for $5). The ad copy did note that the Instant Sex thingy, whatever it was, was synthetic and “not designed to replace the original.” However, it would “prove to be a satisfactory substitute.”

Some other cool gadgets advertised in the same issue included the Hypno-Whirlascope, which would allow you to “transfix your subjects.” 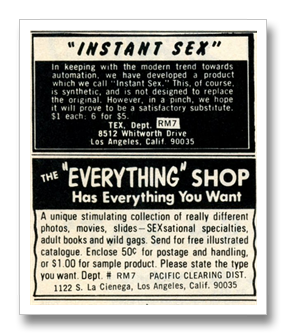 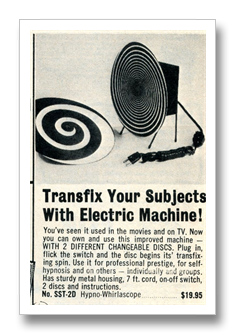 There are also ads for the legendary X-Ray Specs and the “Amazing Spy Device” that let you see through walls. 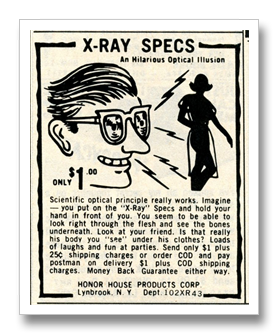 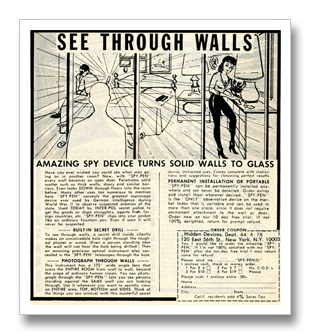 If you were planning to get married, you could send away for The Marriage Bed, a how-to book that would help you “ENJOY A SEXCESSFUL MARRIAGE.” To prevent any embarrassment, it was “shipped in a plain wrapper.” (As were many other products advertised in men’s adventure magazines.)

There’s also an ad for the Ed Sale guitar manual, which was guaranteed to teach anyone to “PLAY GUITAR IN 7 DAYS.” The photo suggests that part of Ed’s “secret system” back in 1968 was to wear a swimsuit, hat and gloves. 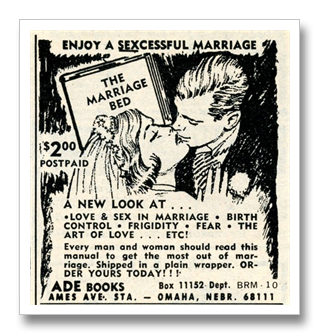 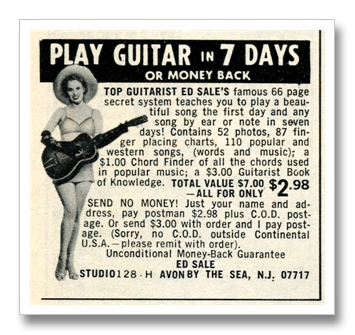 Another ad that caught my eye was an ad for the openly racist Guiding Light Club, headquartered in Fort Worth, Texas. It boasted of having “hundreds of lonely women and men who want marriage” and promised “quick results.” All ages were welcome — as long as they were “White race.”

The ad for the international pen pal organization below the Guiding Light ad was apparently more enlightened about ethnicity. Its members were from 100 countries and one of the men shown in the photos is a Negro (as “White race” folks called them back then, when they weren’t using the other N-word). 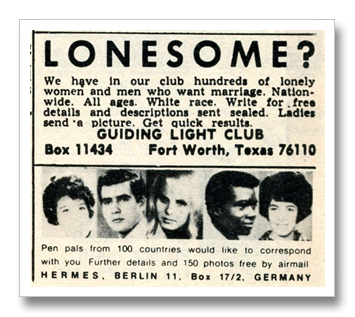 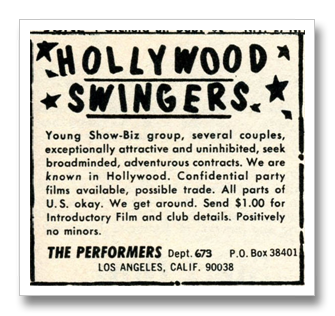 If you were already married and into the swing thing, you could check out the “HOLLYWOOD SWINGERS” club. It offered “confidential party films” featuring a “Young Show-Biz group.”

The ad claimed this group included “several couples, exceptionally attractive and uninhibited” who were “known in Hollywood.” They were open to “broadminded, adventurous contracts” if you wanted them to film something special for you and would consider a “possible trade” if you had some films of your own to swap.

Of course, there are lots of other fun-to-read ads in the August 1968 issue of Man’s Story. If you want to see more, just click this link to download the entire issue. It only costs $2.99 and your satisfaction is guaranteed. If you have any complaints about it, write me at Darleene Sales, Dept. N 1, Box 147, Reseda, California.

New recommendations: some recent and forthcoming books about illustration art and artists…