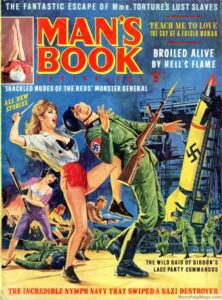 The phrase “Lace Panty Commandos” has become kind of an ongoing joke with some readers of the Men’s Adventure Magazines Facebook group that’s associated with this blog.

I think it started when I wrote a note in the FB group about a guest post done here by Tom Ziegler, author of book BRUCE MINNEY: THE MAN WHO PAINTED EVERYTHING.

One of the Bruce Minney covers paintings Tom featured was used for the June 1963 issue of MAN’S BOOK magazine.

MAN’S BOOK was a “sweat mag” style adventure magazine published from 1962 to 1971, initially by Reese Publishing Co., Inc. and then by EmTee Publications, Inc.

The story is about an American O.S.S. officer, Lieutenant Jack Gibbons, and a group of French prostitutes who are secretly members of the anti-Nazi French underground.

Together, they go on a mission to destroy a new missile being developed by German scientists in 1944.

Naturally, Lt. Gibbons and the sexy leader of the “group of young girls from the demimonde,” Helene Moulins, manage to, uh, hook up along the way (as I think young people put it today).

The phrase “Lace Panty Commandos” does not appear in the story. 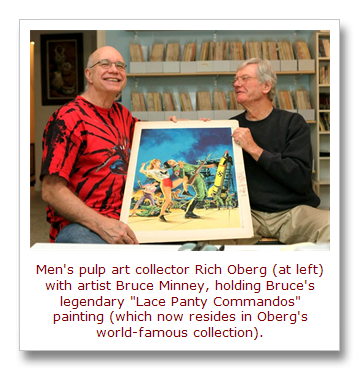 I assume it was the brainstorm of one of the magazine’s editors.

Creating gonzo story titles with attention-grabbing words and phrases was a form of art in itself in the realm of pulp publishing. And, men’s adventure magazine editors were masters of that art.

There is a mention of panties in the MAN’S BOOK story — when Helene takes hers off in preparation for her hook up with Gibbons:

“He saw the soft blush of her unblemished flesh under its scanty covering of deliciously delicate panties and bra. And then the gossamer material had fallen away and there wasn’t even this slight impediment to her passion.”

That way, they generally (though not always) avoided being officially classified as pornography, a designation that would cause the Post Office to revoke their second class mailing permit, thus eliminating the financially important option of having mail subscribers. (The yanking of this mailing permit, for some pretty absurd reasons, did kill off several men’s pulp mags, such as GUSTO.)

In his book about Minney, Tom Ziegler includes Bruce’s recollection of the painting he did for the “Lace Panty Commandos” story.

Bruce laughed when he saw it and told Tom:

“The V2 rocket in the background is a bit phallic, but it’s a strong composition. I don’t remember who the female model was…This was one of the few times that the woman wasn’t being rescued or tortured. She’s really kicking that guy’s butt.” 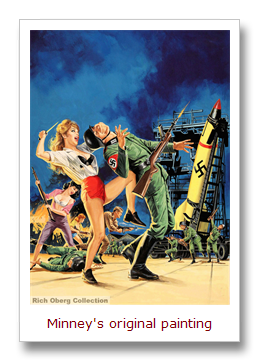 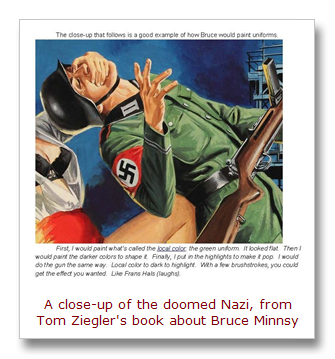 Indeed, she does more than kick his butt in the story. She slits his jugular vein with the knife she’s wielding.

In a caption for a close-up of the doomed Nazi in the book, Bruce explains his approach to painting uniforms:

“First, I would paint what’s called the local color: the green uniform. It looked flat. Then I would paint the darker colors to shape it. Finally, I put in the highlights to make it pop. I would do the gun the same way. Local color to dark to highlight.  With a few brushstrokes, you could get the effect you wanted. Like Frans Hals.”

Tom said Bruce laughed again as he compared his technique to that famed 17th-Century Dutch painter Hals, realizing that some art snobs would scoff at such an association. But, in fact, the realistic style of 20th-Century pulp illustration art actually is a descendant of the style of earlier European realists like Hals.

Not long after Tom did his guest post here, I ran across a reprint of the MAN’S BOOK story about them. 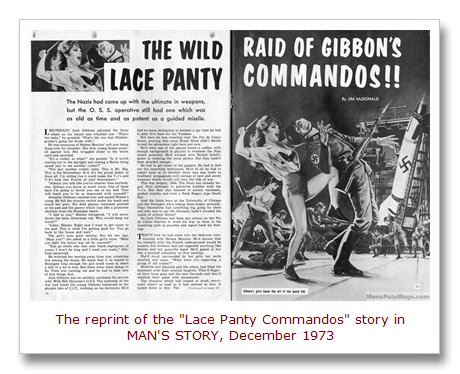 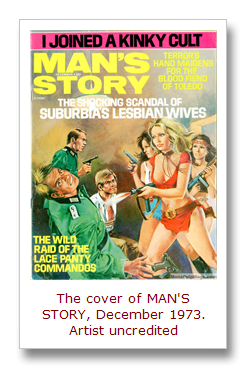 It’s in the December 1973 issue of MAN’S STORY (which includes one of the stories I featured in my series about the depiction of lesbians in men’s adventure magazines).

The version in MAN’S STORY, also a Reese/EmTee magazine, is exactly the same as the one in MAN’S BOOK and is illustrated with the same painting by Minney.

Shortly after I posted a scan of the 2-page spread of this reprint in the Men’s Adventure Magazines Facebook group, Tom Ziegler posted another Minney cover, with the comment: “I guess Lace Panty Commandos were everywhere in WWII.”

It was the cover of the March 1963 issue of WORLD OF MEN, another classic Reese/EmTee publication. The cover painting by Minney shows an American GI blowing up Nazi military vehicles with dynamite, as three babes bearing carbines and wearing colorful low-cut blouses provide cover fire.

The title of the story it goes with is “THE DESPERATE RAID OF WILSON’S LACE PANTY GUERILLAS.” Obviously, those ladies were forerunners of the Lace Panty Commandos. 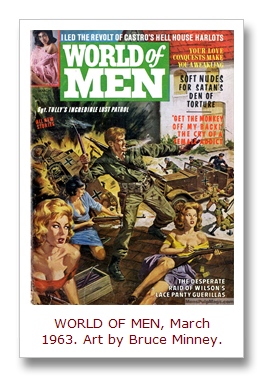 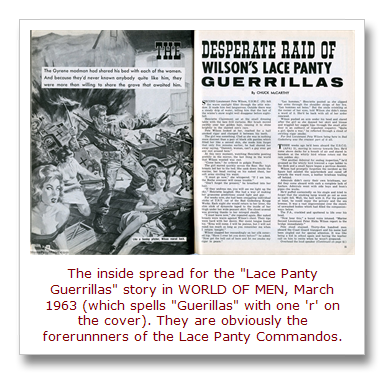 In a quote on the page in Tom’s book that features this WORLD OF MEN cover, Bruce Minney notes that models he used were the great Steve Holland (a favorite of many pulp magazine and paperback artists) and Lisa Karan (a favorite female model of both Bruce and Norm Eastman, who also did many cover paintings for the Reese and EmTee magazines.) 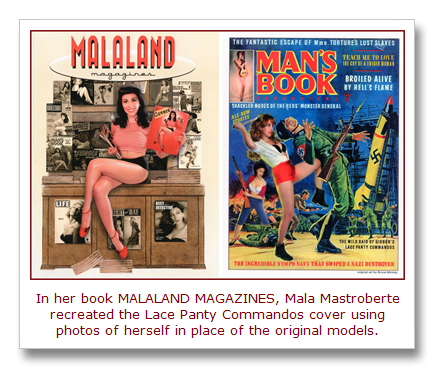 Not long after Tom mentioned the Guerilla predecessors of the Lace Panty Commandos in the MAM Faceboook group, I posted a scan there of the May-June 1953 issue of HIS magazine. One of its cover stories is “THE MAN WHO BECAME A WOMAN.”

In a comment on that post, group member Dan Leo (writer of the highly addictive, neo-pulp “Railroad Train to Heaven” series) joked: “In fact he became a Lace Panty Commando.”

Recently, the increasingly legendary Lace Panty Commandos showed up in yet another incarnation.

This time they’re in the new book by photographer/artist/model Mala Mastroberte, MALALAND MAGAZINES, which I wrote about here in a previous post.

Mala uses her camera and Photoshop skills to insert pictures of herself in the place of the women on vintage magazine and pulp paperback covers.

One of the recreations of men’s adventure covers in MALALAND MAGAZINES is Mala’s version of the June 1963 issue of MAN’S BOOK.

That’s her in the place of all three of the battling babes in the Minney painting and in place of the model in the inset panel at upper left (holding a strategically-placed guitar).

So, the saga of the Lace Panty Commandos continues. Yes!

By the way, here are links where you can download complete high resolution PDF copies of both of the vintage men’s adventure magazines these courageous French freedom-fighter floozies appeared — the June 1963 issue of MAN’S BOOK and the December 1973 issue of WORLD OF MEN.