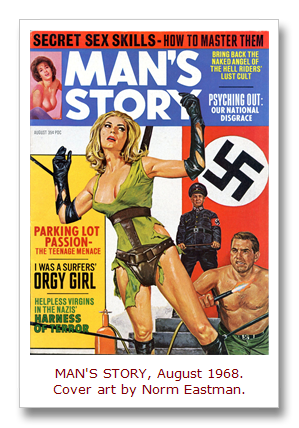 Last night, after watching an episode of the Showtime TV series Dexter, I went to bed and read the August 1968 issue of Man’s Story magazine (Vol. 9, No. 4).

The juxtaposition of the two got me chuckling over the fact that some people call men’s adventure magazines like Man’s Story “pornography.”

As you probably know, Dexter Morgan, the central character of Dexter, is a serial killer who is portrayed sympathetically. (He only kills “bad” serial killers and other sickos who deserve it and he loves his family as much as any sociopath can.)

Dex seemed almost heroic in the most recent season, during which he rescues a young woman who was tortured and gang-raped — and then methodically captures and kills the pervs who did it, one by one.

Most episodes of Dexter include some very graphic, very bloody violence. There’s plenty of explicit language (lots of F-bombs, anatomically-oriented slang, etc.). Many episodes have nudity. Many have scenes showing bondage, torture and mutilation. 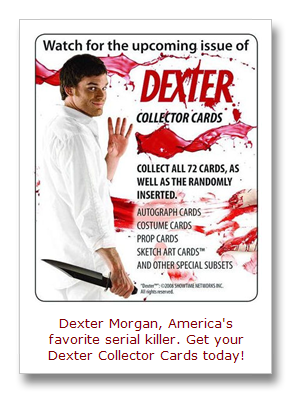 I pondered that as I was reading the August 1968 issue of Man’s Story last night.

Like many issues of Man’s Story, it features what is often described as a “lurid” Nazi bondage and torture cover painting. The painting was done by Norm Eastman, a legendary men’s pulp mag artist who later painted covers for romance novels.

Eastman’s cover painting goes with the fictional story inside “HELPLESS VIRGINS IN THE NAZIS’ HARNESS OF TERROR.” The story is about the effort to convict a Gestapo officer of war crimes after World War II. A woman who comes forward to testify against him tells how he suspended her with the weird “harness of terror” and brutally tortured her. In the end, the Nazi gets his just desserts.

Now, as you can see, there’s no nudity in Eastman’s cover painting. And, no blood. The story itself has no explicit anatomical or sexual language and no F-bombs. The descriptions of the torture are gripping but not graphic. And, the Nazi who does the torturing is portrayed as a despicable fiend. Not someone you might actually like or identify with.

Bottom line: the Man’s Story cover painting and the story it goes with are nowhere near as sexually explicit or gory as a typical episode of Dexter — or many other current TV shows. Nor is anything else in most men’s adventure magazines.

There are some racy fiction stories in the August 1968 issue of Man’s Story, but none that qualified as “pornography” under the relatively puritanical laws in effect back then, let alone now. One is the noirish tough-guy P.I. vs. bad bikers story “BRING BACK THE NAKED ANGEL OF THE HELL RIDERS’ LUST CULT.” It includes a scene in which motorcycle gang members “pull a train” on a young socialite that the P.I. later saves (and “makes love” to, of course). 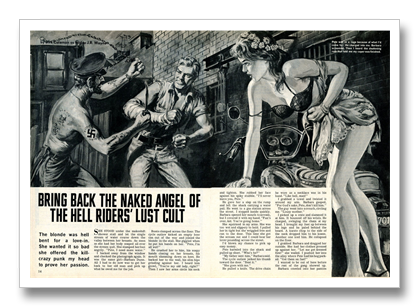 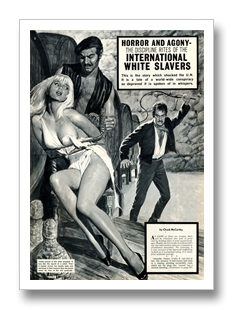 That’s followed by “the story which shocked the U.N.” It’s “a tale of a world-wide conspiracy so depraved it is spoken of in whispers.” It’s a yarn with love slaves and whips, delicately titled “HORROR AND AGONY – THE DISCIPLINE RITES OF THE INTERNATIONAL WHITE SLAVERS.”

There’s also a tongue-in-cheek Western, titled “LOVE ME TO DEATH — THE INCREDIBLE REVENGE OF COLORADO KATE,” in which a saloon whore gets revenge on the guy who killed her boyfriend by literally “loving” him to death. It was written by the amazingly prolific pulp writer Dean W. Ballenger (1913-2005), who wrote many stories (probably hundreds) for men’s adventure magazines and dozens of pulp paperback novels. The majority were published under Ballenger’s own name. But he also used various pen names, including Philip J. Arminas, Warren S. Cargett, Philip Chivington, Wilbur Dane, Keith J. Erlwanger, Dale P. Flores, Oscar Foley, L. J. Garfield & Walter Garrett. 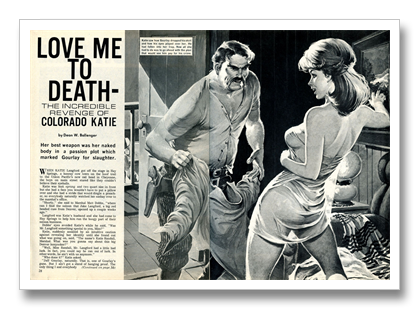 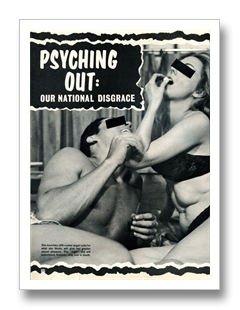 As usual in men’s pulp mags, this issue of Man’s Story also includes several wild exposé and sexposé articles. One is a story about the hazards of LSD and other psychedelic drugs, titled “PSYCHING OUT: OUR NATIONAL DISGRACE.” (Click this link to see some of my favorite mind-bending vintage stories about LSD and other illegal drugs.) 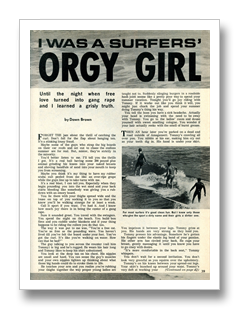 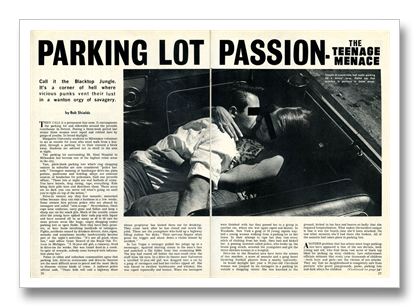 The August 1968 issue of Man’s Story also includes several cheesecake photo spreads. Most notable is the one featuring model and actress Judy Crowder. Photos of Crowder appeared in a number of men’s magazines in the Sixties and in some classic “art photo” books. (Click this link and scroll up a page to see the great shot of her in a book by the talented glamour girl photographer Peter Gowland.) Crowder also appeared in a few TV shows, including a 1961 episode of The Adventures of Ozzie & Harriet.

Like most cheesecake photos in men’s adventure magazines published in 1950s and 1960s, there’s no full frontal nudity in the Crowder pics. 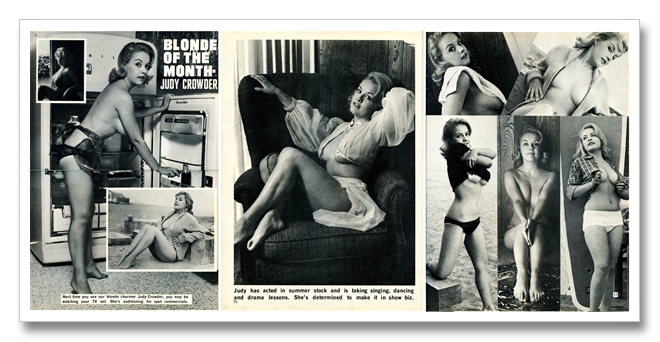 But I do understand why some people are offended or disgusted by things like the Nazi bondage and torture cover paintings and stories, even though those tend to be far less graphic or “pornographic” than what’s in today’s media. I also understand why some people are offended by the casual sexism, racism, xenophobia, homophobia and other politically incorrect aspects of men’s adventure magazines, even though those aspects simply reflect common attitudes and prejudices of the era.

And, that’s why there’s “Content Warning” on this blog — even though you won’t find any real pornography here. (Sorry, guys.)

BTW, Man’s Story was published bimonthly from February 1960 to December 1975 by EmTee Publications, Inc., which had editorial offices at 201 Park Avenue South in New York City.

In my next post, I’ll take a closer look at some of the kooky ads in the August 1968 issue of Man’s Story. In the meantime, you can click on this link to download the entire issue in high–resolution PDF format.