Not long ago, I stumbled across a post about men’s adventure magazines on another blog that is now among my favorites.

It’s the blog Love Train for the Tenebrous Empire, an exploration of things: “Lurid. Weird. Fantastique.”

The author, Tenebrous Kate, writes very witty and interesting posts about new and vintage movies, magazines and other things that strike her fantastique fancy or suit her tenebrous tastes.

Tenebrous is not a word you see much nowadays. It’s an old word that means “dark and gloomy.” It shows up, among other places, in the works of classic horror writers like H.P. Lovecraft. I’m also a fan of Lovecraft and other such tenebrous stuff. So, when I saw the name of Kate’s blog, I figured I might love it – and I do.

It was especially cool to see her posts about two of my personal favorite subjects – men’s adventure magazines and the bizarre story of Count von Cosel and Elena Hoyos, a legendary tale of necro-love from my local town, Key West. (There are a couple of good books about this VERY strange but true story, Undying Love: The True Story Of A Passion That Defied Death

by Ben Harrison and Von Cosel

– an excellent overview of the men’s adventure magazine genre that I’ve mentioned here in previous posts. 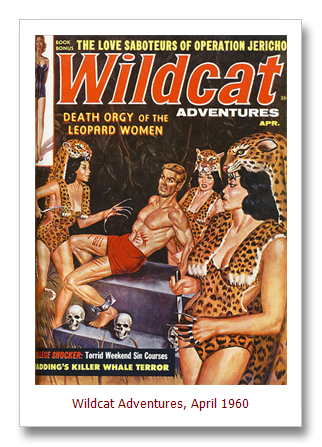 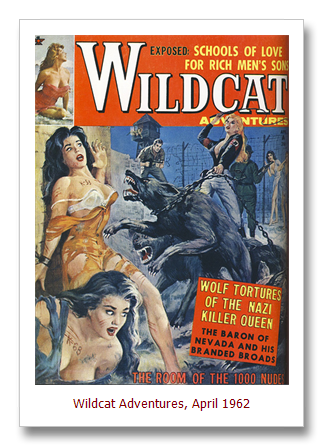 Wildcat was published from 1959 to 1964 by Candar Publishing, which also published several other men’s adventure magazines, including Daring, Man’s Action, Man’s Daring, and Man’s True Danger.

As Tenebrous Kate put it in her post, “Wildcat Adventures appear to be the best KIND of adventures, just brimming with boobs and bondage.” (Agreed, Kate.)

If you like my Men’s Pulp Mags blog, I think you’ll like Kate’s blog Love Train for the Tenebrous Empire.

I highly recommend it.