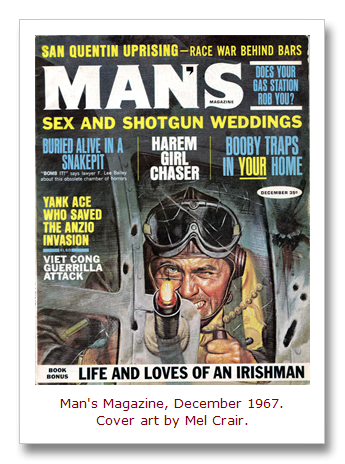 The best men’s adventure magazines not only used illustrations by great artists, they also published stories and articles written by some excellent writers. Consider, the December 1967 issue of Man’s Magazine…

Mel Crair provided one of his superb action paintings for the cover story — “Yank Ace Who Saved the Anzio Invasion.”

And, that story is by an author who later became a top military historian, Robert F. Dorr.

Since the mid-1970s, Dorr has written 70 history books and literally thousands of non-fiction articles about World War II, the Korean War, the Vietnam War, military aviation and international affairs.

His latest book is Hell Hawks!: The Untold Story of the American Fliers Who Savaged Hitler’s Wehrmacht, co-written with former U.S. astronaut Thomas D. Jones. It tells the aerial “Band of Brothers” story of the 365th Fighter Group — the P-47 Thunderbolt pilots and crews who played a vital role on the European front during World War II.

Before Dorr became a critically acclaimed author of history books, he honed his skills by writing stories for men’s adventure and “bachelor” magazines in the 1960s and early 1970s.

Bob recently approved an exclusive reprint of his classic “Yank Ace” story here on The Men’s Adventure Magazines Blog. You can read “Yank Ace” by clicking this link and downloading the entire story in PDF format. (Also be sure to check out the other Bob Dorr stories reprinted elsewhere on this blog, a terrific Korean War story and a ripping yarn about a rogue polar bear.)

Last week, I had the opportunity to talk to Bob by phone. I asked him how the “Yank Ace” story fits into his awe-inspiring body of work. 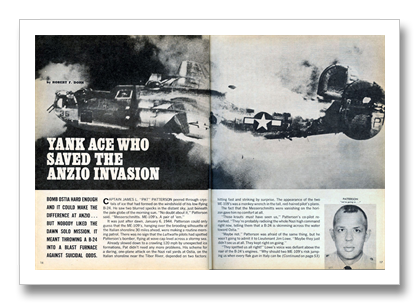 “I look at my ‘Yank Ace’ story from 1967 and see the beginnings of a career writing about the experiences of wartime veterans,” Bob said. “The military history books I’ve written, like Hell Hawks!, are direct descendants of the war stories I wrote for the men’s adventure magazines many years ago.

Right now, I’m writing a new book about the B-17 ‘Flying Fortress’ crews. The ‘Yank Ace’ story is about a pilot who flew the other World War II bomber, the B-24 ‘Liberator.’ B-24s aren’t as well known as B-17s, but there were actually even more of them and they served everywhere during World War Two.”

Bob said his new book about WWII bombers and their crews has a special focus on the historic mission to Berlin on February 3rd, 1945. He’d like to hear from anyone who has information about that event. If you do, email Bob at robert.f.dorr@cox.net.

Bob’s “Yank Ace” story is a good example of the war stories he wrote for men’s adventure magazines in the Sixties and early Seventies. It’s a gripping read. And, it provides a vivid glimpse of how dangerous and scary it was to be a pilot or crew member of a bomber in World War II.

“Yank Ace” is just one of the stories in the December 1967 issue of Man’s Magazine that was written by a notable author.

This issue includes a Vietnam war story by another respected military historian, Glenn Infield, a story by the controversial and best-selling Irish novelist Lee Dunne, and an exposé by former Boston Globe reporter George W. Rae, who wrote one of the best books about the “Boston Strangler” in the 1960s.

There’s also an article by Tedd Thomey, the author of a long list of popular non-fiction books and pulp fiction mystery and crime novels. More to come about those authors and their stories in the December ‘67 issue of Man’s Magazine in the next post… 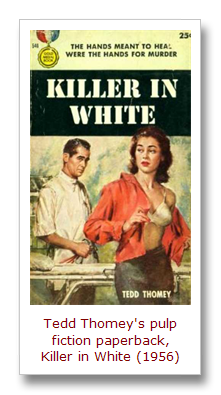 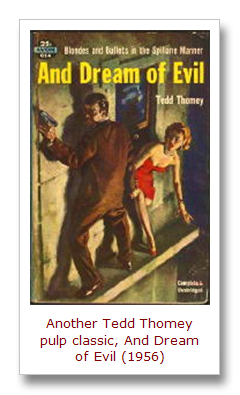