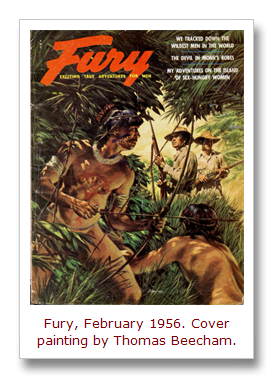 Beecham also did outstanding cover art for other vintage magazines created by bodybuilder Joe Weider and his brother Ben, such as Fury.

Fury was a more typical men’s adventure mag, subtitled “EXCITING TRUE ADVENTURES FOR MEN.” It was published from October 1954 to May 1961.

Two of my favorite Beecham covers for Fury are shown in this post.

The first, from the February 1956 issue, is a good example of Beecham’s masterful use of light and shadow and his ability to create a superb exotic adventure scene.

It’s for a story inside titled “Seeking the Wild Men” (promoted on the cover with the cover line “WE TRACKED DOWN THE WILDEST MEN IN THE WORLD”).

The second is the cover Beecham did for the February 1957 issue of Fury. 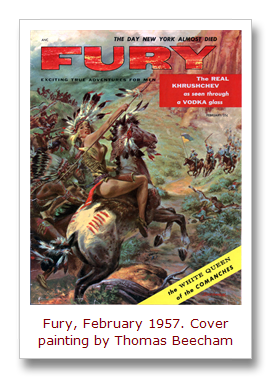 It’s an enticing slice of faux American history done men’s adventure style, depicting a scene for the story “WHITE QUEEN of the COMANCHES.”

Beecham was born in Texas in 1926 and died in 2000. After serving in the Navy during World War II, he studied art at The St. Louis School of Fine Arts. In 1951, he moved to New York, where he worked for a long list of publishers and advertising agencies.

In addition to providing art for men’s adventure magazines, Beecham did covers and illustrations for mainstream magazines like Reader’s Digest, National Geographic, Outdoor Life, and Field and Stream, and covers for paperback books.

You can see some other nice high-resolution scans of Beecham’s cover art for magazines and paperbacks on the excellent American Art Archives site.

In the final decades of his career, Beecham was primarily known for his western and wildlife paintings.

He was one of the artists whose work was featured on Remington calendars, the long-running and still-published calendars distributed by the Remington Arms Company.

There’s a beautifully illustrated book showing paintings from these calendars, titled The Art of Remington Arms.

You can also see many examples of the work that Tom Beecham and other artists did for Remington by visiting the Remington Virtual Art Museum. It’s definitely worth a visit if you like wildlife art, hunting art or vintage illustration in general. The Remington collection is the single largest collection of sporting and wildlife related art in the world.

The write-up there on Beecham’s long tenure as a Remington artist says:

“In 1971 when Tom Beecham signed on to succeed Bob Kuhn as the artist for Remington Calendar, no one could have foreseen that it was the beginning of a run that would last three decades and result in 348 paintings…Over the years Beecham’s involvement with the Remington Calendar, its focus gradually shifted away from scenes with an explicit hunting/shooting element to what might be called ‘pure’ wildlife scenes. This was a reflection on America’s changing – and increasingly conflicted attitudes about hunting…He was creating new paintings for the 2001 calendar when his heart finally gave out. The 2001 Remington Calendar; graced by the six paintings Beecham completed for it, was dedicated to his memory.” 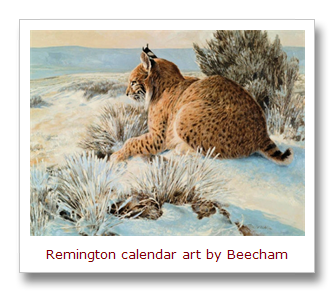 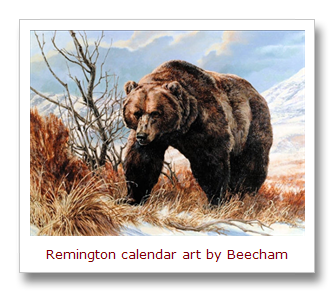 An interview with Luis Ortiz, co-editor of CULT MAGAZINES: A to Z