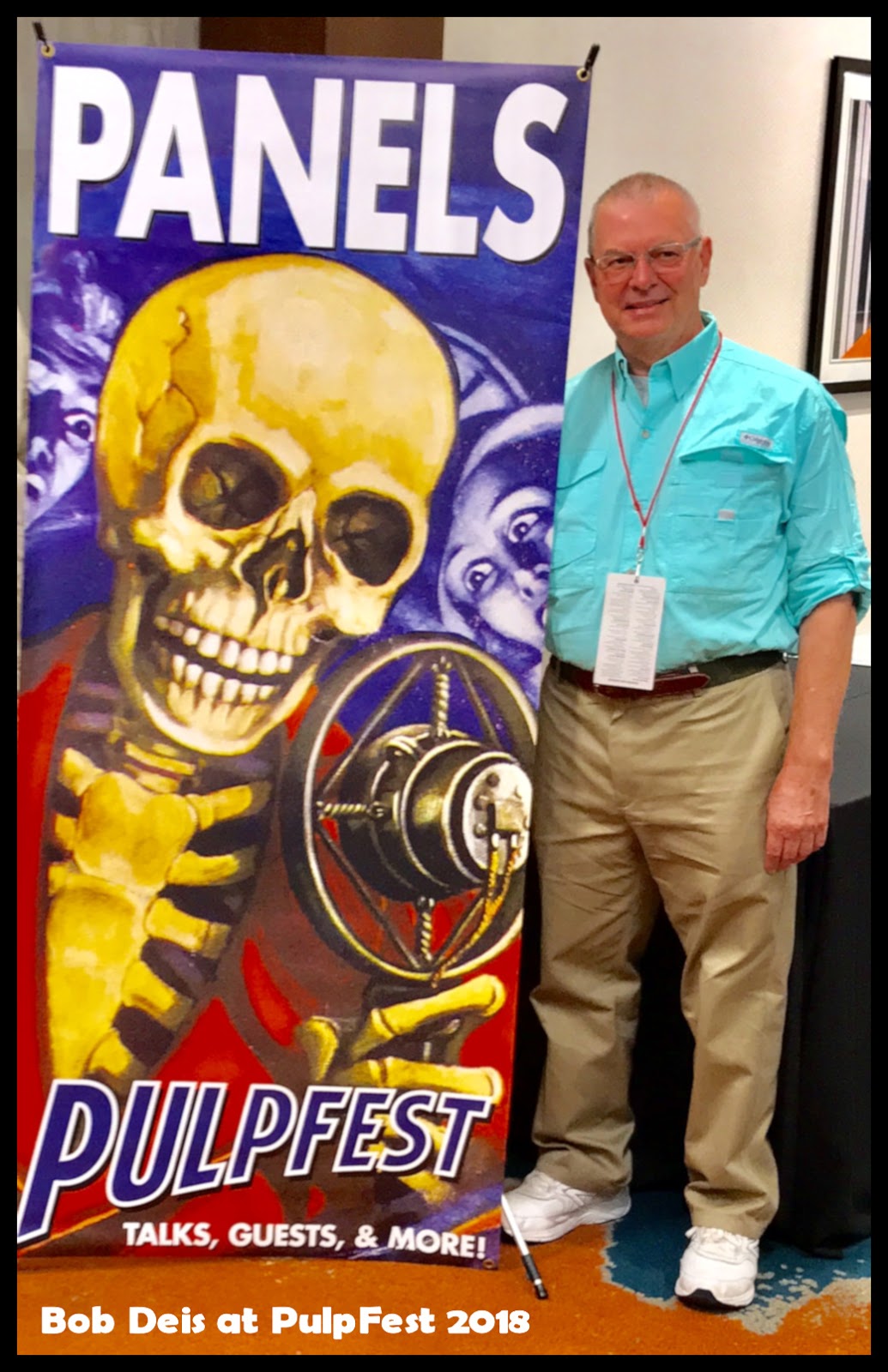 My previous post on this blog reprinted the first half of the presentation I made with my publishing partner Wyatt Doyle at last year’s PulpFest.

In case you don’t know about it, PulpFest is one of the biggest and best annual pulp-related conventions in the country.

Since the theme for that year’s presentations was “The Pulps at War,” we put together a set of overheads about the war stories and artwork in men’s adventure magazines and the thematic, artistic and literary DNA they share with the pre-World War II pulp magazines.

In the second half of the presentation, I spent some time talking about the men’s adventure mag BATTLE CRY.

When it was launched by Stanley Publications in December 1955, it was specifically designed to appeal to veterans of World War II and the Korean War and active duty servicemen.

In fact, military veterans and servicemen were the key target audience for most of the scores of men’s adventure magazines launched in the 1950s.

There were about 20 million of them at the time.

As noted by vintage magazine expert David M. Earle, author of the excellent book ALL MAN!: HEMINGWAY, 1950s MEN’S MAGAZINES AND THE MASCULINE PERSONA, men’s adventure magazines were not merely a source of entertainment for those men.

In an interview I did with David several years ago, he told me:

“The end of the war was obviously a happy time, but also a very traumatic time: a difficult shift to a postwar economy, pressures of suburbanization, the simple difficulties of readjusting, and even the difficulty of expressing, to your family and yourself, the experience of war. Men’s adventure magazines like BATTLE CRY featured stories by and about vets, soldiering, battle. They offered columns for reuniting with former war buddies. They returned men to the camaraderie of soldiering, but in a safe place. The stories about war provided a text and narrative for vets to identify with. This is one of the important parts of healing for PTSD, hence why ‘rap sessions’ were implemented for vets returning from the Vietnam War. Audie Murphy, the World War II hero who became a famous actor, wrote an amazing story about this for BATTLE CRY in 1956 that was instrumental in breaking the previous taboo about discussing war-related mental problems.” 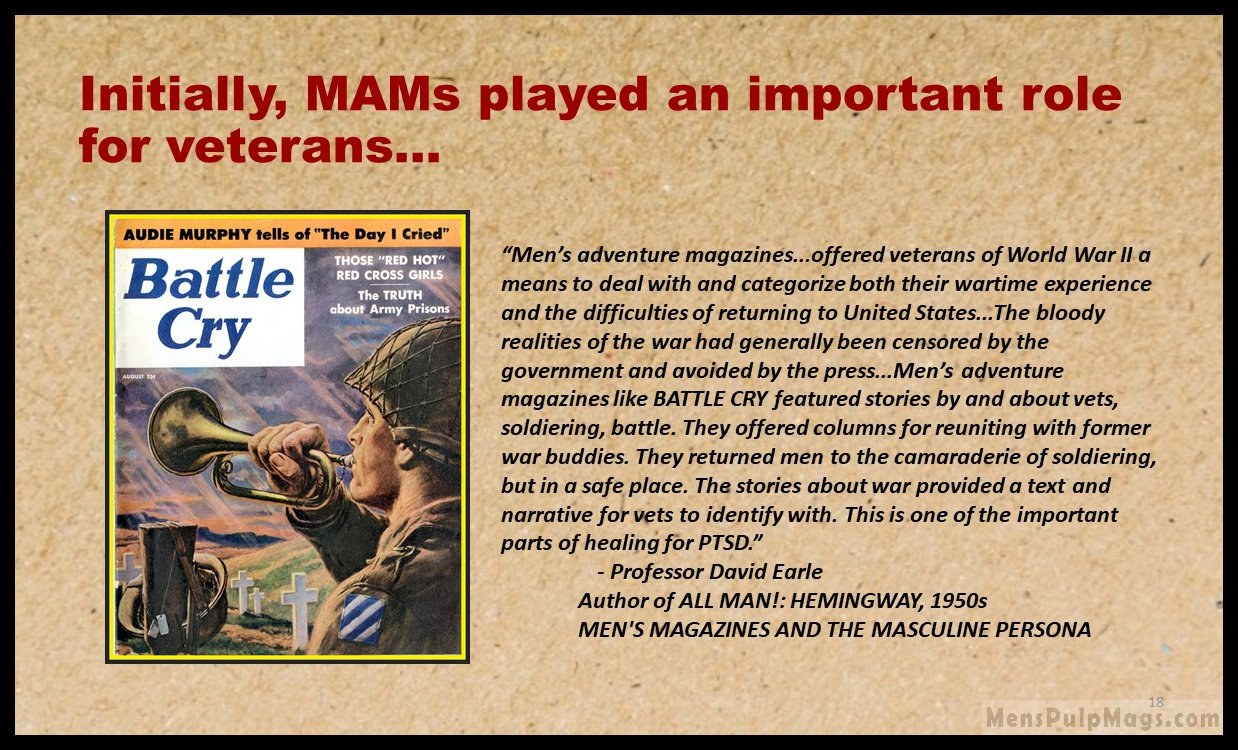 Earle also had some interesting insights about some more extreme aspects of men’s adventure magazines, like the animal attack yarns featured in our book I WATCHED THEM EAT ME ALIVE and the now very politically incorrect Nazi bondage and torture stories and covers.

“All of the men’s adventure mags featured stories about men facing extreme situations.” Earle noted. “In addition to battle stories, there were other themes of men in extreme situations – men vs. animals, Nazis, nature, etc. Some of those may now appear ridiculous, but at the same time such fantastic situations make traumatic reality codifiable. One can deal with the tensions of the real world in a safe fantasy world of fiction. In the 1890s, adventure romances by authors such as H. Rider Haggard, Bram Stoker, and A. Conan Doyle, were incredibly popular because they allowed readers to deal with the tensions created by urbanization, industrialization, scientific advances, and globalization. Something similar was going on in America in the 1950s and this is one reason why men’s adventure magazines were so popular.”

Many men’s adventure mags, including BATTLE CRY, got even wilder and crazier in the ‘60s and ‘70s. But certain elements remained common.

Most kept the tradition of using painted covers and continued to publish at least some war stories in almost every issue.

Of course, war stories were also common in the pre-WWII pulp fiction magazines. But many MAM war stories tend to be grimmer, grittier, bloodier than war stories in the pulps.

Moreover, unlike war stories in pulp mags, almost all of which are fiction, roughly half or more of the war stories in MAMs are non-fiction or fact-based stories that are portrayed as true.

That’s one of the key differences between these related genres.

Men’s adventure magazines had a mix of fiction stories and fact-based non-fiction articles and news columns.

MAMs also perfected the art of creating fictional stories that were portrayed as being true.

In fact, many war, action and adventure stories in men’s adventure magazines are faux true stories – fictional stories that are touted as true in headlines and subhead, written as if they were true, and dressed up with photographs that are portrayed as actual photos of the characters, scenes and events in the stories. 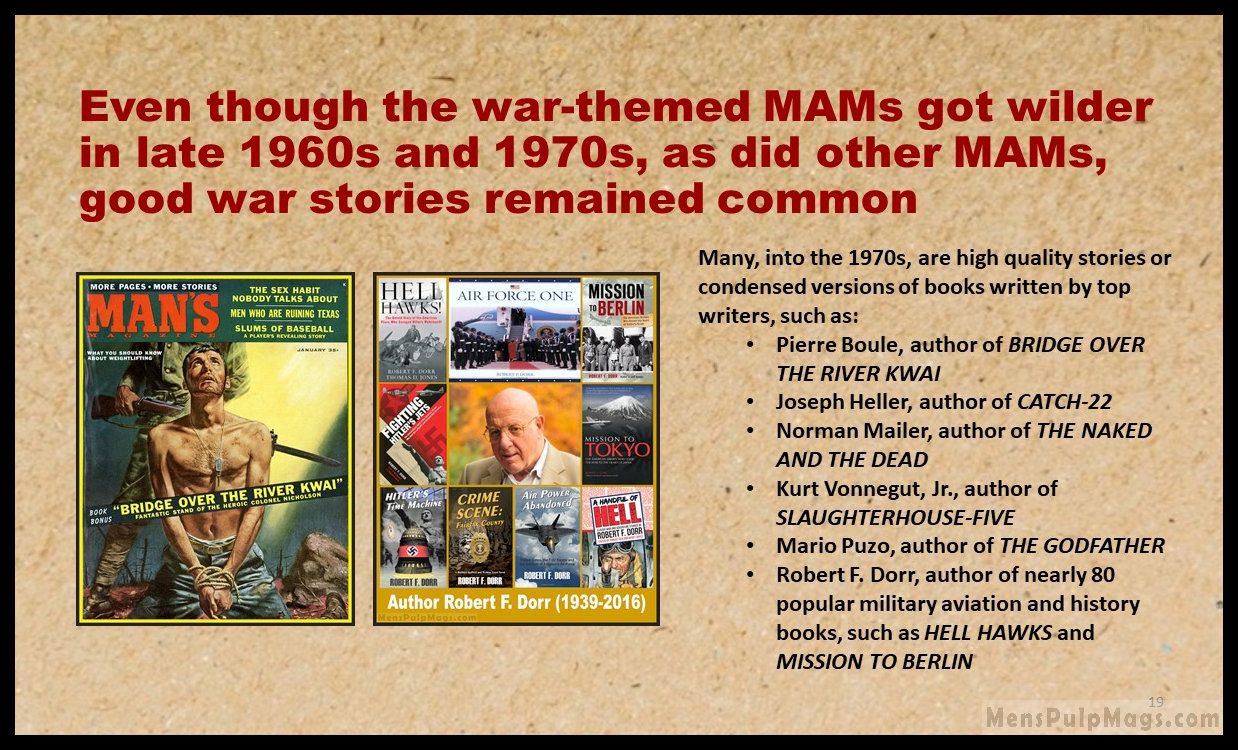 A lot of the best fiction stories in MAMs are war stories that are based on or reflect real firsthand experiences of veterans.

Some are high-quality fiction stories or condensed versions of novels written by top writers, such as:
– Pierre Boule, author of BRIDGE OVER THE RIVER KWAI;
– Joseph Heller, author of CATCH-22;
– Norman Mailer, author of THE NAKED AND THE DEAD;
– Kurt Vonnegut, Jr., author of SLAUGHTERHOUSE-FIVE;
– Mario Puzo, author of THE GODFATHER; and,
– Robert F. Dorr, author of dozens of popular military aviation and history books.

In fact, for many professional writers, as well as for many illustration artists, men’s adventure magazines were an important source of basic or supplemental income. And, many good writers, like Puzo and Dorr, wrote war stories specifically for MAMs.

They were a consistent element of the MAM genre, from the late ‘40s to the genre’s demise in the late ‘70s.

Most MAM war stories are about World War Two and Korea.

But there were also many about the Civil War, some about World War One, and some about colonial wars, especially those in Middle East countries that involved the Foreign Legion (which was also a popular topic of many early pulp magazines).

It’s also worth noting that, from the mid-‘60s to the late ‘70s, MAMs were one of the few men’s mag genres that regularly published stories about the Vietnam War that tended to be either clearly supportive of the war or at least highly respectful of the sacrifices and bravery of the men and women who served in that war, in the same manner the stories about World War Two and the Korean War did.

As I noted in a post I wrote shortly after Bob passed away in 2016, he wrote hundreds of stories for various men’s adventure magazines. 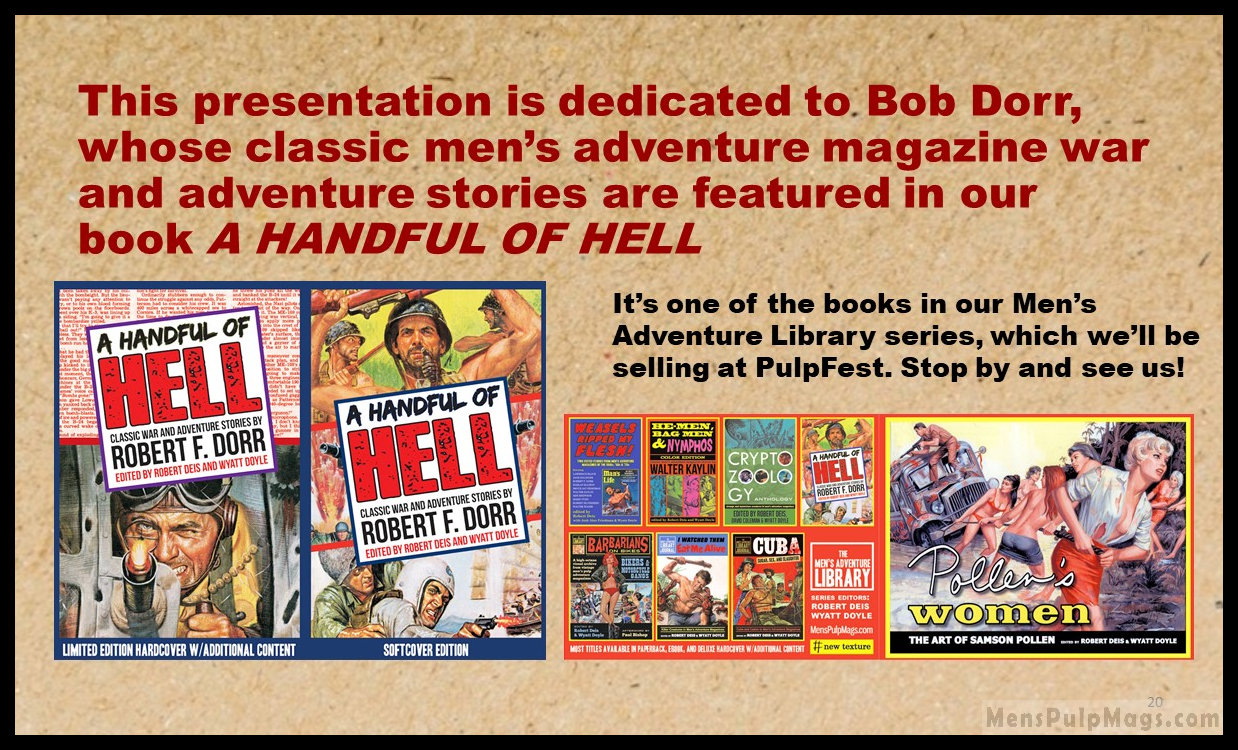 After that genre faded away, he went on to become one of the top military aviation journalists and historians in the world.

He wrote thousands of articles that were published military and aviation periodicals and history magazines, and nearly 80 military aviation history books.

I had the good fortune of getting to know Bob several years before he died.

Wyatt Doyle and I had the honor of working with him to publish an anthology of his war and adventure stories from men’s adventure magazines. It’s titled A HANDFUL OF HELL, after one of the stories in the book.

That story is about Air Force Staff Sergeant Henry “Red” Erwin. It was first published in the men’s adventure magazine CLIMAX, in October 1962.

As Bob Dorr explains in the story, Erwin saved the lives of his fellow B-29 crew members during the major firebombing mission over Japan on April 12, 1945. During the mission, a phosphorous bomb ignited prematurely while still inside the plane.

Erwin picked up the white-hot, flaming bomb — a literal handful of hell — and managed to shove it out of the plane. He was horribly burned in the process, but survived. For that incredible act of bravery, he was awarded the Medal of Honor.

If you want to read some of the best true war and fictional stories written for MAMs or any other genre, I highly recommend the Dorr anthology. Wyatt and I dedicated our 2018 PulpFest presentation to Bob.

This year’s, PulpFest will be held in Pittsburgh from August 15th to 18th this year. We’ll be there selling and signing books. We’ll also be doing another presentation that I’ll provide a look at it in a future post.

If you come, please stop by the Men’s Adventure Library table and say ‘hi.’