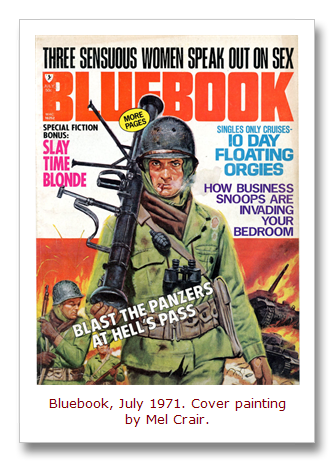 By the early ‘70s, the men’s adventure magazine genre was dying out, largely due to competition from more sexually explicit men’s magazines.

“The market slid ever crotchward,” as Josh Alan Friedman aptly put it in a chapter of the book It’s a Man’s World. (That chapter, plus other great material Josh has compiled about men’s pulp mags, is now posted on his Black Cracker blog.)

In the late ‘60s and early ‘70s, the publishers and editors of men’s adventure magazines tried a number of things to stave off their demise.

Many moved from using the rather tame cheesecake photos they had featured for years to Playboy-style nude photos.

Increasingly, the editors also sexed-up and tabloidized stories with steamy headlines, subheads, photos and captions that often went far beyond what was actually in the stories themselves.

One of the funniest examples of this is the photo spread created for the “INNER SECRETS OF THE INTERNATIONAL COCAINE COMBINE,” a story in the July 1971 issue of Bluebook magazine that was written by Robert F. Dorr. (You can download and read the entire story by clicking on this link.)

Bob Dorr wrote hundreds of stories and articles for men’s adventure magazines in the 1960s and early 1970s. The majority were war and adventure stories. I’ve featured some of them in previous posts on this blog. 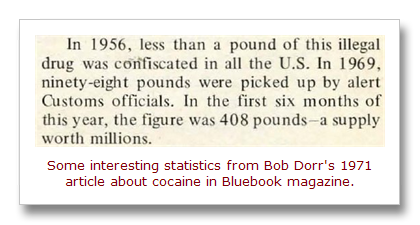 Bob went on to become a top military and aviation historian. He has has written dozens of critically-acclaimed history books, the latest of which is his aerial Band of Brothers saga Hell Hawks!.

His 1971 Bluebook article about cocaine is a pretty straightforward account of what was emerging at the time as a new front in America’s “War on Drugs.”

It provides an interesting glimpse of the early coke smuggling business, years before it mushroomed into a huge, multi-billion dollar industry in the late 1970s and 1980s, when “Cocaine Cowboys” and Columbian cartels brought in coke by the tons.

But what Bob Dorr reported about coke in his article wasn’t sexy enough for the editors of Bluebook. So, they “enhanced” it.

Most notably, they added a big two-page photo spread, dominated by a shot of what looks like a Swingers’ party, with an intertwined pile of semi-nude men and women going at it. 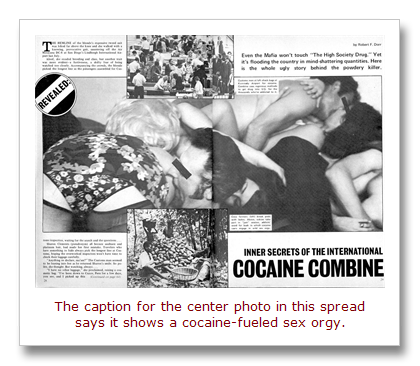 Some of them have small black rectangular bands overlaid on their eyes. These eye-masking graphic elements were common in racy vintage magazine photos.

Ostensibly, they were used because the photos were “real” and people in them didn’t want their identities known. Of course, in truth, most were staged shots.

Bluebook’s caption writer added a “Reefer Madness” style comment about this photo in the caption, which helpfully explains:

But the Bluebook guys in charge of photos and photo captions didn’t care about that.

They were focused on having photos and captions that would increase Bluebook’s quotient of sex-related pics and references.

Equally funny is the small photo to the left of the headline that shows some young black men and a pile of large plant pods. The caption explains: “Coca farmers break pods with bolos.” 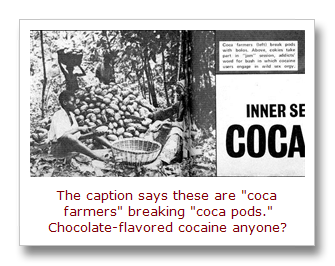 Yes, that’s right. The pods in that photo are actually pods from cocoa trees, which are used to make chocolate — not cocaine.

Cocaine, of course, is made from the leaves of the coca plant

Bob Dorr knew this and says it in the article. However, it’s not clear from what he wrote that even he was fully cognizant of the rather complicated coke-making process.

Of course, we’re talking about 1971 — long before most people became at least vaguely familiar with that process by seeing it in TV shows like Miami Vice and countless cop movies made during and since the 1980s.

Back in 1971, few people would have known that the coca pod photo and caption were hilariously off base.

Although Dorr’s cocaine article had to be amped up to fit Bluebook’s need for sexy Seventies-style content, the same issue included a number of stories were directly sex-related.

Another “sexposé” story took us South of the Border to go “INSIDE THE MEXICAN PASSION HOUSES WHERE U.S. CHICKS TAKE ADVANCE COURSES IN SEX.” 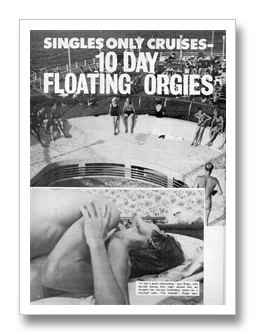 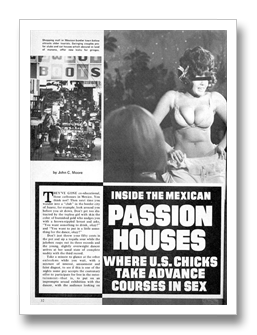 But stories like those and more nude photo spreads weren’t enough to save men’s adventure magazines from extinction. By 1975, Bluebook and most other men’s pulp mags were out of business.

By the way, the cover painting for this issue of Bluebook, with the great portrait of the cigar-chomping GI, is not credited in the magazine. But Rich Oberg, the top expert on men’s adventure magazine art, took a look and told me it was done by Mel Crair. (Thanks, Rich.)