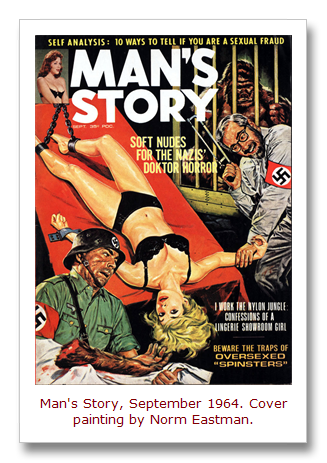 Men’s adventure art collector Rich Oberg recently told me about a trip he made in 2004 to visit artist Norm Eastman at his home in Lompoc, California, a few years before Eastman died.

Rich noted that Eastman “was as nice a guy and as perfect a gentleman as you’d ever meet — kind, polite, a little shy.”

Rich’s observation highlights one of the many ironies about Norm Eastman.

He was a nice guy, born into a God-fearing Canadian family in 1931, who got his Fine Arts degree at Mount Allison University, a Christian college with an art school. But his wild, politically-incorrect Nazi bondage and torture cover paintings are among the most famous (and infamous) ever done for men’s adventure magazines of the 1950s, 1960s and early 1970s.

They are also among the most highly sought after by collectors.

Indeed, Eastman’s sadistic Nazi covers are what many people think is representative of the entire men’s pulp magazine genre. They also played a role in the creation of the somewhat derogatory term “men’s sweat mags” as a nickname for men’s adventure magazines.

The truth is (as you know if you read this blog), evil Nazi covers are just one of the many subgenres of men’s adventure magazine cover art.

Here’s another Norm Eastman irony: two Jewish guys were the masterminds behind the magazines that featured most of Eastman’s Nazi bondage and torture paintings.

I found this ironic fact in the original, now out-of-print edition of the Men’s Adventure Magazines book that features Rich Oberg’s art and magazine collection. The comics and pulp art expert George Hagenauer contributed a great interview with Eastman in that first edition, which is sadly omitted from the newer 2008 edition (as are many examples of Eastman’s art that were in the original edition of the book).

In the interview, Eastman explained that, in the 1950s, he started out in the men’s adventure realm by providing artwork to magazines that were part of Martin Goodman’s Magazine Management empire, like For Men Only, Men and Male.

Then, around 1960, Eastman began a long term relationship with the owners of the Reese and Emtee publishing companies, B. R. “Bud” Ampolsk and Maurice Rosenfield (spelled Rosenfeld by Hagenauer and some other sources). They were the publishers of some of the most outré men’s adventure magazines, such as Man’s Book, Man’s Epic, Man’s Story, Men Today, New Man and World of Men. 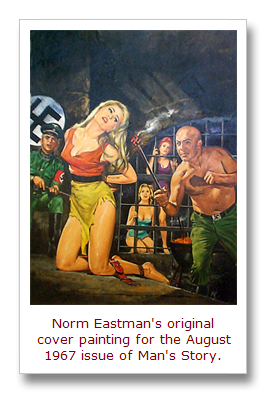 “They both lived in a Jewish neighborhood in midtown Manhattan…Ampolsk was a very relaxed guy. Rosenfeld was also a nice guy. They gave me the feeling that you weren’t really doing these dirty little books.

Ampolsk once told me in all seriousness that we had never done anything that the Nazis hadn’t actually done. They were all detailed in files in Washington somewhere. I don’t know if he was fibbing to make me continue doing the covers or what, but it did make me feel a little better about doing them.

I never saw the story before I illustrated it. Ampolsk was the idea man on the covers, so he looked after getting the stories written after we had settled on a cover image.”

Like many illustration artists, Eastman used posed photographs of male and female models to create his cover paintings.

Which brings up another little irony Rich Oberg told me about Norm Eastman: he often used his own face as the model for the evil torturers in his cover paintings.

For example, see the deranged Nazi with the beard, glasses and hacksaw in the cover painting on the September 1964 issue of Man’s Story at the top of this post? That’s Norm Eastman.

And, there’s bearded Norm again in the cover below, playing an evil Satanist on the May 1974 issue of Men Today.

By the time Rich Oberg visited Norm in 2004, his hair and beard were white, as shown in the photo of Norm, his wife Jane and Rich. (This photo and the two covers featuring Norm’s own bearded visage are from Rich Oberg’s collection and are posted here with his permission. Thanks, Rich!). 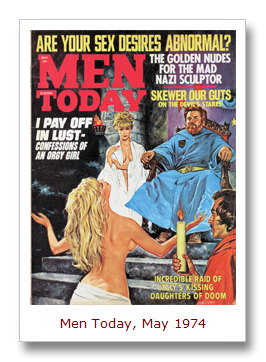 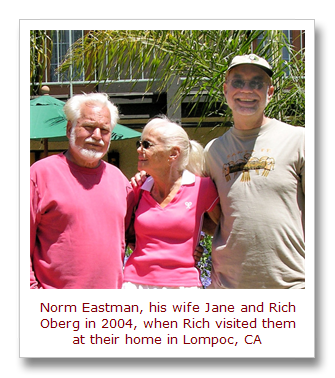 Rich told me that he hadn’t noticed that Norm often used self portraits in his cover paintings until Norm mentioned it to him during that 2004 visit.

“Sure enough,” Rich said, “when I got home and went through my magazines and the original paintings I bought from Norm, there he was again and again, usually playing the bad guy.”

For example, below is the cover for Bethany Campbell’s romance novel The Lost Moon Flower, published by Harlequin Books in 1989. Next to it is the original Norm Eastman painting used for that cover (with a small inset image of the book, as shown in a Heritage Auction Galleries catalog for an auction that included this painting). 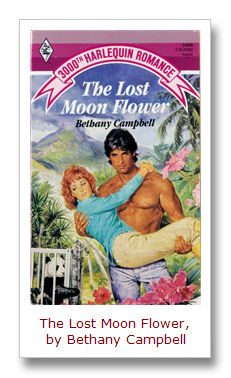 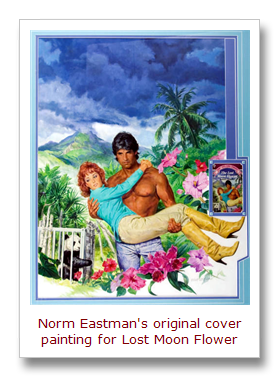 By the way, although men’s adventure magazines are often tagged as sexist, the covers of the romance novels written for women also feature lots of hunky he-men and damsels in distress. So, are they sexist, too?

I don’t know. But I do know I think Norm Eastman’s cover paintings are terrific — from his sadistic Nazi phase to his Harlequin Romance phase.