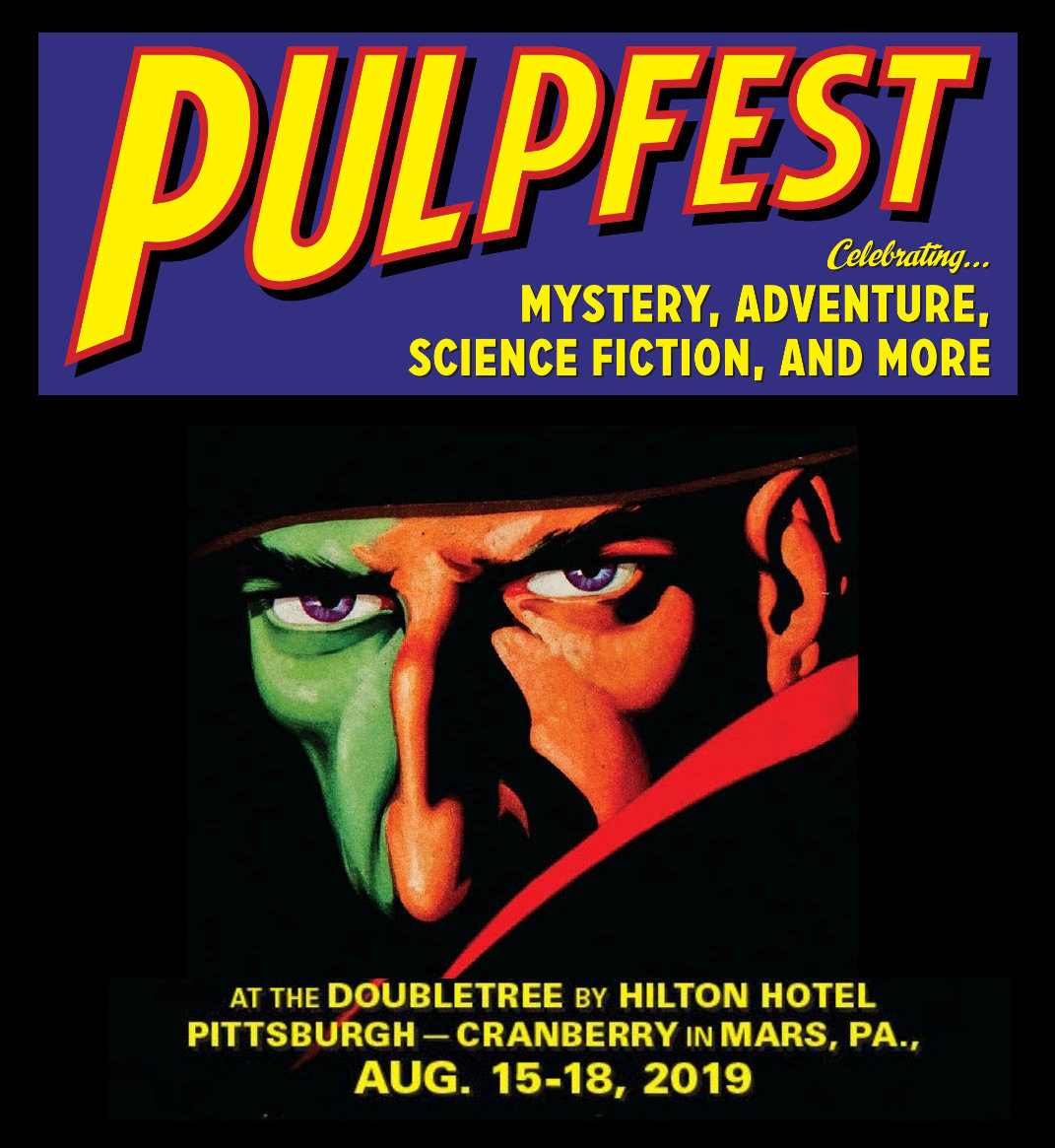 The 2019 PulpFest convention will be held in Pittsburgh from August 15th to 18th.

PulpFest is a descendant of the pioneering PulpCon that used to be held in my home state of Ohio.

It’s one of the biggest and best annual pulp-related conventions in the country.

Last year, Mike Chomko, one of the tireless PulpFest organizers, invited Wyatt Doyle and I to make a presentation there.

We also had a table where we sold and signed books from our growing Men’s Adventure Library series.

My previous posts on this blog provided an overview of our 2018 PulpFest presentation.

We’ll be at PulpFest again this year, selling books — including several new releases.

We’ll also be making another presentation.

This one is about how the pioneering pulp magazines ARGOSY, ADVENTURE and BLUE BOOK evolved into men’s adventure magazines (MAMs) after World War II. 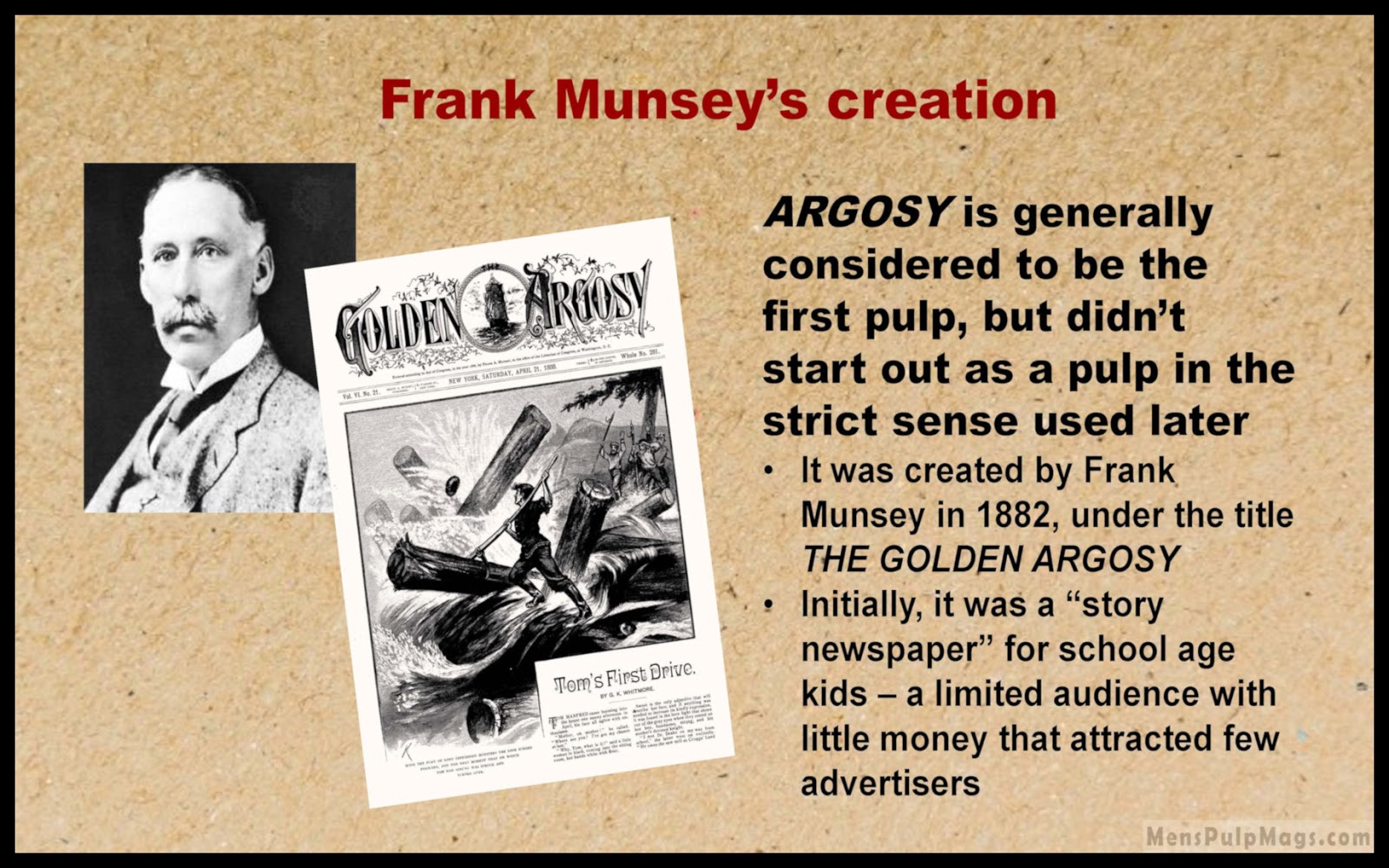 Some fans of classic pulp magazines have an issue with the term “pulp” being applied to anything except the pulp mags published during the first half of the 20th Century.

But if we put debates over terminology aside, it’s clear that “pulp DNA” is evident in other magazine genres that followed. You know it when you see it.

One of the clearest examples is the men’s adventure magazine genre that emerged in in the late 1940s, flourished in the ‘50s and ‘60s, then faded away in the 1970s.

Those magazines are ARGOSY, ADVENTURE and BLUE BOOK.

ARGOSY is generally considered to be the first pulp magazine.

But it didn’t start as a true pulp in the strictest sense of the term applied later.

When it was first created by Frank Munsey in 1882, under the title THE GOLDEN ARGOSY, it was essentially a dime novel style “story newspaper” for school age kids.

After several years of less than stellar sales, Munsey realized that juvenile readers soon outgrew what they read as children.

Moreover, since kids of that era had comparatively little money to spend, a publication targeted to them didn’t attract a lot of advertisers.

In December 1888, Munsey renamed his tabloid THE ARGOSY and began featuring fiction stories targeted to adults. 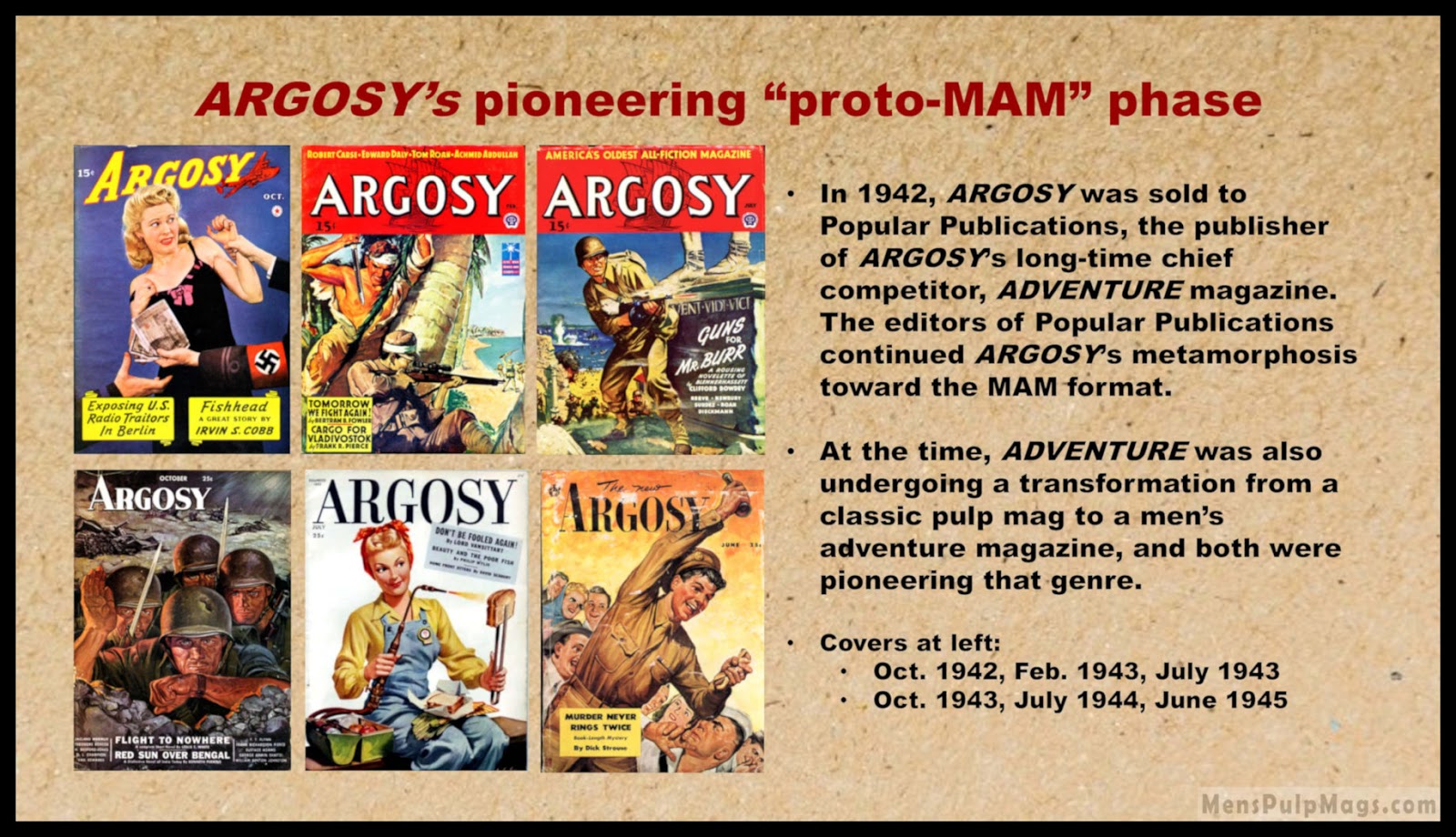 In October 1896, Munsey began publishing THE ARGOSY in a magazine format with all fiction stories.

The December 1896 issue was the first printed on the rough wood pulp paper that gave the “pulps” their name.

The painted cover element was added in October 1905, making THE ARGOSY the template for the classic pulp magazine.

ARGOSY continued in that basic format, with a couple of changes in size and name, until the late 1930s.

In the years leading up to World War II, ARGOSY began to include some news-style articles and other true stories along with fictional fare.

Some of those stories are about Adolf Hitler and the Nazis, their persecution of the Jews, and the threat they posed to the world.

When World War II broke out, ARGOSY began a slow but steady metamorphosis toward the men’s adventure magazines format.

Basically, it was a “proto-MAM phase.” 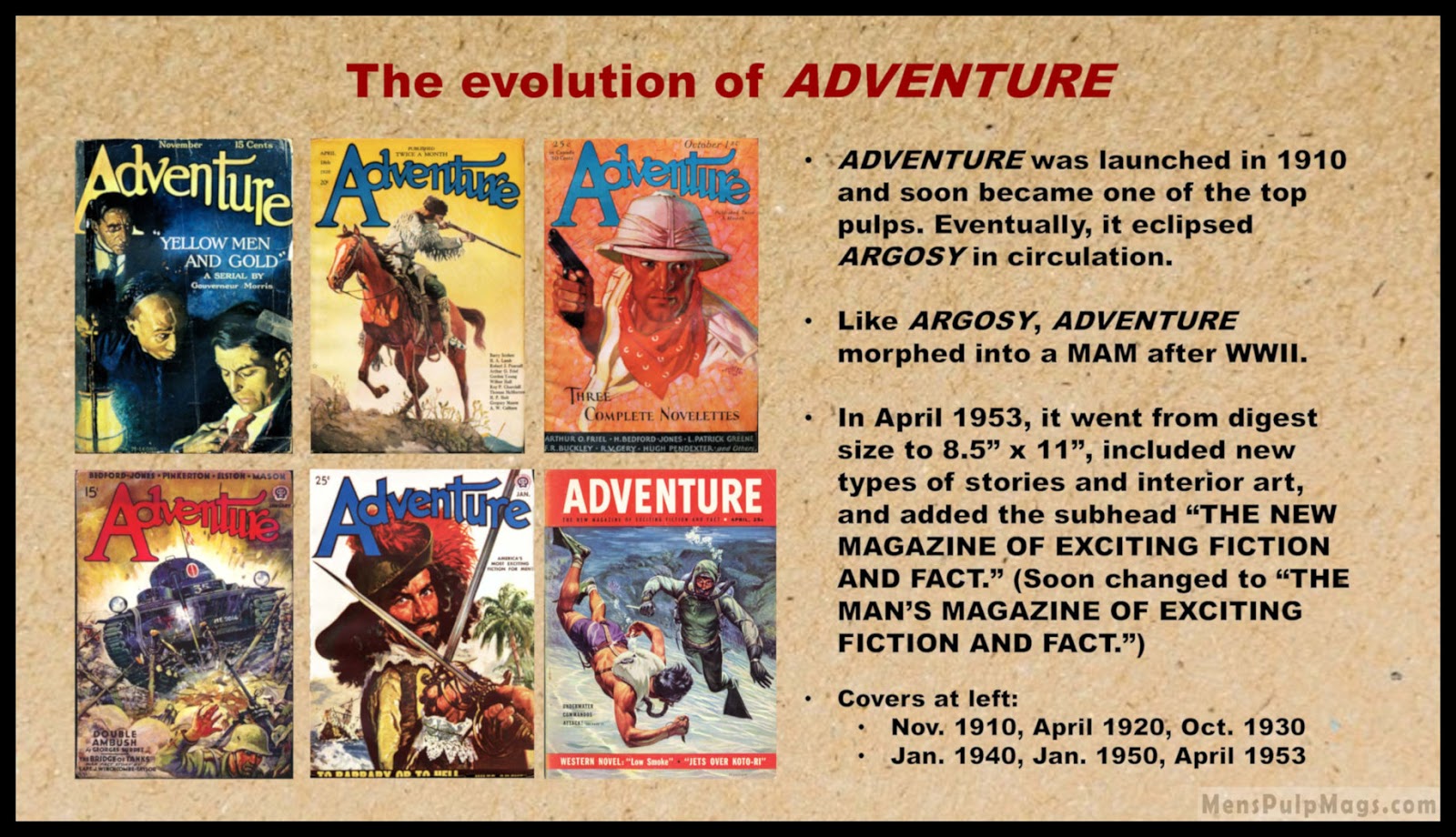 Fiction stories by top pulp writers were still a major element of the magazine.

But true and fictional war stories about the fight against the Nazis and Japanese became more common, as did other types of true or fact-based stories.

For example, the August 1942 issue (which has an evil Jap cover) includes articles about Gen. Douglas MacArthur and American war heroes, a fiction story by Leslie Charteris about his popular character “The Saint,” and an installment of the serialized publication of Gypsy Rose Lee’s “G-String Murders.”

In 1942, ARGOSY was sold to Popular Publications, the publisher of ARGOSY’s long-time chief competitor, ADVENTURE magazine.

The editors of Popular Publications continued ARGOSY’s metamorphosis toward the MAM format.

At the time, ADVENTURE was also undergoing a transformation from a classic pulp mag to a men’s adventure magazine and both were pioneering the MAM genre.

ADVENTURE was launched in 1910 and soon became one of the top pulps.

Eventually, ADVENTURE eclipsed ARGOSY in popularity and by the mid-1930s was the best-selling pulp.

Like ARGOSY, ADVENTURE morphed into a men’s adventure magazine after World War II. 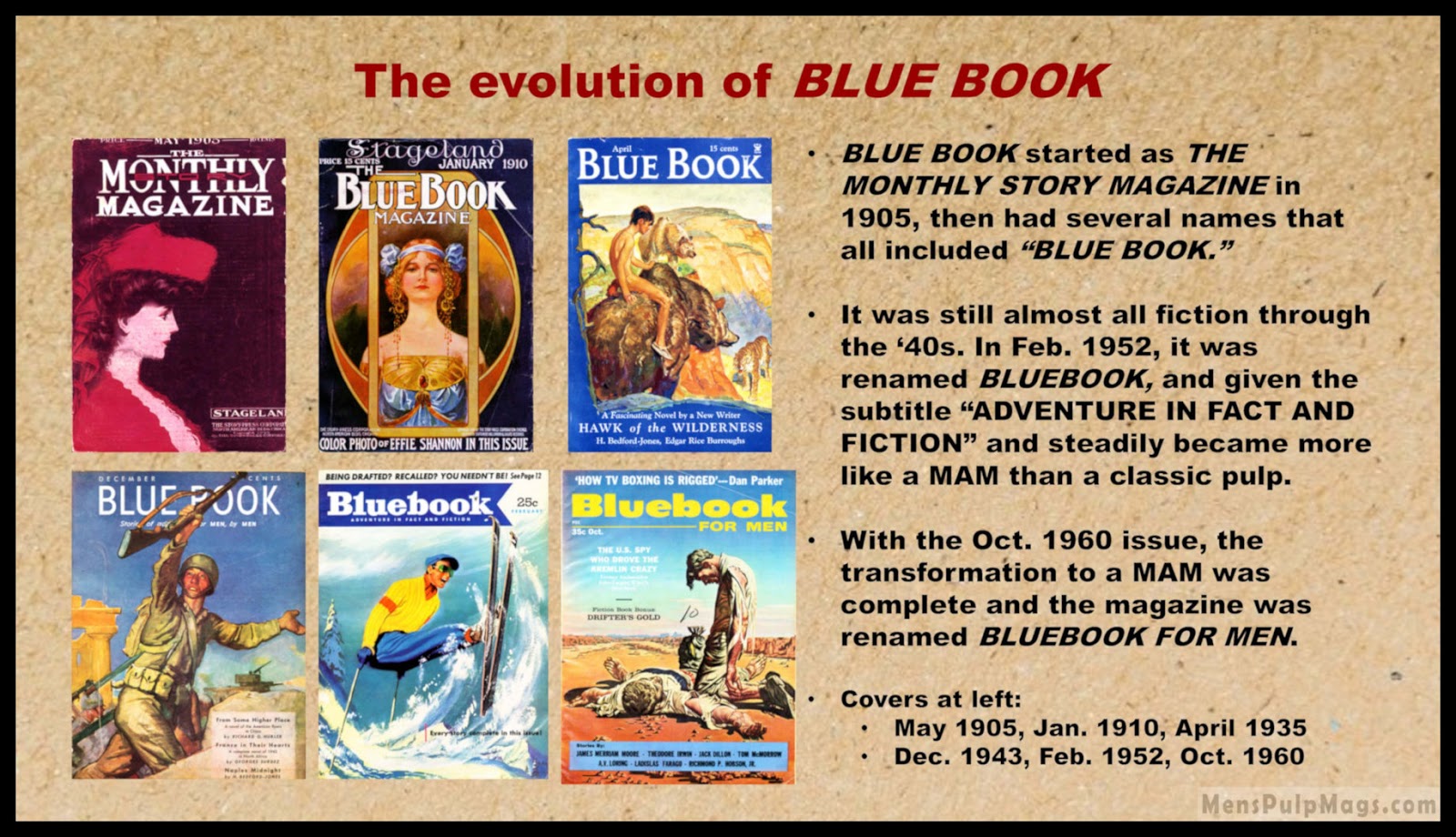 On the cover, the subhead “THE NEW MAGAZINE OF EXCITING FICTION AND FACT” was added under the title.

In October 1953, that was changed to “THE MAN’S MAGAZINE OF EXCITING FICTION AND FACT.”

Another top pulp magazine that morphed into a men’s adventure magazine was BLUE BOOK.

It started out as THE MONTHLY STORY MAGAZINE in 1905.

It was renamed THE MONTHLY STORY BLUE BOOK MAGAZINE in 1906.

From then until 1952, it had various titles with the words BLUE BOOK as the constant factor.

During World War II, BLUE BOOK changed from digest size to standard 8 ½” by 11” magazine size and started including fact-based articles along with its pulp fiction yarns.

In 1951, it began being touted on the cover as BLUE BOOK, the “Magazine of Adventure in Fact and Fiction.”

In February 1952, it was renamed BLUEBOOK, one word instead of two, with the subtitle “Adventure in Fact and Fiction,” and became more of a men’s adventure magazine than a pulp.

By October 1960, that transformation was completed by a new owner, and the magazine was renamed BLUEBOOK FOR MEN.

In their transformation to full blown MAMs, ARGOSY, ADVENTURE and BLUEBOOK kept key parts of their pulp DNA: most notably their painted covers and pulpy action and adventure stories. 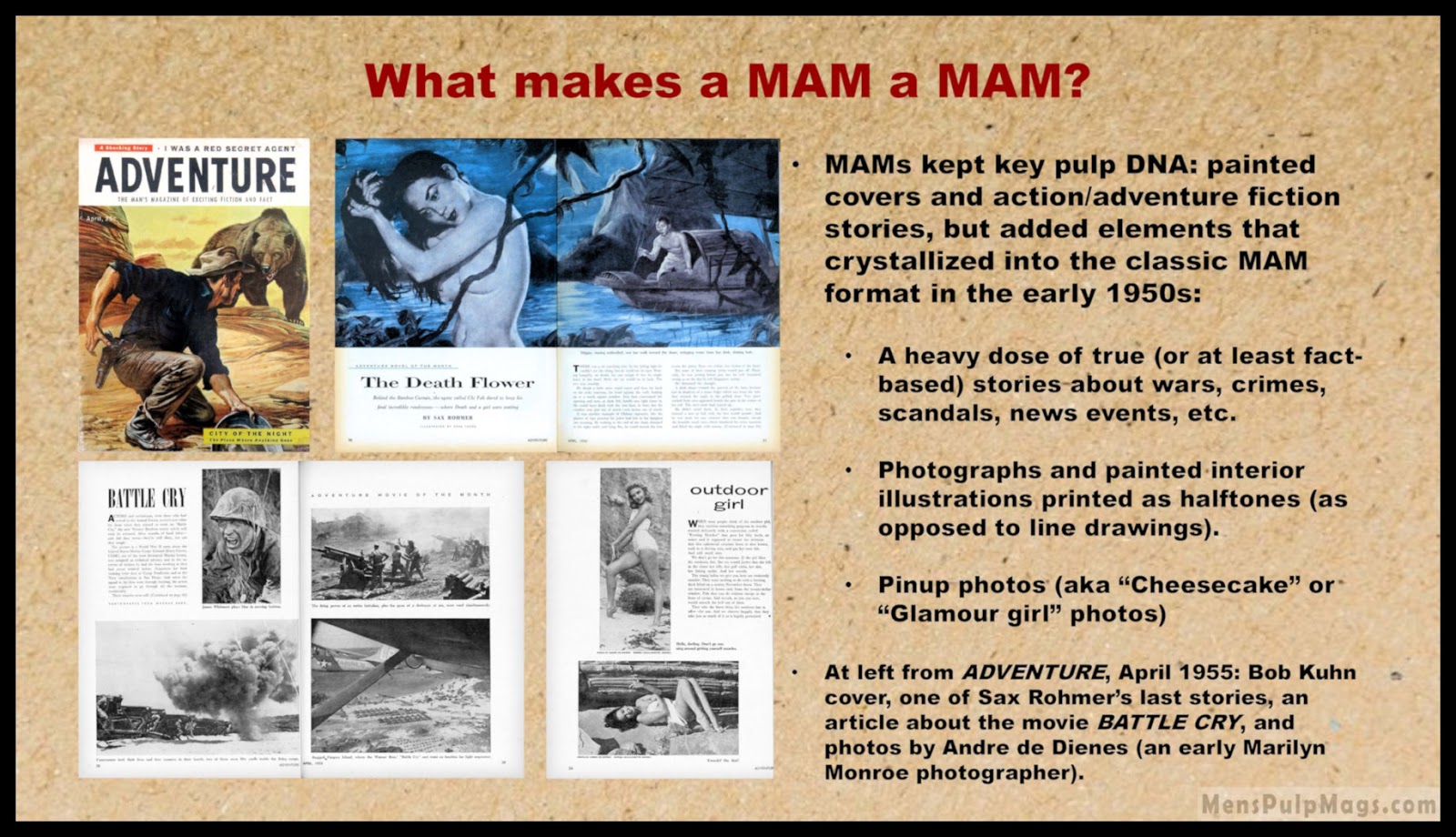 But they added several other elements that crystallized into the classic men’s adventure magazine format in the early 1950s.

One was heavy dose of true (or at least fact-based) stories about wars, crimes, scandals, news events and other topics of interest to men.

Another was painted interior illustrations and photographs rendered as halftones, as opposed to the line drawing artwork in classic pulps.

They also added a third key part of the MAM recipe: photos of attractive models and actresses wearing swimsuits, lingerie or less.

These “pinup photos” — aka “cheesecake photos” or “glamour girl” photos — were already common in other magazines targeting men during World War II, including the U.S. Army’s own weekly magazine YANK, men’s mags like ESQUIRE.

Indeed, as the MAM genre was taking shape in the ‘50s, pinup pics were common in almost all men’s magazines, as well as in various other types of periodicals.

From a sales standpoint, the metamorphosis of ARGOSY, ADVENTURE and BLUEBOOK and the rise of the MAM genre in the Fifties made a lot of sense. 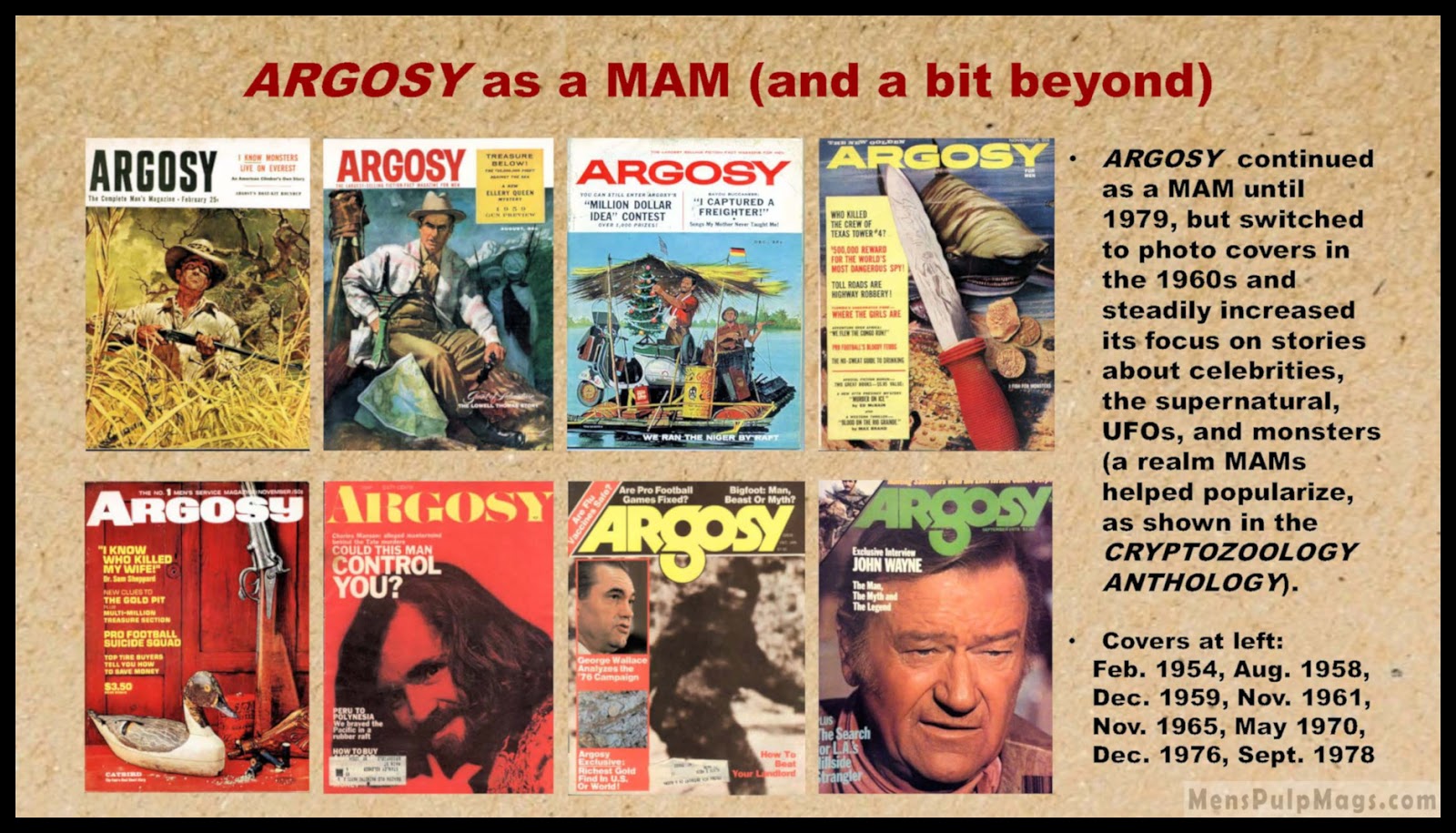 During the 1950s, the classic pulp mags began to fade away and the men’s adventure magazine genre took off.

During the ‘50s and ‘60s, more than 160 men’s adventure magazines were launched.

Others – including the MAM versions of ARGOSY, ADVENTURE and BLUEBOOK – lasted for decades.

ARGOSY continued in the basic men’s adventure magazine until 1979, but switched to photo covers in the 1960s and steadily increased its focus on stories about UFOs, the supernatural, celebrities and monsters.

In fact, through the ‘50s and ‘60s, MAMs played a significant role in popularizing monster lore, which lead to our book collecting such stories, the CRYPTOZOOLOGY ANTHOLOGY.

ADVENTURE continued until 1971. However, in 1967, it switched to mostly photo covers and in the final years had as many pinup and ultimately nude photo spreads than action/adventure stories inside.

Oddly, the last few issues were a failed attempt to return to a more classic pulp-and MAM-like format.

BLUEBOOK FOR MEN ran until May 1975. It kept the basic MAM format.

But in the final years, it included more (and racier) pinup photos inside and more sexposés.

It also began recycling content — even reprinting some entire issues. 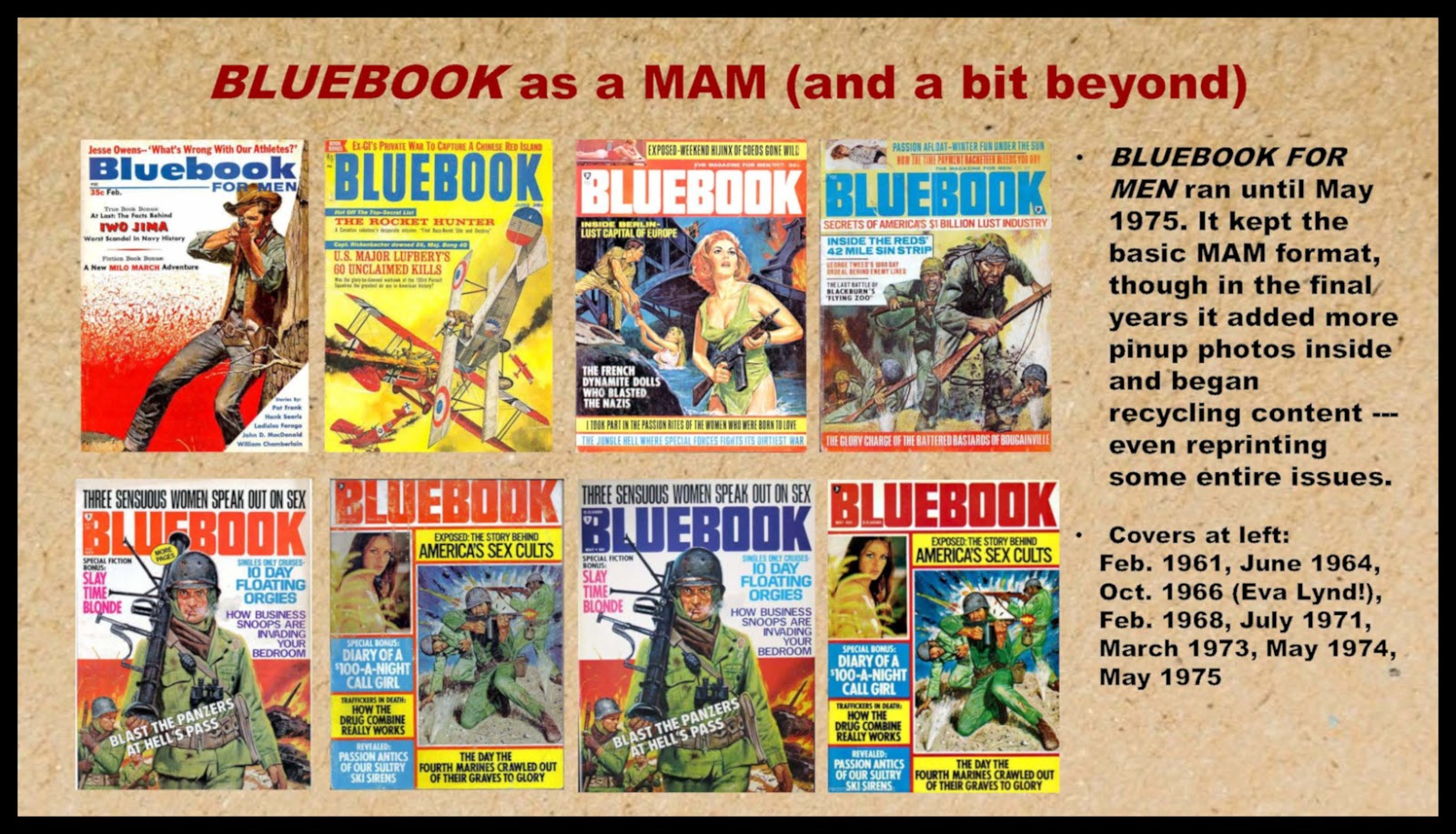 When I started collecting men’s adventure magazines in earnest about 10 years ago, I noticed that there were many books featuring classic pulp magazine stories and artwork.

But there were no recently-published anthologies of MAM stories and few books that featured MAM artwork by top MAM illustrators.

That’s the niche Wyatt Doyle and I are working to fill with our Men’s Adventure Library series.

We started with the WEASELS RIPPED MY FLESH! story anthology, which features stories by and interviews with some of the notable writers who once wrote for men’s adventure magazines, such as Lawrence Block, Jane Dolinger, Harlan Ellison, Bruce Jay Friedman, Walter Kaylin, Ken Krippene, Mario Puzo Robert Silverberg and Walter Wager.

We now have a dozen books in the series and more coming this year.

One of our forthcoming books, debuting at PulpFest, is about Eva Lynd.

If you’re a fan of vintage men’s mags or a regular reader of this blog, you know that Eva was both a popular pinup photo model and a men’s adventure magazine artist’s model, as well as an actress.

Wyatt and I view her as a MAM supermodel, like the male model Steve Holland, who Eva often modeled with in reference photo sessions for artists like Norm Eastman and Al Rossi.

That’s reflected in the title we gave to the book: EVA LYND: MEN’S ADVENTURE SUPERMODEL.

If you make it to PulpFest this year, please stop by our table to say “hi” and check it out. 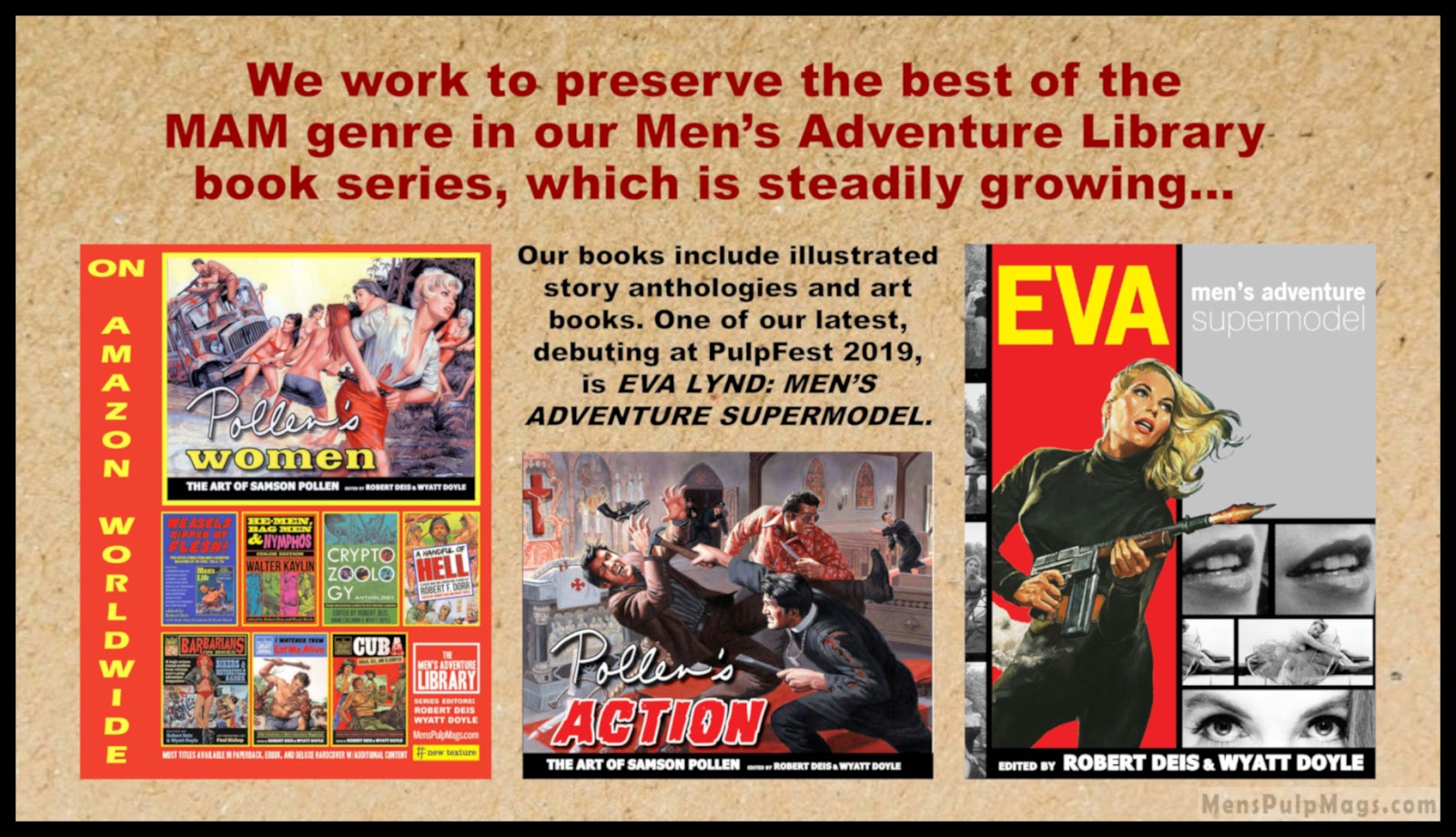