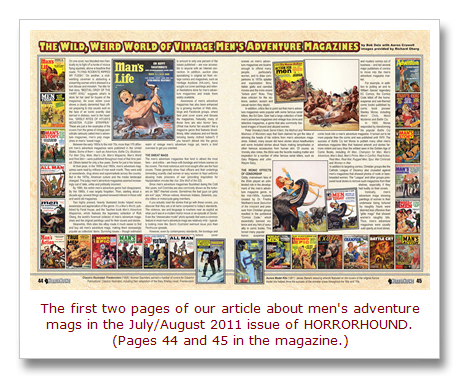 Like many fans of vintage men’s adventure magazines, I’m also a fan of horror and science fiction.

The three genres have a lot in common. And, the connections they share go beyond the fact that they are all known for their fantastic imagery and imaginative stories that often feature killer creatures, evil fiends, scantily-clad damsels and envelope-pushing action and violence.

Many notable artists, publishers and writers who were involved in men’s pulp magazines were also involved in horror or sci-fi magazines, books, comics and movies.

Some of these connections are mentioned in an article I put together with men’s pulp art collector Rich Oberg for the July/August 2011 issue of the horror/sci-fi fan mag HORRORHOUND (issue #30).

I wrote the text with contributions from HORRORHOUND’s Managing Editor Aaron Crowell (who was great to deal with and very knowledgeable). 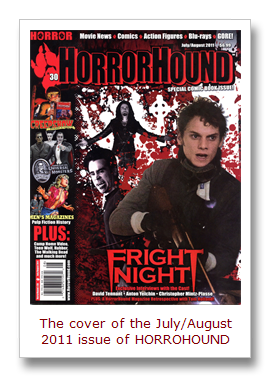 Rich Oberg provided dozens of cover scans and photos of some of the original artwork he owns to illustrate the article. The layout the HORRORHOUND crew created with them is very cool.

However, due to space constraints, there simply wasn’t room for captions noting the dates of the issues shown or the names of artists who did the cover paintings for all of the images.

So, I’m going to fill in those blanks here on this blog, in a series of posts that identify the issues featured on each page of the article and the artists who painted each cover (when known). At the same time, I’ll provide a closer look at the covers and artwork by posting high resolution copies.

Today’s post starts with the first page of the HORRORHOUND article, which is on page 44 in the magazine.

The cover in the upper middle of that page is one of the most famous of all men’s adventure magazine covers. It’s the September 1956 issue of MAN’S LIFE, which I featured in a previous post here.

Wil Hulsey’s gonzo man vs. killer critters painting for that cover was inspired by the equally gonzo story inside “WEASELS RIPPED MY FLESH” — a title later immortalized by musician Frank Zappa, when he used it for a 1970 album by his group The Mothers of Invention.

Wilbur “Wil” Hulsey (sometimes mistakenly credited as “Will”), is one of my favorite men’s adventure artists. His cover for the September 1956 cover of MAN’S LIFE has special significance for me, since it was instrumental in getting me hooked on collecting and writing about men’s adventure magazines. (BTW, I offer a high-resolution PDF copy of that entire issue as a download in my Payloadz store.)

Rich Oberg and I have both tried to track down the original Hulsey “WEASELS RIPPED MY FLESH” painting, so far with no luck. And, I’ve never seen a photo of it anywhere. So, I decided to to create my own facsimile.

The image below, with the cover’s text removed using Photoshop, shows what Hulsey’s original painting would have looked like. (Close to it, anyway.) 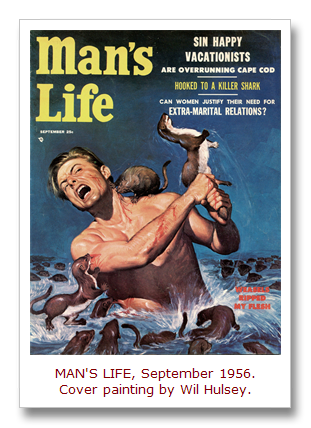 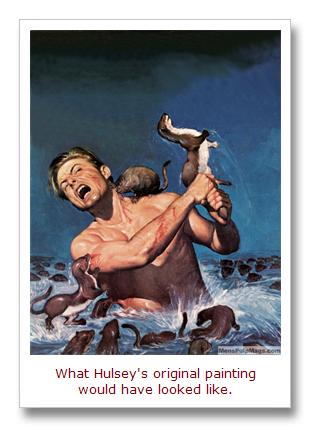 A different MAN’S LIFE cover is shown at the top left of the first page of the HORRORHOUND article. That issue, published in November 1957, features another killer creature painting by Wil Hulsey, for the story “SPIDER MONKEYS TORE ME APART.” (Yep, even cute little spiders monkeys could be vicious killers in men’s pulp magazines.)

Below the bloodthirsty monkeys on that page is the cover of the January 1975 issue of MEN TODAY, showcasing the rarely-seen Nazi torture-by-bulldozer technique. (Artist unknown.) 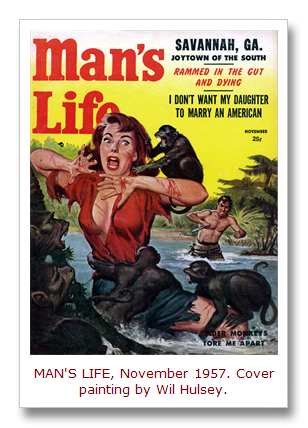 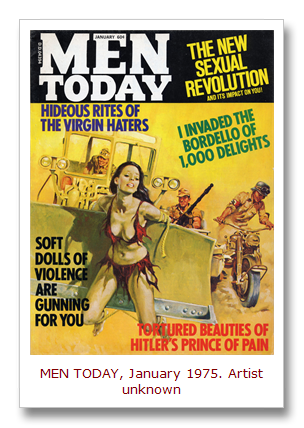 In the painting on the next cover, MAN’S STORY, May 1966, the bad guys are Viet Cong. This one was done by John Duillo for the story “FIND THE KIDNAPED BEAUTIES OF THE VIET CONG TORTURE LAIR.”

Next up is the November 1955 issue of TRUE WEIRD, an unusual men’s adventure magazine that primarily focused on stories about monsters, ghosts and the supernatural. The cover painting is by Clarence Doore.

It shows Doore’s vision of the story “FISH WITH HUMAN HANDS ATTACKED ME!” (I think those man-fish were relatives of the Creature from the Black Lagoon.) 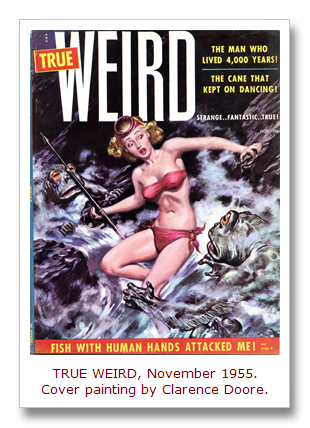 As noted in the HORRORHOUND article, Prezio also did cover paintings for the classic Warren horror magazines CREEPY, EERIE and FAMOUS MONSTERS OF FILMLAND.

The cover at the bottom left corner of the first page of the HORRORHOUND article features a bat-filled painting that could definitely have been used on a poster for an old horror flick. It’s the June 1957 issue of MAN’S ACTION magazine. The artist was John Fay. 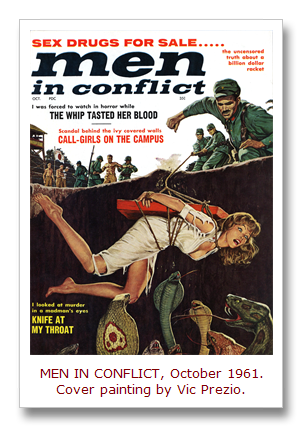 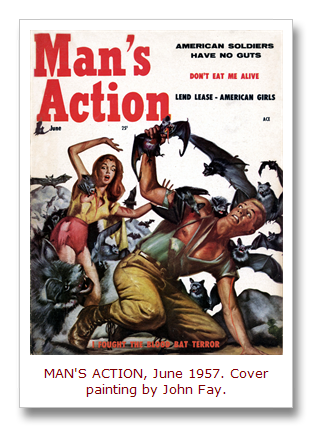 There are some more bloodthirsty flying mammals in the second cover on the bottom row, the August 1957 issue of TRUE MEN STORIES. This time they’re killer flying squirrels. (You didn’t know how bloodthirsty they were, didja?) The painting is another man vs. critter masterpiece by Wil Hulsey.

To the right of that Hulsey cover is another one by John Duillo. It’s an iconic Nazi bondage and torture scene on the cover of the February 1965 issue of MAN’S EPIC. 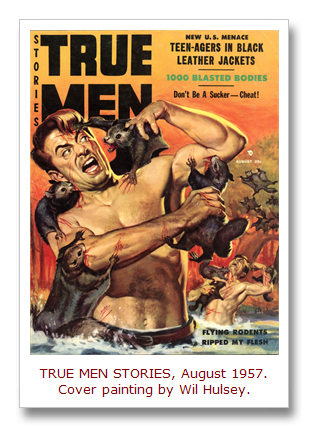 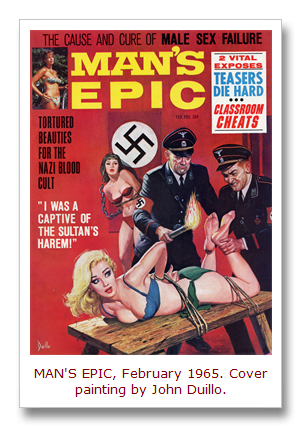 The cover in the middle at the bottom of page 44 is by Basil Gogos, the artist featured in my previous post (and some older ones).

As many horror fans know, Gogos created some the best cover paintings for Warren’s FAMOUS MONSTERS OF FILMLAND, CREEPY and EERIE. If you’re a regular reader of this blog, you know that Gogos also did many cover paintings and interior illustrations for men’s adventure magazines in the 1960s and early 1970s.

The cover shown below from the HORRORHOUND article is the April 1960 issue of MAN’S ACTION. The exotic adventure cover painting by Gogos goes with the story inside “MY MELANESIAN BRIDE OF TERROR.”

Next is the cover of SIR! magazine’s annual “yearbook” for 1963. The artist who did the cover for this one isn’t identified. My guess is that it’s by Mark Schneider, a regular cover artist for SIR! and other magazines published by pioneering men’s adventure magazine publisher Adrian B. Lopez, such as SOUTH SEA STORIES, ACTION, ESCAPE TO ADVENTURE and MAN TO MAN. 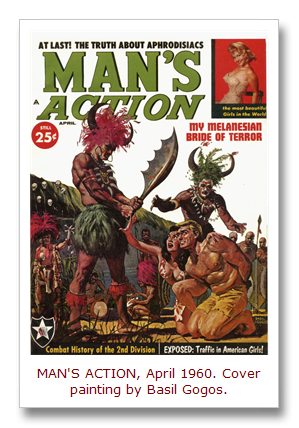 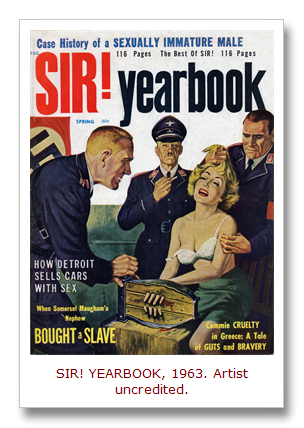 The last men’s pulp mag cover shown at the bottom of page 44 of HORRORHOUND is ALL MAN, July 1961. It features an evil Nazi cover by Vic Prezio.

Next to that is a vintage comic cover from 1958: the CLASSICS ILLUSTRATED version of Mary Shelley’s novel Frankenstein. The cover painting was done by the legendary illustrator Norman Saunders, another artist whose work spanned the genres of horror, science fiction and men’s adventure magazines. 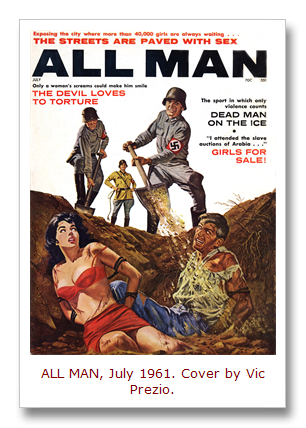 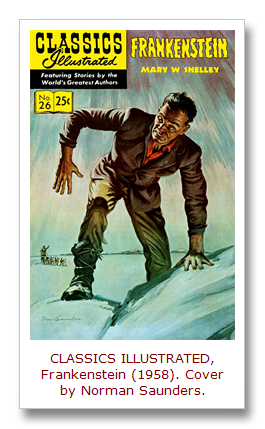 Saunders started as an early pulp magazine cover artist. He’s better known to many horror and science fiction fans for his paintings on the ultracool Mars Attacks trading cards published by TOPPS in the 1960s. As you know if you read this blog, Saunders also did many great covers and interior illustrations for men’s adventure magazines, from the early 1950s to the mid-1970s.

In upcoming posts, I’ll provide the issue and artist info about the covers shown on other pages of the HORRORHOUND article that Rich Oberg and I put together for the July/August 2011 issue.

In meantime, if you like this blog, check out our new MensPulpMags store on CafePress, which offers posters, t-shirts, and other items featuring covers from old men’s adventure magazines.