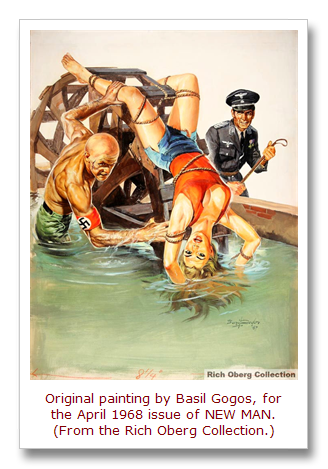 Recently, men’s pulp art collector Rich Oberg and I were asked to put together an article about men’s adventure magazines for HorrorHound, a nicely-produced periodical about films, TV shows, books, comics and magazines in the horror and fantasy genres.

As noted in that article (published in the July/August 2011 issue of HorrorHound) and in some previous posts on this blog, a number of notable artists who are famous among horror fans also did covers and interior illustrations for the post-WWII men’s pulp adventure mags.

One of the greatest artists who worked in both arenas is Basil Gogos.

Gogos is most widely known for the movie monster cover paintings he created in the 1960s and 1970s for FAMOUS MONSTERS OF FILMLAND and other horror/fantasy magazines put out by Warren Publishing.

What’s less well known is that Gogos also did many cover paintings and interior illustrations for men’s adventure magazines in the Sixties and Seventies.

These ranged from panoramic battle scenes and “Good Girl Art” to the gonzo bondage and torture scenes associated with the “sweat magazine” subgenre of men’s pulp mags.

While Rich Oberg and I were discussing what images to use in our HorrorHound article, he emailed me photos of a number of the original Basil Gogos paintings he owns.

Some of my favorites are featured in today’s post.

The Gogos painting at the top, showing an evil Nazi variation on waterboarding, was used on the cover of the April 1968 issue of NEW MAN magazine. 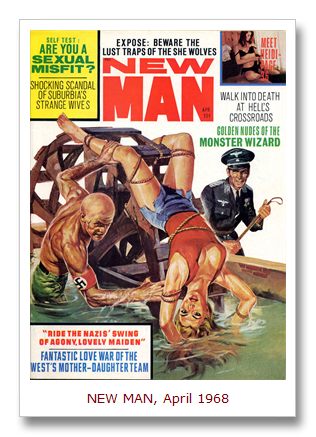 NEW MAN was a classic sweat mag that featured politically incorrect covers by a number of notable illustration artists, including Gogos, Norm Eastman and Norman Saunders.

According to DEVINE’S GUIDE TO MEN’S ADVENTURE MAGAZINES, NEW MAN was published from April 1963 to December 1971, initially by the Reese Publishing Company, then by Emtee Publications, Inc.

As you may know if you’re a regular reader of this blog, Holland was a favorite model of many men’s adventure illustrators. But he’s probably best known as the model used by artist James Bama as Doc Savage for the Bantam paperback series.

In the excellent book about Basil Gogos by Kerry Gammill and J. David Spurlock, Gogos explained that he used Holland for most of the male figures in his men’s adventure mag artwork. In fact, to keep his costs down, Gogos would often shoot photos of Holland doing the poses for all of the men in a cover scene and then change the faces as he created the painting.

“Steve was a model that everyone used at the time,” Gogos recalled, “to the point where an art director said to me, ‘Can you choose somebody else? All your heroes look like him!’ So I had to use other models, too…and I had to change his face. But it’s experience that you pick up.”

You can recognize Holland as the injured Yank pilot in the cover painting shown below, which Gogos did for the December 1971 issue of MAN’S EPIC, another Ampolsk/Rosenfield magazine published from September 1963 to December 1972.

In many men’s pulp mag cover paintings, some brave American guy is protecting scantily-clad damsels from evil Nazis. In this one, the damsels are bravely fighting off the Nazis to protect the man. Of course, they’re scantily-clad anyway. (Hey, it’s a men’s pulp mag!) 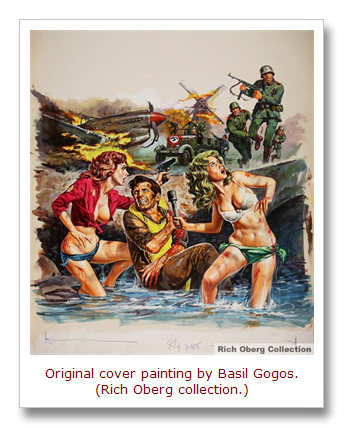 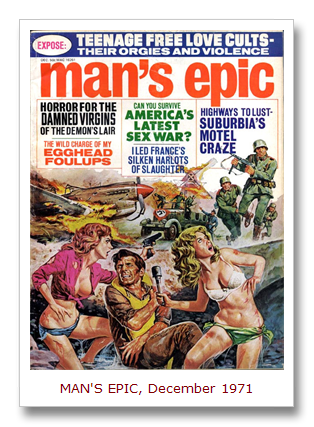 Below are four more original paintings by Basil Gogos from the Oberg Collection, next to the magazine covers they were used on, including NEW MAN, July 1966… 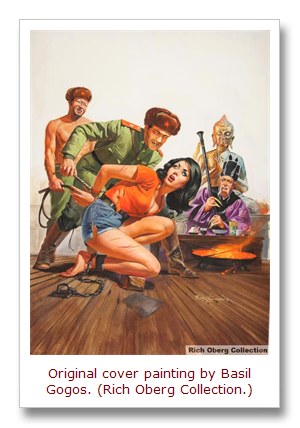 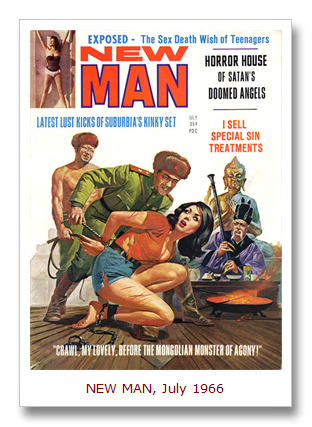 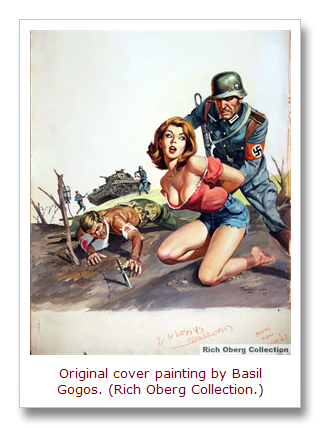 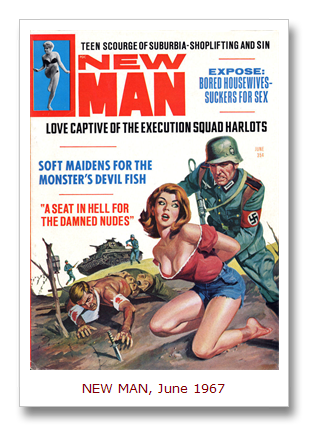 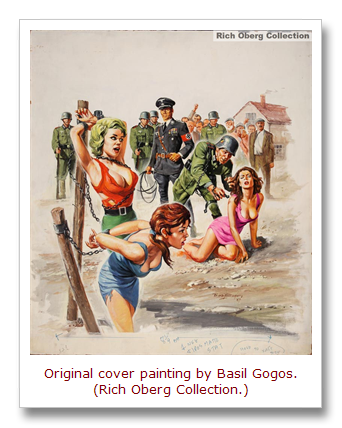 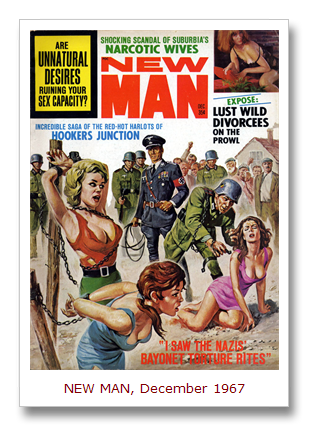 …and MAN’S BOOK, August 1967. (MAN’S BOOK was yet another another Ampolsk/Rosenfield sweat mag, published from March 1962 to September 1971.) 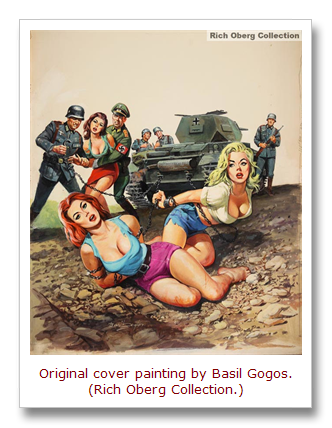 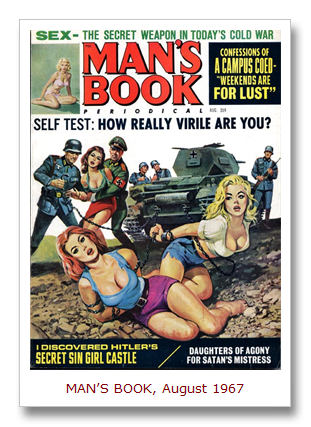 In case you’re not familiar with the legendary horror mag paintings by Basil Gogos, here are a few examples of his FAMOUS MONSTERS OF FILMLAND covers… 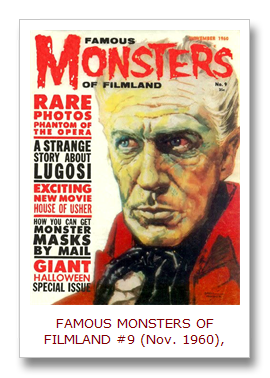 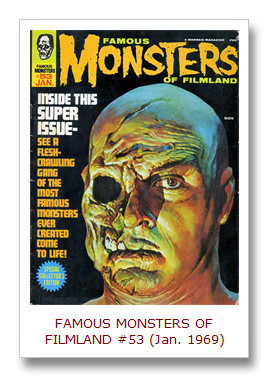 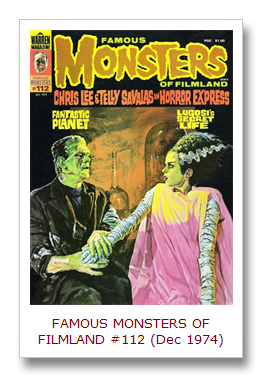 And, here are a couple of the cool album covers by Gogos: Rob Zombie’s Hellbilly Deluxe (1998) and Electric Frankenstein’s self-titled album (2005). 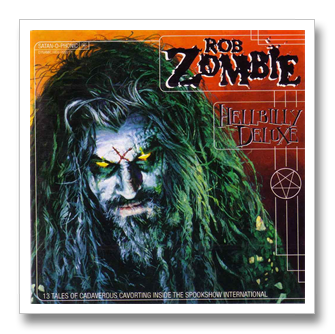 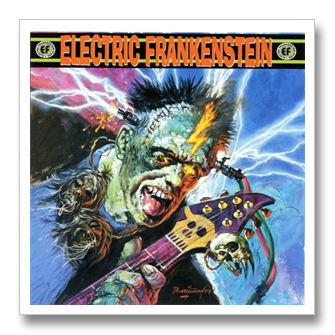 By the way, if you’re a fan of illustration art but haven’t seen Gammill and Spurlock’s book about Basil Gogos yet, do yourself a favor and buy it. It’s superb.

Some of the books on my recommended “must have” list…