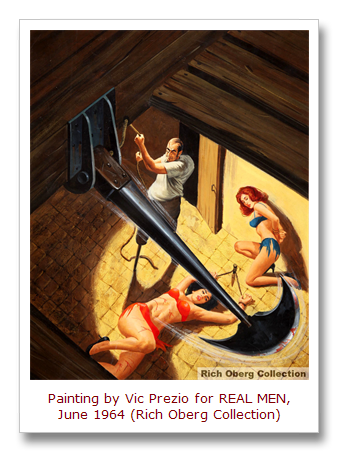 As explained in my previous post, men’s pulp art collector Rich Oberg and I recently put together an article about men’s adventure magazines that was published in the July/August 2011 issue of HORRORHOUND magazine.

The article is heavily illustrated and the layout looks great. But there wasn’t room to provide captions for all the covers and artwork it shows.

So, I’m providing info about the issues and artists featured in a series of posts here on this blog.

Today’s post provides info about the images on the second page of the article (page 45 in the magazine). 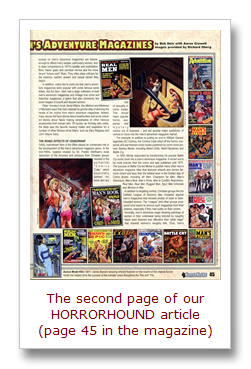 In the middle section of that page there are two original paintings from the Rich Oberg Collection, along with the covers they were used for.

The first painting, by artist Vic Prezio, looks like it could be a poster for a pulp sleaze version of Roger Corman’s 1961 film The Pit and the Pendulum.

It was used on the cover of the June 1964 issue of REAL MEN magazine.

The original painting below that was created by Basil Gogos for the March 1972 issue of MAN’S BOOK. (I featured it in a previous post here.)

In the 1950s and 1960s, Prezio and Gogos created cover paintings for both men’s pulp magazines and the classic horror magazines published by Warren: FAMOUS MONSTERS OF FILMLAND, CREEPY and EERIE.

James Bama is another artist who worked in both the men’s adventure and horror magazine genres. He also created some terrific paintings for the classic Aurora’s monster model kits that were popular in the 1960s.

A cropped image of Bama’s painting for the Aurora Bride of Frankenstein model box is at the bottom left corner of the second page of our HORRORHOUND article.

Below are photos of the top of the box and an assembled, unpainted model (from the cool Resin the Barbarian model fan site).

The cover next Frankie’s Bride in the HORRORHOUND article is the November 1973 issue of WORLD OF MEN. The cover painting is by Marty Ripoll for the story “TONIGHT SATAN CLAIMS HIS NAKED BRIDE.” (In my imagination, it’s a prequel to the campy William Shatner and Ernest Borgnine flick The Devils Rain.) 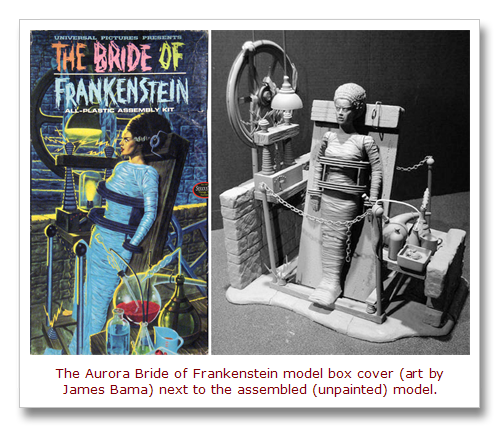 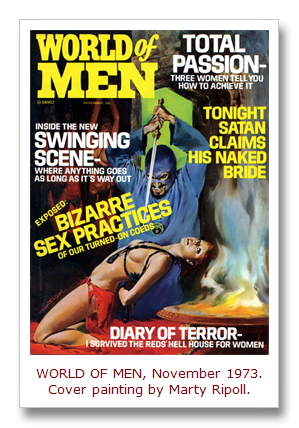 The next image in the bottom row of p. 45 is a classic Nazi bondage and torture cover: the October 1964 issue of MAN’S EPIC. The artist is uncredited, but it looks to me like it might have been painted by Norm Eastman, one of the grand masters of BDSM-themed “sweat magazine” subgenre of cover paintings.

To the right of that is an EXOTIC ADVENTURES cover that features a fantastic painting by artist Hugh Hirtle. (From the looks of the distressed damsel in that one, I’d guess Hugh is a fan of Bettie Page. But then, who isn’t?) 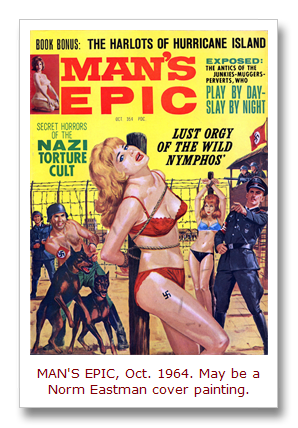 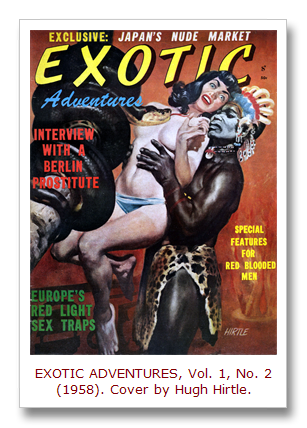 The next cover in the bottom row, showing a bug-eyed babe being lowered onto a bunch of presumably poisonous snakes, is the October 1950 issue CHAMPION FOR MEN. The cover painting was done by the great pulp illustrator Clarence Doore.

The March 1961 cover of BATTLE CRY that’s next to last in the bottom row features another painting by Vic Prezio. This one is pretty horrific, even by the politically-incorrect standards of men’s adventure magazines. It shows a Japanese soldier being fried alive by an American GI’s flamethrower.

Interestingly, this scene is somewhat similar to a cover used on one of the old BATTLE CRY comic books. Publisher Stanley Morse turned the BATTLE CRY comic into a men’s adventure magazine after the puritanical Comics Code was imposed in the 1950s and essentially banned violent images in comics. 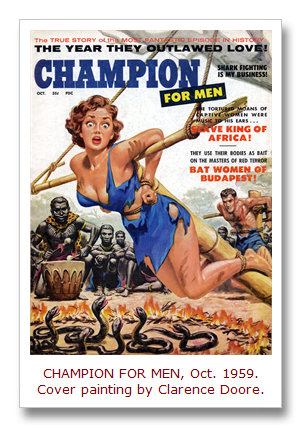 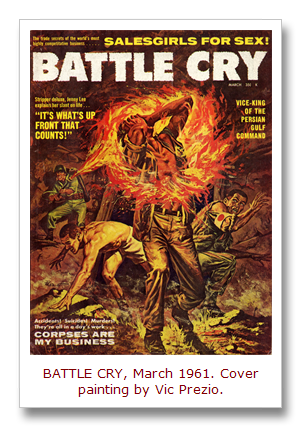 Looking at the images along the right hand margin of page 45, from the top down, the first one features a “Good Girl Art” painting by Basil Gogos. This classic GGA cover is the October 1965 issue of ADVENTURE magazine.

Below that is a terrific example of what I call the “bad biker” cover subgenre. It’s the August 1972 issue of MAN’S EPIC. The painting is by Norm Eastman.

Evil motorcycle gang members are common on covers and in stories in men’s adventure magazines published in the late 1960s and early 1970s. Often, they are depicted wearing Nazi insignia, as some bikers did in real life (though perhaps not as often as they did on the covers of men’s pulp mags or the low-budget outlaw biker movies that were popular in the ‘60s and ‘70s). 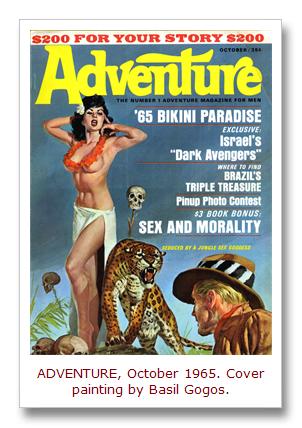 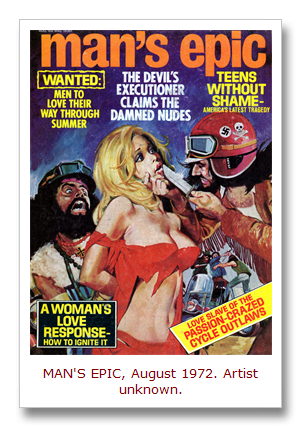 Norm Eastman also painted the over-the-top scene on the next cover down, the March 1965 issue of MAN’S STORY: a demented Nazi officer preparing to burn the flesh off the face of a scantily-clad woman, while his henchman carries away his previous victim in the background.

Below that is the August 1966 issue of MAN’S ADVENTURE, which shows two women are getting some payback by carving a swastika on the chest of a Nazi officer. The artist is uncredited, but looks like it might be another Vic Prezio painting. 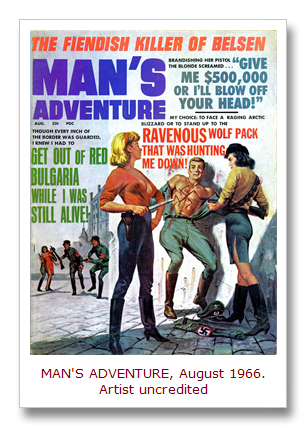 The Nazi bastards are back in control in the second to last cover at the right of page 45. It’s WORLD OF MEN, October 1964, featuring a cover painting by the great and prolific illustration artist Walter Popp.

The cover at the bottom right hand corner of the page is the November 1962 issue of MAN’S ACTION. It features another Norm Eastman painting. But in this one, the tormentors of the scantily-clad damsels are bloodthirsty natives instead of Nazis. 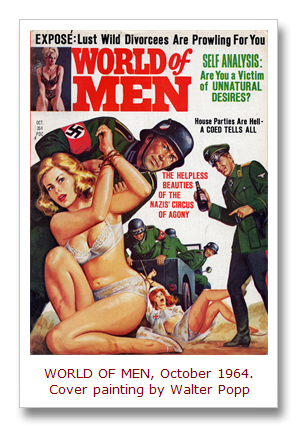 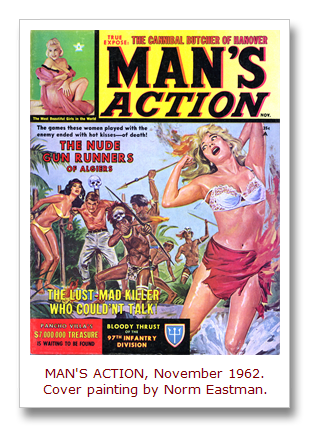 In upcoming posts, I’ll provide info on the rest of the images he provided for our HORRORHOUND article.

Thanks to Rich Oberg, as always, for sharing photos of covers and paintings from his amazing collection.