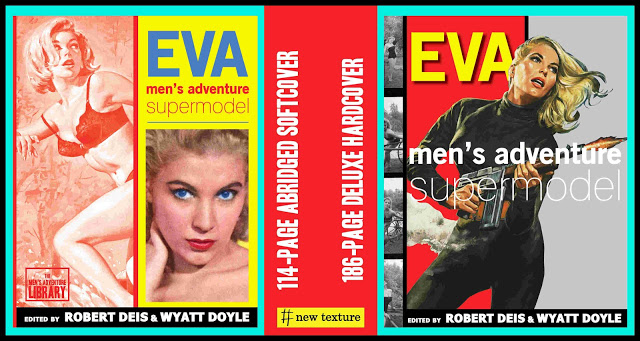 Wyatt Doyle and I are pleased and proud to announce the release of the 10th book in our Men’s Adventure Library series – EVA: MEN’S ADVENTURE SUPERMODEL.

It’s a lushly-illustrated book that showcases the unique career of the blonde Swedish model and actress Eva Lynd, with text written by Eva herself or taken from conversations we’ve had with her.

I’ve done series of previous posts about Eva on this blog.

But she is especially well known to fans of men’s adventure magazine (MAMs) as the model for scores of MAM cover paintings and interior illustrations.

Eva is a bonafide Swedish Countess, the daughter of Count Asti von Fielitz and Countess Margareta von Fielitz, who was a popular singer in Europe.

Eva’s mother brought Eva to America in 1950 at age 12. Her birth name was Eva Inga Margareta von Fielitz. She began using the name Eva Lynd shortly after she began her career as a model and actress.

Starting in the 1950s, she went from being a teenage beauty queen in New York City to becoming one of the top pinup photo models in the country. 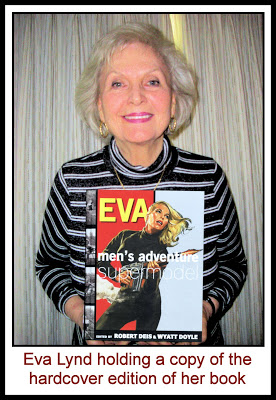 Millions of men saw photographs of Eva taken by the best “glamour girl” photographers of the era in dozens of different bachelor magazines published in the ‘50s and ‘60s.

She was also a popular artist’s model for paperback covers and illustrations done for magazines in the men’s adventure genre that flourished in those decades.

In fact, Eva is the best-known female MAM model. I view her as the female counterpart to the famous paperback and MAM artist’s model Steve Holland, who Eva often modeled with for reference photos taken by the well-known illustration artists Al Rossi and Norm Eastman.

In some MAM artwork, Eva was the model for scantily-clad damsels-in-distress being tormented by Nazis, Commies, bikers and other villains.

In some, she was the model for badass women who are fighting the bad guys, like the one featured on the cover of EVA: MEN’S ADVENTURE SUPERMODEL.

Millions of women also saw photos of Eva. They saw her in images used for covers and story illustrations by the romance, detective, “true crime” and confession magazines that were also popular in the ‘50s and ‘60s.

Millions of Americans of both sexes saw Eva on TV and in movies in those decades.

She got her start as an actress in popular comedy and variety television shows produced in New York, like THE STEVE ALLEN SHOW, THE GARRY MOORE SHOW, THE PERRY COMO SHOW, THE JONATHAN WINTERS SHOW, and The Producer’s Showcase special, FESTIVAL OF MAGIC, hosted by Ernie Kovacs. 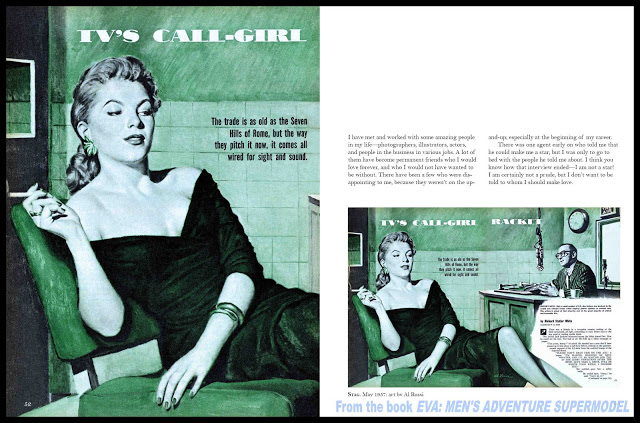 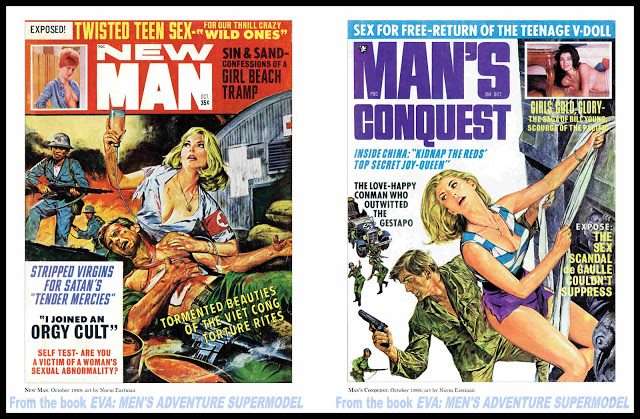 She had a small role in the cult horror movie THE HYPNOTIC EYE in 1960, and a lead role in the 1975 caper film, THAT LADY FROM PEKING, which also starred Carl Betz, Nancy Kwan, Bobby Rydell and Sid Melton.

One of her most-seen roles was as the sexy woman who emerges from the tube in Brylcreem’s “Girl the Tube” TV commercial, which ENTERTAINMENT MAGAZINE named of the “50 Best Commercials of All Time.” 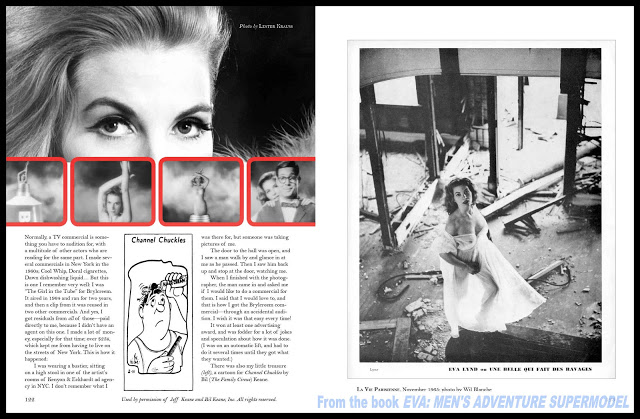 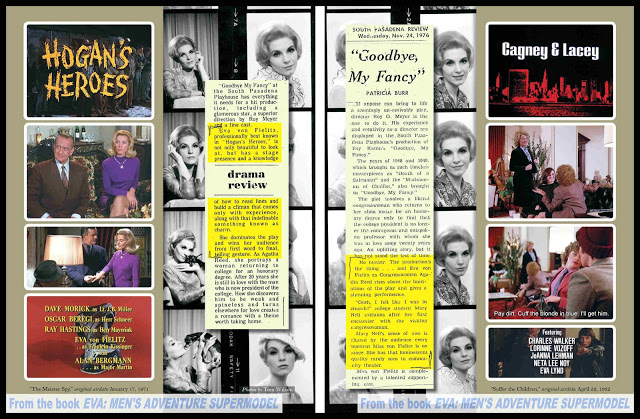 Eva has also acted in many plays, been a showgirl in pre-Castro Cuba, a singer, and a jewelry designer.

More recently, her photo from a 1957 Kentucky Club tobacco ad in PLAYBOY, was reused by pop artist Anne Taintor as an image featured on Anne Taintor purses, cosmetic bags and other merchandise.

Eva is now 82 and living in Los Angeles with her husband of over 40 years, Warren Munson, a veteran actor who has appeared in numerous TV shows, movies and commercials. Eva and Warren both still act occasionally and sometimes work together, as they did in a recent Campbell’s Soup commercial in which they played grandparents. 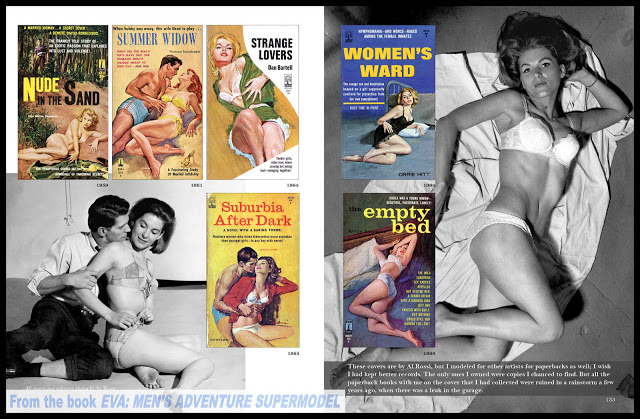 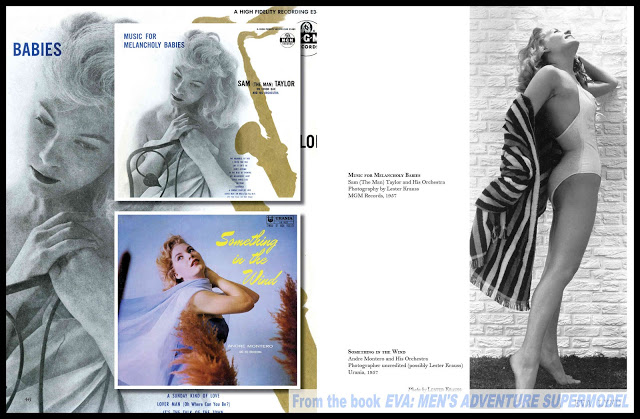 Her book EVA: MEN’S ADVENTURE SUPERMODEL is the latest reflection of her rediscovery by modern fans of vintage men’s bachelor and adventure magazines.

If you Google “Eva Lynd,” you’ll find posts featuring photos and artwork she modeled for appear on many websites, blogs and Facebook posts.

On eBay, descriptions of vintage magazines she appeared in use her name as a lure for buyers and original transparencies and negatives from the estates of top glamour girl photographers who used her as a model sell for big bucks. 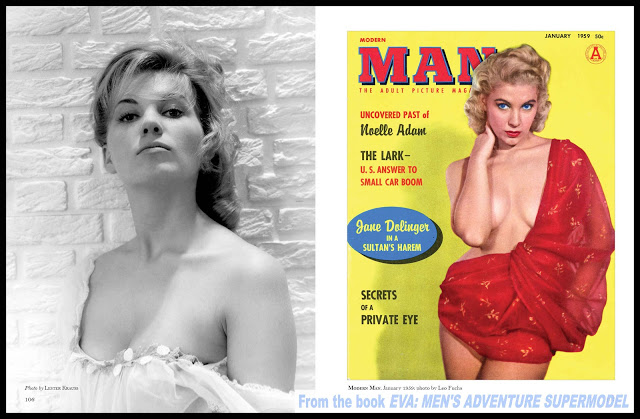 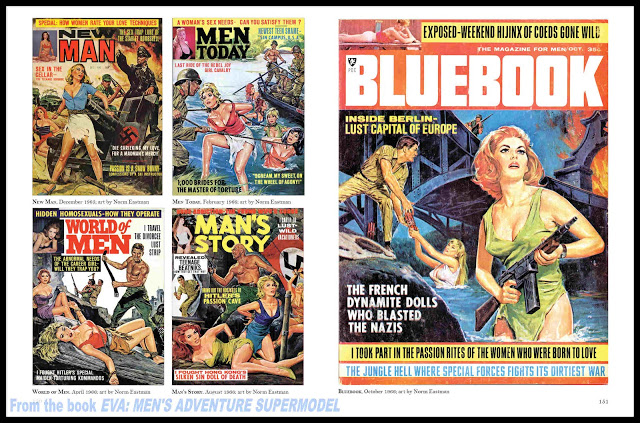 “Several years ago, I decided to Google ‘Eva Lynd’ to see what was out there about me,” she explained. “I was surprised by how many sites had photos and artwork I modeled for. One of them was on MensPulpMags.com, a blog about men’s adventure magazines written by Bob Deis. Bob has one of the largest collections of men’s adventure magazines in the country and publishes books featuring stories and artwork from them with his publishing partner Wyatt Doyle, head of the New Texture imprint. Bob knew I was a favorite model of two of the top artists who worked for that genre, Al Rossi and Norm Eastman. In a post he did about me, he ended it by saying he didn’t know if I was still alive.” 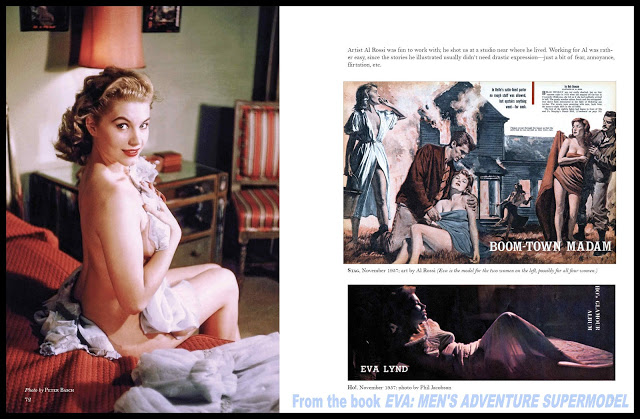 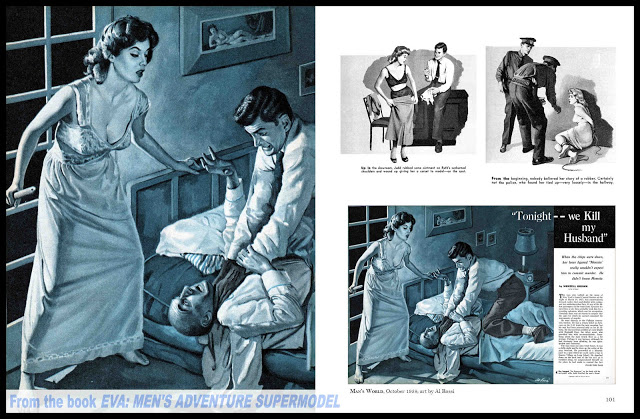 “I emailed him to tell him I was very much still alive,” Eva recalled. “He did some interviews with me by phone and we soon became friends. After he learned that I had a huge archive of photos and artwork I modeled for, news clippings about me and other memorabilia, he and Wyatt asked if they could publish a book about me, as part of their Men’s Adventure Library series. I said ‘yes.’ Then we worked together for several years to put all the pieces together. In addition to all the material I had, Bob provided hundreds of scans of pinup photos and artwork I modeled for from the magazines in his collection. Wyatt pieced together information from emails and phone calls the three of us shared, and used what I wrote or told them in phone calls as the text for the book, so my story is told in my own words and I am credited as the author.” 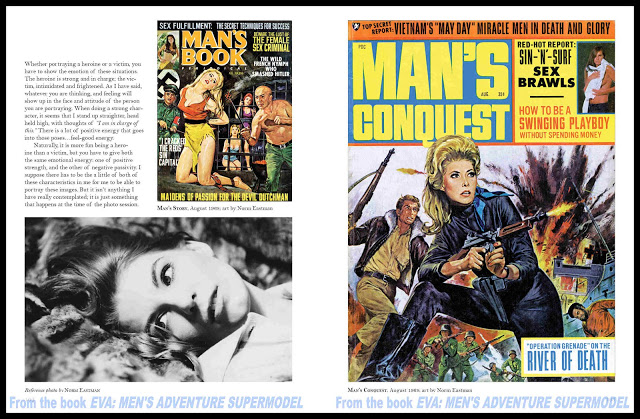 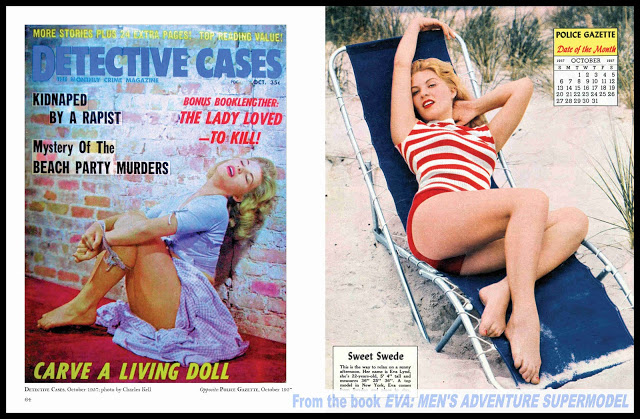 “I have totally loved working on this project,” Eva said, “and even though it was just recently released, it has already received some great reviews.”

Thanks, Eva! Wyatt and I totally loved working with you on the book!

EVA: MEN’S ADVENTURE SUPERMODEL is available in hardcover and softcover editions on Amazon in the US and worldwide, Barnes & Noble and other online sellers or directly from me on eBay. Both editions feature hundreds of photos and artwork Eva modeled for. The hardcover has extra bonus content that’s not in the paperback. Our Men’s Adventure Library books are also available via The Book Depository site, which offers free shipping worldwide. 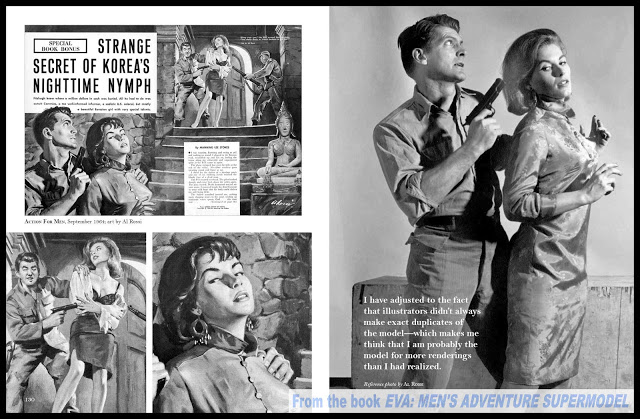 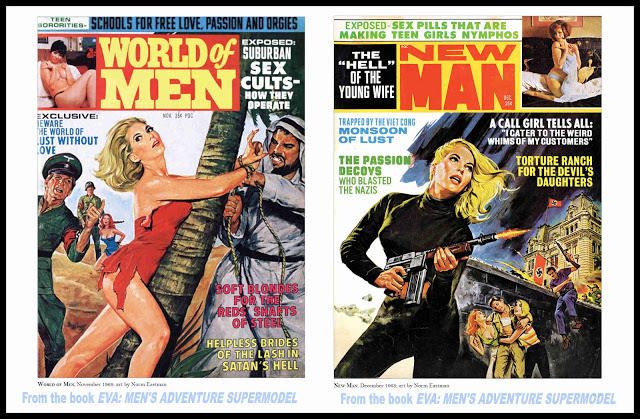 An extensive flip-page preview of EVA: MEN’S ADVENTURE SUPERMODEL is available on Issuu.com at this link.

For more information about the book, or to arrange an interview with Eva Lynd, contact me via email at BobDeis@yahoo.com.

CLICK THE IMAGE BELOW TO SEE A 40-PAGE PREVIEW OF EVA: MEN’S ADVENTURE SUPERMODEL 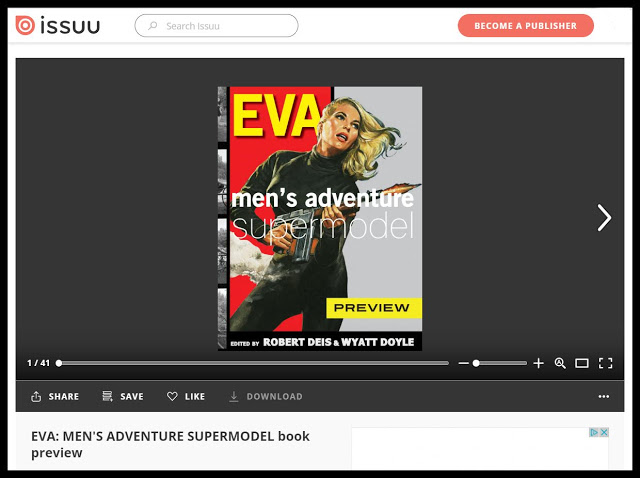