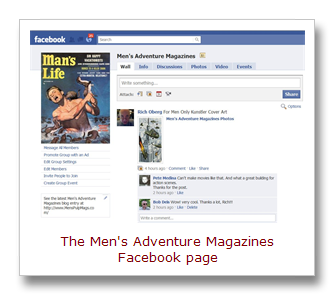 Some months ago, as an experiment, I created a Men’s Adventure Magazines page on Facebook to go with this blog.

I wanted to try it out as an alternative to having comments on the blog, because commenting on Facebook is easier and it allows people to post photos and images — such as magazine cover scans and artwork.

I wasn’t sure what would happen.

But, to my happy surprise, the Facebook page has attracted quite a few readers of the blog and generated a number of interesting discussions.

The other day, for example, a knowledgeable collector of men’s pulp mags named Pete Medina put a post on the Facebook page asking for help in finding a particular magazine cover.

He was intrigued by an original Mort Kunstler cover painting featured in the great book about men’s adventure mags, It’s a Man’s World, and wanted to know if anyone could post a cover scan of the magazine the painting was used for.

The Kunstler painting Pete described (on page 227 of the book) shows a wild helicopter battle above the Empire State Building.

It was used on the August 1970 issue of For Men Only, for the featured fiction story inside titled “THE DAY THEY CAPTURED THE EMPIRE STATE BUILDING.”

I don’t own that issue anymore, but I do have JPEG of the cover.

So, I posted it on the Facebook page in response to Pete’s query.

Not long after that, American Art Archives founder Thomas Clement chimed in.

As noted in the previous entry on this blog, Thomas and his wife Christiane are collectors and sellers of — and experts on — vintage magazines, including men’s adventure mags.

Thomas added to the Facebook discussion by posting a JPEG of the interior illustration used for the Empire State Building story, noting that it was done by artist Bruce Minney.

Rich is literally the world’s biggest collector of the original artwork used for men’s adventure magazines published in the 1950s, 1960s and early 1970s.

One of the paintings he owns is the original Mort Kunstler painting used for the August 1970 issue of For Men Only. So, Rich posted a high resolution photo of that painting on the Facebook page.

That series of interactions with other fans and experts is the kind of thing I was hoping would happen when I created the Facebook page. And, for me, it’s great fun. 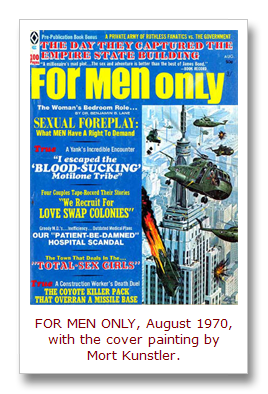 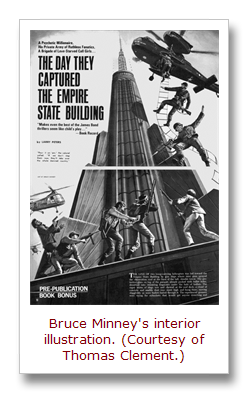 If you like this blog but haven’t visited the Facebook page yet, check it out. You might enjoy it, too. And, you never know who will drop by.

In addition to the folks mentioned above, some of the other notable people who have joined in discussions on the Facebook page include: veteran men’s adventure magazine writer Robert F. Dorr; the comics and magazine expert and co-author of the book Men’s Adventure Magazines, George Hagenauer; the talented writer and musician Josh Alan Friedman, who (among many other things) was a key contributor to the book It’s a Man’s World; and, author and publisher Wyatt Doyle, whose New Texture company published Josh Alan’s new book, Black Cracker.

To check it out and join in, click this link to the Men’s Adventure Magazine Facebook page.