I first ran across the American Art Archives website about a year ago, when I was looking for some online information about Robert E. Schulz, one of the many great but little-known illustrators who provided cover and interior art for men’s adventure magazines.

American Art Archives was one of the few sites I could find that has both biographical info and examples of the covers and interior illustrations by artists who worked for men’s pulp mags and other vintage magazine genres.

Then I realized it was the same “American Art Archives” that has an eBay store. (Online here.)

In fact, many of the best quality copies of the old men’s adventure magazines I’ve bought on eBay have come from American Art Archives. So, I am a fan on both counts.

Recently, I decided it was time for me to track down the creator of American Art Archives, Thomas Clement, and ask him to do an interview.

He obliged, but turned the tables and asked me some questions, too.

So, it ultimately became a conversation. And, it ended up including Thomas’ wife Christiane, who works with him on their American Art Archives endeavors, as well as their language translation service, NOW Translations.

Here’s some of what we discussed…

BOB: Thomas, Christiane, let me start by asking if you have any advice for people who want to collect men’s adventure magazines or other vintage magazines.

THOMAS: Collect what you love and don’t do it to make money. Do it because it’s something that — even if no one else ever wants it — you do.

CHRISTIANE: Try to find a theme or particular artists you want to collect and build your collection that way. Keep what you get in the best condition possible, and know that you’re archiving for future generations.

THOMAS: That’s true. Little still survives of these magazines and there’s even fewer of the original paintings. Only a few of the vintage magazine and comics artists are still with us. Frank Frazetta got some press when he died, but I didn’t see anything on Ernest Chiriaka when he passed away recently, and that’s the norm. These great talents are already forgotten by the mainstream media and its up to the fans to keep the artists’ memories alive. Do you have any tips, Bob? 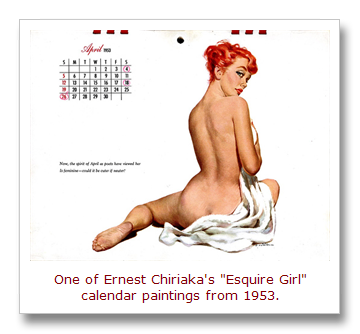 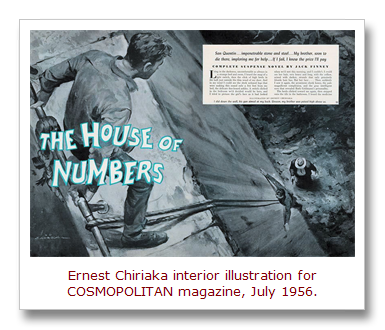 BOB: I have two for people who are looking for particular men’s adventure magazines or artists. One is to use eBay’s “saved searches” feature, with the email alert option. That will let you know when something you’re looking for comes up for sale on eBay. My other tip is to check for a title or issue you’re looking for on the David T. Alexander “Culture and Thrills” website. The prices are on the high side compared to average prices on eBay, but Alexander’s often has some of the rarest titles and the quality of their issues is always excellent. 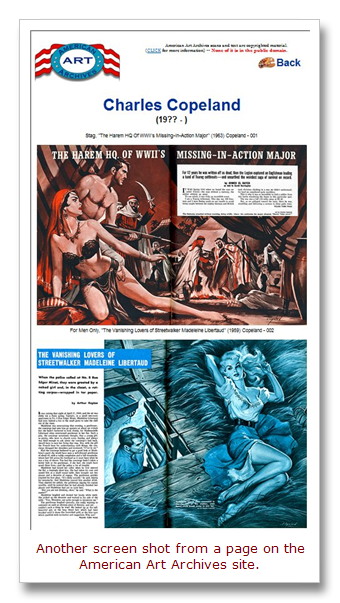 THOMAS: Prices for men’s adventure magazines are like any vintage items. If it’s rare or if two or more people absolutely have to have it and bid against each other on eBay, then a single magazine can go for $100 to $150.

CHRISTIANE: A lot of men’s magazines on eBay that are not really rare or in good condition are priced ridiculously high. Unless someone thinks one of them is a “must-have issue” for some reason, those overpriced magazines will be sitting on the eBay cyber shelves for a long time.

THOMAS: I think $10 for an issue in good condition is a solid deal. If someone is thinking of collecting these great magazines, then it’s an affordable collectible, at least for now.

BOB: Before eBay was big, Bill Devine, author of the now out-of-print Devine’s Guide to Men’s Adventure Magazines, estimated that about 99% percent of the men’s adventure magazines that were published have been trashed, burned or destroyed and only about 1% of those that survived are up for sale at any given time. Do you think that’s still a good guesstimate?

THOMAS: It’s probably not far off. Maybe I could be hopeful and guess it up to 5%, but that’s a stretch. For most people, magazines are heavy, take up space, and once you’ve read them, they’re trash or something for the children to cut up with scissors of for you to use as a coaster. This is true for mainstream magazines like The Saturday Evening Post, Collier’s, Liberty, etc., too. But those sold in the millions. Most of the men’s adventure mags only sold in the thousands.

BOB: What are some of your favorite men’s adventure mags?

THOMAS: There’s a number of them that had excellent art: Argosy and True were a source of awesome art. Stag, For Men Only, Men, Saga would be the second tier, not because of quality of the illustrations, but because they didn’t have the same advertising cache as True and Argosy. I think what appeals is the whole idea of these mags which could be summed up in titles like, “I Was The One-Man Leader Of The Secret Harem of She-Wolf Biker Chicks.” The artwork was fantastic, with beautiful women in danger of being turned into gold statues just as the hero breaks through the door to mow the bad guys down with his Tommy Gun. What about you? 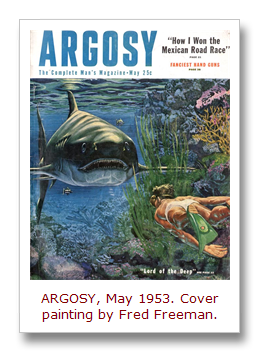 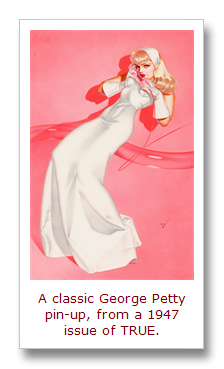 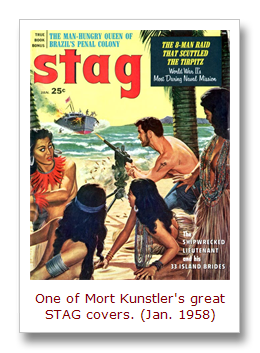 BOB: I have a great fondness for publisher Martin Goodman’s Magazine Management/Atlas-Diamond magazines, such as Action for Men, For Men Only, Male, Men and the pre-Seventies issues of Stag. They epitomize what I view as the classic men’s adventure magazines, which are wilder than True and Argosy but not quite as gonzo as the subgenre that focused on bondage and torture style covers and stories, and generated the nickname “the sweat magazines.” Of course, I like those “sweat mags” too, especially the ones that often featured cover paintings by Norm Eastman, like Man’s Story and World of Men.

CHRISTIANE: What is interesting is that people collect and pay good money for these magazines for different reasons. Bondage covers always seem to do well. Some will buy a magazine at any cost if they own an original illustration featured in the magazine, or they are interested in a particular pinup model or starlet. You never know what might drive up the price. And some people just like certain illustrators and snap up any magazine they’re found in. 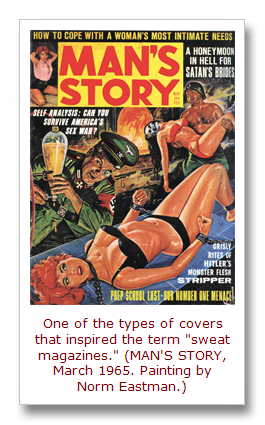 THOMAS: By the way, I don’t like the term “sweats” referring to the men’s adventure mags, do you?

BOB: I think “sweat magazines” sounds a bit demeaning and doesn’t seem like an accurate term for the whole genre. A while ago I did a post about this debate over terminology, which noted that some people do use the term “sweats” lovingly. And, it does seem appropriate for some titles. But people I’ve talked to who wrote stories for the classic magazines in the genre, like Harlan Ellison and Robert F. Dorr, have told me they never heard the term “sweats” used back then. “Men’s adventure magazines” is probably a better fit and is the term that’s used most often. But I also like the term “men’s pulp magazines,” which reflects some of the similarities and ties between the men’s adventure genre, the classic pulp magazines, the “true crime” and scandal pulp mags and the vintage pulp paperbacks. I think the name “men’s pulp magazines” can be traced to Adam Parfrey’s great book It’s a Man’s World, which helped spark renewed interest in the genre when it was published in 2003.

THOMAS: Yes, that’s one of two great books about men’s adventure mags. Of course, the other one is Men’s Adventure Magazines: In Postwar America, which features the Rich Oberg collection.

BOB: Agreed. I love both those books. What are some of the websites and books you’d recommend to people who want to learn more about vintage magazines and illustration art, besides your own?

THOMAS: Well, naturally, your site is one. Another is David Saunders’ great Pulp Artists site. Leif Peng’s Today’s Inspiration is also excellent as is David Apatoff’s Illustration Art. Walt Reed’s book The Illustrator in America is a must for serious fans of illustration. And, when it comes to illustration art, you can’t go wrong with Illustration Magazine. It’s amazing. 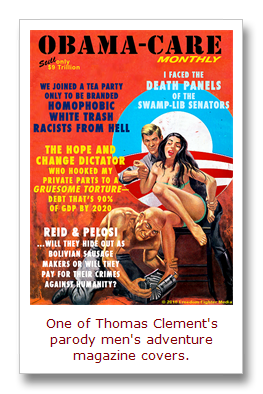 BOB: I noticed that one of your more recent online endeavors, your Freedom Fighter Media site, has some great parody magazine covers combined with political commentary. What kind of response are you getting to that site?

THOMAS: Freedom Fighter Media has only been going since March and most of the comments are: “Hey, I love what you did with that cover.” I hope that soon they’ll comment more on the writing. But I have to say those cover re-do’s are fun. Sometimes I leave the art alone, like the Norman Mingo Mad magazine cover I used in a post about the ubiquitous Muslim death threats over depictions of Muhammad. Another recent article you and other fans of illustration art can appreciate is one I did about someone dissing Norman Rockwell and his “illustrations.” The art snobs drive me up a wall.

BOB: You also recently published the political humor book Liberalese, which I think is very witty and funny, even though you’d probably view me as one of the Liberals it spoofs. Is that book an outgrowth of your Freedom Fighter site?

THOMAS: They’re related. The site is meant to help promote the book and I’m writing weekly articles to help do that. The nice thing is that since I’m the writer and publisher of the site, I can pick any artwork I like to illustrate the article. I recently reworked a Wally Wood cover.

BOB: Well, thanks for talking with me Thomas and Christiane. I enjoyed it. I would also say thanks for all the great magazines I bought from you on eBay, but my wife told me to tell you she thinks I spend way too much on my “little hobby.” (Sorry, honey. I’m hooked.)