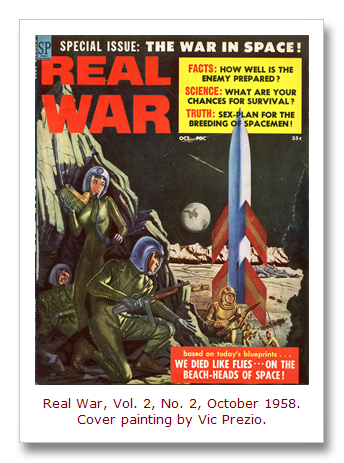 Occasionally, some of the men’s adventure magazines of the 1950s and 1960s would put out special issues that had a theme.

For example, a while ago, I posted an entry about the premiere issue of Mr. America magazine, published in January 1953, which focused on the coming “Atomic Future.”

Real War was one of many classic men’s pulp mags published by Stanley Publications, a New York-based company owned by the notorious comics and magazine publisher Stanley Morse.

It was promoted as “A Magazine Devoted to the Interests of Fighting Men, Everywhere.”

Real War’s special October ‘58 issue was built around the theme “THE WAR IN SPACE!” It features some great artwork and stories about America’s expected future battles with evil Communist powers.

The glorious science fiction-style cover was done by Vic Prezio, a talented illustrator who provided cover and interior artwork for many men’s adventure magazines, as well as for horror mags like Famous Monsters of Filmland, comics and pulp paperbacks. 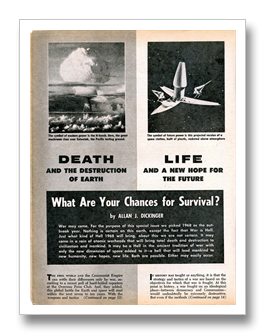 The two-part article “What Are Your Chances for Survival?” postulates two potential futures.

One is a nuclear war between “the Free World and the Communist Empire” in which “sixty to seventy million dead may be expected” during the first month alone.

“Women will be selling themselves for an apple — if it isn’t radioactive — and quiet little accountants will be murdering for a bottle of uncontaminated cola…Sardines and powdered milk will win the shapeliest starlets, and society girls will abandon luxurious country estates to move into a culvert with a man who has a can of Spam.”

The other possible future avoids nuclear Armageddon and leads to a more peaceful space race with the Commies. (I’m not sure which scenario sounded better to readers of Real War.) 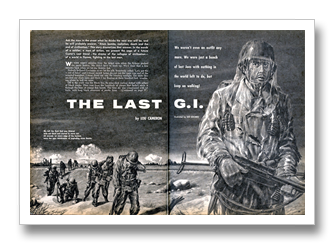 “THE LAST G.I.” is an excellent but grim science fiction war story about a group of American soldiers struggling to survive in the middle of a nuclear battlefield.

It features a superb two-page illustration by Sid Shores (aka Syd or Sydney Shores), another fine illustrator of the era known for both his magazine and comic art.

Shores is probably most famous for his work on the “Golden Age” Captain America comics in the 1940s. But he continued to do pencil and ink work for Marvel Comics through the 1960s, as well as covers and interior illustrations for men’s adventure magazines.

The author of “THE LAST G.I.”, Lou Cameron, was a comics illustrator himself for a while in the 1950s. He went on to become a very successful and incredibly prolific novelist, writing well over 100 (maybe 200) mystery, suspense, action and adventure novels, noir-style pulps and Westerns, under his own name and several pseudonyms. Cameron is best known today for his gritty, adult Western novels. He’s the creator of the the Stringer series and wrote many of the books in the popular Longarm series, as Tabor Evans. As Ramsay Thorne, he wrote the spicy Renegade series, featuring the character Richard Walker, a soldier-of-fortune nicknamed “Captain Gringo.” 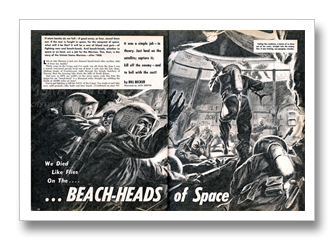 “WE DIED LIKE FLIES ON THE BEACH-HEADS OF SPACE” is another bloody sci-fi battle yarn. The “beach-head” in this case is a Commie space station, which American space marines are trying to take. This story is credited to Bill Becker. And, although it’s fiction, I think it’s by the journalist Bill Becker, who wrote many articles for the New York Times about nuclear weapons tests in the 1950s.

One of the wildest stories in the October 1958 issue of Real War is “The Sex Plan for the Breeding of Spacemen.” 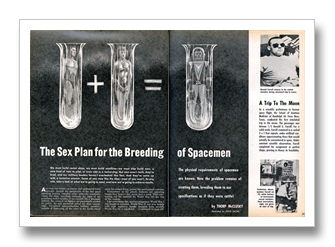 It explains how the men and women needed for space travel and wars in space will require certain physical and psychological characteristics, such as “ability to withstand extremely rapid acceleration and deceleration” and “reduced size and weight.” So, American military leaders were already planning on “breeding them like cattle” using selective breeding techniques and high technology.

Fans of pre-World War II pulp magazines might recognize the name of the author of this piece — Thorp McCluskey.

McCluskey started out writing for horror pulps like Weird Tales and his old stories have been included in a number of more recent horror pulp anthologies. His yarn “While Zombies Walked” from the September 1939 Weird Tales is said to have been the basis for the 1943 film Revenge of the Zombies with John Carradine, Gale Storm and Bob Steele. And McCluskey’s description of decaying zombies in that story sound a lot like they look in the Romero Living Dead movies. 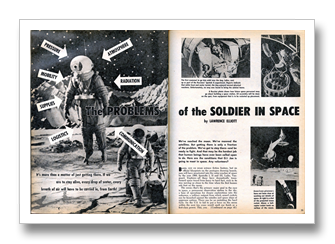 Another story in the “War in Space” issue of Real War focused on “The PROBLEMS of the  SOLDIER IN SPACE.”

You know, problems like “What sort of battle tactics will our forces employ on the moon?” And, more importantly, how will our soldiers in space endure “without recreation or women?”

As explained by writer Lawrence Elliott

(who later became a regular contributor to Reader’s Digest and authored a series of biographies about famous people):

“One solution is now being trial-ballooned to the dominant question — man’s sex drive, which can’t just be shut off without inviting mass homosexuality or worse. What is it? Simply to send women along with men to the moon. Here again, the problems are many — both social and logistical — but it may well be that this answer is the only one if we’re to win the battle for space.” 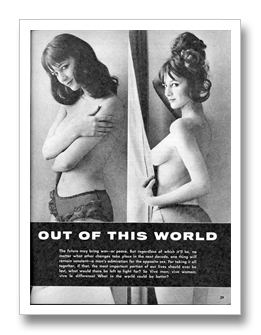 Meanwhile, back on earth, no issue of a men’s adventure magazine was complete without some cheesecake photos. In the “War in Space” issue of Real War, there’s an eye-catching spread titled “OUT OF THIS WORLD.”

A blurb under the photos tells us:

“The future may bring war — or peace. But regardless of which it’ll be, no matter what other changes take place in the next decades, one thing will remain constant — a man’s admiration for the opposite sex. For taking it all together, if that, the most important portion of our lives should ever be lost, what would there be left to fight for?”

Does that mean that if there were nothing left to fight for, there might be peace — but we’d all be gay?