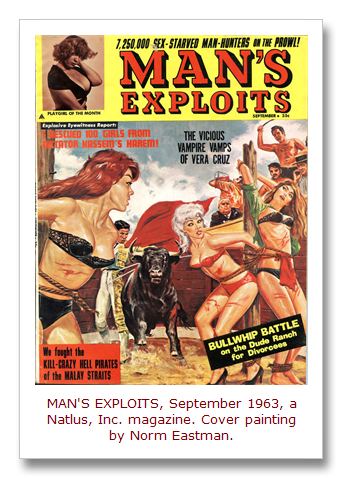 Dr. Earle teaches courses in modernist literature at the University of West Florida and is the author of All Man! Hemingway, 1950s Men’s Magazines, and the Masculine Persona. 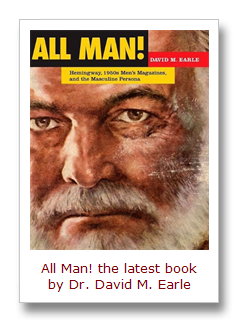 It’s also among the books I consider a must-read for anyone interested in vintage men’s magazines.

One of Dr. Earle’s Facebook posts about men’s mags and bullfighting noted:

“1950s popular culture was downright tauromaniacal, or crazy for the bullfight. And why not, it was the perfect blending of machismo, exoticism, and aficionado posture – all of which were central to the glorification of bachelor identity in mid-century America. In this sense, we can see the bullfight in the same light as the fascination for primitivism in tiki-culture and exotica music of Martin Denny and Esquivel.”

Earle’s series of bullfight posts reminded me of one of my own favorite bullfight-related covers from a men’s adventure magazine — the September 1963 issue of Man’s Exploits (Vol. 2, No. 4). The artist is uncredited and there’s no signature, but men’s adventure art expert Rich Oberg confirmed to me that the cover painting is by Norm Eastman. 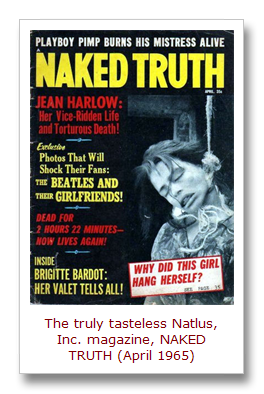 The bloody babes in bondage on the September ‘63 cover of Man’s Exploits —  plus the fact that the contents page doesn’t even list any editors — suggests that it may have been an “under the counter” (UTC) magazine.

Indeed, some of the Natlus, Inc. magazines tended to be on the sleaziest, most sensationalistic and most misogynistic end of the magazine spectrum in the Sixties. (Check out the truly tasteless cover of the 1965 Natlus mag Naked Truth shown at right).

As wild as the artwork and stories may be in Man’s Exploits, its cheesecake photo spreads are relatively tame, as they were in most men’s adventure magazines of the 1950s and 1960s. 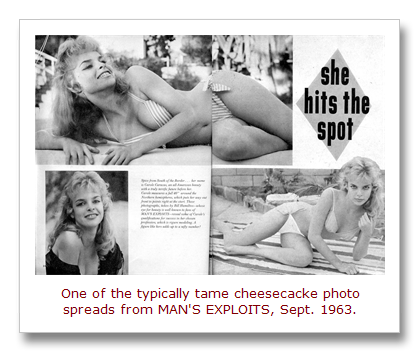 Women’s nipples or pubic hair were not usually shown in most men’s pulp mag photos of that era, and were often painted over with faux pasties or undies if they were visible in the original pictures.

Ironically, that’s one of the reasons why the genre faded away in the 1970s.

The men’s adventure magazines couldn’t compete for men’s attention with the increasingly anatomical, glossy photographs in the men’s slick magazines, like Playboy, Hustler, Penthouse and Oui — let alone with the flood of true pornographic magazines that became increasingly available in the Seventies.

In the next post, we’ll take a look inside the September 1963 issue of Man’s Exploits.

It has some incredibly over-the-top stories and art, plus some full-page cartoons by the famous cartoon artist Bill Ward, master of “Good Girl Art” (GGA) and creator of the legendary, sexy comics character Torchy.