During my recent interview with Dr. David M. Earle, the author of All Man! (the excellent new book about Ernest Hemingway and 1950s men’s magazines), I asked him if he had any favorite men’s adventure magazines.

He mentioned several, including one that is a true gonzo classic.

The learned professor of literature and expert on vintage magazines is a fan of killer monkey covers. He told me: “I of course love magazines like the August 1953 issue of Male, which features ‘Monkey Madness’ — three guys in a life raft being attacked by hundreds of monkeys. It’s just so ludicrous.” 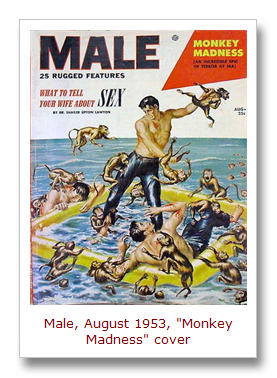 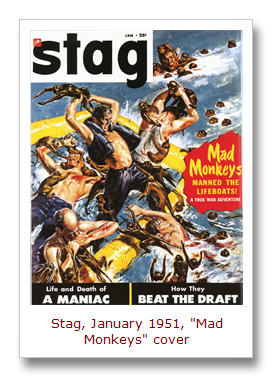 I’m a fan of that “Monkey Madness” cover, too.

But as I mentioned to David, it’s actually a bit of artistic plagiarism. It’s essentially a rip-off of the cover art on the January 1951 issue of Stag, done for the story “Mad Monkeys Manned the Lifeboats!” (which is billed as a “A True War Adventure.”) 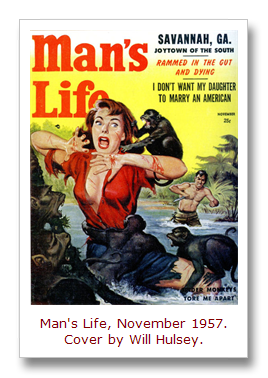 My own personal favorite killer monkeys cover was done by Will Hulsey, for the November 1957 issue Man’s Life.

Hulsey was a master of killer creature art. He painted the famed “Weasels Ripped My Flesh” cover and many like it, including the covers with the vicious flying squirrels and turtles in the banner at the top of this blog.

His take on crazed, killer monkeys was done for the story titled “SPIDER MONKEYS TORE ME APART.”

It one-ups the Male and Stag covers by adding a quintessential men’s adventure magazine element — a beautiful, busty, bleeding babe with a torn bodice.

As usual in Hulsey paintings, the distressed damsel is wearing what’s left of an eye-catching red blouse, guaranteed to stand out on the racks of 1950s newsstands.

Of course, as David Earle said, the idea of an attack by fiendish little monkeys is pretty ludicrous.

But how about baboons? Baboon attacks on humans do occur, and they are sometimes fatal. So, the idea of killer baboons is not so blatantly silly. And, killer baboons are somehow cooler than killer monkeys.

One of the best baboon attack paintings is on the cover of the May 1955 issue of Men magazine. It was done by the legendary artist Mort Kunstler, who is now best known for his civil war paintings.

Another outstanding baboon cover was created for the September 1957 issue of Man’s Action by Mort Engle, who also did great cover art for pulp paperbacks, like the Pyramid edition of The Insidious Doctor Fu-Manchu (1961). 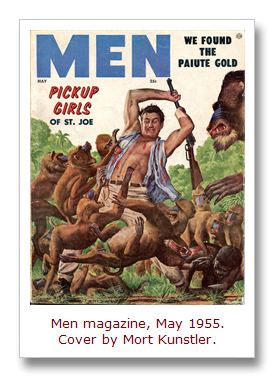 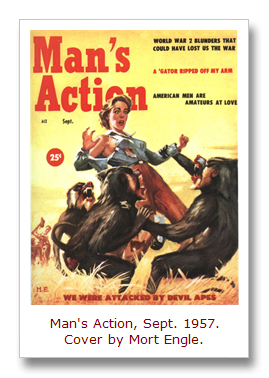 Although little killer monkeys may be laughable, baboons have seemed scary to me ever since I saw the movie Sands of the Kalahari as a teenager back in 1965. If you haven’t seen that classic man vs. baboon film, you definitely should. (Someone recently posted it on YouTube.)

It has a great cast that includes Stuart Whitman, Stanley Baker, Susannah York and Theodore Bikel. And, the over-the-top story could have been ripped from the pages of a men’s pulp mag, though it’s actually based on a novel by William Mulvihill (which I also highly recommend).

Of course, in the book and the movie — as in real life — the creature that is ultimately the scariest and deadliest member of the simian family tree is “the naked ape.” 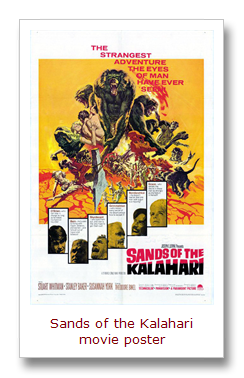 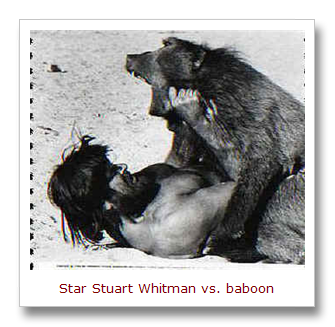